I was raised in the river, patching inner tubes for runs down the Oconaluftee and procuring crayfish for my brother to cook in the break-room microwave of our parents’ store. In 1977, my parents, Charlie and Carol Saunooke, opened Saunooke’s Mill and Shop, situated on the only river in Cherokee.

Saunooke’s Mill was built on land that originally belonged to my grandfather, Chief Osley Bird Saunooke. By 1975, 10 years after his death, the land, located near the scenic entrance to Great Smoky Mountains National Park, lay relatively dormant.

My father had a parcel of the land and purchased another from my uncle. He wanted to attempt something unusual — something that would draw the throngs of visitors crossing U.S. Highway 441. He remembered seeing a waterwheel tucked away in an Asheville rock quarry near the Civic Center, where my grandfather had promoted wrestling matches. 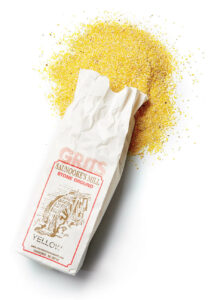 Dad was 15 when his father died, but years later, after he purchased the wheel and while the rock mason was installing it, the mason’s father called over to ask, “You know a Chief Saunooke? He tried to buy this off me years ago.” After hearing this, Dad was more determined than ever to get it up and running.

With the waterwheel poised for installation, my father built the two-story building that would become Saunooke’s Mill and Shop. But he still had no idea how to run a gristmill. Dad knew what he wanted to achieve, he just wasn’t sure how to do it. So he visited mills and spent hours with veterans like Cherokee miller Carl Lambert. Dad admits, “I’ve always been fascinated with water. It’s so tranquil.” And that was enough for him to devote his life to converting the power of the Oconaluftee into our family business.

The Saunooke’s Mill and Shop that I know, years after trial-and-error development, is lined with barrels of hard candies. Shelves exhibit incredible Cherokee art, and a dusty mill churns out some of the finest stone-ground grits and cornmeal that I have ever tasted.

In 2019, Dad leased the business (though not the building) to another enrolled member of our tribe, John Parker, who continues to update offerings while preserving the nostalgic appeal of one of the few operational gristmills in North Carolina. And while no one would ever expect a river to stay the same, I have a feeling that, like its power source, Saunooke’s Mill will continue its inevitable flow.