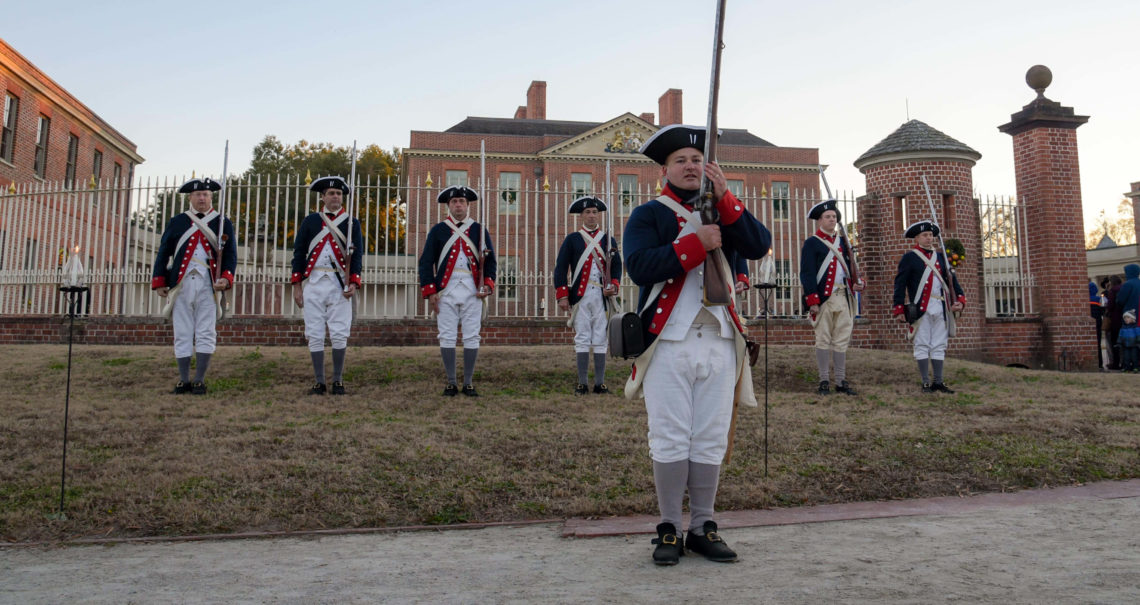 SPONSORED BY New Bern’s Tryon Palace: A Palace for All Seasons

In the heart of downtown New Bern, just blocks from the charming historic district and the Neuse River waterfront, sits one of the most important sites in North Carolina history.

Described as a “monument of opulence and elegance extraordinary in the American Colonies,” Tryon Palace, completed in 1770, served as the first State Capitol until 1794, when the capital moved to Raleigh. The palace was repurposed until 1798, when a fire started in the cellar and burned the central building, but in the 1950s, Tryon Palace was reborn when preservationists used the palace’s original architectural drawings to recreate it, and it was rebuilt on its foundation.

“If you are someone who loves history, it’s a great site to visit,” says Lindy Cummings, the research historian at Tryon Palace. “It tells wonderful stories about the American Revolution and the Civil War; enslaved people fleeing plantations and finding liberty here — but it also goes beyond history to architecture, the decorative arts, and gardens. That’s what makes it a great place to visit.”

Now, celebrating its 250th anniversary in 2020, Tryon Palace is more spectacular than ever. A special exhibit opening next year will explore the history of the palace through the reconstruction efforts, but, until then, the stately landmark will continue to serve as a stunning centerpiece in downtown New Bern — and no matter when you visit, it shines. Here’s how to make the most of a visit in every season, starting with the holidays.

Tryon Palace for All Seasons 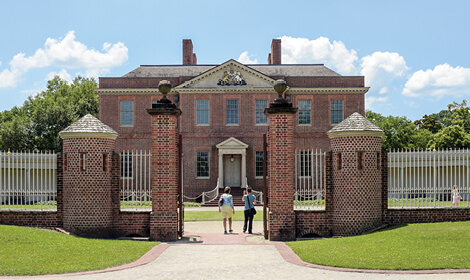 Outside, jugglers, magicians, and the popular Fife and Drum Corps perform, transporting you back in time. The palace also celebrates Jonkonnu, an African American holiday tradition traced back to enslaved people who lived in North Carolina, with music and dancing. And stick around: The evenings end with spectacular displays of black powder fireworks. 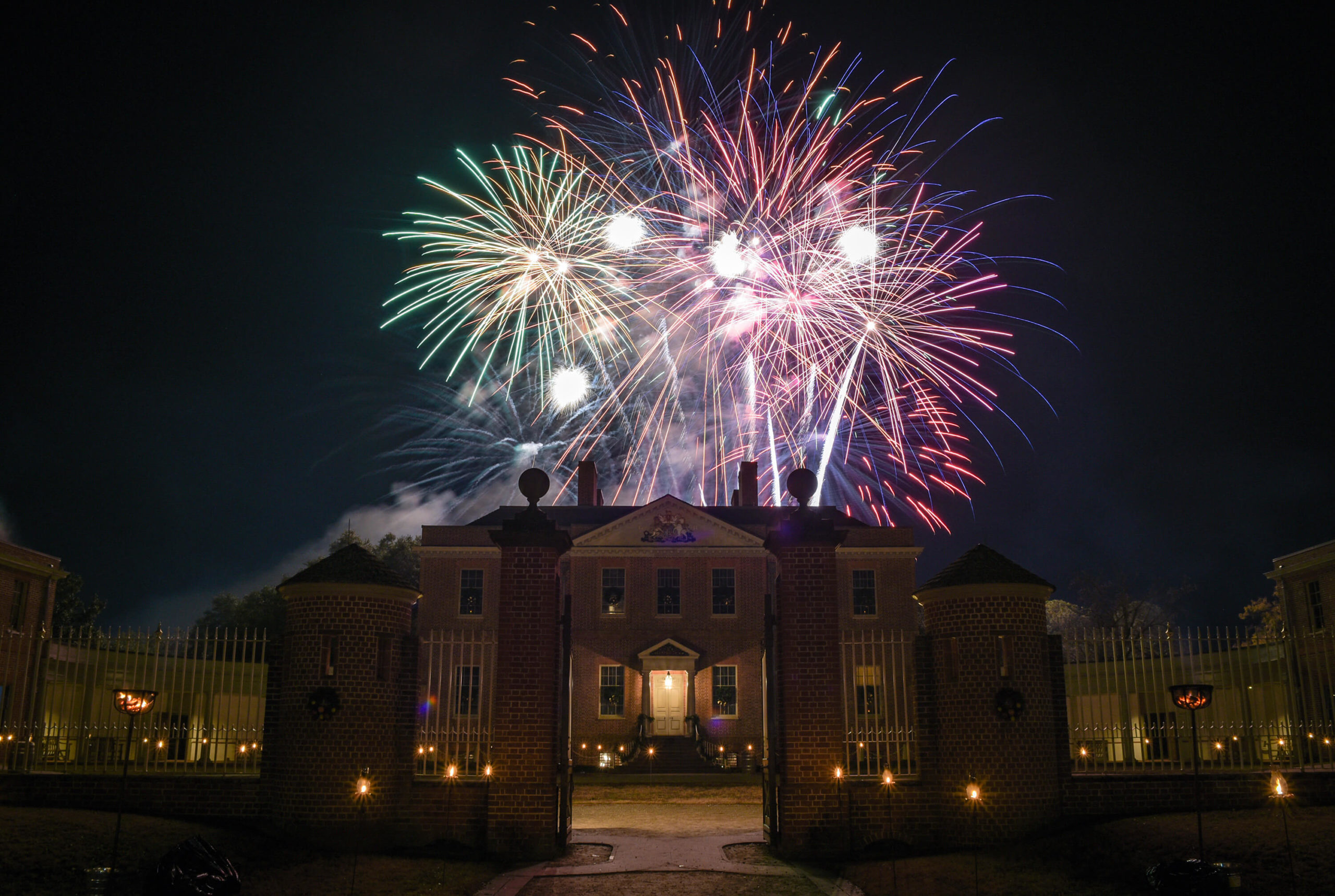 Take in the sights
Outside the palace gates, downtown New Bern transforms into a winter wonderland during the annual Beary Merry Christmas event. Enjoy live window displays, trolley tours, and a parade, and visit charming local shops to complete your holiday shopping list

Take a page out of history
Author Diana Gabaldon brought Tryon Palace to life in her wildly popular book series Outlander. After hearing from countless visitors who traveled to New Bern to explore the setting of the books (and popular TV series), historic interpreter Susan Griffin suggested creating Outlander tours.

“After reading the books, [the Outlander tours] provide a reinforcement of the actual history,” Griffin explains.

In the original “Outlander in the Governor’s Palace” tour, interpreters trace nurse Claire Fraser’s footsteps through the palace, while servants share facts about her role in the household. A separate tour, “Outlander Home and Hearth,” includes a meeting with the Governor’s cook in the kitchen office. But don’t fret if you can’t visit this winter — Outlander tours are offered at Tryon year-round.

Explore the gardens
Come springtime, Tryon bursts into color. Stroll through the Latham Garden, where a pattern of clipped hedges and flowers form the paths into a traditional “parterre” garden; and take in the old-fashioned and colorful plants in the Victorian-style Commission House Garden. The 14 acres of distinctive gardens spread across the palace grounds are among Tryon’s main attractions.

“We are intensely proud of our gardens,” Cheris says. “It’s astounding to see from one week to the next which blooms come in and which ones go out — it’s always changing.”

Whether you’re a home gardener with a green thumb or you just love beautiful gardens, grab a spot in a “Behind the Scenes” tour. Palace gardeners, who lead the tours on Tuesdays from February to June and September to November, share information about the gardens, planting tips, and a glimpse inside the greenhouse where new plants are propagated. 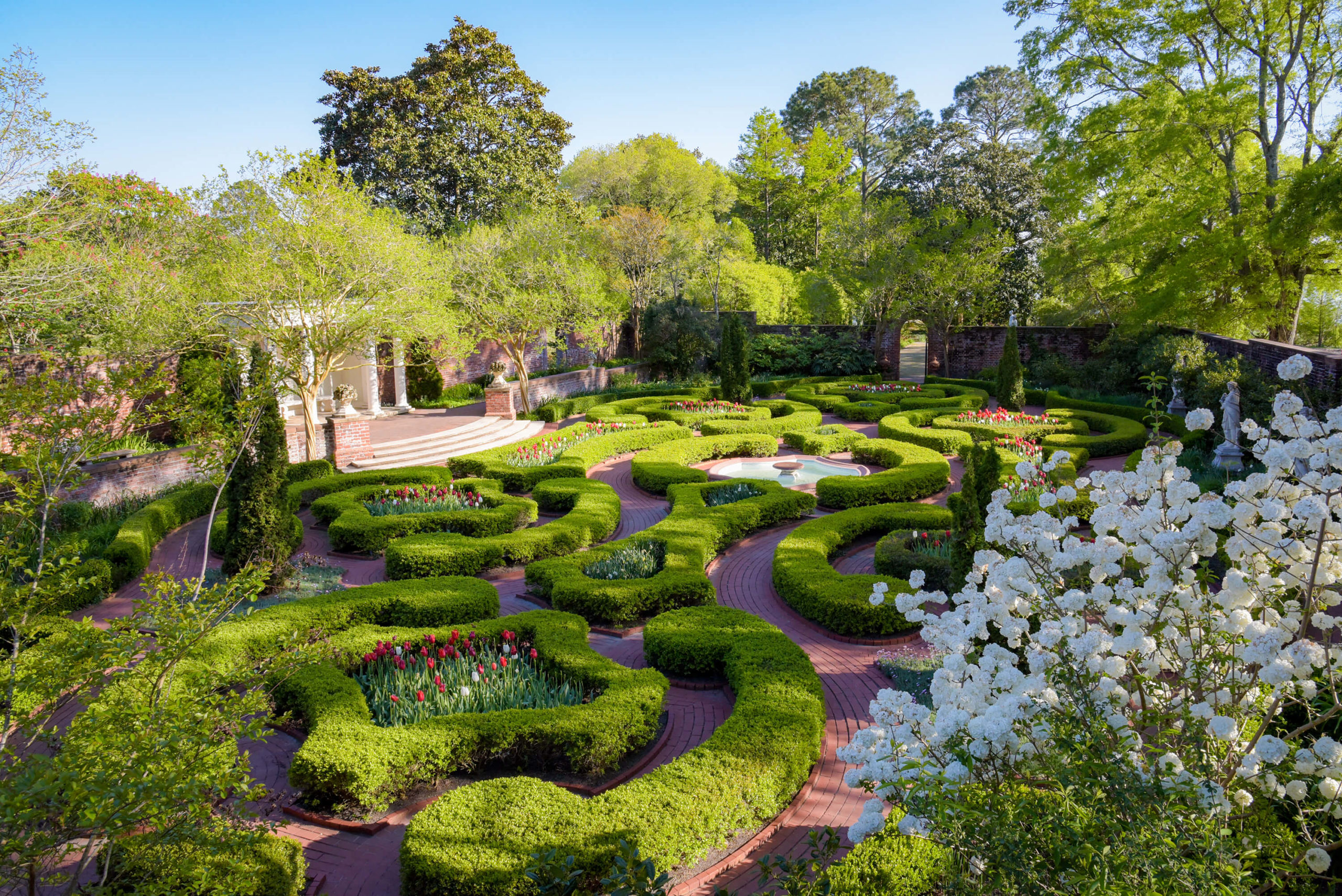 Support the arts
After exploring the gardens at Tryon, make sure to take a stroll through beautiful and historic downtown: Throughout the year, the Craven Arts Council hosts popular ArtWalk events every second Friday evening of the month. Shops and galleries extend their hours to showcase the work of local artists and highlight the makers who call New Bern — and North Carolina — home.

Dine al fresco
When things warm up, the weather is perfect to enjoy a meal outdoors — and we know a few perfect spots. Your best bet is Persimmons; the view from the deck of this riverfront restaurant cannot be beat. Stop in for Sunday brunch or enjoy dinner and live entertainment. Or check out Morgan’s Grill and Tavern, Captain Ratty’s Seafood, or The Grill at Prohibition for more great outdoor options.

Celebrate the Fourth
North Carolina Gov. Alexander Martin was the first American governor to issue a state order for celebrating Independence Day. The order, written in 1783, led to some of the earliest celebrations of the Fourth of July.

Tryon Palace continues the tradition, hosting a Fife and Drum Corps parade and firing demonstration with the 1st North Carolina Regiment of the Continental Line, and reading the Declaration of Independence. And look up: When night falls, the skies over downtown New Bern light up with incredible fireworks.

Step back in time
Every September, Tryon Palace hosts Revolutionary War Weekend. The event brings history to life, highlighting the culture during wartime in New Bern and showcasing the lives of soldiers at encampments through stories about the Revolution, musket drills, and black powder rifle firings.

It’s just one of the living history demonstrations taking place at the palace all year long. Interpreters dressed in period costumes also operate the kitchen office and make appearances at special events, including Outlander tours, to help highlight the unique period in North Carolina history — and make you feel like you’re really living it. 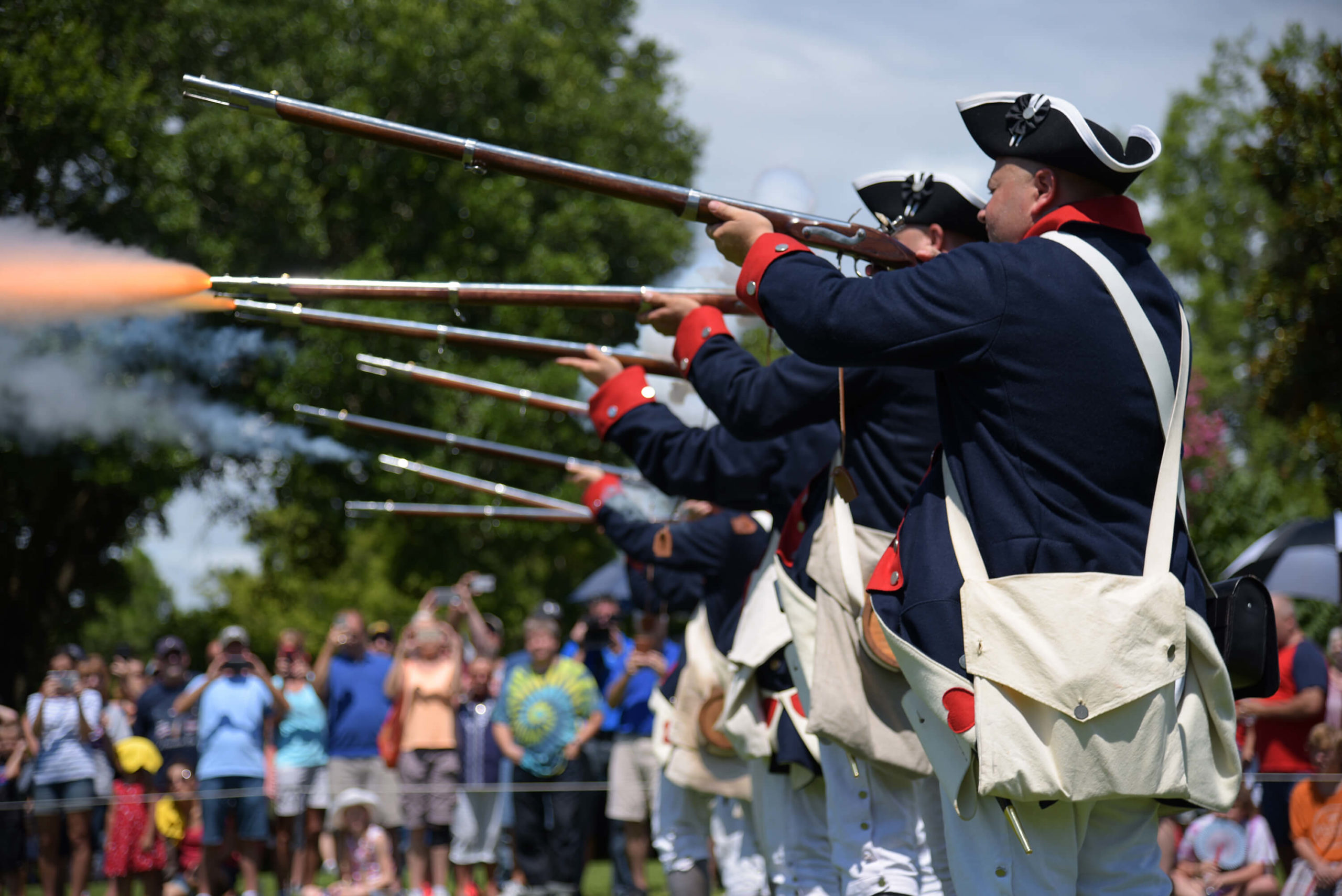 Take a walking tour
Ready to stretch your legs? Downtown New Bern is home to extraordinary history and hospitality, and there’s no better to time to explore than a warm summer afternoon. Visit New Bern created itineraries for several self-guided walking tours: On the Revolutionary War Tour, which starts at Tryon Palace, explore structures like Major John Daves House, Union Point Park, and the Lady Blessington Cannon to learn more about the role New Bern played in the Revolutionary War.

Other self-guided tours include a walking tour to visit Civil War sites, historic churches and cemeteries, notable architecture, and sites from the movie A Walk to Remember. The Bear Town Bears leads you through downtown in search of hand-painted fiberglass bears created in honor of New Bern’s 300th anniversary celebration.

Experience fall colors
In New Bern, bright and beautiful flowers don’t stop blooming when the weather cools off. A visit during an October weekend means experiencing MumFest, a beloved, rollicking waterfront festival that’s been held each autumn for more than 40 years. Enjoy live music, shop from dozens of vendors, and eat delicious festival food — all on downtown streets lined by thousands of mums. You’ll feel like you’re in a fall fairy tale. Snap selfies beneath the mum arch or navigate the mum maze at Union Point Park. And, of course, head to Tryon Palace, where mums are bursting throughout the beautifully sculpted gardens. 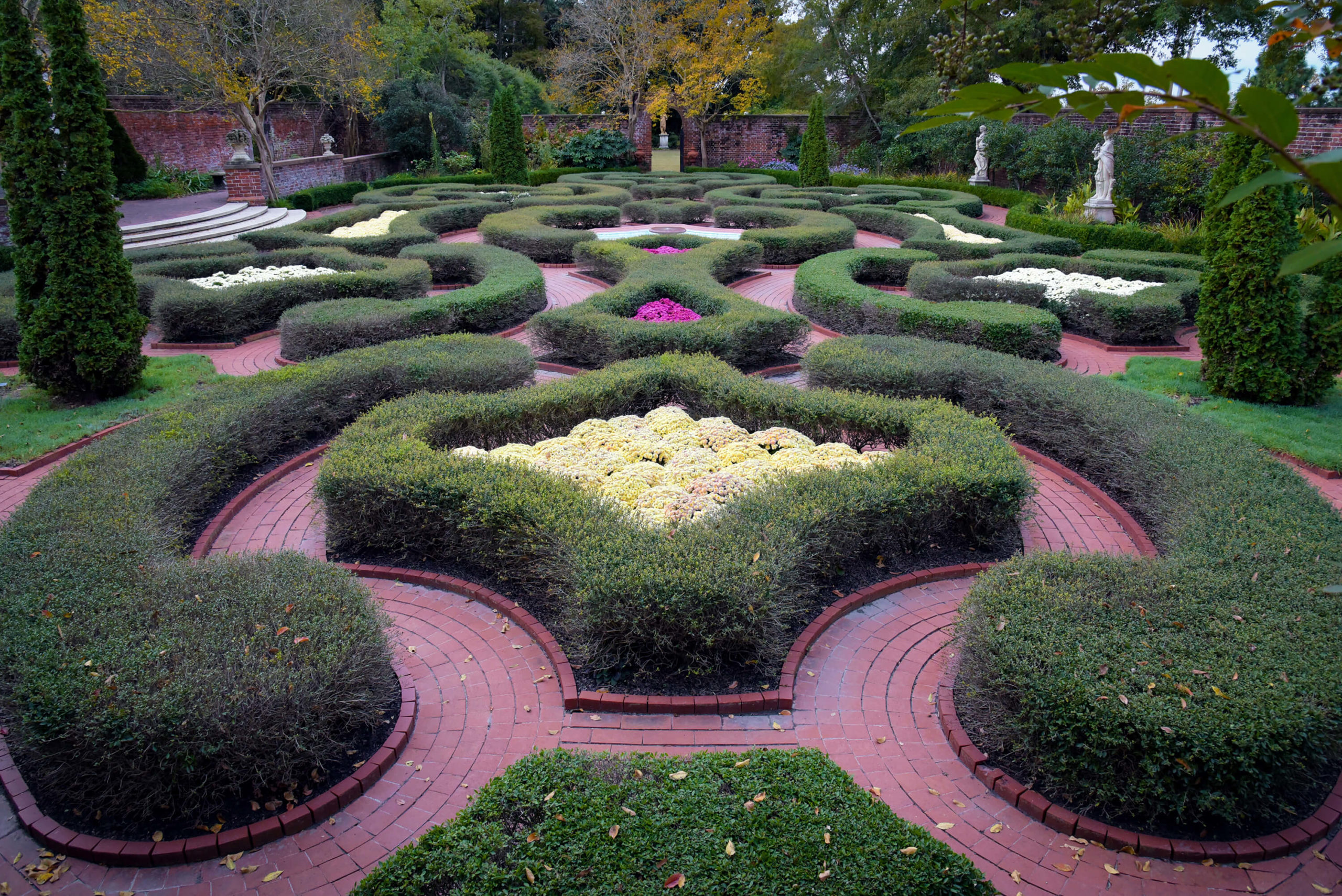 Enjoy a spook-tacular event
While little ghosts and goblins in their Halloween costumes search the palace grounds for candies, the Headless Horseman searches for Ichabod Crane, witches brew concoctions, and the ghost of a soldier roams among them. It’s all part of the All Hallows event at Tryon Palace.

Every October, the New Bern Historical Society also hosts Ghostwalk. The costumed guides wander through cemeteries and other haunted locations, promising to disclose where all of the local skeletons are buried.

After you’re sufficiently spooked, warm up during dinner at either The Chelsea or Cypress Hall, two upscale downtown bistros; and cap of your night by cozying up at a downtown bed and breakfast.

No matter what time of year you visit, Tryon Palace in Historic New Bern provides a setting for a thrilling adventure.