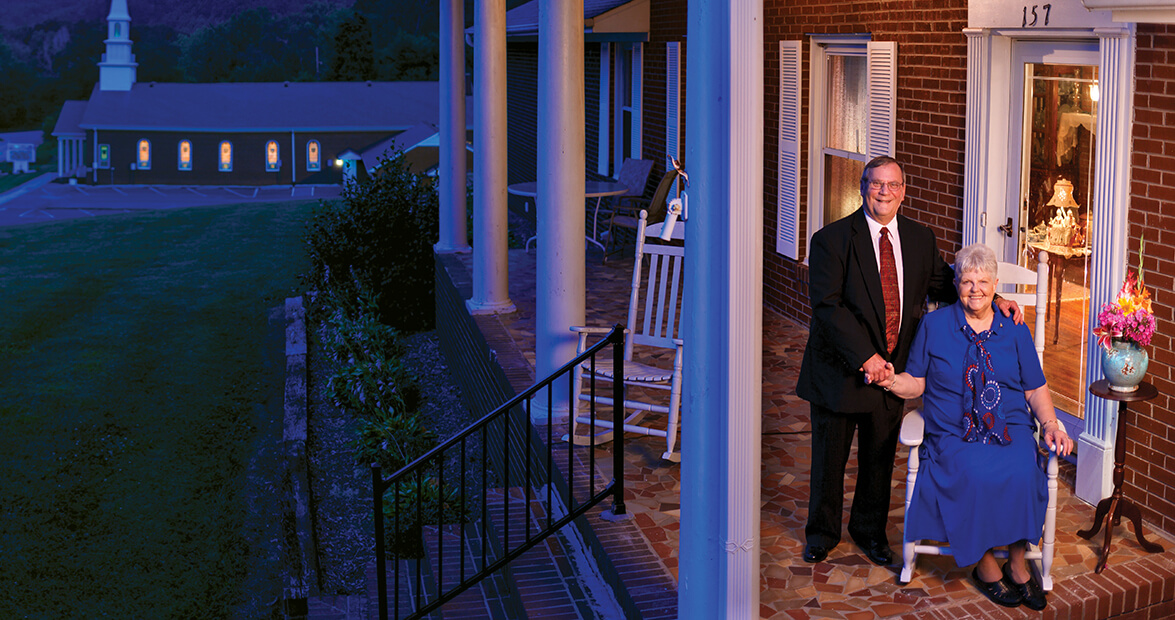 EDITOR’S NOTE: This story was originally published in September 2016.

Welcome to Spencer Mountain. Population: two. Welcome to a ghost town where, thanks to a haunted mansion, the ghost population may be larger than the actual population.

The ghost population may be larger than the actual population.

The only living residents, Chase and Alice White, moved to town from Statesville in 2013. Chase was called to become pastor at Spencer Mountain Baptist Church, which, along with one empty home, an empty convenience store, and their parsonage, is one of the few buildings left standing here. From their front porch rocking chairs, Chase and Alice can see the property where the Pharr Yarns textile mill once sat before it closed in 1999. After it was demolished, most of the mill homes surrounding it were gradually burned down as part of local firefighter training exercises. The town’s population shrank, from 137 in 1990 to 62 a decade ago.

The Whites do have neighbors. “Our driveway circles behind our house, and there are houses on the other side of the driveway, so we just assumed they were part of Spencer Mountain,” Alice says. They weren’t, and it turns out, the city limit runs right through the Whites’ property. “Shortly after we moved here, we learned we were the only two residents.”

At first, the couple’s residency became something of a running gag with the 50 or so church members, all of whom live out of town. They jokingly suggested that their man of the cloth should become a man of the people and run for mayor. Then, as the couple began hearing whispers that the town could be absorbed into a neighboring municipality, Chase decided that the joke wasn’t a joke. By electing himself mayor, “we could at least save the town for two years, because I’d be the mayor and [another city] couldn’t annex us,” he says. “We looked at each other and said, ‘Are we going to do this?’ We decided yeah, so we went and voted.” 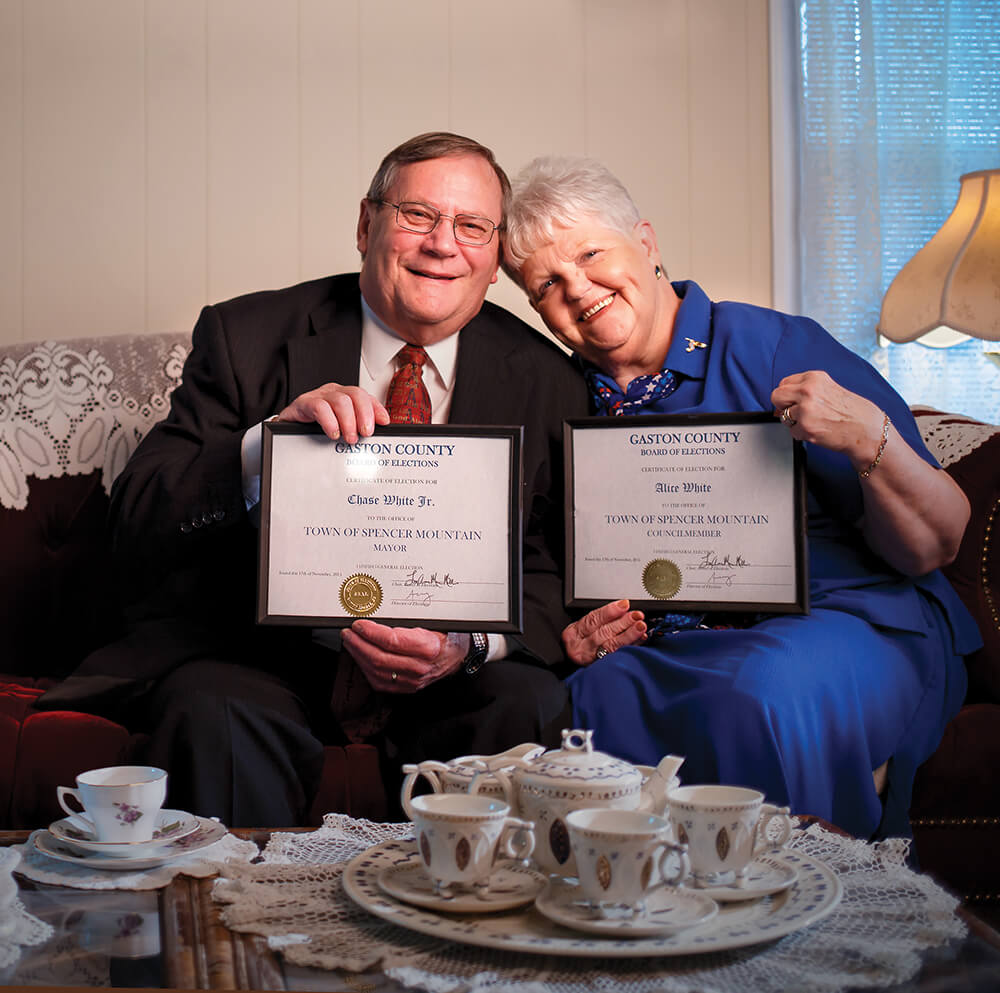 Chase and Alice White are the only elected officials in their town. They’re also their only constituents. photograph by Jerry Wolford & Scott Muthersbaugh

Their votes were big news at election headquarters. The town — which hadn’t had any elected officials since 2011 — suddenly had two new public servants: Mayor Chase White (with two write-in votes) and Councilwoman Alice White (one write-in vote).

“I wrote her in as a city council member, and she didn’t know it till afterward,” Chase says with a chuckle.
Alice half-smiles as she rolls her eyes. “I didn’t want that,” she says, “because now I have to find out what a council person does.”

They were sworn in last December — in their living room, with their cat, Tom, looking on.

“Most of the time when we swear someone in, we do it at the town chambers,” says Adam Ragan, director of elections for Gaston County. “Spencer Mountain doesn’t have a town hall — the best they had was their home, so we did it there.”

What happens next for Spencer Mountain isn’t clear. Chase wants to do some cleaning up around town, to make the small municipality more appealing to people passing through. He’s also been talking to representatives of Pharr Yarns — which still owns the land in Spencer Mountain — but they’ve repeatedly said they have no plans to develop it.

Over the summer, the North Carolina General Assembly passed a law that temporarily suspended the town’s charter. “This would kind of put them in neutral until the town is repopulated,” Representative John Torbett, who introduced the bill, told the Gaston Gazette in May. That’s fine with the Whites, who would still maintain their elected positions at least until November 2017, but would not be required to foot the bill for costly state audits.

The Whites have been the biggest news in Spencer Mountain since — well, probably since the mill’s closing some 17 years ago. Prior to that, the town’s claim to fame was the transmitter on Spencer Mountain, from which WBTV in Charlotte broadcast the first commercial television signal in the Carolinas. The station no longer uses the tower, but it’s still used by other groups, including amateur radio operators.

Spencer Mountain’s other claim to fame, believe it or not, is that boarded-up haunted mansion, which attracts ghost-hunters from far and wide — despite numerous no-trespassing signs on the property. The story, according to the Whites, is that the mansion was never lived in, though it was used as a community center at one time.

Indeed, who knows in a ghost town like Spencer Mountain, where even a pastor with no political experience can become mayor?