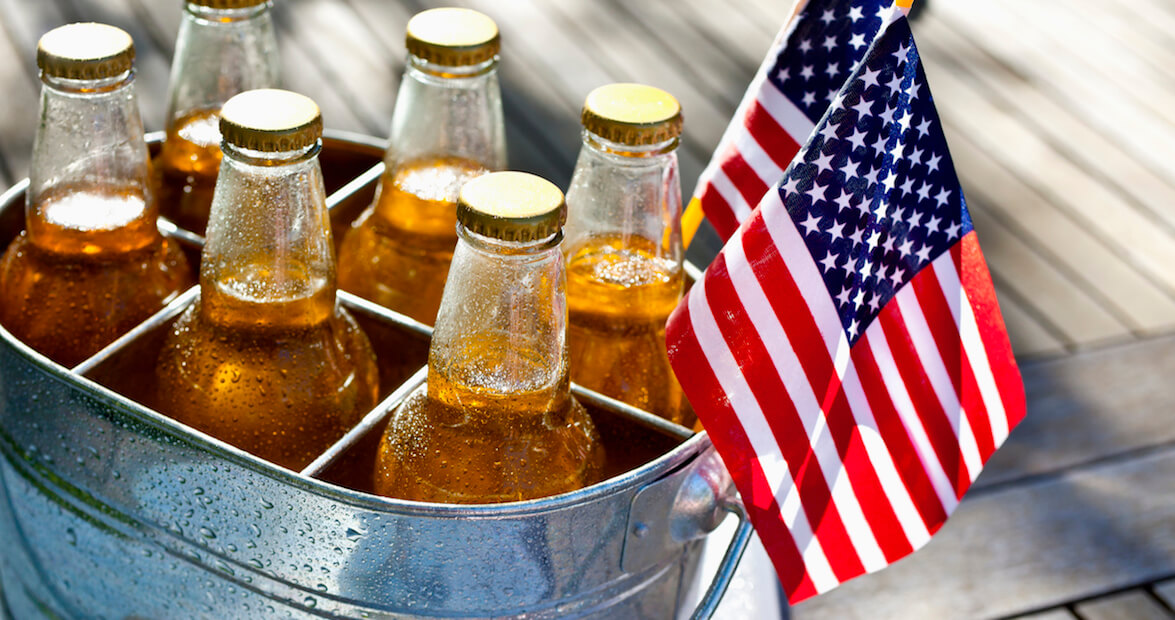 The Fourth of July means fireworks, barbecues, parades, and an opportunity to celebrate our country’s freedom. It’s also a time to remember the sacrifices of those who have served to protect it. This July, we’re recognizing the bravery and selflessness of our current and former military members by raising a pint at these veteran-owned breweries.

Check Six Brewing Company
It’s all in the name, co-owner Noah Goldman says. “‘Check 6’ is a term mostly used by Air Force pilots. Behind you, your 6 o’clock, is your weak spot. The idea is that somebody has to have your 6 for you.” So, when Goldman partnered with Lt. Col. Tim Hassel to open the brewery in 2015, they agreed it was the perfect name to let people know that “when it comes to beer, we’ve got your 6!”

Each of Check Six’s more than 10 beers are named after World War I-related figures and memorabilia. One of the brewery’s more popular offerings,the Harley Pope Imperial Porter, is named after 1st Lt. Harley Pope, a prominent airman and one of the first commanding officers at Fort Bragg. “You can name a beer anything, but there should be a story behind it,” Goldman says. “Fortunately, there are a lot of neat stories, neat-looking planes, and interesting events that took place in North Carolina during the First World War.” In addition to their regular offerings, Goldman and his staff also operate an in-house “flight school” for experimental brewing. “If you want to learn how to fly a plane in the Air Force, you go to flight school,” Goldman says. At the brewery, brewmasters can test new creative beers from the flight school program by sending them out on a “tour of duty.” If the concoctions are popular, then the staff will talk about extensions.

Inside the aviation-inspired taproom, the World War I theme continues. Pictures of historic planes adorn the walls. A wooden plane propeller hangs over the bar. Even the bar top itself is shaped like a Taube, a World War I German aircraft. But look past the decor and you’ll find that it’s the people that make Check Six Brewing Company feel familiar to first-time visitors and regulars alike. From the owners to the bartenders, military experience abounds among the brewery’s staff — and veterans take note. “When they come in, they like the ambience of the military theme and the veteran-owned and -operated aspects,” Goldman says. After all, it’s the knowledge that the staff at Check Six Brewing Company has their backs that keeps customers coming back.

Railhouse Brewery
What do you get when members of three branches of the military come together to open a brewery near Fort Bragg? “Free beer,” co-owner Scott Birdsell jokes. And that’s really not too far from the truth. Veterans might literally find a beer with their name on it when they arrive at Railhouse Brewery in Aberdeen, thanks to the “Beer Forward Wall.” Customers purchase beers in advance, then leave a sticky note for former military members to cash in. “The wall is filled with names or titles, like ‘Vietnam vet,’” brewmaster Dan Fitfield says. “So someone who’s a Vietnam vet can come in, take that sticky note, and get a beer courtesy of whoever paid for that note.”

Railhouse Brewery opened its doors in December 2009, near Fort Bragg. “We wanted to make beer for the community, but also to do things to give back to the military. That was in our business plan from day one,” Birdsell says. To do so, Railhouse hired a staff that’s nearly 100 percent military-affiliated, hosts events for and donates to military nonprofits, and keeps a wall of remembrance inside the taproom, where customers can submit names and plaques to commemorate fallen servicemen and women.

And then there’s the beer: Railhouse’s lineup includes five flagships, four seasonals, and one small-batch brew released twice a month. The summer seasonal, Knight’s Golden Ale, is named after the U.S. Army parachute team, and the Pineland Pale Ale is named after a local military exercise. The taps of the KA-BAR Brown Ale will catch anyone’s eye. “Every Marine carried a KA-BAR knife, so we partnered with the company to create a beer. The tap handles are the knives without the blade,” Birdsell says. For the veterans who visit, though, it’s the experience of popping off the American flag-printed bottle cap on their military-themed brew while surrounded by Armed Forces memorabilia that makes drinking at Railhouse different from most other breweries. And for the staff, that resonates, too. “This is a military town, and I’m a military guy,” assistant brewer Dave Robinson says. “So it just fits. This is my place in the world.”

Check out other veteran-owned and -operated breweries across the state: