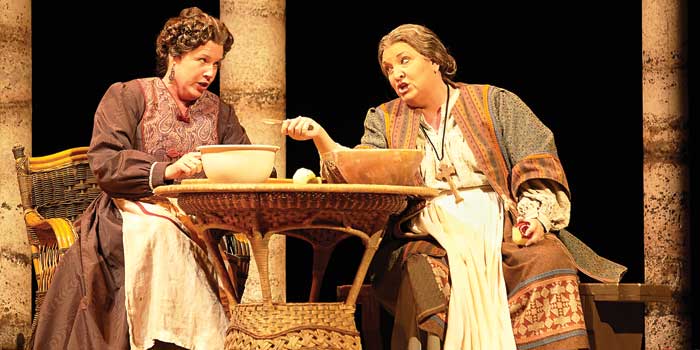 As the towering buildings in New York City loomed over Victoria Livengood in 1985, the 25-year-old from Thomasville meandered through the engineered steel with a sense of purpose and her father’s credit card in her back pocket. She wore jeans and a ponytail and spoke with her thick, slow North Carolina accent. And when she opened the doors of a jewelry store on Fifth Avenue and spotted a blue topaz necklace, she knew it had to be hers.

Livengood told the jewelry store clerk she needed that necklace to sing at the Metropolitan Opera that Sunday, but he didn’t believe her.

“If you’re an opera singer, I’ll eat my hat,” he told her. “Not only that, but if you can sing my favorite opera aria, I’ll give you that topaz necklace.”

Livengood hopped on the counter and began to sing “Habanera” from Carmen. The notes rose and fell, and when she finished, the man’s mouth hung open.

“He apologized and came to hear me sing,” Livengood says.

That Sunday, Livengood won the national auditions at the Met and began her career as an international opera star. She played Carmen in Europe, Canada, the United States, and South America, and performed in nearly every state and four continents. She sang with Luciano Pavarotti and was nominated for a Grammy. Today, at 53, her voice is strong and smooth. The Washington Post wrote last year that Livengood’s “voice is a lovely one, rich and deep,” and in 2010, a Post reviewer boasted that “her voice could peel paint off the walls.”

‘Gonna be a singer’

Livengood didn’t always want to be an opera star. She grew up in Thomasville on a farm singing with her family. The Livengood Family Quartet traveled the state, singing in churches and at revivals. They built a solid fan base. When it was time to attend college, Livengood decided on the University of North Carolina at Chapel Hill — she “just had to be a Tar Heel” — and enrolled in the pre-law program. But when she took choir to fill a one-credit requirement and sang “The Hills are Alive,” the choir director told her she had more voice than she knew. He took her across the street and had her sing for the voice faculty. They told her she was an operatic mezzo soprano, and Livengood switched her major, called her father, and said, “Daddy, I’m not gonna be a lawyer; I’m gonna be a singer.”

Over the next few years, Livengood continued taking voice lessons and learning operas. She graduated from UNC, and then moved to Boston for graduate school. It was then that she participated in the National Council Auditions at the Met, wore the topaz necklace, and won the competition. She signed with an agent and started booking shows across the world.

Hear more about Victoria Livengood’s adventures in an excerpt from her interview. Visit www.ourstate.com/dixie-diva-interview to listen.

“Literally, this was designed by God for me,” Livengood says. “I don’t believe that little girl comes off the farm in Thomasville never having heard an opera and becomes an international opera star — I don’t believe that happens by luck. Now I didn’t have a burning bush, but I had doors open and show me where I needed to go next.”

A few years ago, Livengood knew the next place she needed to go — back home to North Carolina.

In Mint Hill, right off Misty Moss Court, Livengood lives in a small, two-story house with beige siding. Inside the doors is a baby grand piano. As Livengood gives a tour of her home, she points out memorabilia along the way. Her New York City Opera debut bowl. A key to the city of Thomasville. Her photo with Pavarotti. And upstairs, inside the Diva Den, is a collection of dolls — including Barbie dressed as Carmen — and her Met debut poster from 1991. “So special to me,” Livengood says, shaking her head.

In 2009, Livengood decided to move to this home with her husband. She takes on fewer roles these days, but she still sings all over the country and with Opera Carolina in Charlotte. She teaches vocal lessons to 20 students who fly in from New York, Canada, and Florida. “They call it Miss Vickie’s boot camp,” she says.

And for one week, she helps them practice the arias and techniques she learned years ago.

The largest opera company in the Carolinas is based in Charlotte. And conductor James Meena is one of the few in the world to conduct his operas entirely from memory. “You won’t get any better in New York,” Livengood says. See The Pearl Fishers from April 11-21. For tickets, call (704) 372-1000 or visit operacarolina.org.