Decades of decay and mischief turned this abandoned mill house into a stop for ghost hunters. Paint has given way to rotting wood. Four-by-fours prop up the porch awning; shards of glass lie beneath empty window frames. 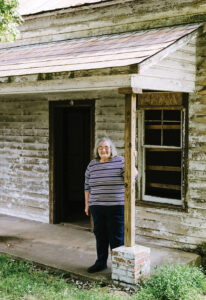 Anita Brittain, on the porch of her former home. photograph by Revival Creatives

But if you sit with Anita Brittain by her childhood home at Henry River Mill Village, you don’t see the decay. You envision what it once was: a bright white home with vibrant trim — sometimes green, sometimes blue or brown — where she lived from her birth in 1944 until her wedding in 1970.

With a little imagination, you can see her mom’s pink peonies and red roses out front. You see the backyard garden bursting with her dad’s tomatoes. You see kids piled on the porch, helping each other with homework. You peek through the front window into her mom’s visiting room, meant for conversation but never, ever for a television.

This is the home that Henry River Mill Village wants you to see. The plan is to restore this village, cottage by cottage, and make sure that its people and stories are not forgotten.

“It’s the blue-collar Biltmore,” says Calvin Reyes, a co-owner of Henry River Mill Village. He discovered this 72-acre village in 2017, when he came to scout property for him and his wife, Melissa, as well as his parents, Elaine and Michael Namour. Before he found their new homes, however, he found their new life’s work. All four took on the restoration together.

The mill village, about seven miles from Hickory, is frozen in time. Eerily so. Starting in 1905, a cotton mill was the center of life here, producing a yarn delicate enough to become curtain lace and durable enough to become World War II parachutes. Surrounding it were 35 cottages and a general store. The mill shuttered in 1970 and burned to the ground after a 1977 lightning strike. The residents left — most of them, anyway — and the buildings slowly succumbed to weather and vandalism. 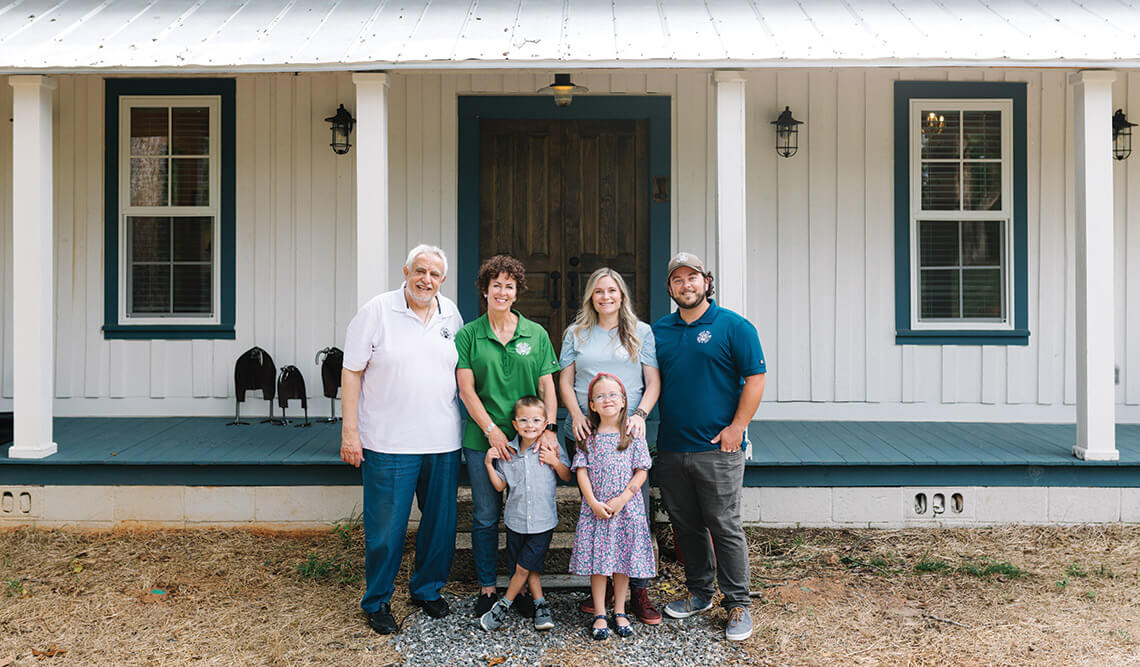 From left, Michael and Elaine Namour and Melissa and Calvin Reyes — with two of their three children, Collins and Teddy — are refurbishing the Henry River Mill Village cottages. photograph by Revival Creatives

Graffiti inside Cottage No. 13 reads, “We see what we want to see.” It’s an apt expression here. Each week, more than 100 tourists explore Henry River Mill Village, mostly hoping to see the filming location of District 12 in The Hunger Games. While Calvin emphasizes the village’s past, he doesn’t shy from its cinematic connection. The “Katniss Everdeen cottage” is more movie set than mill history.

Some visitors come to see ghosts. This is a popular destination for paranormal investigators, and though Calvin doesn’t believe in ghosts himself, he still finds it odd how similar their discoveries tend to be: two girls who haunt the general store, a sudden chill in the living room of Cottage No. 12. 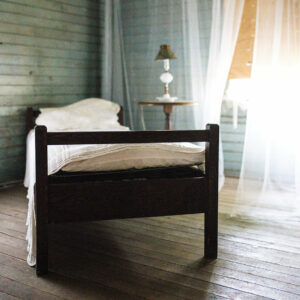 Fans of The Hunger Games may recognize the bedroom in Cottage No. 6, which appeared in the movie as the home of the main character Katniss Everdeen and her family. photograph by Revival Creatives

The ghosts make a certain sense. Many people who lived here insist on coming back. Even though the cottages never had bathrooms or running water, even though their insulation was no more than wallpaper or cardboard, the community spirit here outlived the mill. Anita’s dad, Daniel “Bud” Pinkney Rudisill, lived in this village nearly all his life. He was born here in 1913, and he stayed into the early 2000s, in a home without running water and in a village with mostly empty houses. Even after he moved in with Anita at nearly 90 years old, Bud spent every healthy day he had left coming back, sitting in a chair on his old front porch to read his paper and wave to passersby. His daily exercise was a walk to the site of the mill — his old commute.

Now, 11 years after her father’s death, Anita returns often, too. She brings homemade cakes for the Reyeses, then settles into a chair in the parking lot as the families exchange stories and news.

“This is home,” she says, looking at her old cottage, five decades after she left it.

“This is what most history is,” says site director Taylor Edwards. “Not everyone was George Washington.”

This project is devoted to sharing the history of mill workers, some of whom were looked down upon in their day as poor and uneducated “mill hill kids.” It honors their work and their commitment to each other. While many restorations revive grand mansions, this is a humbler kind.

“My family and I feel it’s important to preserve history — all history,” Calvin says. “The stories of mill villages are 95 percent the same: where they went swimming, where they got baptized, the gardens they had out back. Henry River should be a representation of all of that. It may not be where you grew up, but it should still feel like home.”

The Reyeses’ and Namours’ first restoration was Cottage No. 12, which was once occupied by Mandy Lynn, born in 1897. Through interviews with Mandy’s great-granddaughters, they learned that she was a winder in the mill and, for most of her time in the village, lived alone as a widow. She saved buttons, which kids played with when they visited — and kids loved to visit Mandy. She was an adept seamstress, and in the winter, she’d weigh down her granddaughters with quilts to keep them warm.

Cottage No. 12, restored into a vacation rental, is filled with Mandy-esque touches: quilts on sofas, jars filled with buttons, a coatrack made from her old spindle. Calvin found a remnant of Mandy’s wallpaper, touched up the pattern in Photoshop, and had it printed anew. Framed on the wall are Mandy’s picture, her life story, and even a paystub from 1960, when she made a dollar an hour. 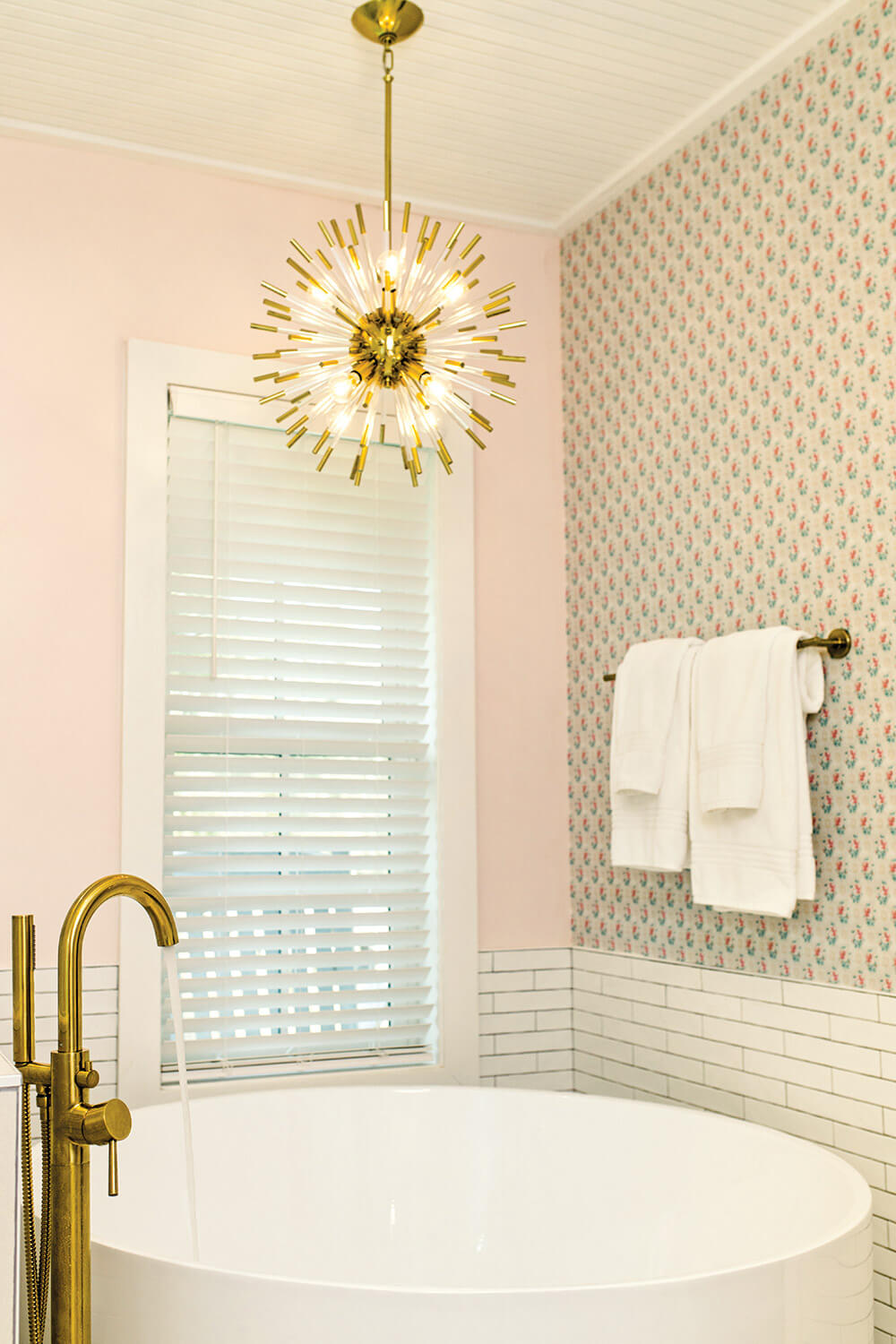 Cottage No. 12 has been meticulously renovated — down to the wallpaper that was digitally re-created using a scrap from the original. photograph by Revival Creatives

The cottage is more of a tribute to an ordinary mill worker than a replication of her home. Surely, Mandy would’ve enjoyed the insulation, bathrooms, and televisions it now has. It’s easy for a guest to forgive anachronisms while soaking in a 55-inch circular bathtub beneath a chandelier.

At night, after tours end and staff leaves, the lights in Cottage No. 12 are the only ones in the village. The view from the front porch reveals silhouettes of boarded-up cottages. Ghost stories that seemed fun during the day become a little less so. It doesn’t feel unreasonable that Mandy might be here, too. And is that a chill in the living room?

Two months before I stood in front of Anita’s home, I stood before another abandoned house. This one, in Wheatland, Pennsylvania, also belonged to a mill family — a steel mill family. Mine. Before me, weeds stood a foot high; uneven steps led to a decaying front porch. My great-grandmother moved in as a newlywed, modest but always pristine (both Gram and her house). This was where my grandmother and her three siblings grew up, where I celebrated Thanksgivings and July Fourths as a kid.

Hours earlier, I had kissed my father’s casket in a difficult goodbye. But here, I could see him sticking his head out of the door to call me inside to be his partner in a game of euchre (we made a powerful team). I could see the metal porch glider, which was meant for two but could fit six of us cousins. I could see Dad going back for seconds of Gram’s pie — he said it made her happy, but we knew better.

Old houses can do that. Those of us who loved them will always see them as they once were, will always feel the presence of the people who once were, too. 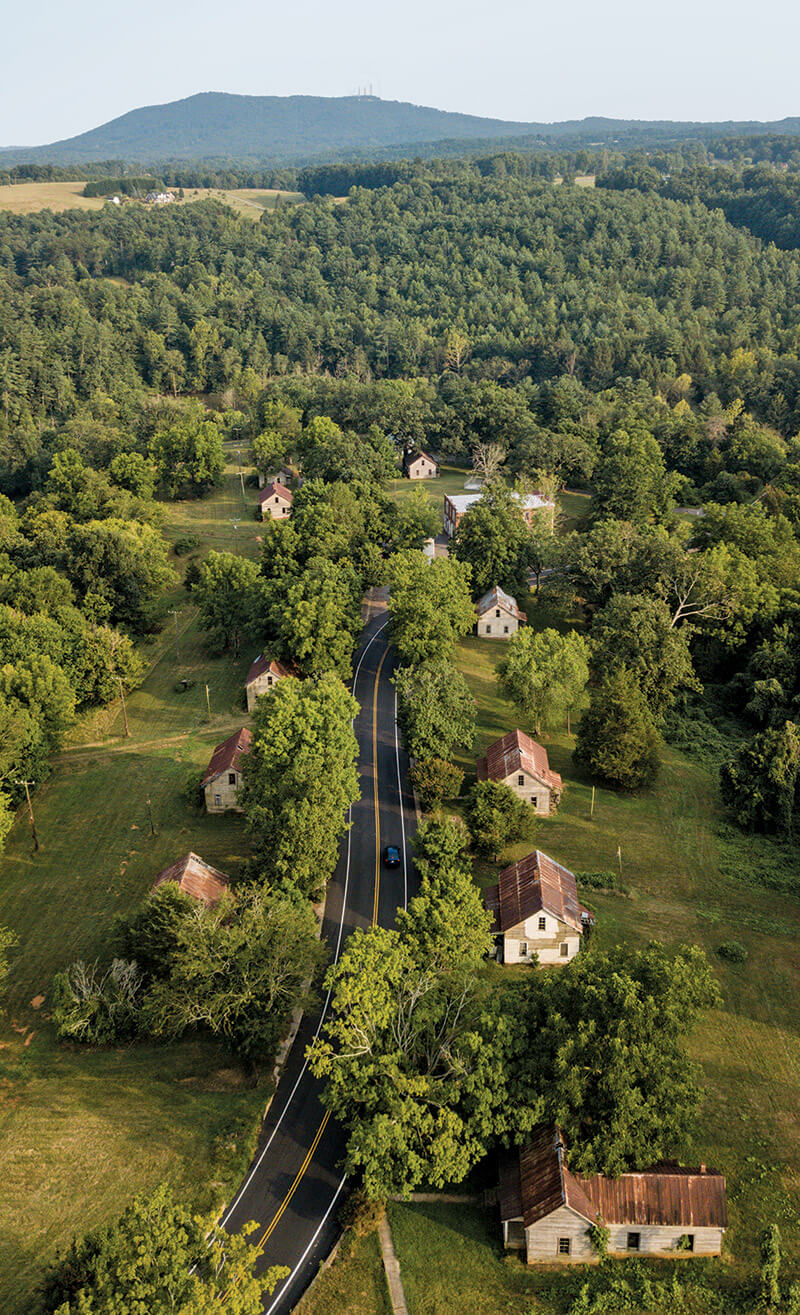 That’s why Henry River Mill Village resonates. So many of us know such a house. A house — humble and small and the absolute center of life itself — near a mill that kept the family fed and clothed. This village restoration is an opportunity to say that, for a while, these people were here. And they weren’t fancy and they weren’t rich, but they worked hard and loved hard and belong in history on equal footing with the Vanderbilts and the Rockefellers.

Here, people see what they want to see. But even if they come seeking stories of Katniss or ghosts, they end up finding the real stories of Henry River Mill Village: Bud and his tomatoes, Anita and her homework buddies, Mandy and her buttons.