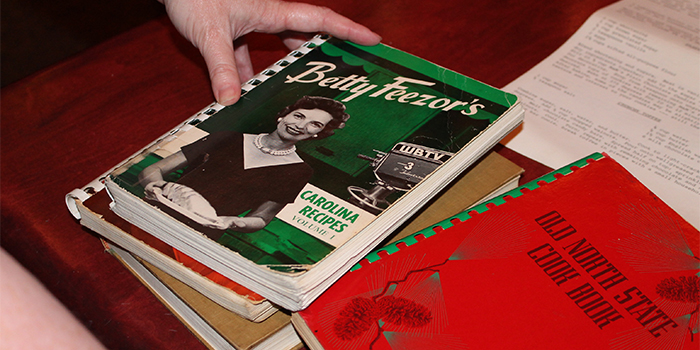 Angela Snider’s hobby fills two antique pie safes at the home she shares near Huntersville with her husband, Scott, and spills over into a storage unit she rents off-site. Snider, originally from Florence, South Carolina, is a vintage cookbook collector, especially those with ties to the Carolinas.

Snider’s main interests in cookbooks are ones written by the late Betty Feezor, who hosted a popular television show for women viewers on WBTV in Charlotte in the 1950s, ‘60s, and ‘70s. Feezor cooked, sewed, and was skilled in other creative projects.

“When you talk about collecting vintage cookbooks, especially in North Carolina, you have to go to Betty Feezor,” Snider says. “She’s got to be one of your staple items. Just because of the fact that she was, in essence, the Martha Stewart before there was a Martha Stewart.”

Snider says she admires Feezor for “the impact she had on an entire region,” and because she was an “amazing influence on women in the Southeast.” 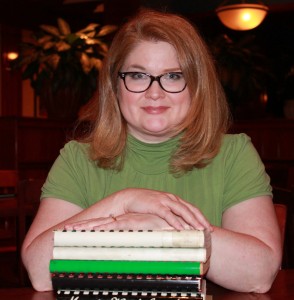 Angela Snider, who lives near Huntersville, collects vintage cookbooks with ties to the Carolinas. photograph by Hope Yancey

One of Snider’s treasures is Betty Feezor’s Carolina Recipes, Volume I, a gift from a listener when Snider worked in the syndication department at the “Bob & Sheri” radio program in Charlotte, co-hosted by Bob Lacey and Sheri Lynch. Snider currently is a marketing specialist in social media for a food company in Salisbury.

Other special cookbooks Snider enjoys locating are Moravian Church cookbooks from North Carolina. “I married a Moravian,” she says. Church cookbooks, she explains, provide a glimpse of how people gathered and celebrated with food.

Snider says she wishes she had more time to cook and bake herself, but for her, collecting vintage cookbooks is about nostalgia and the hunt itself rather than trying the recipes the books contain. She loves reading handwritten notes left in the margins by previous owners, denoting whether a dish was good or bad. Even a spatter of cake batter on a page tells a story. 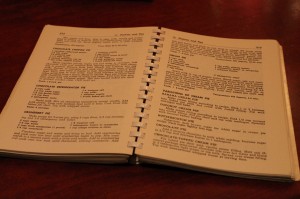 Recipes in vintage cookbooks are different from some in modern cookbooks, according to cookbook collector Angela Snider. photograph by Hope Yancey

She has noticed some differences between vintage and modern cookbooks. Recipes have evolved to become healthier, she says.

Snider estimates she now owns more than 1,000 cookbooks, including both vintage and modern titles. (Earlier this year, she purchased 700 books at one time, which caused her collection to skyrocket.) She has been collecting cookbooks for at least 10 years.

Her discoveries come from garage sales, yard sales, estate sales, used bookstores, and online, among other places. She has seen some Betty Feezor cookbooks offered for $1 at garage sales, but they sometimes are priced $15-$20 at estate sales.

The oldest and most expensive cookbook find she’s made was a book from Charleston, South Carolina, dating to 1855, for which she paid about $50 including shipping costs. The book had found its way to Great Britain. “What journey did this cookbook go on?” Snider wonders.

Snider shares her adventures in cookbook acquisition in her blog: cookbookaholic.typepad.com.