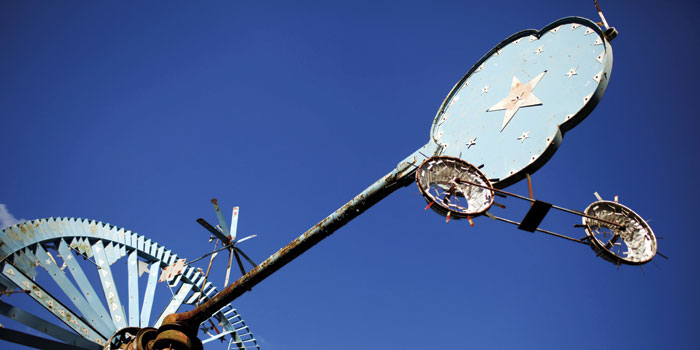 The aging artist props himself up with a walker. Today is the first day in a month that he’s been free from his bed. He just spent two weeks in the hospital for oral surgery, then squandered another two weeks at home resting and recovering. Like most restrained things that have lived their lives in constant motion, the aging artist is full of smothered energy.

“I’ve been through hell since the last time I was here,” he says entering his workshop.

He is rusting. His knees barely support his body. His voice is gravelly. His words are rough, and he sometimes says things he shouldn’t say. And his hands, those massive hands, falter a bit on the rails of the walker.

Vollis Simpson has fought off time better than most. But at 93 years old (he’ll turn 94 in January), even the most kinetic souls slow down.

For the moment, he’s in this warehouse in downtown Wilson where most of his life’s work lies in pieces. Vollis is a whirligig artist, and what that means is a little hard to explain in printed words or still photos. He takes steel scraps and nuts and bolts and fans and … things … and he puts them together to create giant, wind-powered sculptures of machinery that spin and dazzle.

But like the man, those whirligigs have rusted over time. In this warehouse, a crew of 16 people is working to restore those machines with new paint and finish so that they can be put on display. They’ll be placed in a park at the center of Wilson, a colorful little town in eastern North Carolina. They will become arguably the most peculiar defining symbols of any town anywhere.

And the legend of Vollis, the world’s leading whirligig folk artist, will spin in the wind long after he’s gone. The charming thing about that is that Vollis never set out to be remembered. He never even knew he was an artist.

“Back when I started it, it won’t no damn art around here,” Vollis says. “Nobody knew what the hell it was. Now the dang things are all over the world. It’s a different kind of art.”

Vollis is clearly not a flower of an artist. He wears a flannel shirt and a United States Veterans cap, sweatpants, and shoes with zippers on them. He isn’t big, maybe 5-foot-9 if he’s standing straight, but he’s sleek and steely. He’s never had a drink of alcohol — a fact his wife of 66 years, Jean, adamantly confirms — and instead has an incurable addiction to milk shakes.

His hands are things of Wilson County lore. By either battering or blessing, they are enormous, each finger maybe an inch longer than the average man’s. He dominates every handshake, and he owns every room.

He’s a different kind of artist.

Vollis was one of 12 children. His father, a heavy-machinery operator, couldn’t read or write. Vollis served in the U.S. Army Air Corps in World War II. When he was stationed on an island in the Pacific during the war, he took pieces of a scrapped B-29 bomber and used them to power an industrial-size washing machine for the crew.

That was the start of this.

He came back home and married Jean on January 20, 1947. He joined his brother in a business moving houses. He also opened his own wrecker service, pulling cars out of ditches. Vollis built 14 heavy-duty wrecker trucks in his life. One of them weighed 43,000 pounds and had 12 wheels.

Such a life — waiting for wrecks — leaves a person downtime, so toward the end of his career, Vollis started making whirligigs.

He built them using mostly junk he found elsewhere. He built “every damn one” in a 40-by-60-foot cinder-block shop on Wiggins Mill Road in Wilson County. He’d take an old washing machine tub, attach a rod or two to it, attach a steel duck or two to that, give it some wings, and start somewhere else with more tubs and wings and ducks and airplanes and propellers, and suddenly he’d have a structure. And then he’d have another, and another, until he had dozens. He placed them all on the banks of a duck pond at the intersection of five roads in middle-of-nowhere eastern North Carolina.

Vollis’s signature on his whirligigs is that they glow. He cuts road signs into tiny squares and triangles, and he decorates the entire structures with those pieces. At night, if you shine light on them, the whirligigs reflect. It looks like an amusement park.

Like all sources of wonder, the whirligigs stirred questions among their observers — the main one being, Why did he do it? Vollis insists there isn’t a reason. “Damned if I know,” he says. He never did it to sell. He didn’t do it for anybody else. And he sure as hell didn’t do it because he wanted to make “art.” He just did it. He connected one piece to another, one fan to another, one whirligig after another, put millions of reflectors on it all, and let the wind work.

When you do something others don’t understand, though, they’ll assign reasons to you. For instance, one story circulating says that Vollis’s daughter, Carol, died in a car accident near the site of the park and that Vollis built the entire thing in her honor. In truth, Carol is alive and well, working and living in Kinston.

The assumptions and legends people pasted upon Vollis’s work said far more about the observers than they said about him. And, when you think about it, isn’t that the underpinning characteristic of art?

Vollis remains reluctant to claim to be an artist. But this is clear, too: Underneath that rough exterior and all of those “hells” and “damns” that exit his mouth, Vollis stores a bit of romance. Let his wife explain:

“He used to come home from moving a building,” Jean says of Vollis’s earliest working days, “and he’d stop on the side of the road and pick up bouquets of flowers to bring me. He never brought any from a florist, but these were worth a million dollars to me.”

Flowers wilt. Steel rusts. It’s the things we can’t touch that live on.

Vollis shakily moves about the warehouse, clicking his walker on the concrete floor with each step. Several people come to see him. Women kiss him on the cheek. The people assigned to the project just want to spend time with the aging artist who created all of it. One of those people is Juan Logan, a retired painting teacher from the University of North Carolina at Chapel Hill. Logan’s job is to manage the exteriors of the whirligigs. He’s in charge of surface treatments for each piece, including color matching existing paint, treating with tannic acid to arrest any rust, priming with an epoxy mastic, coating with industrial polyurethane paint, and sealing with a clear coat. Logan knows colors as well as anyone, and it’s his job to match the color of each piece to its original color — it’s his job to see through the rust. Logan can see the blue through something that looks all brown. “Color,” Logan says, “reflects from the inside.”

As Vollis walks around, he sees some pieces so rusted they had to be replaced completely. He sees others that haven’t spun in years, spinning again. Two aluminum men, turned by a windmill, saw back and forth. A dog’s tail wags. These things he built to move are moving again.

“They’re about better than new,” he says.

He touches most of his pieces with his giant hands, and he remembers where they came from. Seeing his life’s work back in motion pulls a smile from his gut. Someone from the crew asks him to put those hands on a big steel sheet, and he traces Vollis’s hands in marker. The crowd takes turns placing their hands well within the outline of Vollis’s. Then most of them go back to work. There’s plenty to do. The Vollis Simpson Whirligig Park is scheduled to open in November. When it’s done, about 30 of Vollis’s finest whirligigs will stand in a field again, finished and primed and prepared for the elements.

And years from now, long after Vollis is gone, someone will visit Wilson and look up and wonder what these things are and why they’re here and who built them. Then the earth will provide an answer, softly tossing a breeze past the onlooker’s ears and toward the big windmills. Things will begin to move. One turn will lead to another, and the artist’s masterpieces will spin together freely again, pardoned of rust and wear, at least for a little while.

Vollis Simpson Whirligig Park
Learn more about Vollis Simpson and the project to restore his whirligigs at wilsonwhirligigpark.org. The park opens in Wilson in November 2013.

Michael Graff is the writer-at-large for Our State magazine. His most recent stories were “It Takes an Orchestra” and “Maggie Valley” (December 2012).