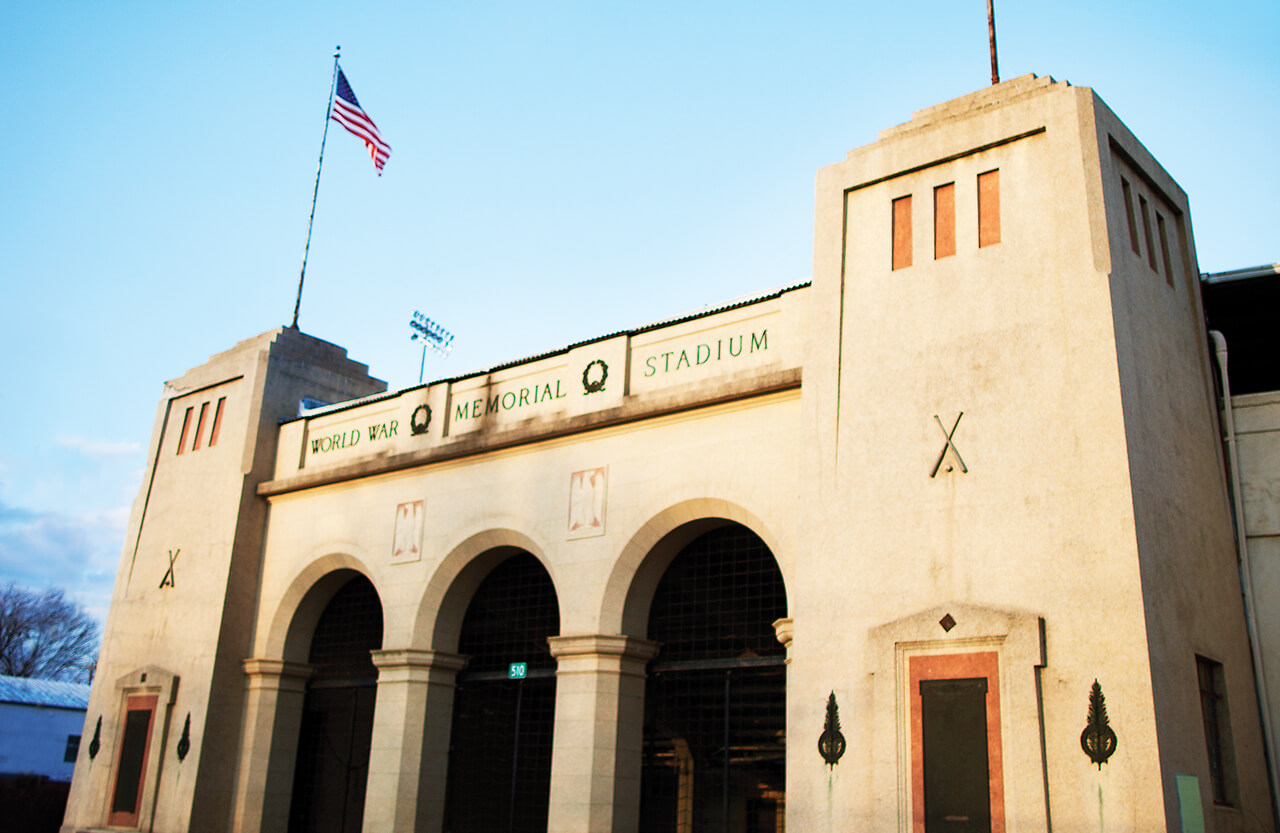 On Armistice Day in 1926, eight years after the conclusion of the Great War, Greensboro mayor Edwin Jeffress stood in front of the gleaming arches of the new World War Memorial Stadium. He dedicated it to “the soldier boys” who “wanted no hollow granite,” but “something that would be useful; that would help develop mind and body … a perpetual memorial to those who have passed.”

For 75 years, beginning in 1930, Greensboro baseball teams inhabited the park on the eastern edge of downtown, first as the Patriots, then as the Red Sox, Patriots again, Pirates, Patriots again, Yankees, Patriots yet again, Hornets, Bats, and finally, in 2005, the Grasshoppers. Batters sauntered up to the plate and knocked red clay off their cleats, brushed it off their pants after sliding into home. Pitchers guarding bases peered from side to side like anxious birds. The occasional exclamation mark of bat-meets-ball roused crowds, but more often than not, people visited War Memorial Stadium to slow the pace of life to a stately stroll. At War Memorial, dreamy summer evenings stretched on and on.

But in 1998, when former mayor Jim Melvin joined a group of investors to buy the Greensboro Bats, the stadium he inherited worried him.

“The deterioration was so bad,” he recalls. “To keep using it would mean tearing it down.”

Melvin decided to build a stadium a mile west, right in the center of downtown. The new park has renewed interest in older buildings nearby. The old ballpark has not been so lucky.

“War Memorial has a great history,” Melvin says. It’s received visitors like Jackie Robinson, Mickey Mantle, and Derek Jeter, and has been used as a filming site for Leatherheads and Bull Durham. But its minor league heyday has passed. Several bond measures to save the park have failed. Meanwhile, chunks of concrete break off in the stands, exposing rusted rebar. The pebbled facade allows water in and is decaying rapidly. The stadium threatens to fall victim to “demolition by neglect.”

Still, the old ballpark holds decades of memories of triumphs and losses, and those are hard to recapture once the park is gone. Nearby resident and preservationist David Wharton fondly recalls taking his young family to the park for nine-inning vacations. It’s an experience he would like to pass on to others, but he’s also keenly aware of Mayor Jeffress’s dedication, especially since his own son serves in the Army.

“If it were just a stadium, it wouldn’t be a problem to knock it down,” he says. But Mayor Jeffress named it a living memorial to American veterans.

Wharton looks at the old park and sees many possibilities: N.C. A&T plays games there. Locals flock to the Greensboro Farmers Curb Market next door for fresh tomatoes and squash. The city has joined with private investors to build a performing arts center nearby, and new proposals for the ballpark are springing up. This might be just the thing to renew interest in the area of east Greensboro where the stadium still — barely — stands. And just in time.

On spring afternoons, you can tell there’s life yet in World War Memorial Stadium. Flags flutter atop the square towers that flank three arched entryways. If A&T is playing, you can hear the crack of the bat and the hum of happy fans. The minor leagues may have moved on, but this is no hollow granite. It is a cathedral of baseball, a monument to memories.