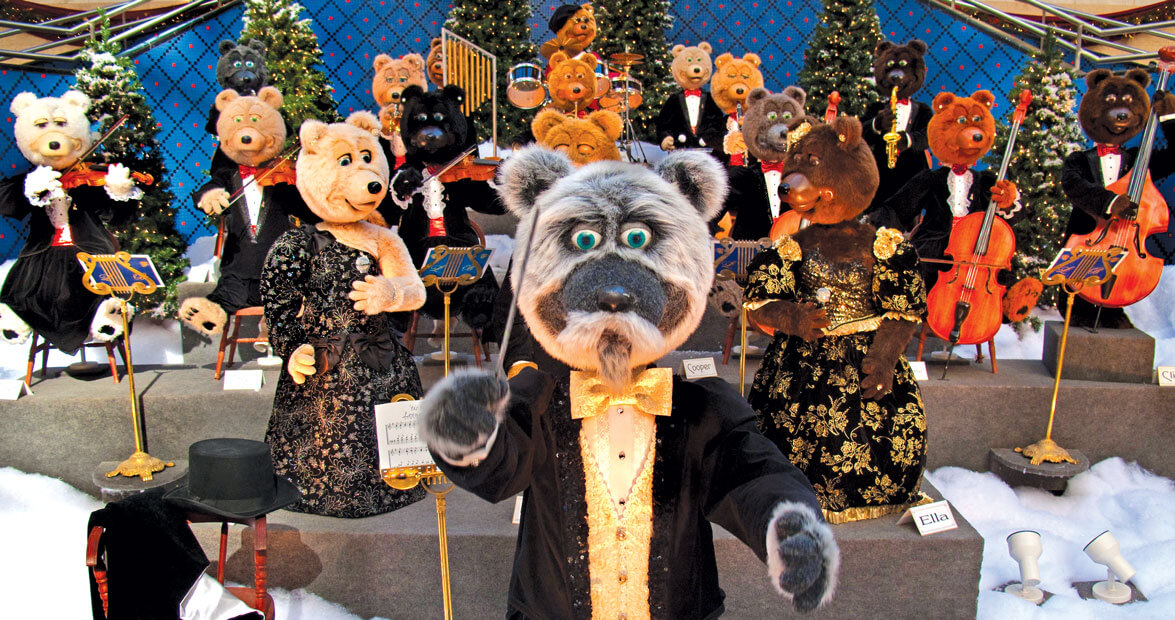 Micah Blatchford didn’t expect this. The four-foot-tall plush bears in the orchestra before him lift their heads, blink their eyes, and adjust the musical instruments and microphones in their hands … er, paws. The other children don’t need Micah to point this out; the moving bears command their full attention already. But Micah, wearing reindeer antlers and a Batman hoodie, revives his alert to the masses, this time with emphatic pointing: “They’re moving! They’re moving!”

Indeed, Maestro Leonard Bearstein turns and announces to the 20 children gathered at the small white fence around the stage that the show will begin in two minutes. Then, the bears freeze in their poses. Two minutes means very little to kids — somewhere between right now and never. So they wait, barely blinking, in case it means the former. Never before have I seen so many toddlers so quiet and still for two minutes. In a row.

Before the spell is broken, the fuzzy players come to life again, performing “It’s the Most Wonderful Time of the Year.” Children hold on to the top rail of the fence while jumping up and down. Some sing. A couple  of jaws drop open. Micah stands still, eyes fixed on the bears. He had been right all along.

Attendees can talk, sing, dance, and even race each other during a Bearstein performance.

This is my fourth year seeing the Leonard Bearstein Symphony Orchestra. Each December, I come to the atrium at Founders Hall mall in Charlotte with my family, three generations of us. My niece Sydney and nephew Henry come to watch the bears; the rest of us come to watch Sydney and Henry watching the bears. The show never changes: It’s a 45-minute set of Christmas songs performed by 18 animatronic bears. Performances occur a few times per day, increasing in frequency as Christmas draws nearer. It’s free, and no tickets are necessary. Just show up and settle into a place on the floor or onto a bench, and wait for the bears to begin.

The first year, Henry was a baby, sleeping through the performance in his grandma’s arms. Sydney was 3, and when “Frosty the Snowman” and “Jingle Bells” began, she leapt up and did the little-kid shimmy, all hips and elbows, that instinctual dance that children do when they hear their jam.

We’ve come each year since, and each year, I marvel. Kids shouldn’t like this, I think. Kids who have screens full of crazy computer-generated special effects should have higher technological standards. Sure, when I was a child in the 1980s, I loved few things more than a raucous show by Munch’s Make Believe Band, the animatronic Chuck E. Cheese performers. But those were simpler times, back when Teddy Ruxpin amazed. How is it that animatronic dolls still captivate little eyes?

Yet they do. And the only proof one needs is how earnestly these kids applaud the bears at the end of each song.

This isn’t about bears, of course. This is about magic. Maybe that explains the divide in this audience: a lot of children under 6, a lot of adults watching those children, and not many ages in between. The little ones are too young to realize that magic isn’t real, while their parents and grandparents are old enough to wish that it were.

The fact that the bears continue to perform well into the digital age is, I suppose, its own sort of magic. This is the orchestra’s 20th anniversary. The band has never broken up — or broken down. These are the original bears, meticulously cared for by Todd Alexander, who’s been involved in the show all along and has run it for six years. He grooms the bears’ fur and carefully lint-rolls their costumes. His wife, Jessica, who helps him set up and take down the bears, teases that Todd treats them like his children; their kids, when small, used to call them “Daddy’s bears.” Todd notes that drummer Gene will need a new sequin jacket next year. “It seems faded,” he says. (I’m standing a few feet from Gene, and his jacket looks just fine to me.)

Todd programmed these 18 bears two decades ago, when he barely knew how to turn on a computer, he jokes. But he taught himself enough programming to choreograph the show so that each mouth moves to the lyrics; trumpeter Wild Bill stands on cue for his solo; and Gene drums to the beat. Their eyelids move at random.

Each year, Todd attends the show as an audience member to see the kids jumping by the fence and singing along, the parents cracking smiles. To be a part of creating Christmas magic is no small privilege. “I still think that make-believe is big,” he says. “A lot of people think the bears are scary-looking or hokey, but the people who get it are the Christmas fans. They’re the ones who decorate their houses, who go all out, who love to celebrate.”

On the same block, just around the corner, is the Belk Theater, the principal home of the Charlotte Symphony Orchestra. Patrons should know a few distinctions between attending LBSO and CSO shows: For one, attendees can talk, sing, dance, and even race each other during a Bearstein performance. I’ve seen good-natured wrestling matches break out here. Belk Theater, however, frowns upon such behavior. The dress code for LBSO is come-as-you-are. Some parents bring kids dolled up in holiday wear: girls in red tulle skirts and boys in reindeer sweaters. Other kiddos come in sweats, tees, or pajamas. The bears don’t judge. Jammies at CSO, however, might garner a little side-eye.

This year (like every year), we’ve come to LBSO in our usual December state — frazzled but full of holiday cheer. Only four of us could make it this time: Henry, Sydney, their mom, Moira, and me. We sit on the floor up front, surrounded by toddlers hopped up on sugar. Henry’s now 4, and he uses the time between songs to try to con me out of a Christmas cookie he just gave me. Sydney’s 7 and — it breaks my heart to say it — a little bored. I think of her in previous years, bouncing in my lap with so much Christmas joy that her little body seemed at risk of exploding into tinsel. Now, she’s still. We’re both a little bummed that things have changed.

Sydney prefers to stand to the side of the stage, away from the “little kids.” I stand with her, wondering when the label stopped applying to her. To distract us from the irrevocable march of time, we analyze the bears’ attire: Gene’s sequin jacket is a fashion win, although we feel that black-tie bears really should make the effort to wear shoes. Then, the maestro begins “Jingle Bells” — Sydney’s Christmas jam. Her eyes widen, and a smile emerges. For a few seconds, ever so subtly, she does the little shimmy. I smile at this gift of Christmas magic, a little girl dancing to the bears one more time. I hesitate to call out to Moira: She’s moving! She’s moving!