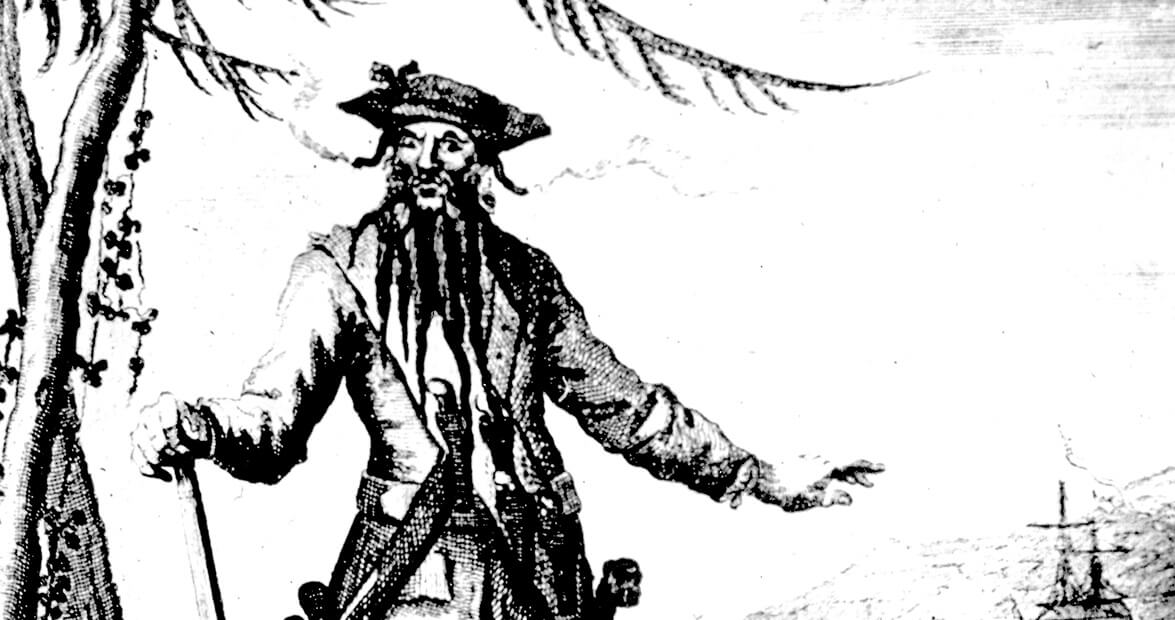 I once had a long-term substitute teacher, whose last name was — and I’m not making this up — Teach.

She’d regularly remind students of this fact when she wanted to reclaim control of the classroom from a brood of rowdy 8-year-olds hopped up on sugar after yet another mom sent in cupcakes for her child’s birthday. (Oh, cupcake days, miss ’em. Oh, teachers, bless ’em.)

The clamor of shuffling feet under desks would immediately taper off to a silence. She’d continue by saying how Blackbeard’s believed name was Edward Teach and how there was a strong possibility that she might be a descendent of the infamous pirate.

Had it been any other year, Ms. Teach’s remarks about her last name probably wouldn’t have inspired as much fear as they did those days in fourth grade, when our entire history curriculum centered on North Carolina’s past.

Fresh on the brain were fantastic images of buccaneers, of plundering, pillaging, and effectively terrorizing the coast of summer vacations spent. A child’s imagination is a hard place to separate fact from fiction. If there was a lesson to be learned here, it was to never test your luck with a person whose last name is Teach.

But maybe, just maybe, our perceptions of 18th-century pirates and who they were have been largely wrong all along.

That was the surprise I had in store for me when setting out to explore the reason why many pirates seemingly found a haven in North Carolina’s waters.

I had heard before that the shallow inlets of the Outer Banks made it easier for pirates to hide their ships when they ran aground and were in need of repair. Evidently, that’s a story a lot of people have heard over the years.

The problem is, though, that this theory, like the many others about our pirates and their relationship to the North Carolina coast, doesn’t hold much water when you begin to think about it.

“The shallowness of the inlets and the intricacies of the inlets gave no benefit whatsoever to pirates because they weren’t any more knowledgeable or skilled to navigate shallow waters than their comrades who were honest merchant mariners,” says Kevin Duffus, a historian whose areas of expertise make up the coastal, lore-lending trifecta: pirates, shipwrecks, and lighthouses.

In fact, one of our state’s most famed shipwrecks involved Blackbeard, who tried to sail his ship, Queen Anne’s Revenge, into what is now Beaufort Inlet. Knowing how treacherous the inlet’s waters were, Blackbeard intentionally crashed his ship as part of a larger scheme to get rid of three-fourths of the people in his pirate company.

“In modern terms, it’s like a business owner or corporate executive filing for bankruptcy to retain the equity they have in the company,” Duffus says.

So, if North Carolina’s inlets weren’t appealing to pirates, then what was?

The less-than-thrilling answer why a large number of pirates frequented our waters is that North Carolina was simply a stop along the way from the Caribbean to large colonial ports like Philadelphia, says Duffus, letting me down easy.

But, that doesn’t explain why Blackbeard, the most recognizable of them all, intentionally sought out Ocracoke as his primary haunt, Duffus tells me. I hold on with bated breath.

It wasn’t too long ago that most historians believe he happened upon the area by accident, but there’s evidence to suggest that wasn’t the case at all.

“His closest, most trusted allies were residents of the Pamlico River,” he says.

That’s what is key to remember. Pirate or not, practically no one’s hands were unsoiled back then. Enforcement against piracy was next to none, considering the act was oftentimes encouraged by authorities, so long as they got their cut of the goods.

The Graveyard of the Atlantic presented an opportunity for not only pirates, but also everyday North Carolinians to plunder ships in distress through an act referred to as “wrecking.”

“Instead of rescuing anybody, they tried to rescue cargos for their own gain,” Duffus says.

This all sounds incredibly brutal to us now, but piracy, smuggling, and wrecking were essential to the survival of those residing in North Carolina, which was the least developed of the colonies at the time.

It didn’t help that England and even neighboring colonies had enacted a number of trade restrictions against us, Duffus says. For instance, Virginia banned the trade of North Carolina tobacco within its borders.

It was rough out here.

Piracy began to drop off following the captures and killings of Stede Bonnet, who was another well-known pirate, and Blackbeard.

When England entered into another war with Spain, most remaining pirates turned themselves in and accepted pardons from the king, who wished to commission them as privateers.

The Golden Age of Piracy has long been over, but the lore still strikes up fear in our imaginations.

“We basically relate to pirates because of the movies we’ve seen,” Duffus says. “We really don’t think that they were people, too, and that they were once children who learned about the world at the knees of their parents.”

Plus, as far as we know, there’s no historical evidence to suggest that Blackbeard ever hurt or killed anybody. Those menacing smoking ends of his hair and beard? All just a ruse.

Sorry, Teach. The both of you. You can’t scare me anymore.