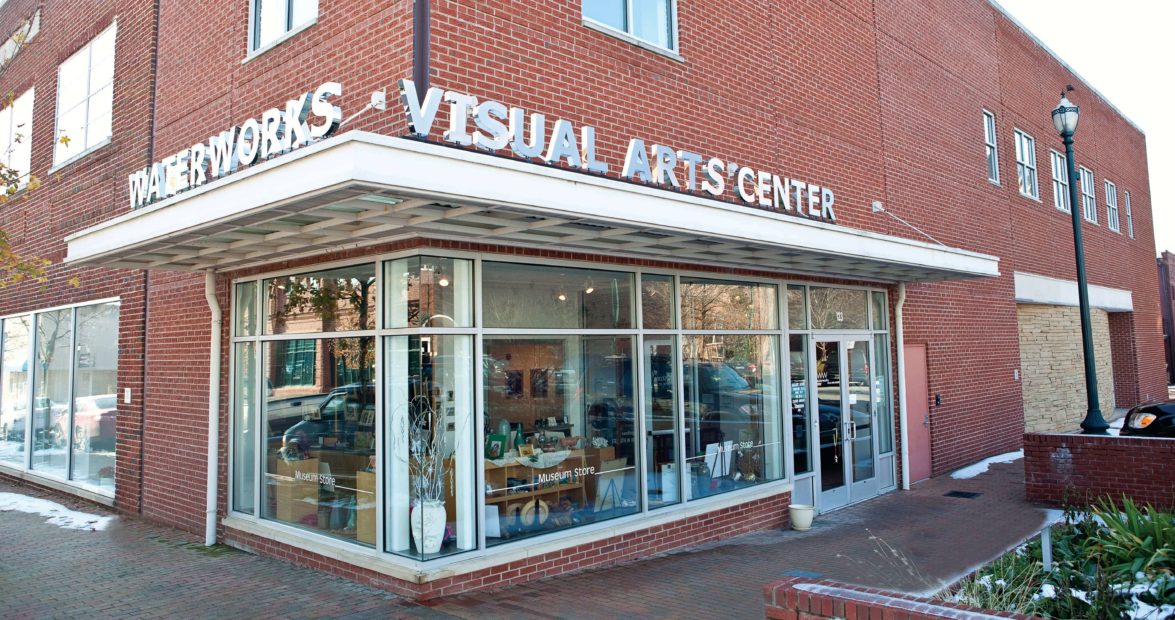 Jenn Selby sampled fine arts for the first time the same way generations of Rowan County children do — in classes at the Waterworks Visual Arts Center in Salisbury. Spending afternoons smearing her fingers in paint and molding meaningless lumps of clay into sculpted shapes, the child discovered an interest that carried into adulthood. And after completing her fine art graduate degree in London, Selby returned to Salisbury, and to the Waterworks.

“I immediately re-immersed myself in activities at Waterworks,” says Selby, who now serves on the board of directors in addition to teaching and exhibiting her work at the center.

Selby isn’t the first kid to discover a love for art at the Waterworks. In the more than 50 years since the fledgling nonprofit Rowan Art Guild formed, thousands of Rowan County children have experienced fine art for the first time through the guild’s centerpiece achievement. Today, the Waterworks is an accredited museum, housed in a sleek brick-and-glass building that contains several galleries, classrooms, and studios. “We feel like we’re the best-kept little secret,” says Anne Scott Clement, executive director. “Here we are, right here in Salisbury, and we have an accredited museum when there are only about 700 in the whole country.”

From guild to gallery

In 1959, Salisbury was better known for Cheerwine and textiles than art galleries. But a small group of local artists joined to form an organization to support and promote visual arts in the area. The guild eventually set up shop in Salisbury’s original waterworks plant in 1977. In 1986, the group adopted the name of its home and became the Waterworks Visual Arts Center.

“The arts group wanted, most of all, a permanent gathering place where members could go to paint, have classes, study, and have gallery space for exhibits,” says Lib Taylor, one of the Rowan Art Guild’s founding members. “We were a grassroots group, and members worked diligently with their bare hands to transform the old water department into our first home.”

Throughout the years, the center made a name for itself by showing the work of local artists. But art classes, and the school field trips that brought long lines of children shuffling through the galleries, cemented Waterworks’s place in the community.

“It’s what the children pick up as they go through exhibits and learn the meaning of them,” says David Setzer, executive director of the Blanche and Julian Robertson Family Foundation, which helps support Waterworks. “It’s what they get as they dip their fingers into the clay when they do art projects during their visit. It plays a big role in their lives for years to come.”

Inside the historic brick building, stark white-walled galleries serve as the backdrop for rotating exhibits such as video installations, intricate charcoal drawings, and the colorful creations of middle schoolers. Upstairs, the smells of paint and clay permeate the air of classrooms alive with the activity of children participating in hands-on art projects.

Inside these busy classrooms, Selby has come full circle. The former student now guides her own pupils, one day teaching basic concepts to elementary school children, the next exploring technique in adult education classes.

“For me, teaching is the most incredible experience,” Selby says. “I love the enthusiasm of the students. … I get so much back from [them].”

‘A form of self-expression’

Each year, between 2,500 and 2,700 Rowan County students from public and private schools visit the museum for an art stop — a program that coincides with the schools’ curricula. They tour the galleries and have the opportunity to participate in a hands-on art activity. The art stop allows children to go beyond their traditional art classes, putting them in a setting where professional artists create and share their work.

“Through art, they learn about themselves, they learn about community, they learn about politics,” says Clement, the executive director. “And when they interact with this artwork, it’s a learning process for them, and it teaches them that it’s OK to express yourself, and there’s no right way or wrong way to do art. It’s a form of self-expression.”

Several new developments are on the horizon as the center embarks on its next 50 years. One major addition, open this year, is a new photography darkroom. After speaking with some local parents who wished their children could have had access to a darkroom before they went away to college, the center’s staff saw an opportunity.

“We thought it would be cool to have our own darkroom here,” says Clement. “It’s a black-and-white darkroom. We’re hoping to partner with colleges around town so that they’ll be able to use the studio, along with local artists who use photography as an art form.”

The partnership will serve to deepen the relationship between Waterworks Visual Arts Center and the community. The center’s remarkable transformation, from a small center for local artists to an artistic hub for the region, stands as a testament to the community’s dedication to promoting and preserving visual arts. And for those remaining members of the original Rowan Art Guild, it’s the realization of a dream born more than 50 years ago.

“I love to brag about our city and all its cultural organizations,” says Taylor. “Indeed, this is a special place.”

Jennifer Bringle is a freelance writer living in Greensboro.