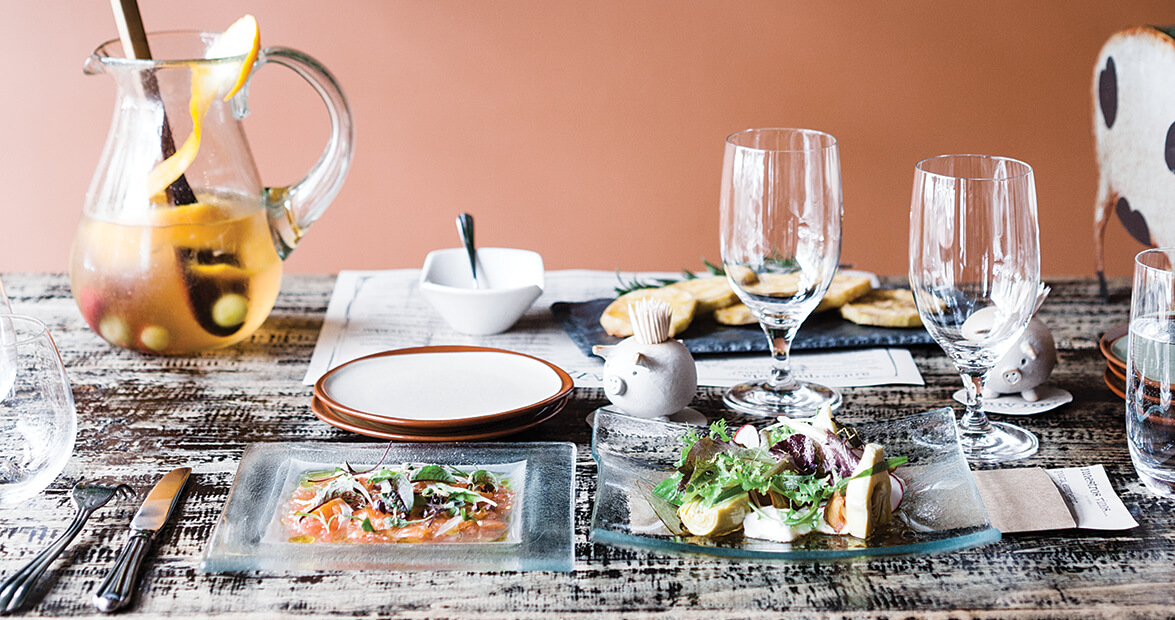 There’s no better seat in the house than at the long, kitchen-facing bar at Cúrate. From here, Chef Katie Button and her kitchen brigade are in full view as they prepare plate after tiny plate of Spanish tapas for a hungry — and packed — dining room. The energy emanating from the kitchen is palpable and energizing, which becomes obvious as the evening wears on and the rhythm of conversation picks up, and grows quicker. Tapas, the small, sophisticated, often shared dishes, are the perfect accompaniment to the pace. Order several — tabla de jamón (assorted cured hams), potato chip-wrapped chorizo, fried eggplant and honey (better get two of these), rossejat negro (a paella-like squid ink dish), and whatever catches your interest coming off the line — to sample the menu. Then try to keep up as your meal arrives, and the conversation heats up.

The Dining Room at the Inn on Biltmore Estate Asheville

For an elegant meal worthy of the Biltmore name, look to the inn. The Dining Room at the Inn on Biltmore Estate embodies the ideal of the working estate George Vanderbilt had in mind when creating Biltmore; chefs use lamb and beef raised right on the estate, and much of the produce is grown on property just out of the visitors’ lines of sight. Dinner is a tasting menu of either three or five courses, and each plate shows off head chef David Ryba’s flair for high-end regional and seasonal cuisine. It’s difficult to choose between the spring lamb and wagyu beef strip steak. Go with friends, get both, and share.

It feels like a dive bar — a charming dive bar, from a movie — but the food calls up white tablecloths. Cinderblock exterior, dim lighting inside, dark wood, deep booths, and a bartender who takes no lip from anyone add to the atmosphere. As do the aromas wafting from the kitchen. Pork chops on the grill, sizzling cheeseburgers, ramps and ginger and onions all come together in mouthwatering scents. On the other hand, step away from the flames. The Admiral has, hands down, one of the best raw dishes in their beef tartare, which arrives on a cutting board the size of an end table. Every pile of salt, every streak of hot sauce, and every dab of mustard on the board pushes the beef in a new direction.

White Duck Taco Shop doesn’t look like anything special. The tables are plain. The chairs are plain. Then you get to the tacos, and understand why White Duck Taco Shop is so popular. Where else can you get a bánh mì tofu taco, a duck taco with mole sauce, a lump crab or Korean beef bulgogi taco? Nowhere.  The variety of flavors means you think about White Duck the next day, and the day after, craving just one more. Their bold, even wacky, approach to the common taco is Asheville personified.

Biscuit Head, fittingly enough, specializes in biscuits. But not just any biscuits:  legendary “cat head” biscuits, so named because each one is the size of a tomcat’s head. Which is to say, big. Inside the bright, casual dining room you’ll find a chalkboard listing the day’s specials — gravies, sides, and entrées — and an entire bar dedicated to butters, jams, jellies, and honeys infused with jalapeño, Sriracha, maple, and herb syrups, and a whole host of other sweet or spicy notions to pile atop your biscuit. Get creative: That biscuit is big enough to sample multiple toppings without them ever touching.

At Rhubarb, Chef John Fleer allows the ingredient, rather than the technique, to be the star, creating deceptively simple dishes out of products grown, harvested, foraged, and hooked in the woods, fields, farms, and waters around Asheville. In taking such a relaxed approach to his food, his restaurant is steeped in that same vibe. At Rhubarb, everyone at the table shares a dish, the conversations lengthen, and the pace of the outside world falls by the wayside. When the frenetic energy of Pack Square is one pane of glass away, this is a feat. Order pork collar or octopus, or accidentally eat a vegetarian meal because the brined cauliflower steak or goat cheese gnudi with wild mushrooms looks too good not to order. 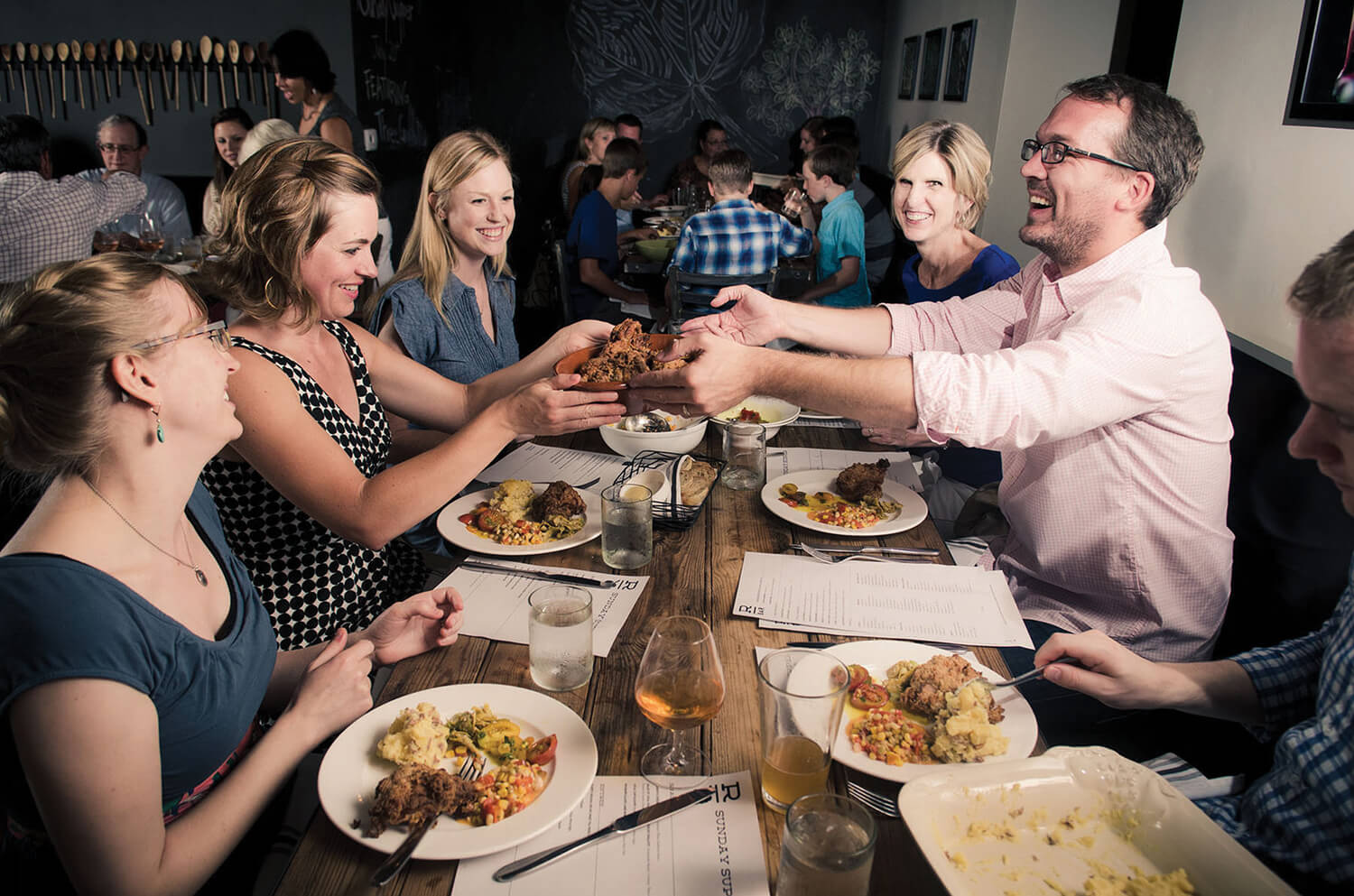 There’s a soothing rhythm to Rocky’s Grill and Soda Shop in Brevard. The clack of tools, the sizzle of burgers, the chatter between the grill operator and whoever’s on duty to plate up the burgers and dogs, the whirr of milkshake machines, and the general hum of conversation. Rocky’s is a throwback to those mythical ’50s meals featuring egg creams and malts. Which Rocky’s has. But while Buddy Holly’s on the radio, Rocky’s is more than nostalgic kitsch; It’s good food, too.

You know the old trope: Breakfast is the most important meal, and Sunny Point has theirs fine-tuned. The dining room at Sunny Point is energetic because the folks at the tables are excited about the food. There’s savory stuffed French toast, ricotta hot cakes, cornmeal hot cakes, and biscuits and gravy; there’s even a breakfast salad. In season, the kitchen harvests everything from herbs to squash to cucumbers to peppers from their own garden. The breakfast sandwiches are legendary among locals. Expect to wait for a table, but trust us: It’s worth the wait.

The floor of the dining room at The Square Root is a marvel. Made up of six-inch-by-six-inch pine blocks cut from tree trunks, the rings radiate, then terminate on the flat planes where block meets block. In places, the rings match up and the effect — circles in squares — is lovely, and mesmerizing. Every evening, what starts as a quiet dining room fills with people and noise and the aromas from the kitchen. Diners reach for their cameras to preserve the moment when dishes such as mountain trout prepared with an Asian flair, duck confit quesadillas, and sweet tea-brined pork rib eye arrive at the table.

Mast Farm Inn Executive Chef Andrew Long wanted a restaurant where he could explore traditional Appalachian foods familiar to the region and his diners, so he opened Over Yonder. The restaurant, on a hill overlooking the original Mast General Store, is in a home built in 1861 and, like the menu, is simultaneously rustic and refined. Ceiling beams of hemlock and hickory felled and milled here; fireplace brick made by “Hard” Taylor, the man who built the home; and floors that have seen countless pairs of boots tread its planks remain intact. Just as authentic is the heavily-seasonal menu, designed by Chef Long and Chef Luke Taylor. You can always expect fresh trout, skillet fried chicken, and phenomenal grits. 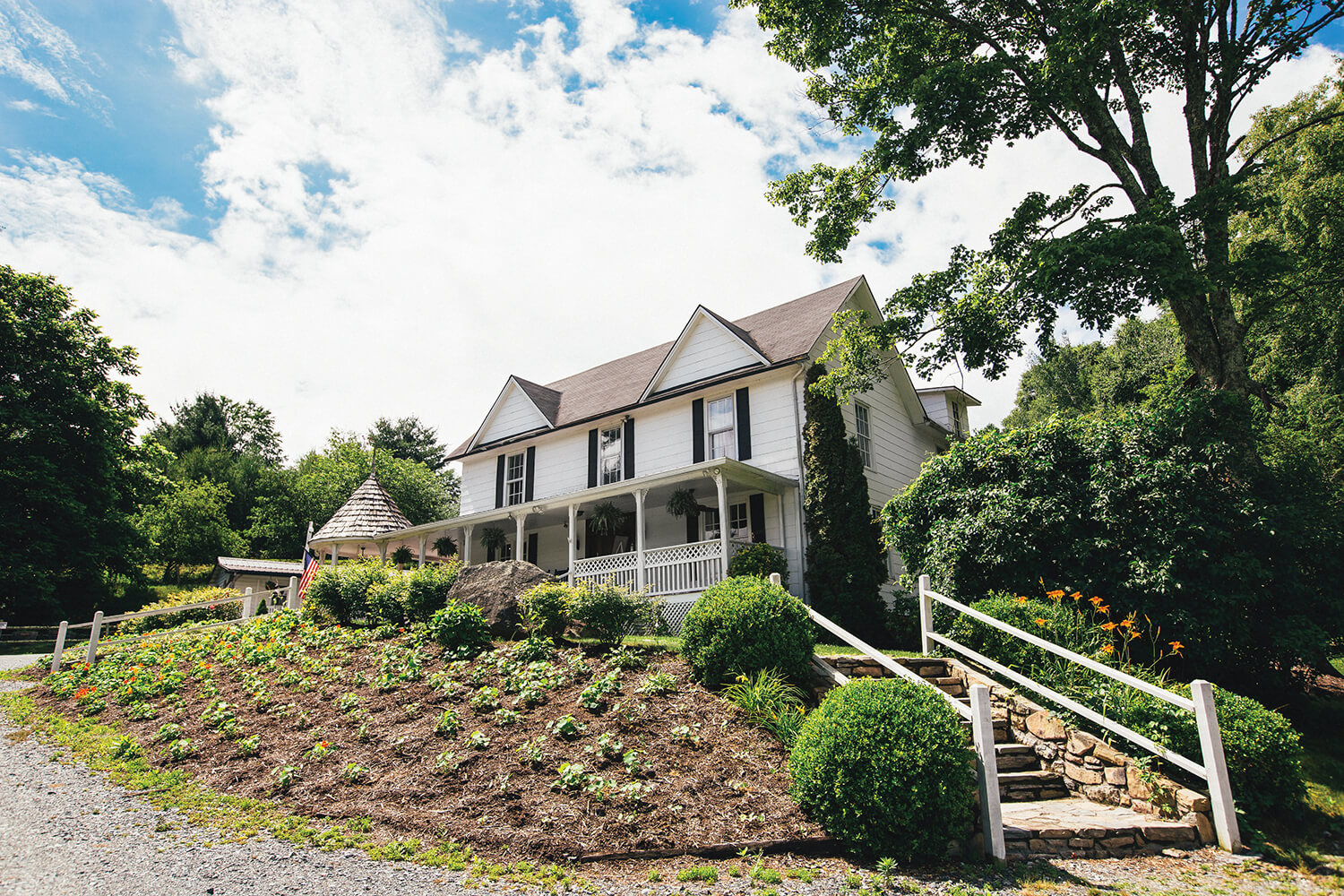 The Gamekeeper Restaurant and Bar opened in 1987 and has been earning accolades ever since, for quality, creativity, and passion. Sourcing their ingredients from local farms, ranches, and creameries, then reaching out beyond the region for exotic game meats — elk, pheasant, bison, ostrich — that are responsibly raised, the offerings at Gamekeeper stay inspired.

In downtown Rutherfordton, a restaurant’s dumbwaiter leads straight to Thailand. That’s one theory, at least, since there’s no other way to explain how Rutherford Thai can serve dish after dish of authentic Thai flavors in this North Carolina foothills town. Except, of course, that the chef and owners all hail from Thailand and Malaysia. Spice levels are tuned to the American palate, but if you like it a little more fiery, just ask: A rack of increasingly hotter sauces, most house-made, will appear.

Who ever heard of an Eggs Benedict Crepe? The folks at City Lights Café in Sylva, that’s who. Head there for a late breakfast of crepes — savory or sweet — then go upstairs and browse the bookshop until it’s time for lunch. By that time, you won’t feel so bad about ordering a glass (or bottle; we don’t judge) of wine or a pint of a local beer to go with your lunch. Whatever you choose, enjoy it outside on the patio where the mountain air makes everything taste that much better.

What do you get when a self-pronounced “science nerd” opens a brewery and wood-fired pizza place with his chef twin brother? Lost Province Brewing Co. That “science nerd” is Andy Mason, who has a Ph.D. in Medical Pharmacology and served as the State Toxicologist for several years before he turned in his lab coat and started turning out brews; and Chef David Mason’s approach to making simple food using local and organic ingredients, especially pizzas, was a natural fit. Here they are in downtown Boone with a dozen beers on draft and a selection of small pizza pies, sandwiches, and even wood-fired macaroni and cheese.

The music at Lulu’s on Main says a lot about the food. During a single meal, you’re likely to hear Elvis Costello, Night Ranger, a Portuguese rendition of David Bowie, Kiss, The B-52s, and The Del-Vikings. On the menu, you’ll find a mix of meat-and-potatoes dishes alongside a vegetarian grilled portabella napoleon next to kimchi pot stickers. It’s the kind of place where the burger is served with a steak knife and the fish tacos are made with mahi-mahi caught yesterday. Lulu’s is popular among Sylva’s local set, and rightly so, as it’s a friendly, funky restaurant in a friendly town.

Sushi in the mountains of North Carolina, some 300 miles from the coast? Here it is. In a stylish dining room, Umi Japanese Fine Dining serves a creative assortment of sushi, sashimi, and nigiri alongside a range of Japanese noodle dishes and some exceptional cooked seafood dishes. The simplest rolls — tuna, salmon, spicy scallop and scallion — are perfect; the complex rolls, with tempura shrimp, or rolled in a cucumber wrap or soy paper, topped with a rainbow assortment of fish, are heavenly. Arrive early and take your seat at the sushi bar. Order a roll at a time and let the chef get to know what you like. Then give him the go-ahead to surprise you; you won’t be disappointed.