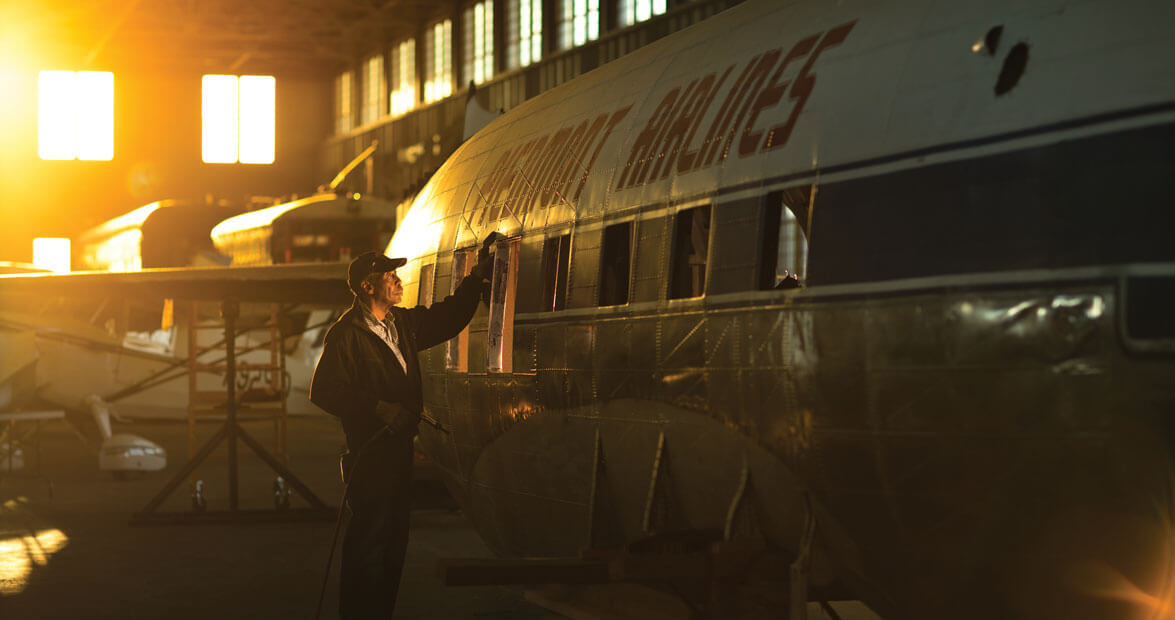 Like other children of the post-World War II era, Bill Wilkerson grew up fascinated with the wonders of modern aviation. By the time he was in elementary school in Knoxville, Tennessee, he had set up a make-believe cockpit in his bedroom, substituting a vinyl LP record for the control wheel and books for the rudder panels.

“My mother never graduated from high school, but she was constantly educating herself,” Wilkerson recalls. “One of the books she purchased was called a ‘self-educator.’ There was a single illustrated page on how to fly. My brother and I would use those instructions to make the proper controls, banking and turning. Then we would look in National Geographic and find some place to fly to.”

What began as a childhood fantasy led to a $5 introductory flying lesson and eventually to Piedmont Airlines, where he worked for nearly 33 years and earned the rank of captain in 1980. Wilkerson was the third African-American pilot that the airline hired. He met his wife, Tisa, when she worked as a flight attendant on one of his earliest flights out of Roanoke, Virginia.

Even now, at age 71 and decades after the company was absorbed by USAir (now American Airlines), Wilkerson considers himself part of the Piedmont family. So every other Saturday, he joins other volunteers at the NC Transportation Museum in Spencer, to oversee the restoration of one of the airline’s first passenger planes, a worn DC-3 that logged 48,000 hours.

To understand the passion that Wilkerson and so many other former employees have for Piedmont, it helps to understand the man who built the airline and the effect he had not only on the people he hired, but also on the state he loved.

Employees used to call Thomas Davis “Boss Tom.” Davis grew up in Winston-Salem and, like Wilkerson, was infatuated with airplanes. He learned to fly as a teenager and got his start in the business in 1939, as sales manager for Camel City Flying Service. A year later, he bought the company and renamed it Piedmont Aviation.

In a 1987 interview, Davis explained the change: “The strict definition of the name [Piedmont] — which means the area formed at the base of the mountains — technically extends all the way from Alabama to New York.” Eventually, his airline would, too.

Under Davis, the company continued to sell airplanes, and during World War II, it also helped train military pilots. It was after the war ended that Davis reinvented Piedmont as a passenger airline. The initial fleet consisted of three used DC-3 planes — D for Douglas, C for Commercial.

Davis was only 29 when he boarded the inaugural Flight 41 on February 20, 1948. The plane taxied onto the runway in Wilmington and into North Carolina history. That first flight “puddle-jumped” to Pinehurst, Charlotte, and Asheville, then to Tri-Cities in Tennessee and Lexington in Kentucky, before ending the route in Cincinnati, Ohio. “It was really our only homegrown airline,” says Walter Turner, a former historian at the NC Transportation Museum. 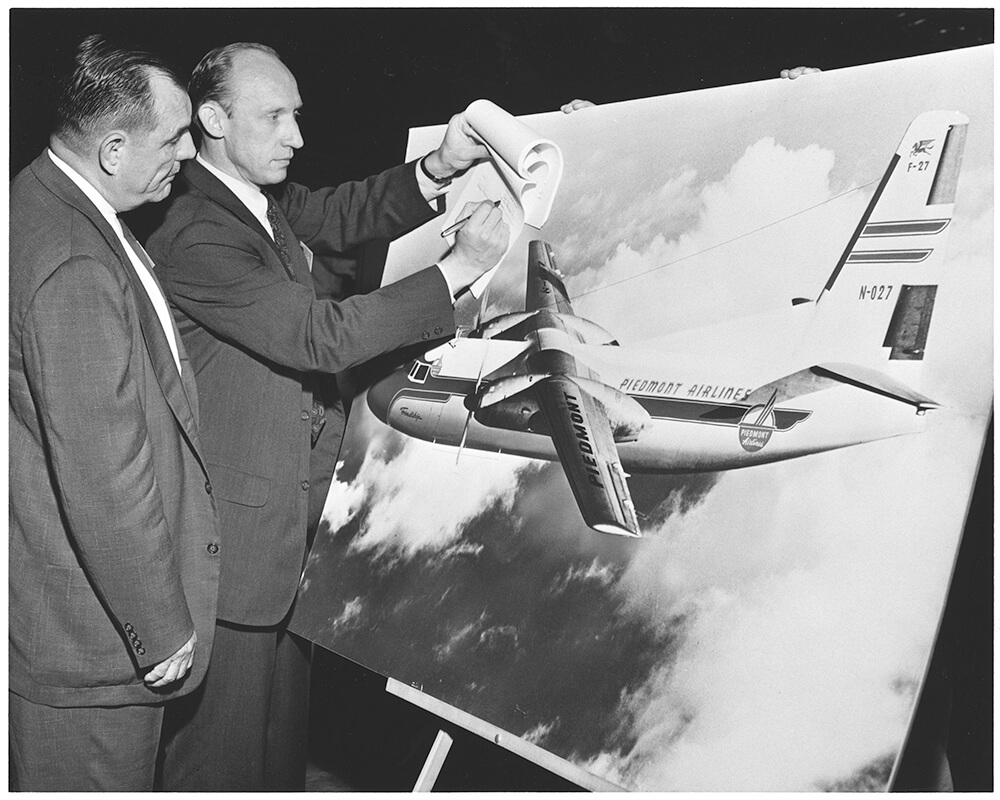 As company president, Davis endeared himself to employees — from airplane captains to “ramp rats” — by remembering their names. If he was on a flight, he helped agents unload the bags. “He was a very dominant figure without being dominating,” Wilkerson says. “He was extremely well-liked.”

Henry Huff, who worked as an electrician and then an inspector for Piedmont in Winston-Salem, remembers an unexpected encounter with Davis. Huff, now 79, was changing out the hydraulic pressure switch on a YS-11 twin-engine propjet and had shimmied into a space known as the “hellhole” beneath the flight deck. “Just about the time I got it changed, I felt this pull on my pants leg and heard someone asking, ‘How much longer?’ ” Without looking up, Huff handed out the switch covered in hydraulic fluid. “That’s when I realized who it was. I gave him a clean grease rag to wipe his hands on. And then we got to talking. He always knew who you were.”

When Davis stepped down as president in 1983, Bill Howard took over. By then, Piedmont had become the 10th-largest airline in the United States, and the 17th-largest in the world. When USAir bought Piedmont in 1987, it had an annual revenue of $2.5 billion. The airline’s DC-3s had long since been retired, and Wilkerson was flying Boeing 727s and training other pilots on the jet aircraft.

“That was an amazing transformation from puddle-jumping from one little airport to another at low altitude to flying flights to the West Coast of the United States and eventually to Europe,” Wilkerson says. “It was exciting.” 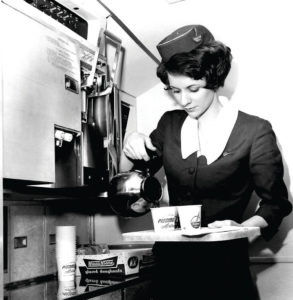 If you flew Piedmont back in 1966, you might remember the uniforms that flight attendants wore, but you definitely recall the complimentary coffee and Krispy Kreme doughnuts.

Turner traces Piedmont’s rise to the airline’s willingness to collaborate with other airlines, with local communities, and with airports — especially in creating the Charlotte hub in the 1980s. Piedmont’s success, in turn, helped fuel the growth of Charlotte Douglas International Airport and the surrounding region, says Roy Johnson, who was principal architect for the airport and is an executive vice president and secretary of the board of the NC Transportation Museum Foundation.

“I say to people now that the aircraft sound that goes over your house is the sound of money,” Johnson says. “It’s the economy of the whole region connecting to the world. I can’t think of a jobs announcement in this area from the 1980s on that, when asked why they picked Charlotte, didn’t list the airport as the No. 1, No. 2, or, worst case, the No. 3 reason. That goes right back to Piedmont.”

Because of Piedmont Airlines’ significance to North Carolina, Johnson says, the NC Transportation Museum will make one of the two centerpieces in its aviation exhibit the DC-3 that Wilkerson is helping repair. The other centerpiece is a replica of the aircraft that completed the first powered flight ever, the Wright Flyer from Kitty Hawk.

On a Saturday afternoon, Wilkerson and 10 other airplane buffs gather at the museum in an enormous warehouse called the Back Shop, where mechanics once repaired steam locomotives. The wingless fuselage of the DC-3 rests as an empty hull, only its outside aluminum “skin” intact. The wings and other parts are scattered about, with volunteers assigned to different repairs.

Joel Moore, who worked in customer service for the airline, and Bill Behrendt, an electrical engineer, are fixing the engine mount. Behrendt slips a rivet through a hole in the metal.

“OK! That’s a good length,” Moore calls out from inside the mount. “Hit it!” 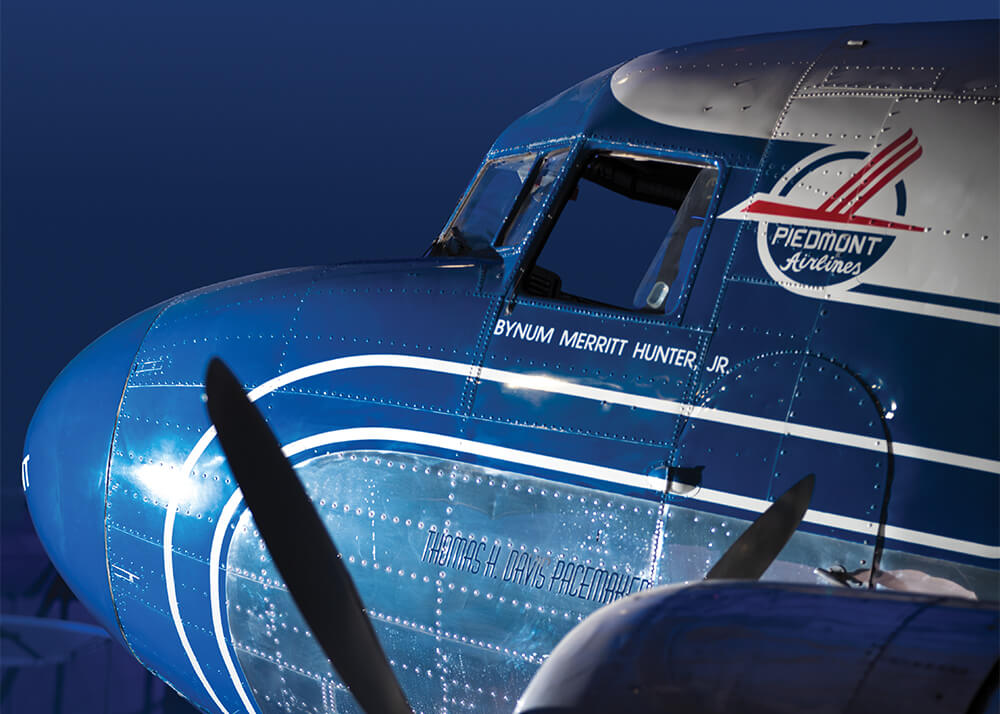 An iconic blue-and-white DC-3 prop plane, with which the airline was synonymous, has found home at the Carolinas Aviation Museum in Charlotte.

Behrendt drives the rivet through the metal, a loud rat-a-tat-tat reverberating through the warehouse. Moore braces against the rivet with a tool called a bucking bar that flattens the tail of the rivet, securing it in place.

“Again!” Moore calls out. Behrendt holds the trigger down. Rat-a-tat-tat!

Rivet by rivet, piece by piece, airplane enthusiasts have devoted hundreds of hours over 10 years to repairing the old “Three.” When the pieces are put back together, Wilkerson believes, it will be more than an airplane. “It will show,” he says, “how Piedmont changed flight.”