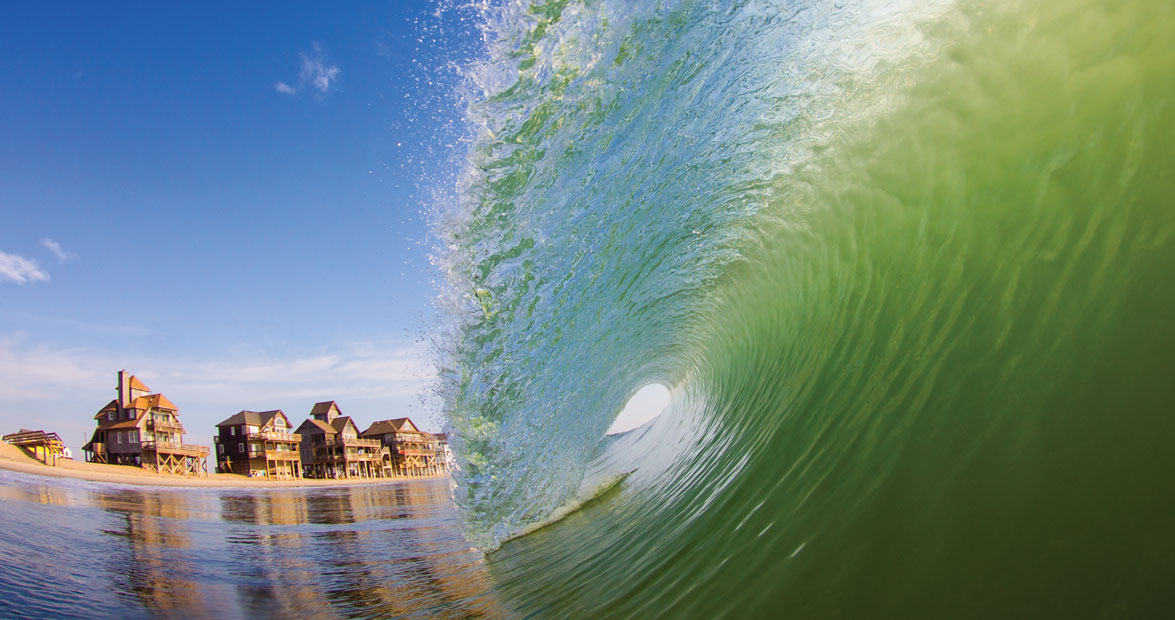 Everything is alive and everything changes. In Rodanthe, this is not an abstract idea but an undeniable and deeply felt reality. Driving through Cape Hatteras National Seashore, the evidence for that is overwhelming. Highway 12 is a two-lane road that cuts through Pea Island National Wildlife Refuge, which includes 5,000 acres of maritime forests and marshlands that are home to hundreds of varieties of birds. On one side of the road: swaying marsh grasses and a rippling soundside pond. On the other: waves breaking onto a beach dotted with shell seekers, sandcastle makers, a few joggers. Clouds tumble overhead, and a whipping wind bends the sea oats. No day for sunbathers, but surfers are out in force.

The ocean is reclaiming this road built on sand. Highway 12 is frequently closed due to high winds, storm surges, and reconstruction. When that happens, schools shut down, and plans to leave town must be set aside. Which means: more time to surf. This land’s capricious nature has shaped the character of the community as surely as it has shaped the dunes. The unassuming spirit here is one familiar to surfers: A local café posts a handwritten sign at the door that says, No Wi-Fi. Pretend it’s 1999. Talk to someone. Parents who pick up their children from school can be on the beach with them five minutes later. And those children get to grow up in a town that feels like one shared neighborhood, where everyone knows their name and keeps an eye on them. Which is a good thing, because Rodanthe’s waves can be wily.

Swells from the south hit Rodanthe’s jutting coastline with full force, losing power as they wrap around the island and make their way toward Virginia Beach. These waves, thick and powerful, intimidate even seasoned surfers. Visitors tend to overestimate their size, reporting 12-foot waves when locals agree they’re no more than eight feet. Surfers who come from all over the world to paddle out at Rodanthe Pier or the S-curves must abide by an unwritten code of conduct: Don’t paddle straight out to the peak. Stay off to the side at first and study the rotation in the lineup before moving in to catch a wave. Those who cut in line or disrespect other surfers may be asked to leave.

There are people who surf — and then there are surfers, like those who live here. To settle in Rodanthe is to commit to a different kind of life, one that requires sacrifices and accommodations to this narrow sliver of land. The tourist season is shorter and the hurricane season is longer, but the beauty is more breathtaking, too. Surfers here feel rich even as they make do with less.

When waves are breaking, surfers in Rodanthe cancel other plans — or show up late with wet hair and irrepressible grins. Spend time with them, and you’ll sense something unusual, something you don’t encounter often. At first, it’s hard to name, and then you realize what it is: their quiet, pure joy.

There’s no better vantage point to watch the area’s best surfers conquer the Outer Banks’ unpredictable waves. Old Lighthouse Beach is a half hour’s drive south of Rodanthe. Jetties and sandbags that once protected the lighthouse now help create the notable waves surfers expect to find here. In 1999, when the lighthouse was moved from its original location due to erosion, the spacious parking lot maintained by the National Park Service remained, giving spectators easy access to one of the East Coast’s most renowned surf breaks.

Open since 1989, this surfing outfitter and board-builder on Highway 12 sells its own exclusive brand, Hatteras Glass Surfboards, plus fin screws, wax, board leashes, and much more. They’ll also customize your board for OBX waves. Casual surfing fans and curious beginners are welcome: rental boards, paddleboards, and lessons are available, too. “We’re proud that we can share such a pure experience with so many people,” owner Jason Heilig says. Every summer is a new opportunity for him to see a first-timer develop a lifelong passion.