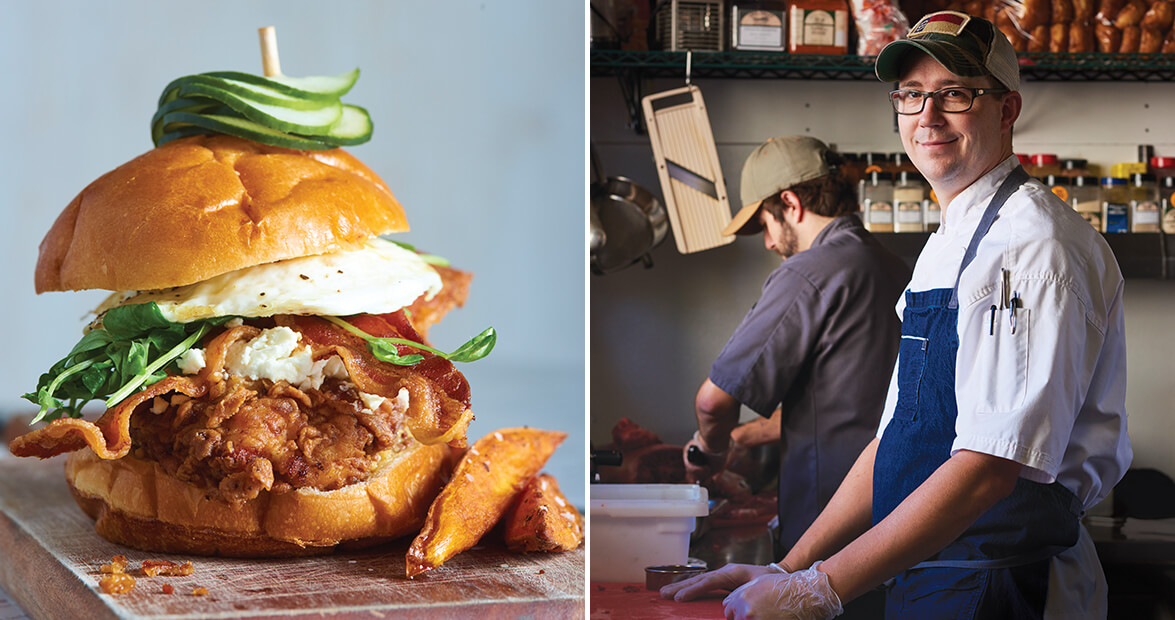 Travis Myers didn’t know how to pronounce crème brûlée. He was 25 years old, a first-year student at the esteemed Culinary Institute of America (CIA) in Hyde Park, New York. He didn’t know how, exactly, he ended up there, either.

For years, Myers had managed various operations for The Gap. He thrived as a leader, but hadn’t found his niche. Then a coworker brought up the CIA — one of the best culinary programs in the world, right in the area. So he enrolled.

Soon, Myers was a student again, eating lunch in a foodie-packed dining hall — trying crème brûlée for the very first time. He couldn’t get enough. He devoured his petite, pristine portion, only to ask this friend and that friend and that guy over there, “Hey, you finished?”

When he tried to say the name, he “butchered the hell out of it,” only to be corrected by a peer. “It’s crème brûlée!” she cooed. But he didn’t care: “This is the best pudding I’ve ever had in my life.”

Almost 14 years later, he’s still laughing about that lunch. Today, he wears a T-shirt that reads, “It’s Pronounced Pee-can,” and sits at the far end of the bar at Willow’s Bistro in Winston-Salem, where he’s the executive chef. The restaurant hired Myers last year to reinvigorate the seven-year-old operation.

It is just past noon and the open kitchen flutters before him. Romaine on the grill, waiting for horseradish Caesar dressing and charred crostini. Pimento cheeseburgers, on their way toward salty, thick-cut sweet potato fries. Cooks flying over again and again, to ask Myers a question, double-check a task. “Do we have panko, Chef?” “Which olives should we roast?”

Willow’s menu has blossomed under Myers, who loves stirring innovation into familiarity.

When he enrolled at the CIA, Myers was the one with all the questions. He spoke cooking fluently — just a different dialect from his French-focused textbooks. Born and raised in Davidson County, Myers cherished Southern culinary traditions and flavors. When he married his wife, his grandmother MeMe put together a cookbook of her family-famous recipes for him — chicken and dumplings, sugar-coated peanuts, cold oven pound cake, and black walnut cake, made with nuts foraged from the backyard.

“Everyone made fun of me because I didn’t know what béchamel was. But I knew,” he says. “It’s just milk gravy. And I made it better than anyone.”

French fundamentals often correlate with Southern comfort. Crème brûlée, for instance, is just vanilla custard, fancied up with a sugary beret — the overseas cousin to American pudding, which, thanks to MeMe, Myers knew well.

During that first year, Myers and his friends at school held a potluck, to share recipes and show off skills. He made banana pudding for all the Yankees. Of course, they couldn’t get enough, especially the one who’d corrected his pronunciation of crème brûlée.

“What is banana pudding?!” she exclaimed as she devoured the dish, bejeweled with wafers, crowned with soft cream. Instead of correcting her — it’s ’nana puddin’ — Myers just smiled: “Exactly,” he said.

Willow’s Bistro lives in a former railway freight warehouse, built in 1913. The building’s history seeps into the restaurant’s soul: lofty ceilings, raw brick walls, a porch-like patio where guests can drink and dine, soaked in sunlight. The walls are burnt orange, adorned with for-sale paintings from a different local artist each month. Daily features and locally supported farms and vendors are scribbled on mammoth chalkboards. And the kitchen is in the center of it all — exposed and abuzz, like a beehive. 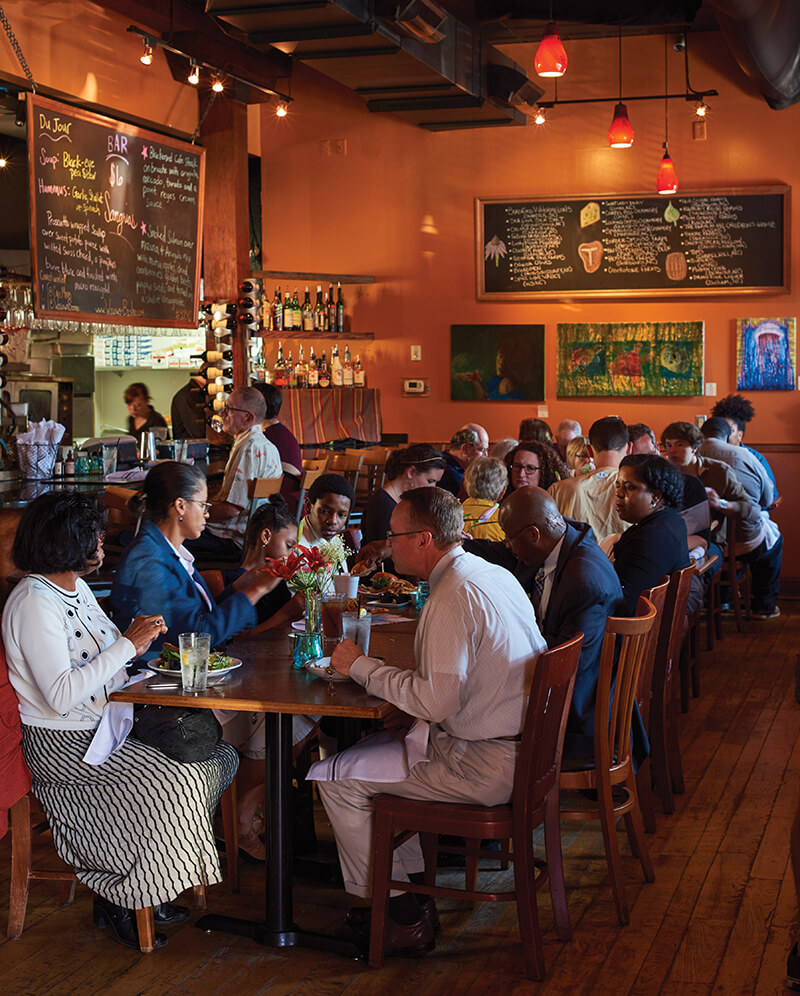 Willow’s Bistro is a local favorite for lunch and dinner, Monday through Saturday, plus brunch on Sundays. photograph by Dhanraj Emanuel

Dubbed after his culinary school nickname, Willow’s always felt personal for Kingery — but as his ventures expanded, his time shrank. He needed someone who could not only take charge, but also take care of the restaurant, every day, like he used to.

Enter Myers. After culinary school, he headed home to the South, and made a name for himself at River Birch Lodge in Winston-Salem, where he ran the kitchen for 10 years. When Kingery approached him with the opportunity to take the lead at Willow’s, he leapt: “This has always been one of the best restaurants in town,” Myers says. “I know what Will’s vision is, and I’m here to maintain that.”

To Myers, the vision is simply ardor — about, well, everything.

“I hire people who can learn,” he says, “and who care.” About where ingredients come from and for whom they are cooked. About the neighbor who calls the kitchen to stop by and borrow a cup of panko. About the charity event the next day, when employees will work on their days off.

Myers’s passion seems not just to echo Kingery’s, but to spread, like wildfire, among his staff. When he left River Birch Lodge, a couple of his protégées even followed.

Sous Chef Brent Andruzzi is one. As Myers portions short ribs, Andruzzi dashes between lunch service and sheet pans of plump, roasted olives, which will soon be doused with rosé vinegar. When asked why he stuck with Myers, he glances between cilantro microgreens and his mentor, then says, “Freedom,” before rushing back to the stove.

Willow’s menu has blossomed under Myers, who loves stirring innovation into familiarity. The community, it seems, can’t get enough. Since Myers started, business has almost doubled. And you only need to scan the menu to start to understand why.

Salt-and-vinegar pork rinds. Bradford watermelon red molasses fries with cheese from Goat Lady Dairy. Crawfish and grits with roasted tomatoes, andouille sausage, and tasso ham. Cocktails infused for months in a barrel from Top of the Hill in Chapel Hill. And bourbon crème brûlée. Like his pronunciation, Myers’s recipe has a deep, proud Southern accent. It sounds good here.