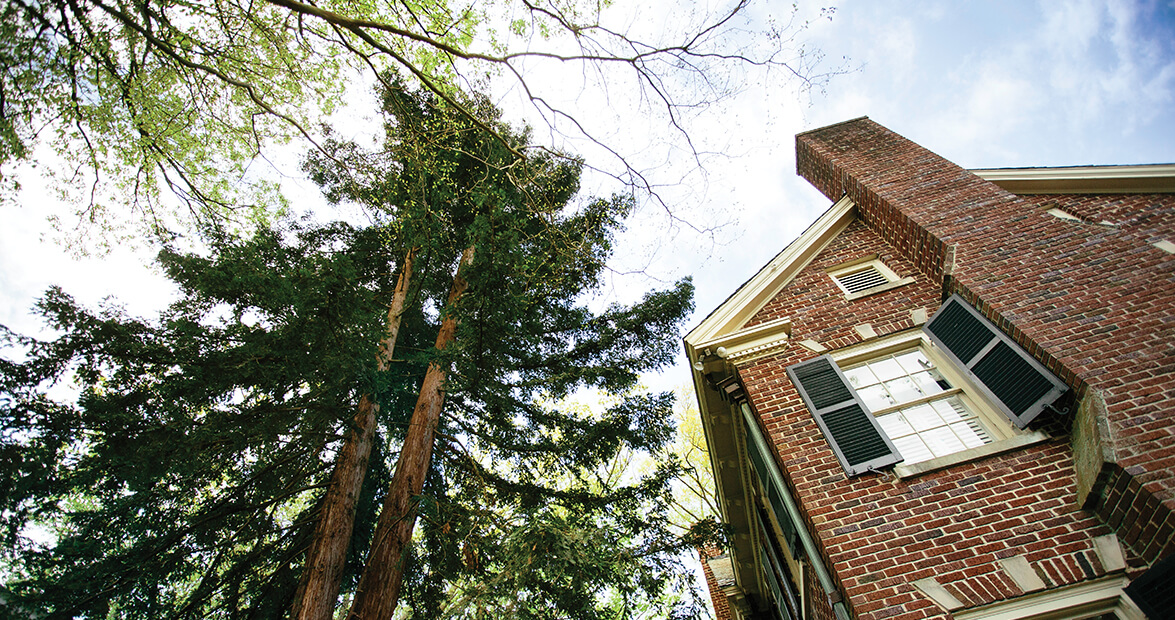 Bob Mazur’s mind drifted back to a winding road that ran down from the green mountains of Oregon to the damp shores of Northern California.

He listened as the Pacific Ocean lapped against the sand, and water droplets fell to Earth from the dense mass of a pea-soup fog overhead.

And then he remembered he was standing in eastern North Carolina. In Wilson.

Mazur, whose 40-year career as a forester began in the Pacific Northwest, had been let in on one of the best-kept secrets in eastern North Carolina: Scattered in private yards and standing tall among Wilson’s indigenous oaks and magnolias are a handful of genuine California coastal redwood trees.

While an uninitiated visitor might need help finding them, there’s no mistaking the redwoods’ soft, fibrous, reddish bark nor their storied height and girth. There’s also no mistaking the usual reaction when eyes are first laid on them.

“A lot of people do look and say, ‘Oh my God, that’s a redwood!’” says Betty Lou Walston, whose property on Nash Street includes the 88-year-old brick home she shares with her husband, Henry; an elaborate backyard garden; and a strikingly foreign redwood that sits a few feet from an upstairs guest room. “You see what you expect to see, and they’re not expecting to see it,” she says.

About 20 years ago, when a client showed him his first Wilson redwood over on the corner of Raleigh Road Parkway and Sunset Crescent, the sight so jarred Mazur that his mind raced back to the days when he drove from Oregon to California just to stand in thick forests of the majestic trees.

“When I looked at it, all those visions came back again,” says Mazur, who has worked as an independent forestry consultant in the area since 1979.

“I don’t know how to explain it,” he says. “It’s magical, it’s cathedral-like, it’s awe-inspiring. You feel like you’ve been to church.”

The logical question is this: How is it that a scientist can relive such an ethereal experience so many years later on the other side of the country? The answer has to do with a cotton magnate and his appreciation for exotic plants.

Willie T. Lamm, who founded the W.T. Lamm Cotton Company in 1919, was known throughout Wilson for the garden he kept at his home at 410 Raleigh Road Parkway. Folks came from miles around each spring to see his colorful camellias and other plants.

In 1942, for reasons unknown to his remaining descendants (they suspect it came on the heels of a search for camellias), Lamm dispatched a cotton truck to a nursery in Norfolk, Virginia, to bring back three six-foot-tall redwood trees. Two were planted among the flowers in Lamm’s yard and one went to the home of his business partner, S.A. Glover, in Gardners township, a few miles outside of town.

When James Lamm, Willie’s son, built a home next door to his father’s in 1955, he sent to Norfolk for a redwood seedling to plant in his yard. Years later, that seedling became the tree that inspired Mazur.

Since the redwoods were fairly easy to root, the Lamm family shared seedlings with relatives and neighbors around town. Gretchen Cozart, who at age 95 still lives in her Ionic-columned white house on Nash Street, tried to root several trees, including the one that grows in Walston’s yard next door.

In all, there are about 10 California coastal redwoods around Wilson that were planted more than a half-century ago. Younger, much smaller trees exist in other yards as their owners attempt to nurture them toward adolescence.

The tallest of the trees is believed to be behind Willie Lamm’s former home, where attorney Woody Harrison Jr., one of Willie’s grandchildren, and his wife, Nancy, live. That tree was recently measured to be 100 feet tall, and it has potential centuries of growing to do.

Despite their novelty, the trees aren’t famous. Most people in Wilson, Harrison believes, are unaware of their existence.

Asked whether their role in bringing the redwoods to Wilson is a source of pride among his family members, Harrison, 70, chuckles.

“I don’t think many people in the family even knew about it, to tell you the truth,” Harrison says.

A good use for humidity

California coastal redwoods, or Sequoia sempervirens, grow naturally in a relatively small band in the Pacific Northwest, ranging from southern Oregon to Northern California. The world’s largest trees, they grow more than 300 feet tall and more than 20 feet in circumference, according to the U.S. Forest Service.

In eastern North Carolina, where the winters are sufficiently rainy, the region’s summertime humidity provides enough moisture for the redwoods to survive, Mazur says. The Wilson trees’ owners don’t provide any special care for the older redwoods; one owner he met, at the old Glover home in Gardners township, didn’t even know there was a redwood on his property.

There is a distinction between redwoods and what are commonly referred to as Sequoia trees, Mazur says. Sequoias, or inland redwoods, grow at the top of the Sierra Nevada mountains, a couple of hundred miles inland from where the coastal trees are found, and would likely not survive in North Carolina.

A spokesman for the Redwood National and State Parks in California said it’s not uncommon for seedlings of both varieties to be planted in yards around the country with conducive climates. Coastal redwood grow kits, for example, are available online for as little as $7.99.

But the redwoods are not common in eastern North Carolina, where their own considerable height could pose the biggest threat to them.

A life span of up to 2,200 years makes the 71-year-old trees virtual infants. In 50 or 100 years, Mazur says, the trees would, theoretically, dwarf the oaks and magnolias that keep them company, making them de facto lightning rods.

“That’s undoubtedly going to be the limiting factor,” Mazur says. “It’s not going to be disease or insects or anything like that. It’s going to be lightning.”

So for now Mazur, Willie Lamm’s descendants, and visitors will have to enjoy the redwoods while they last. And their owners can keep enjoying the looks of awe on a first-time viewer.