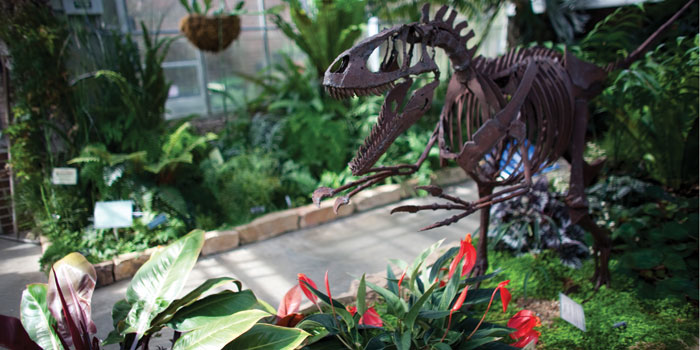 Dr. Larry Mellichamp picks up a small, green plant with a tiny speck of color on it. “This is one of our smallest orchids,” he says in a proud voice. “It’s the size of the head of a pin.”

A few minutes later, the 63-year-old walks over to a tray of average-looking plants. “This is one of our most popular plants,” he says. “If you touch the leaves, it will contract.”

Just like magic, the leaves of a sensitive mimosa respond to Mellichamp’s touch and fold inward. Nobody, including Mellichamp, knows why the plant withdraws, but he guesses it’s to avoid being eaten.

As a professor of botany and the director of the Botanical Gardens at the University of North Carolina at Charlotte, Mellichamp could give a much more articulate hypothesis about the sensitive mimosa’s behavior, but unlike some academics, Mellichamp has a down-to-earth, accessible demeanor when it comes to his specialty.

The Charlotte native might have been born to love plants — his grandmother was a florist, and a long-ago ancestor was an amateur botanist. “Some of that rubbed off not overtly, but by osmosis,” says the professor, wearing a light blue chambray shirt and a plaid tie with sorbet colors as he sits in a classroom.

His love of plants permeates most, if not all, facets of his life; Mellichamp decides where to travel based on what plants he’ll see.

While everyone can’t fill their passports with plant destinations, they can visit the McMillan Greenhouse at UNC-Charlotte. It isn’t a place filled with daylilies, iris, and roses. Instead, it’s a 5,000-square-foot collection of exotic plants from around the world. And it’s a place Mellichamp has spent his career cultivating.

Majoring in biology, Mellichamp graduated from UNC-Charlotte in 1970. As a student, he worked in the campus gardens with his mentor, Dr. Herbert Hechenbleikner, and managed the university’s 10-by-14-foot hobbyist greenhouse. After graduation, Mellichamp went to the University of Michigan, where he earned his doctorate degree in botany.

While studying at Michigan, he spent a lot of time at the university’s Botanical Gardens because he wanted to learn more about horticulture. He was different than his colleagues in the plant world because he hung out with botanists and horticulturalists. Fellow botany students, who spent their days studying plants in theory, thought he was wasting his time with horticulturalists, who were focused on actually growing plants. Mellichamp didn’t care. He wanted to learn from both camps, and it paid off when he got a teaching job at his alma mater in 1976.

UNC-Charlotte wanted someone with a degree in botany and an interest in horticulture. The university also needed someone to take over its gardens when Dr. Hechenbleikner retired.

To Mellichamp, it was the perfect job.

As a young professor, Mellichamp couldn’t obtain money for botanical research, so he turned his attention to the gardens, where donations were available. “I didn’t have a firm concept here when I first came,” he says. “It all evolved.”

Four years before Mellichamp joined the staff, the university built a 30-by-60-foot fiberglass greenhouse to accommodate Tom and Dorothy Shoenith McMillan’s orchid collection, which they donated to the school. By the early 1980s, Mellichamp saw the need to further expand the greenhouse. With the help of Bonnie Cone, founder of UNC-Charlotte, he asked the McMillans to fund the expansion, and they agreed. The current greenhouse, named to honor its benefactors, opened in 1983.

The McMillans’ orchids remain the focus of the greenhouse’s first three rooms. From old-fashioned corsage orchids, such as the ‘Cattleya,’ to modern varieties, such as the lime green ‘frilly Cattleya,’ the collection offers all kinds.

The purpose of the McMillan Greenhouse is to show people plants that they can’t easily see anywhere else. Mellichamp compares it to an art museum, where visitors see things beyond their everyday surroundings.

As part of the College of Liberal Arts and Sciences, the greenhouse carries out the college’s teaching and outreach mission. It has eight rooms, complete with eight climates to accommodate thousands of plants that otherwise wouldn’t be able to grow in North Carolina. Mellichamp and Paula Gross, a lecturer and the assistant director of the Botanical Gardens, along with four gardeners and two part-time employees, maintain the greenhouse and campus gardens. Someone has to check on the plants every day — even on Christmas.

“It’s like running a store,” Mellichamp says. “Somebody’s got to come in and turn on the griddle and mix up some pancake batter and put the coffeepot on.”

“Many of the individual plants are long-lived,” says Gross, who’s worked at the gardens since 1997. “The plants themselves, if taken care of, will live beyond his tenure here.” She sees Mellichamp’s collection choices as a guide for future gardeners and a continuation of his legacy.

Take the greenhouse’s extensive collection of pitcher plants, for example. Mellichamp is one of the top pitcher-plant experts in the world. As a result, the McMillan Greenhouse is famous for growing the carnivorous plants.

In 1875, Mellichamp’s ancestor Dr. Joseph H. Mellichamp, an amateur botanist, published the first proof that pitcher plants digest insects. But Mellichamp says his interest has nothing to do with lineage. Instead, he traces it back to 1969 when, as a young student, he went to the coast with Dr. Hechenbleikner. After an unsuccessful day looking for Venus flytraps and pitcher plants, Mellichamp discovered one in the ditch on his walk back to the car.

“A lightbulb went off, I guess, in my brain,” Mellichamp says. “They’re inherently interesting. They’re plants that catch insects. … I started reading about them. I grew some here, killed them. You’ve always got to kill things. Good thing I don’t work in a zoo because you’ve got to kill everything one time before you learn how to grow it.”

Mellichamp eventually figured it out — three bog gardens of pitcher plants now fill the greenhouse courtyard. He grows them for himself and for the 25,000 annual visitors. Through the years, Mellichamp says, people from every state and at least 20 foreign countries have come through the gardens.

In Mellichamp’s 35 years at UNC-Charlotte, he’s only thought about leaving once. It wasn’t because he was unhappy. He thought moving on was the inevitable next step.

“Other colleagues here had moved on; faculty had come and gone over the years,” he says. “I thought you were supposed to kind of work your way up the hierarchy. That does happen in horticulture.”

When Mellichamp asked his staff mentor about moving on, he told Mellichamp not to go through the motions of applying for a new position if he wasn’t interested in pursuing it.

“That was the advice that I needed because I really didn’t want to leave,” Mellichamp says. “I like the gardens here. … I was from this area. I knew the people here. I didn’t have high ambitions. I didn’t want to go move to some exotic place. I wanted to make this work better.”

Mellichamp has something worth having right here in Charlotte. As much as he enjoys what he does, Mellichamp knows that one day he’ll move on to retirement, just like his mentor, Dr. Hechenbleikner.

But for now, he’s happy to keep his legacy going. And he’s more than happy to keep sharing the magic, even if he can’t quite explain why the sensitive mimosa withdraws from his touch. 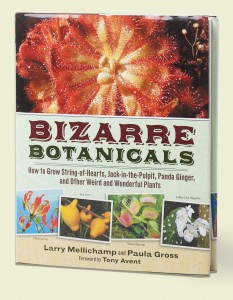 Just because a plant is natural, doesn’t mean it’s ordinary. Larry Mellichamp and Paula Gross put together a collection of more than 75 “bizarre botanicals” that occur naturally but have extraordinary characteristics. Take the ‘western Australian’ pitcher plant for example; if you stick your finger into the pitcher, the plant’s fangs will grip on, similar to a Chinese finger trap. Each plant in the book is “reasonably available for purchase” and “reasonably growable,” which means you can add these weird plants to your home collection. The authors provide growing tips for every entry. Bright, full-page photos add to the fascination as readers discover nature’s most mysterious plants.

Lori K. Tate is a freelance writer who lives in Cornelius with her husband, John, and their 1-year-old twins, Graydon and Margot. Lori’s most recent story for Our State was “South 21” (June 2011).