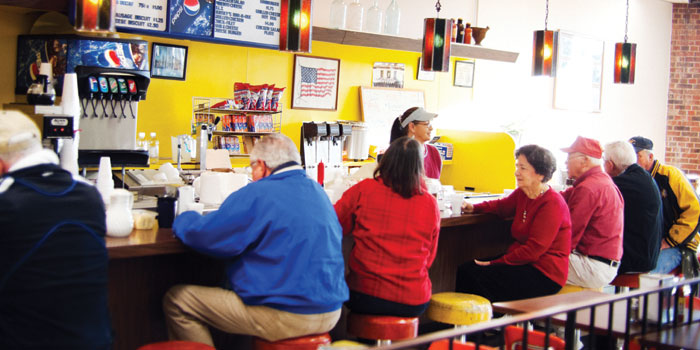 Editor’s Note: This story was originally published in March 2012.

The odor of white bread crisping between the hot surface of a sandwich press clings to the clothes of every person stopping in at Yanceyville Drug Company. Take a seat, and in two minutes, it’ll be right under your nose as a finger-lickin’ bacon, egg, and cheese sandwich.

Like most old soda fountains in North Carolina, the one at Yanceyville Drug — or “the drug store” — as locals call it, hasn’t changed much since it opened in 1922. Shelves high on the yellow wall still hold a collection of antique glass bottles, and Bunn-O-Matic coffee pots sit warming the morning’s brew.

A black-and-white photo of a young man in a white coat sits on the prescription counter at the back of the store. That’s Tommy Davis. He’s owned the store since 1968, and although his hair is whiter today, he still casts a wide and bright smile at customers.

Davis came to Yanceyville from the University of North Carolina at Chapel Hill’s School of Pharmacy and brought one important philosophy with him: A good drugstore needs a soda fountain.

At 8:30 a.m. on a Friday, the fountain is busy with regulars. Judy Douglas pushes sizzling plates across the counter to men with calloused elbows. The men adjust their hearing aids and show a few silver teeth through every laugh. They grip the bills of their faded baseball caps. Caswell Fire. Carolina Farm Credit. Farm Bureau. USAF-Retired. USMC. USA. The names on the hats declare their right to linger, nodding to the long hours and honest work that brought them to this table.

Once the breakfast crowd thins and the sports page lies rumpled on the table, Douglas gives her counter buddy, Pam Edwards, a hug. This Yanceyville duo keeps careful watch over this fountain. “There’s too much fuzz in this Dr. Pepper,” Edwards says, gesturing at the humming soda machine.

Their laugh lines betray the fun they have with their jobs and each other. The two glance through a catalog of kitchenware. They need a new spatula to replace the one that just cracked. Hard work will do that to your tools.

In a small corner office, Tracy Chandler holds up a yellowed scrap of paper with two words in old typewriter print: Tracy Campbell. “That’s my maiden name,” she says. “I remember the day I typed this.” It was 1975, and she was a bright-eyed, 15-year-old girl who waited on customers after school. That paper, which she recently found slipped between the prescription counter and the wall, connects her start as a Bartlett Yancey High School student to her current position at Yanceyville Drug as Davis’s business partner. She looks at the words and smiles. “It feels like I’ve come full circle.”

Davis plans to give Chandler the store when he retires. Like Davis, she’ll run it with black coffee and the daily sports pages. And she’ll let customers run up a tab when times are hard and deliver their prescriptions if they can’t pick them up.

Wearing a black dress and pearls, she’s heading out to attend the funeral of a long-time customer. But first, she studies the greeting-card collection to send a client congratulations on a new baby.

Chandler, Davis, and the rest of the staff often come to the front to catch up with customers over iced tea and a homemade pimento cheese sandwich. They all sit on tape-repaired, rust-colored bar stools and suck the sweet pickle juice off of their thumbs. They leave no trace but little rings of brown liquid in the bottoms of plastic foam cups.

Sometimes, there’s a surprise on the menu. Like chicken and dumplings on chosen Wednesdays. But most days, people just want the classics: grilled cheese sandwiches, chicken salad plates, cheeseburgers, barbecue with homemade slaw.

Every day, Monday through Friday, as the morning sun pours in through the front windows and glints off the tabletops, and the coffee crowd sits adjusting their baseball caps and flashing their silver teeth, somebody at “the drug store” puts fresh aluminum foil on that flat-press grill. Timeless, homemade food — with the baseball news in the morning — keeps people going. If you put your nose in your shirtsleeve as you walk out, you’ll remember it all day long.

Hannah Mitchell is a freelance writer from Mebane.