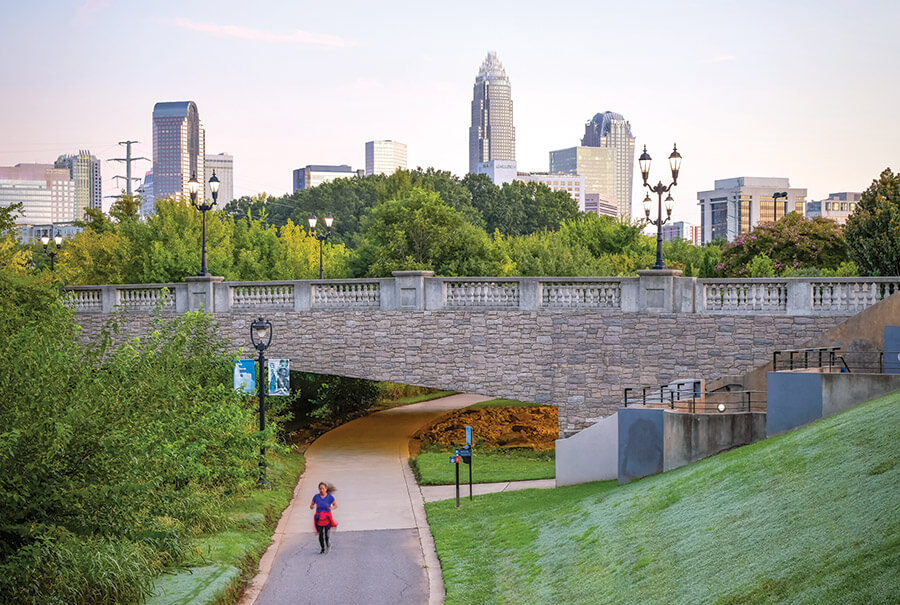 Three Paved Greenways in the Piedmont 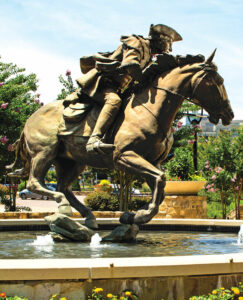 Against a backdrop of the Charlotte skyline, a bronze horse gallops at full speed, carrying a rider in a tricorn hat. The statue, by local artist Chas Fagan, commemorates the journey of Capt. James Jack, who carried the Mecklenburg Resolves and, some believe, an early declaration of independence to the Second Continental Congress in 1775. It’s a focal point on the Little Sugar Creek Greenway, a paved trail that runs along its namesake creek in the Queen City. The trail links urban attractions like the 1950s Park Road Shopping Center and the restaurants on Montford Drive with natural areas like the wetlands of Marsh Park in Pineville. Along the way, the creek itself provides habitat to otters, herons, and other wildlife. The greenway is an ongoing project that, when complete, will span more than 19 miles from North Tryon Street to the South Carolina state line — a natural escape cutting right through the heart of our state’s largest city. — Rebecca Woltz

For maps and more information about completed sections of the greenway, click here.

Plan Your Next Adventure 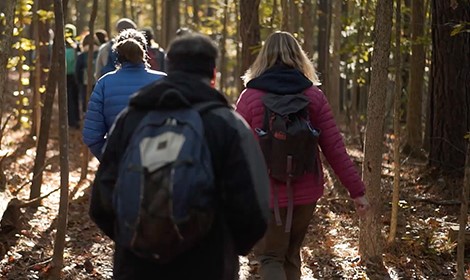 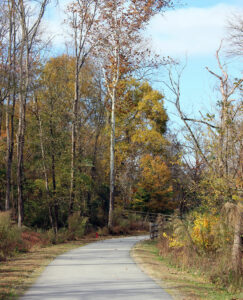 photograph by PamSchodt/iStock/Getty Images Plus

The Neuse River provides a peaceful soundtrack for a walk or a bike through extensive wetlands, along boardwalks, across seven bridges (two of which are suspension bridges), and past historic sites on this 27.5-mile trail — the longest greenway in the state. A segment of the 1,175-mile-long Mountains-to-Sea Trail, the Neuse River Greenway extends from Falls Lake to the Wake/Johnston County line. With plenty of parking areas along the route — plus canoe launches and opportunities for kayaking and fishing — the 10-foot-wide, paved, mostly flat trail is easily accessible no matter how active you are. Pssst, to access the more secluded areas of the trail, start at Anderson Point Park in Raleigh. — Katie Schanze 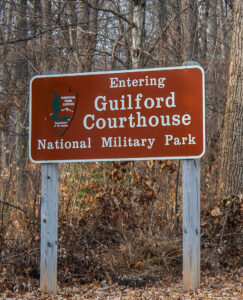 Take a ride or a stroll along the Atlantic & Yadkin Greenway — a 7.5-mile paved rail trail that runs from Lake Brandt to Country Park, linking natural and urban areas along the way —and you’ll come face to face with the past: As it approaches its southern terminus, the trail passes through Guilford Courthouse National Military Park, which played a pivotal role in the American Revolution. On March 15, 1781, a 1,900-man British force defeated Maj. Gen. Nathanael Greene’s 4,500 Americans and Continentals at the Battle of Guilford Court House, but because the British suffered so many casualties, the U.S. eventually won the Revolutionary War. Now, in the midst of modern-day Greensboro, the site offers a respite into nature and a reminder of our state’s — and country’s — history. For a closer look, take a detour from the greenway to weave through grassy fields and old-growth woods, past monuments and battlefield sites on the park’s unpaved interior trails, and keep an eye out for the graves of two of North Carolina’s three signers of the Declaration of Independence, William Hooper and John Penn. For a peaceful, solemn walk, go early in the morning; you’ll feel transported to another time. — Katie Schanze