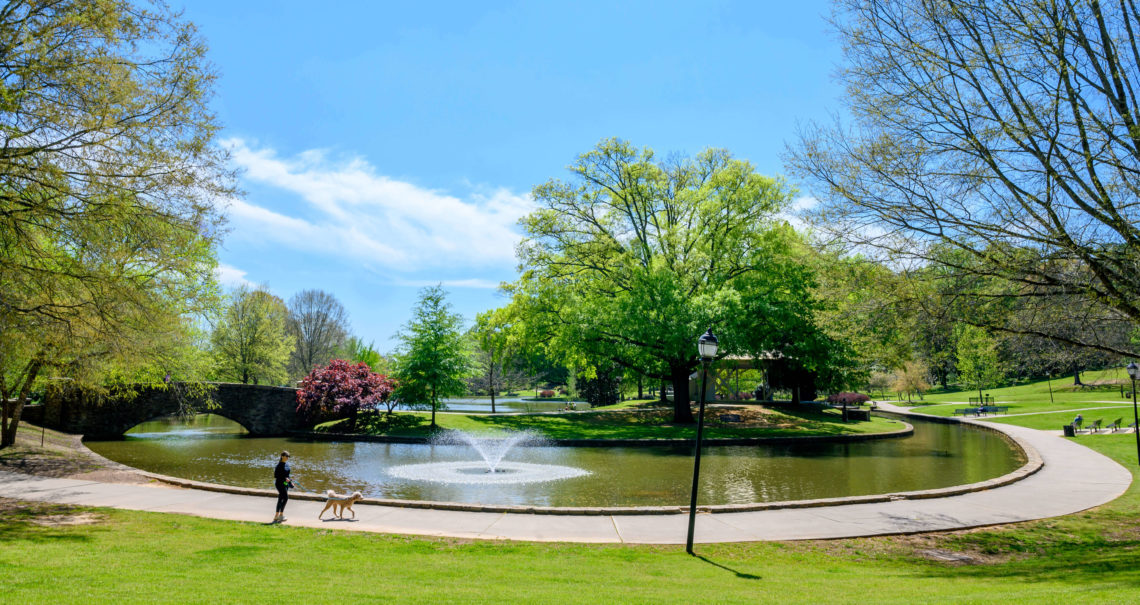 EDITOR’S NOTE: For some destinations, hours of operation may vary, so please check ahead.

For Sarah Crosland, the best kind of Saturday is a Saturday with no plans. That means the day is hers — and she can explore with no start or end time. “Sometimes Charlotte’s parks feel like little secrets,” she says. “You don’t know how wonderful they are until you get out and explore them.”

From her Charlotte home base, Crosland is in luck. Stretching more than 540 square miles, Mecklenburg County has a rich geography that offers everything from lakeside parks and beaches to nature preserves and mountain-like settings. Read on to discover six of Charlotte’s most sought-after parks and green spaces.

Park it in the city

From the heart of Uptown, Romare Bearden Park “brings a bit of charm to a busy area of the city,” says Crosland, who lives in the nearby Plaza Midwood neighborhood. “There always seems to be something going on, like fitness classes or live music. But it’s also just a great spot for a sunny midday lunch by the fountains or unwinding with friends after work.” 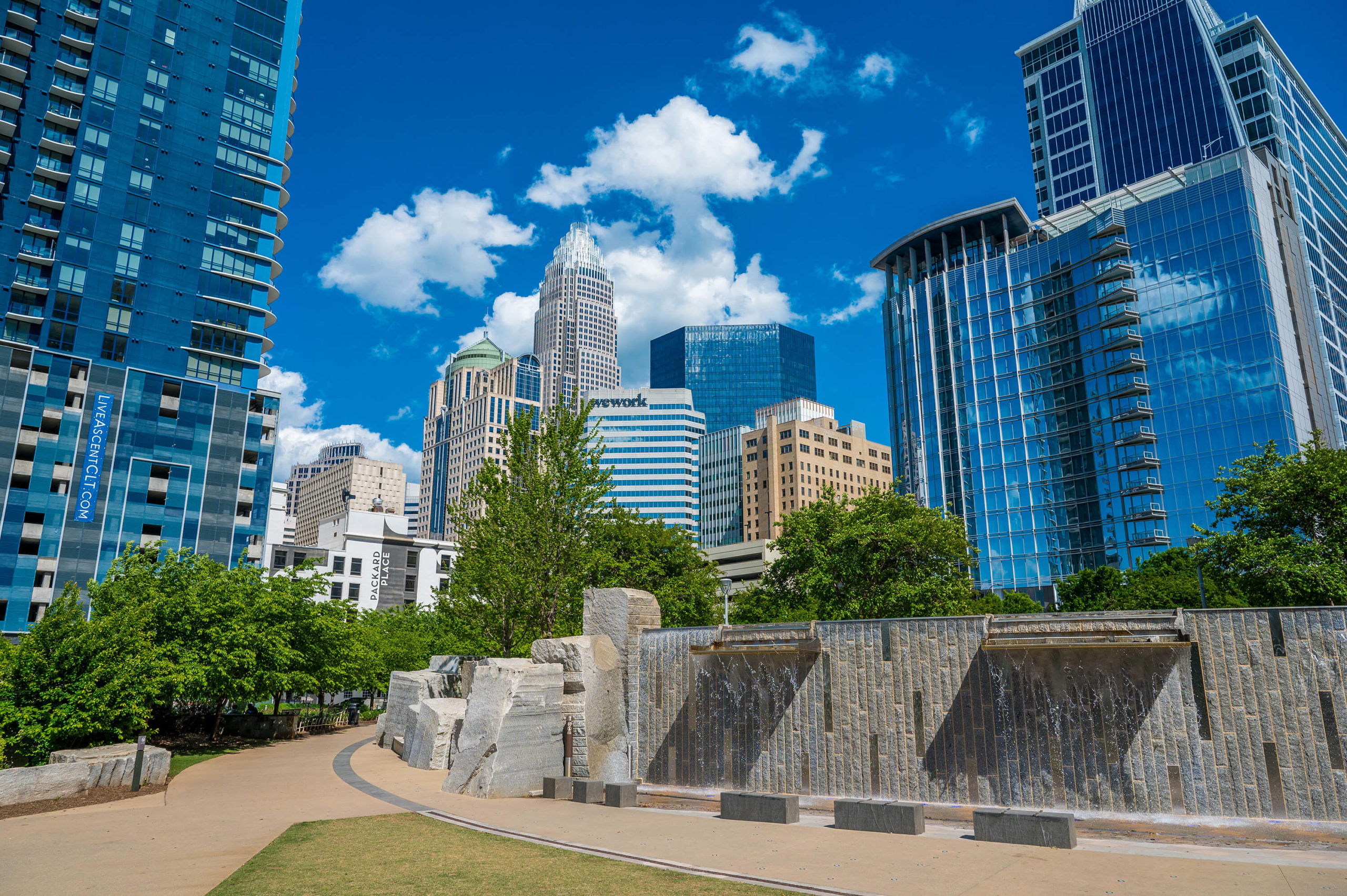 The park’s proximity to — and amazing view of — Truist Field, home of the Triple-A baseball team the Charlotte Knights, makes it the ideal spot for pitching a blanket and picnicking. Throw down a lawn chair and watch the sky glow from the stadium lights, or enjoy one of the live concerts during Party in the Park. An early evening stroll through the green is even better, as Charlotte’s skyline hovers over the park and lights up the sky.

When North Carolina makes its dramatic transition from summer to fall, head to McDowell Nature Preserve to see the landscape come alive with color. There’s no shortage of stunning vistas, with a canopy of vibrant fall leaves adding seasonal luster to the 1,132-acre park.

Year-round, novice hikers love the seven miles of trails along the banks of Lake Wylie, where peaceful water reflects a mirror image of blue skies and trees, and in spring, wildflowers line the path.

Of Mecklenburg County’s 210 parks, McDowell is the only one that offers camping. The park itself houses 56 sites, and an additional six are nestled on Copperhead Island — a small but beautiful 14-acre island on Lake Wylie that features fishing piers and boat ramps so you can see the preserve’s beauty by water.

Relax with your furry friend

One stroll through Freedom Park, and you’ll know exactly why this city park is one of the most popular for Charlotteans. With large, flat grassy areas just about everywhere you turn, Freedom Park is ideal for throwing out a picnic blanket, tossing a Frisbee with your dog, kicking a soccer ball, or taking up a game of tennis. 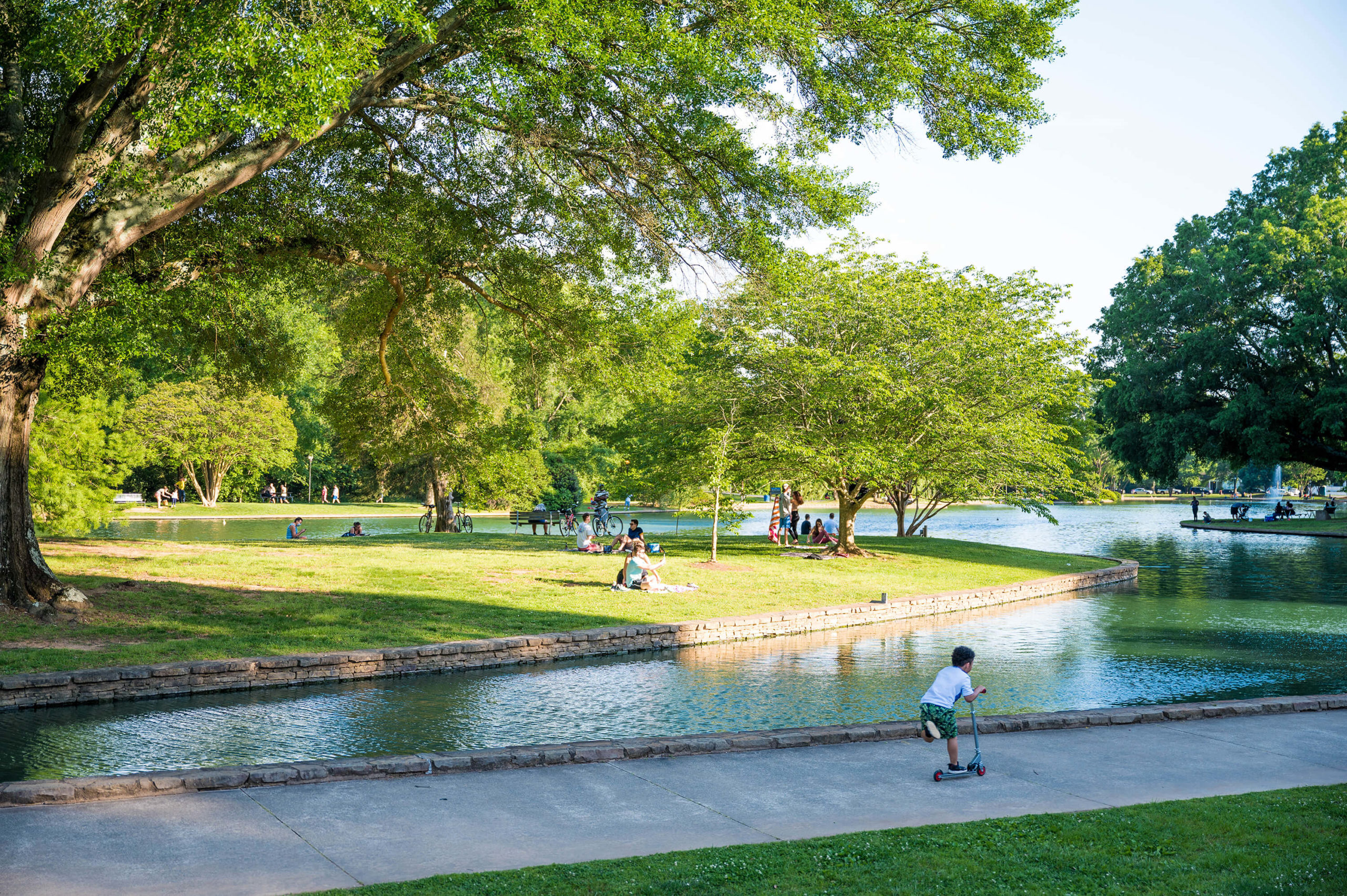 “I live within walking distance of Freedom Park — one of the best parks in the city, in my opinion — so I’m there several times a week,” says Michelle Boudin, who lives in the nearby Dilworth neighborhood. “It’s a great place to get in a walk, have a picnic, or just do some people-watching. And the dog-watching is even better!”

In addition to its seven-acre lake, 12 tennis courts, and two playgrounds, the park features a demonstration garden with a variety of pollinator magnets designed and planted by volunteer master gardeners.

There’s a reason south Charlotte residents (and those in nearby Union County) love visiting Colonel Francis Beatty Park: It satisfies everybody. “There’s a great shaded park for kids, walking and biking trails, a picturesque lake — what’s not to love?” says Union County resident Meredith Avila, who visits at least once a month with her preschooler and fourth grader.

Among the 245 acres is a large lake where fishermen and families take advantage of canoeing, kayaking, and, of course, fishing. Choose from walking trails that circle the water and wind through the wooded areas or bring your bike to explore the trails ranging from beginner to advanced.

Play a round of disc-golf

In Charlotte, plenty of parks and greenways get you close to nature. But to fully immerse yourself in the shade of lush greenery and wildlife, spend a day at Reedy Creek Nature Preserve. Here, the 927-acre preserve protects animals of all kinds, which means you’ll catch glimpses of the Southeast’s most prevalent animals, including the broad-winged hawk.

More than 10 miles of walking trails lead you to open fields, winding streams, and small lakes scattered throughout the park. On-site, you’ll find the Center for Biodiversity Studies and the Reedy Creek Nature Center, both of which provide several educational programs to learn more about the Southeast’s habitat.

“Reedy really has everything!” says Jodi Price, a mom of two who lives in nearby Mint Hill. “There’s a dog park, basketball courts, picnic shelters with fireplaces, multiple playgrounds, walking trails, the nature center, little free library, and a nature play area. We love it even in the summer months because all of the trails and playgrounds are shaded.”

Not to be missed: the park’s disc-golf course. Widely regarded as one of the best places in the country (and possibly the world) to play the sport, Reedy Creek’s course is set amongst the woods over hilly terrain, making it more challenging. As disc-golf’s popularity grows, Reedy hosts an estimated 8 to 12 million players who visit from around the globe.

Immerse yourself in Tar Heel history

A day at Latta Nature Preserve looks a whole lot different from one at the other Mecklenburg County parks. Home to the county’s largest nature preserve, Latta features the impressive Carolina Raptor Center, where visitors learn about some of the area’s fiercest airborne predators — like eagles and hawks, just two of the center’s 37 avian species.

Latta’s rich history is one of its biggest draws. At its circa-1800 living-history museum and farm, get a glimpse into early 19th-century life via tours of the plantation home, cooks kitchen, and other areas of the property. 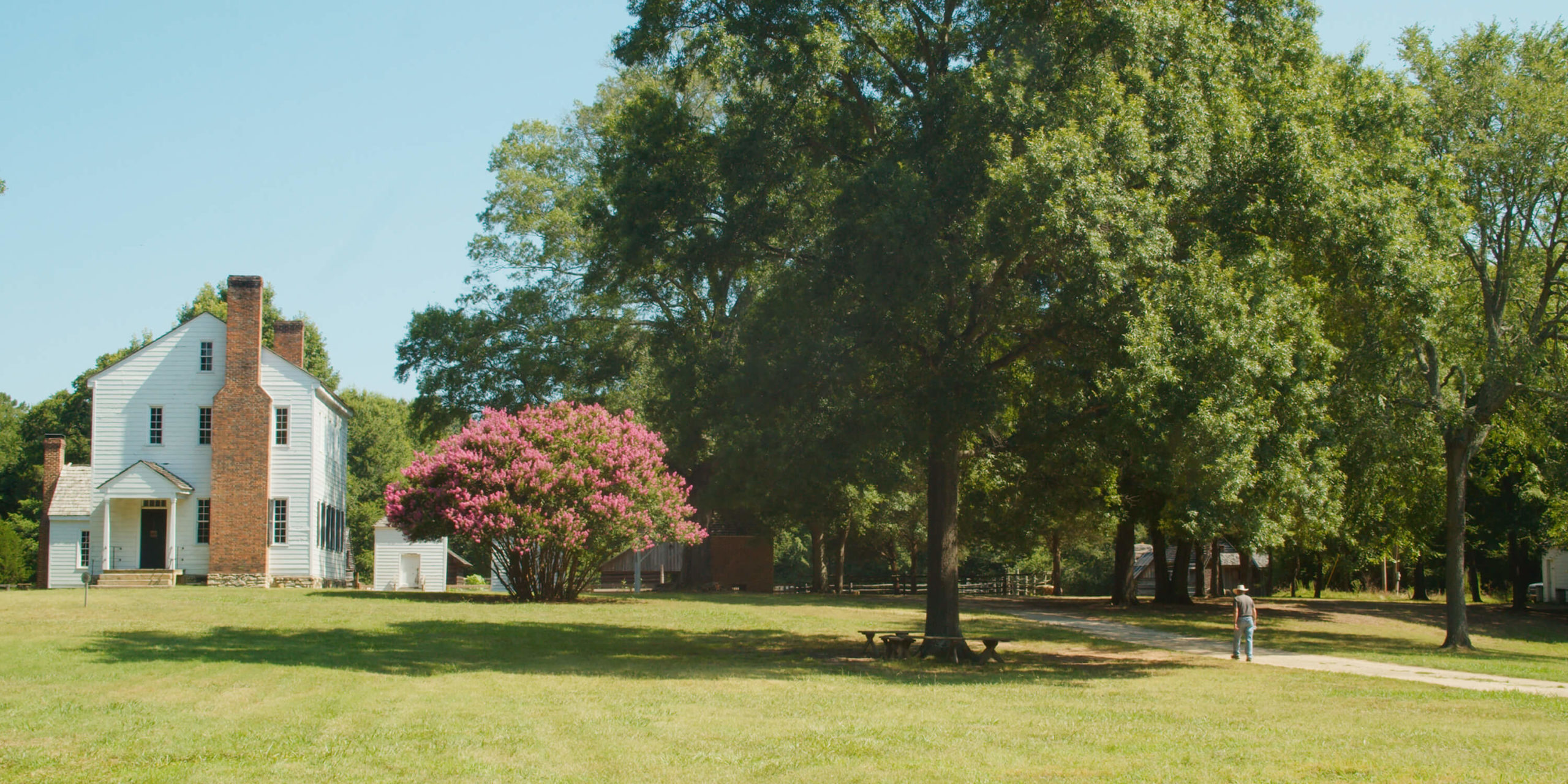 After your tour, save time to hike the preserve’s 16-mile trail system or launch a kayak on the shoreline of Mountain Island Lake.