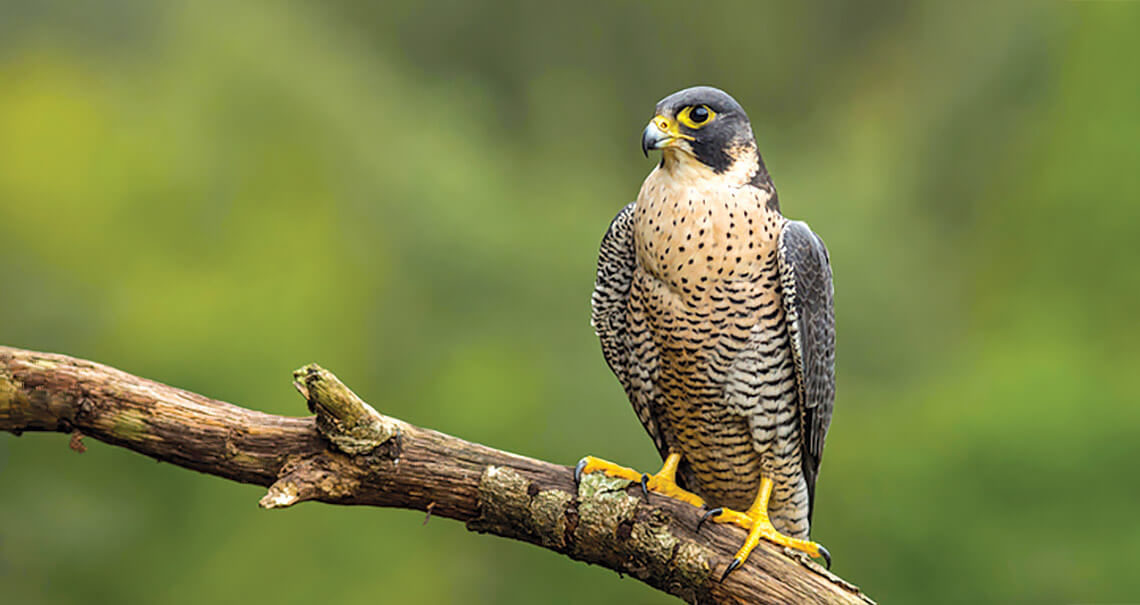 Find feathered friends in your region.

Visit the grand Flat Top Manor and Estate and explore the apple orchard, carriage roads, and two man-made lakes. If you’re lucky, you may spot a scarlet tanager, a member of the cardinal family distinguished by its jet black wings and red belly. Wheelchair accessible.

A trip to the highest point east of the Mississippi River means incredible views of fowl in flight. Embark on the six-mile Mount Mitchell Loop and keep your eyes on the horizon for the checkered wingspan and trademark sideburns of the peregrine falcon.

South Mountains’ 3,000-foot peaks, 80-foot-tall waterfall, and more than 40 miles of trails are a great spot for brave birders. The golden-crowned kinglet is known to frequent the rugged terrain and is unmistakable with its bold orange crown and yellow-streaked wings.

Stecoah Gap is one of the best places in the state to spot cerulean warblers: The males are known for their baby blue coats and thin necklace, and the females for their contrasting yellow bellies and pale eyebrows.

Did you see that dash of red whiz by you? You may have spotted a ruby-throated hummingbird while strolling the Outer Loop Trail, which runs right through a dedicated bird garden lined with bird feeders.

Spend a day walking along 14 miles of hiking trails surrounding Jordan Lake while you search for our nation’s most recognizable bird: the bald eagle. In warmer months, nearly 60 of these magnificent birds of prey make the lake their home.

Don’t forget to look up! And listen. The brown-headed nuthatch, a tiny songbird known for its rubber duck-like call, is often spotted in this wildlife refuge as it zigzags up and down trunks and branches, earning it the nickname “the upside-down bird.”

On the Pine Barrens Loop, a three-and-a-half-mile hike that weaves through hardwoods and pine forest, you may find yourself walking to a distinct soundtrack. Keep your ears open and listen for the endangered red-cockaded woodpecker hard at work on the longleaf pines.

Head out to the upper beach at Cape Hatteras with a packed lunch and watch the famed black skimmers find a bite to eat, too. Named for the dark feathers coating the backside of their wings and the tips of their beaks, these beach birds skim the water with their long bills in search of a fishy treat.

There’s plenty of natural beauty to see at this state park, but hardly anything as striking as a painted bunting. These small birds — which are members of the cardinal family — are easily identified by their bright blue heads, fire orange bellies, and cascading yellow, green, and purple backsides.

Walk down to the observation deck to see a breathtaking sunrise, and you might just catch a glimpse of the tundra swans. After a long winter, the birds head back north, but in early March, you can still spot the ones who are reluctant to leave.

This wildlife refuge has become a safe nesting and resting spot for greater snow geese and more than 350 other species since it was established in 1938. Explore the Salt Flats Wildlife Trail, which leads curious birders to an overlook with expansive views of North Pond. Wheelchair accessible.

For a printable checklist of these parks, click here.