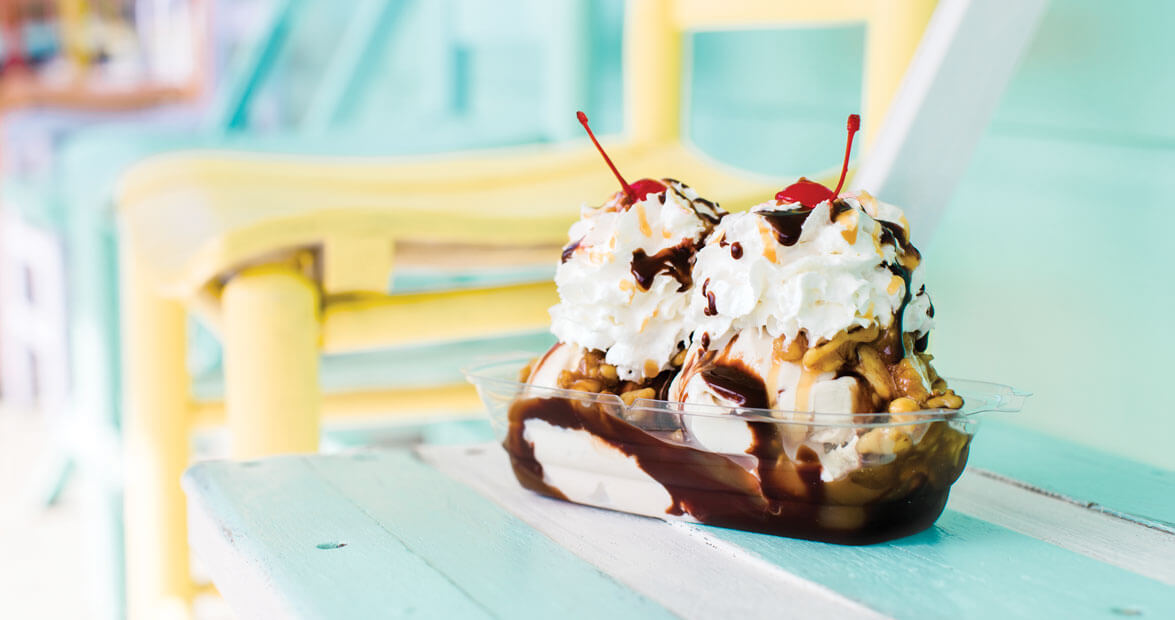 Sure, we can eat ice cream year-round. But nothing compares to the heady, delicious joy of a trip to an ice cream parlor to get a scoop (or three) on a hot summer day. The lines can be long, and sometimes we must wait outside in the muggy, buggy air, but that just gives us more time to read and reread the list of flavors. Anticipation builds. When our turn comes, we step up to the glass window, ready to feel the whooshing burst of frosty air on our hot faces when it slides open — the portal to sweet relief and just rewards. From the first taste off the top of a sweet scoop to the final crunch of a crisp cone, ice cream is pure delight.

Located within steps of Pisgah National Forest and within a few miles of dozens of storied sleepaway camps in the Brevard area, Dolly’s sits at the crossroads of many summertime comings and goings in the mountains. The shop is a well-known local landmark for hikers, campers, and cyclists headed into or out of Pisgah, and for many families as they launch and close camp week. A field trip to Dolly’s has been a special and spirited outing for generations of campers, who clamber aboard buses and bellow out songs the whole way there and back. Many beloved flavors are named for those summer camps (like Camp Highlander, aka coffee cookie fudge), providing another chance to proclaim our loyalties to our camp and affection for our favorite cone. Dolly’s stickers dot the back windows and bumpers of family cars and minivans across the state, the tastiest badge we earned all year. 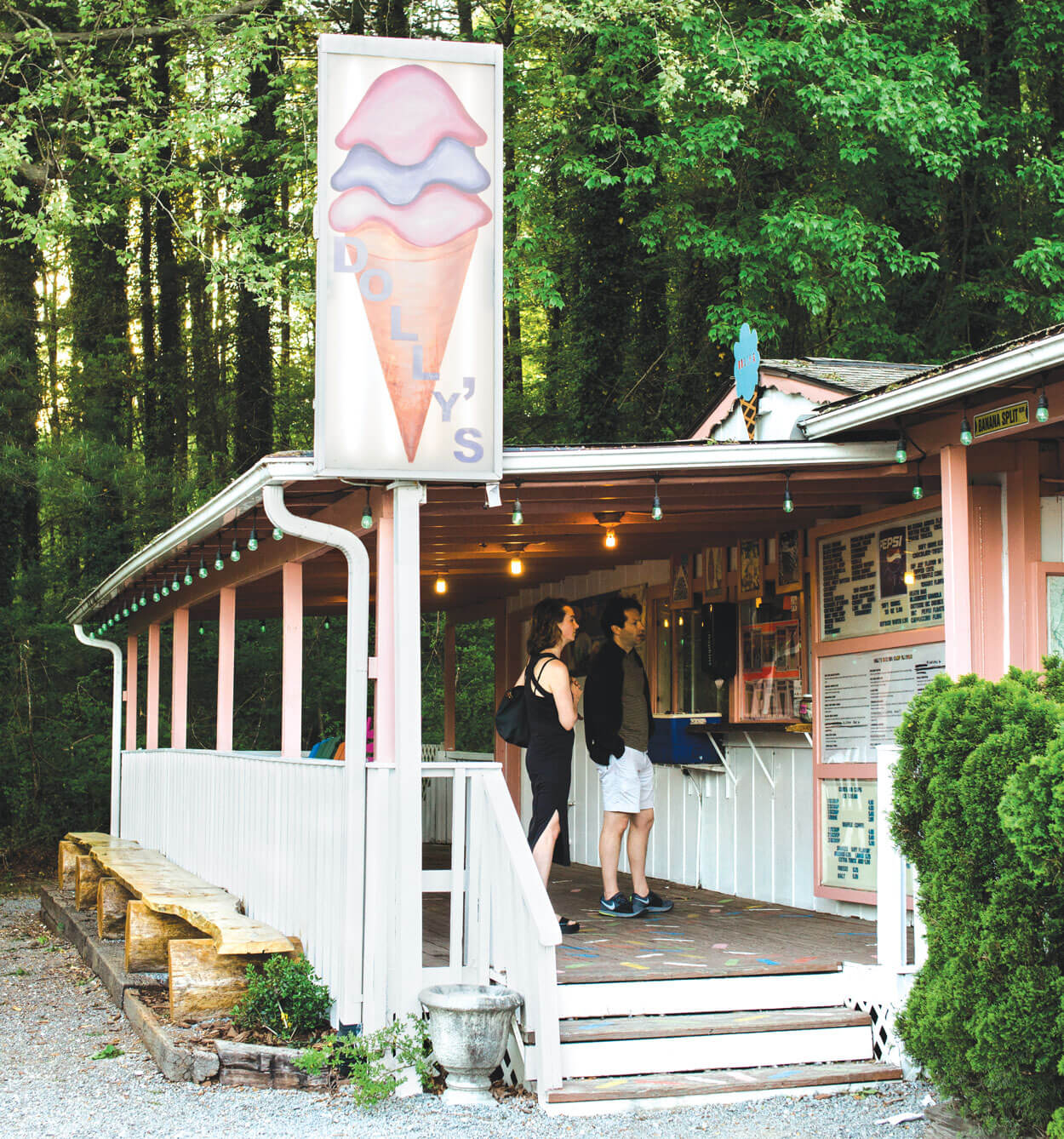 Many of us have gone out with friends to get some ice cream, but these three best friends — Marques Johnson, Jae Hatchett, and Rich Moyer — combined their skills to share their love of ice cream with us. It’s a tasty strategy to make new friends all the time. Since opening their first shop in Plaza Midwood in 2016, they’ve opened two more colorful and family-friendly locations in Charlotte’s South End neighborhood and in Mooresville. Johnson, who learned to make ice cream from his family in Florida, dreams up playful creations like Krazy Kake, Bartman, Wake Up Call, Dabba Doo, Papi Crunch, and Not Your Mama’s Pumpkin Pie. Check out their double-wide ice cream cones, designed to hold — you guessed it — two scoops.

On the Holden Beach Causeway — gateway to many a family beach trip — sits Beaches-N-Cream. Their nearly 200 flavors in regular rotation, plus another 30 seasonal favorites, are made with local ingredients from contented North Carolina cows. Two hundred flavors — including Beach Sand, made with honey and brown sugar, and Turtle Tracks — is a lot to choose from, but if a cone or a bowl just isn’t enough, try the “Bad Decision”: If challengers can eat 16 scoops of various flavors, plus toppings, in 40 minutes, their ice cream is on the house.

The Hop has been an Asheville icon since 1978. Current owners Greg and Ashley Garrison continue the tradition with three locations and flavors as artistic and creative as the city itself. Try blueberry kale or a vegan flavor, like strawberry pepita milk.

At the “Home of the Warm Waffle Cone,” the aroma of made-to-order vanilla, chocolate, and cinnamon cones greets you at the door.

Plenty of places make ice cream cakes. Boombalatti’s is famous for its towering ice cream pies. At the flagship location, choose any combination of the shop’s 24 flavors with fudge or caramel, all nestled in a homemade cookie-crumb crust.

Founder Scott Wilson loves to experiment with flavors — the Cold Sweat, made with hot peppers, has earned national publicity — and he has about 130 in rotation, from apple pie to White Russian. Fortunately, he’s happy to let you sample a few to find your heart’s desire(s).

Andia Xouris and her husband, George, both grew up in traditional Greek homes centered on food and family. Flavors like baklava and rose pistachio are inspired by Andia’s childhood on the island of Cyprus, and George’s family-heirloom ice cream scoop — inherited from his pappou — holds a place of honor in their shop.

The “ice cream” this shop is best known for is frozen yogurt. In the 1960s, when the building housed Jockey Ridge Restaurant, people stuck change in the ceiling to tip the servers. Owners Jesse and Whitney Hines — a professional surfer and an artist — kept that tradition and donate the money to a good cause: Surfing for Autism.

Before opening their North Raleigh shop (and a second one on Person Street), Jared and Kelsey Plummer served ice cream out of a turquoise-and-white camper and at Durham Bulls games, building a following with “forever flavors” like coffee bourbon and blackberry hibiscus. The name is a tribute to Jared’s granny’s farmhouse, where two black wooden roosters kept watch over family gatherings. Which included ice cream, of course.

Alex and Liz Hannah met growing up in Cary, graduated from Appalachian State University, and wound up opening a South End ice cream shop, plus a second location in South Park. Scratch-made flavors like fresh strawberry and salted Oreo are not only delicious, they also support the growth and prosperity of the Hannahs’ community: A portion of their monthly profits, which they call the Queen’s Share, goes to various local charities.

Finding the way to the rocker-lined front porch of Maple View Ice Cream is easy: Just follow the cyclists on surrounding country roads each weekend, zipping along in lines like ants to a picnic. This working dairy offers milk and other products, but it’s the sweet treats that draw most people for a big cone or a pint packed in Maple View’s signature Holstein-spotted cartons.