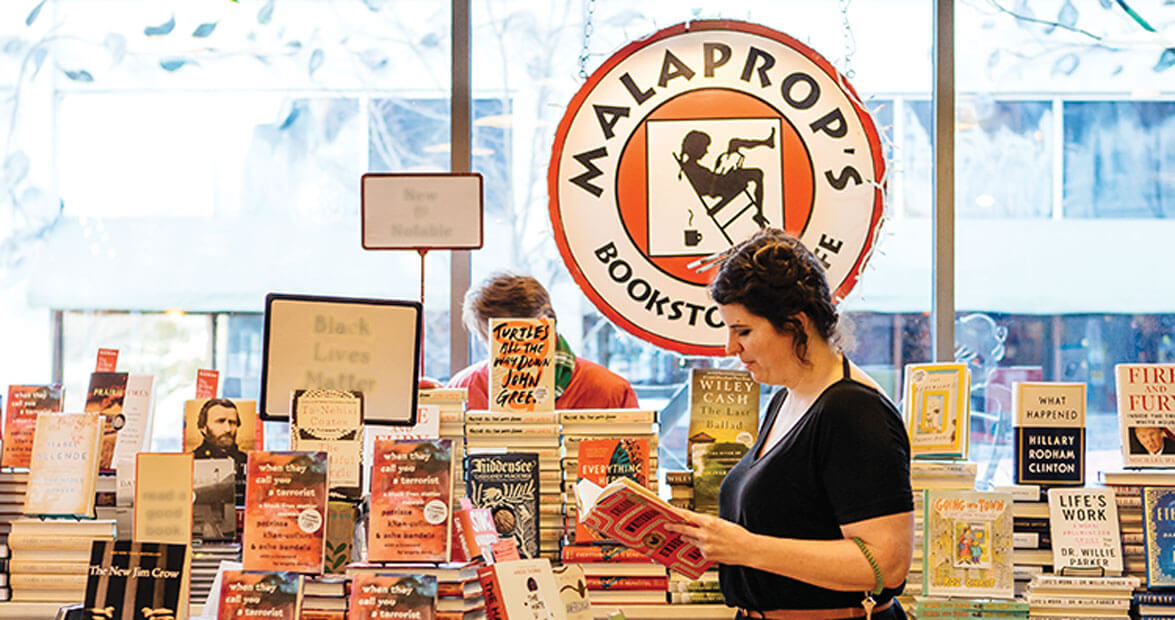 In the early 1980s, the streets of downtown Asheville were abandoned and forlorn, a far cry from the vibrant tourism destination that the city is today. That all changed when Emöke B’Racz opened Malaprop’s on Haywood Street. She stocked the original 2,000-square-foot building primarily with poetry and Southern literature, and opened a café in the basement; she wrapped every book that was purchased in craft paper and red ribbon. “Malaprop’s kind of set the tone for the whole downtown,” says author Ron Rash, who has frequented the store both as a writer and a reader since it opened in 1982. “It really is the heart and soul of Asheville.”

Rash was just getting started in his writing career when he first visited Malaprop’s. Soon after, they began carrying his first publications and inviting him to host readings at the store. “They carried those poetry collections and story collections when no one else did,” Rash says. “They believed in them, those early books, and put them on the shelves and helped establish a readership for me.”

Rash’s first reading drew 10 or 12 people, but the numbers grew quickly with help from the store. One night, Malaprop’s was so packed for Rash’s reading that they had to turn people away. “I’ve just been so grateful for that ongoing support,” Rash says. “There’s a debt I can never repay them.”

Author readings, book discussions, and guest speakers draw a crowd almost nightly, making this a coveted location for touring authors. “The store’s reputation is so great nationally that when major publishing houses decide on book tours, one of the first stores they think of is Malaprop’s,” Rash says. “They know they’re going to get a good turn out, there are serious readers there, and they know the staff will continue to support the books.”

When Mary Ruthless, an English literature graduate of Appalachian State University, had the opportunity to buy Black Bear Books in Boone from a former colleague in 2016, she couldn’t pass it up. She channeled her lifelong passion for reading into the new store, which she called Foggy Pine Books. Originally located in a 425-square-foot building, the Foggy Pine moved to a larger location in January to accommodate the growing number of books and visitors. The shop hosts a variety of book clubs for readers of all kinds, author signings, and story times, with “literary gifts and events for Boone’s bibliophiles.” They also run an authors consignment program, which allows North Carolina writers who are self-published or published by independent publishing houses to have their books promoted locally both in-store and online.

For more than 40 years, Park Road Books has been a Charlotte landmark, and it’s now the only independent bookseller in the city that offers solely new books. For visitors looking for a new read, their 2017 fiction and nonfiction bestseller lists give an insight into the books the residents of Charlotte enjoyed most last year. The store hosts author events weekly, as well as the “Foodie” and “Geek” book clubs. And if you stop in, you just might get to meet Yola, the store dog.

An art gallery that bloomed into a bookstore, City Center Gallery and Books has been downtown Fayetteville’s literary resource since adding “Books” to its name in 2003. Thousands of titles, from military history to mysteries, share a home with a gallery of original work by local artists and photographers. The store hosts book signings, lectures, and meet-and-greets with authors, and participates in Fayetteville’s 4th Friday events every month, when their doors stay open until 9 p.m. to welcome friends and neighbors enjoying the downtown festivities.

This bookstore and gift shop in the southwestern corner of the state has been keeping visitors curious — and at the same time supporting its surrounding community — for 18 years. Situated on a peninsula between the Hiwassee and Valley rivers, The Curiosity Shop is a hub of good conversation centering on books and current affairs. Owners Anne Silver and Kerry Archer are passionate about buying and selling products from service organizations such as Thistle Farms, a ministry that empowers, supports, and employs female victims of trafficking, prostitution, and addiction. While fiction is their bestselling genre on the book side, be sure to check out their selection of jewelry, candles, puzzles, and other gift items, too.

The Next Chapter Books and Art, New Bern

In a cozy brick cottage not far from both the Neuse River waterfront and Tryon Palace is The Next Chapter, a used bookstore that promotes the region’s authors. The shop hosts book signings, seminars, and workshops throughout the year, and also displays the work of local artists, including an “artist of the month.” With the promise of good literary and artistic conversation, this shop in historic downtown New Bern has been a cultural institution since 2007. Cozy up with a good book and a hot drink, but make sure you leave room for store mascot, Baybe the Pomeranian, to snuggle up next to you.

Books to Be Red, Ocracoke

Behind the signature red door of Books to be Red, owner Leslie Lanier sells everything from new and used books, to pottery and toys, to craft supplies and handmade gifts. Her hair is no longer the bright red from which the bookstore gets its name – a clever play on words – but her passion for books is as vibrant as ever. Housed in an 1898 cottage on the Outer Banks, Books to Be Red opened in 1995 in conjunction with Deepwater Pottery as Ocracoke’s only full-service independent bookstore. “The only books that I could buy on Ocracoke Island were little mass-market paperbacks in the grocery store, which is fun, but not exactly what I wanted,” Lanier says.

When a friend of Lanier’s asked if she wanted to open a small bookstore in the same building as her new pottery store, Lanier readily agreed. Books to Be Red and Deepwater Pottery coexisted in the same building until the owner of Deepwater moved away in 2003. Lanier now runs the two entities as one store, a unique destination for locals – and tourists. “It’s amazing to have these repeat customers that only come here once or twice a year, but they make a point to come into my shop – see me and say hello, buy a book, and still support me after 20 years,” she says.

Pittsboro’s Fearrington Village is home to McIntyre’s Books, a beloved bookstore that has attracted more than 3,000 visiting authors in its 28-year history. Founded and run by Keebe Fitch, McIntyre’s selection emphasizes children’s books, mysteries, cookbooks, and local authors. They also host the Bookends Book Club, where readers come together to discuss the works of writers such as Shirley Jackson, Edith Wharton, and Saul Bellow. With an extensive calendar of author events and readings, children’s story times, and book festivals, McIntyre’s has made a name for itself as one of the South’s best independent booksellers.

Charles Frazier was a budding writer when he visited Quail Ridge Books for the first time in 1986, but owner Nancy Olson treated him like the bestselling author he would become. He had just two published pieces at the time: a travel book on South America and a short story printed in an anthology. “She kept those on the shelves like I was a significant writer,” Frazier says. Over the years, a friendship blossomed. Olson helped him make connections with people in the book world, touted his first novel, Cold Mountain, to customers, and, when the time came for Frazier to take the spotlight, gave him advice on author readings. “She was a little miffed at me that I didn’t do my first event at Quail Ridge, but I was really anxious about doing those,” Frazier says. “I didn’t want to do the first one there if it was really not good; I wanted to practice a couple of times.”

When Frazier won the National Book Award for Fiction for Cold Mountain in 1997, Olson was at his side. “She’s been supportive to so many writers over the years – North Carolina writers especially, but lots of other writers, too,” Frazier says. “I’m rarely with a group of writers anywhere that somebody doesn’t mention what a supportive force she was in their lives and their careers.”

Olson died in 2016, but her legacy is carried on through her devoted staff. “A lot of the staff there has been there for years and years and years,” Frazier says. “You know them, you know their taste, you trust their advice, and it gives the place a feeling of community. There aren’t all that many businesses around these days that have that kind of continuity over the decades.”

What started in 1953 as two women selling books from their living room has blossomed into a sophisticated cultural landmark in Southern Pines. More than 60 years later, The Country Bookshop – now owned by local newspaper The Pilot – continues to serve as a gathering place and educational hub for residents and visitors, with story time, author readings, book clubs, and more. Recently, the store also established publishing services for independent authors, expanding its commitment to local and regional writers.

For readers drawn to the literature of western North Carolina, City Lights in Sylva is the place to be. Its wide selection includes bestsellers, handpicked selections from the staff, and even sheet music and audio books. But what really sets the store apart is its focus on regional works. Home to a notable collection of Appalachian fiction, poetry, and folk life, with selections from North Carolina writers such as Ron Rash and Fred Chappell, the store supports the long literary legacy of the western part of the state. When you stop in, don’t forget to say hi to the dapper tuxedo shop cat, Cedric, who keeps a watchful eye on the books.

In 1995, Lori Fisher traded the Great Lakes of Minnesota for the North Carolina coast, where she bought Quarter Moon Books in Topsail Beach. Whether visitors are in need of a birthday or anniversary gift, or are seeking a new read for those long summer days on the beach, they’re bound to find something to pique their interest at this bookstore situated “under the moon and by the sea, the happiest place to be.” The store offers a wide selection of clothing, gifts, and stationery, as well as an in-store and online collection of hundreds of books, from memoir to humor to travel. While you’re in, stop by the coffee and wine bar, where piña coladas and the white chocolate-espresso drink known as the “Iced White Whale” will keep you hydrated for swimming, sunbathing, and reading.

The Book Shelf has been a fixture in Tryon since 1952, and sells everything from national bestsellers to literary classics. Nestled at the eastern edge of the Blue Ridge Mountains, it’s the ideal place to settle in with some coffee and a new or old book.

From the bright yellow café tables along the outside of the long brick building to the vases of sunflowers placed between book displays, Bookmarks is one of Winston-Salem’s cheeriest and most inspiring spots. This creative aesthetic goes hand-in-hand with the nonprofit organization’s mission: encouraging a love of reading and writing in the community. In addition to the bookstore and gathering space, Bookmarks puts on the Carolinas’ largest annual book festival, and has hosted Pulitzer Prize winners and a national poet laureate for author events. They also founded the Authors in Schools program, connecting writers with thousands of students each year.