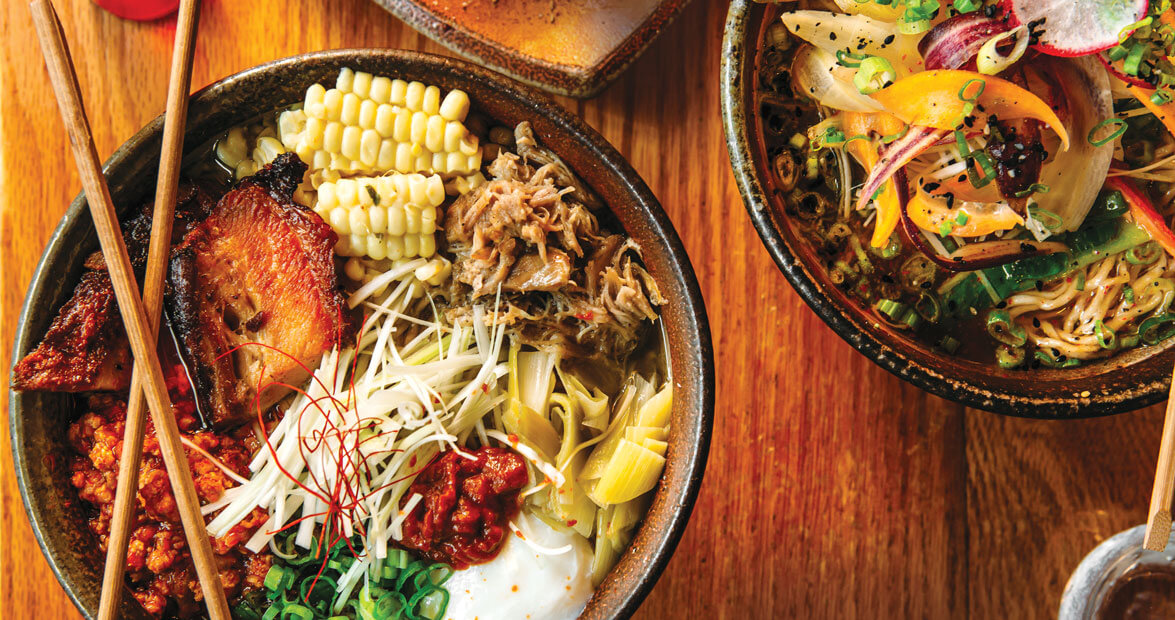 You can start your day with fresh corn tamales for breakfast, move on to Japanese ramen with an 18-hour broth for lunch, and end with Bosnian sausages for dinner. There are plenty of ways to eat around the world when you come to Charlotte. The trick is finding them.

What Charlotte does have is a world of food that’s jumbled together and located all over the place, from the young and hip restaurants that crowd districts like South End to the smaller family-owned places sprinkled around more affordable neighborhoods along Central Avenue and the outer reaches of Matthews.

“Charlotte is a globalizing city,” says Laura Simmons of the Urban Institute at UNC Charlotte. “To me, that’s one of the most exciting things about living here.” 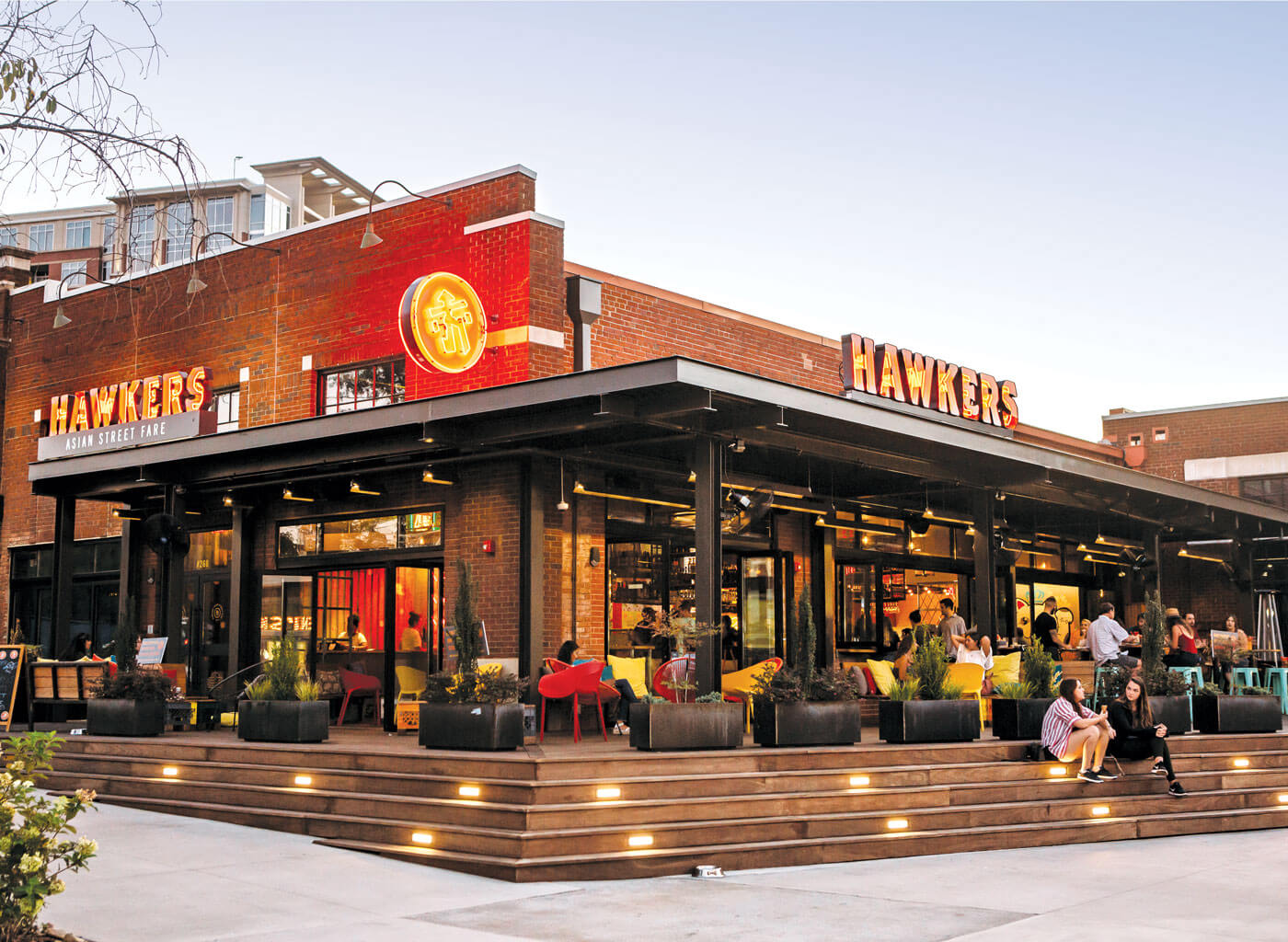 By far the biggest international population in Charlotte, Simmons says, are people from Mexico. That’s followed by people from Honduras, El Salvador, and Colombia. Asian countries are well-represented in Charlotte, too: People from India are the largest sector, but other countries of origin include Vietnam, China, and Korea. All of that diversity — racial, ethnic, and national — helps feed Charlotte’s economic success, Simmons says.

It also means that Charlotte is becoming a very diverse place to eat.

Today, there are dozens of international restaurants across the city. But how do you find them? Single districts where people group together by nationality are more common in older cities — this isn’t something that happens much in younger cities with newer immigrant populations, like Charlotte.

Instead, what you’ll find is what Charlotte historian Tom Hanchett has dubbed “the salad-bowl suburbs”: People are moving into areas with affordable housing and reasonable rates for commercial spaces, not distinct neighborhoods. The result is a mingling of ethnicities, like a mix of ingredients in a salad.

Which means that if you want to explore the city’s diverse food scene, you’ll need to get in your car — and be ready to venture into some holes-in-the-wall. These neighborhoods are a good place to start. You’ll find many more restaurants than we can list here, but this guide will give you a taste of international Charlotte.

Central Avenue has long been Charlotte’s most diverse corridor, attracting residents and restaurants from around the world.

Lang Van
One of Charlotte’s oldest Vietnamese restaurants, Lang Van opened in 1990. Today, it’s known for owner Dan Nguyen, who always remembers repeat customers, and for the menu of more than 130 classics. Don’t miss the bahn xeo, a crispy egg pancake; crispy-soft tofu with garlic; and pineapple fried rice served in a pineapple half. Surprise touch: Your check arrives with a little plate of Vietnamese cookies.

Euro Grill & Café
You can’t miss the sign at this Bosnian market with a tiny café on the side: “House of Cevaps.” The short, stubby sausages are a specialty, but so is the spicy Bosnian sausage. Both are served with a tasty flatbread called lepinja and the traditional sauces: ajvar (roasted red peppers) and kajmak (a creamy, milk-based spread). Save room for Bosnian coffee, served in a copper pot with a square of Turkish delight to hold between your teeth as you sip. 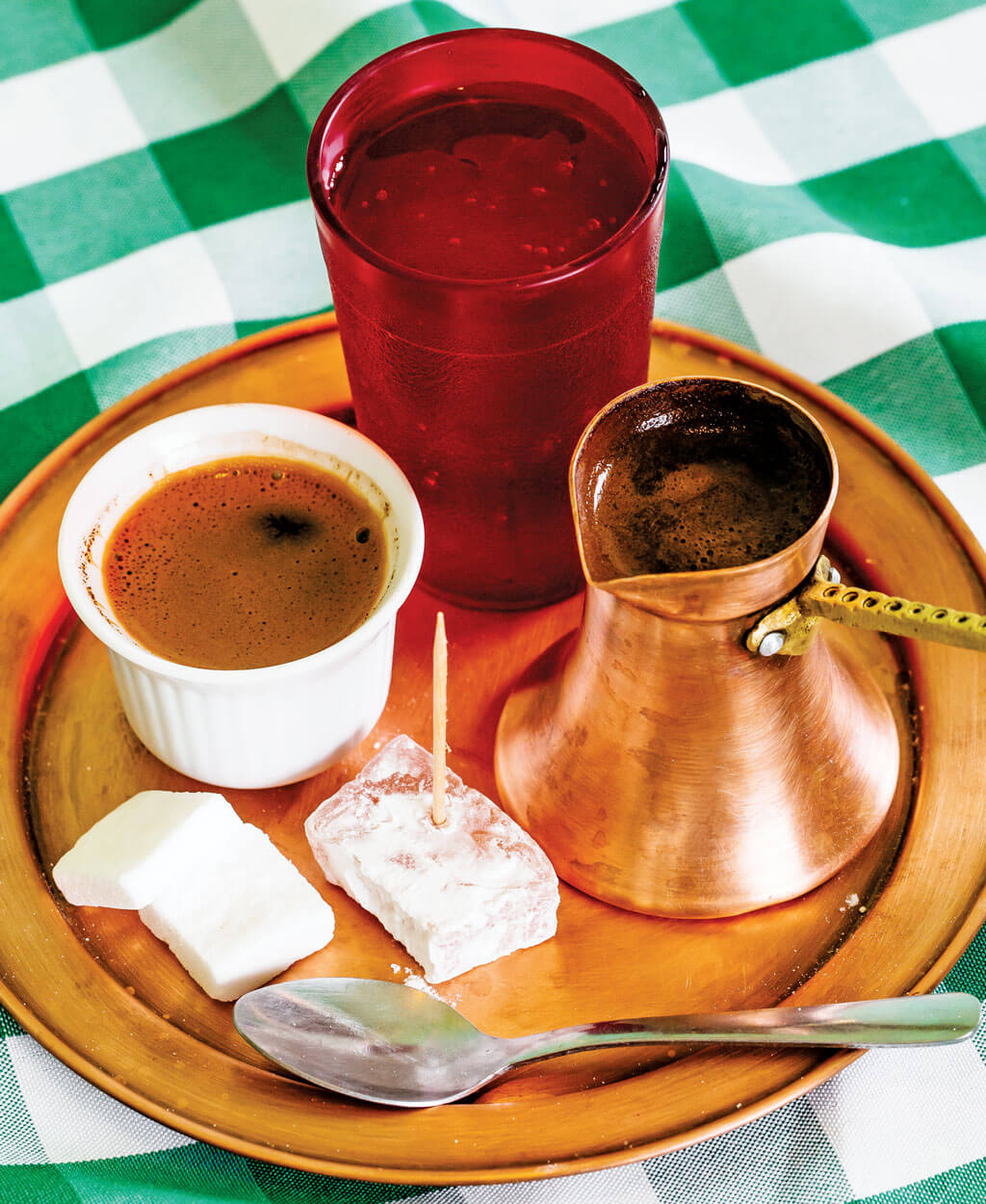 Tamales La Pasadita
This little restaurant is so spare and simple, you might think it’s not even open. But take a seat at the bar, and the women who run it will hurry out of the kitchen. There’s a short menu of things like mole, menudo, and excellent tacos, but tamales are the main event, with fillings that range from chicken to cheese to pork. They even have sweet tamales.

Thanks to Charlotte’s light-rail, what used to be an industrial neighborhood is now young, hip, and definitely happening. You can’t swing a set of earbuds without hitting a brewery, coffeehouse, or artisan ice cream shop. International restaurants here have a different vibe from the smaller cafés: Expect lines, excitement, and lots of noise.

Owners Tony Yum and Rosena Tong started in a small space on the outskirts of Matthews before moving into a much larger restaurant on South Mint Street near Uptown. Both are natives of Hong Kong, and Yum’s father was a Cantonese chef in San Francisco, but their food is totally Japanese: impeccable sushi and serious ramen, along with donburi (rice bowls) and curries. Since this is South End, there’s a cocktail bar, too. 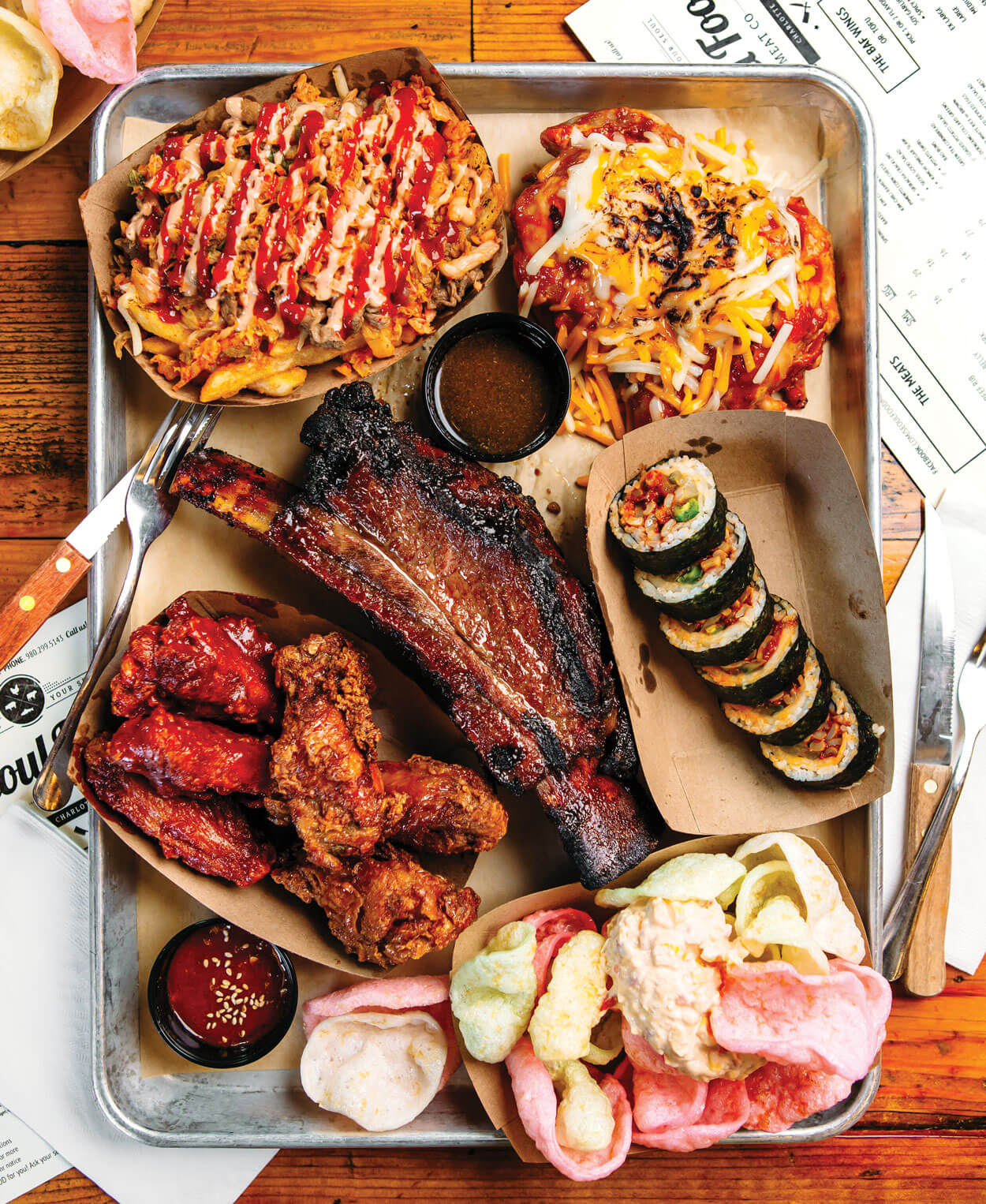 Hawkers Asian Street Fare
Based on the markets that pull together vendors in large Asian cities, Hawkers draws a diverse crowd with a menu of Korean-style wings, bao buns, rolls, wraps, and curries. Start with the roti, Indian flatbread served with a gravy-like curry sauce, and hope they’re not out of the Jo-He-Bag O’ Donuts when you get to dessert.

While some locals lament the lack of independently owned restaurants in this area, there’s plenty of diversity if you know where to look.

Bánh Mì Brothers
If you’re looking for a fun sandwich shop, this is your place. It’s fast-casual Vietnamese, with bright graphics and big chalkboards. The porchetta is made in-house with Chinese spices instead of traditional parsley and basil. Two dishes you won’t expect: Pho-tine, fries topped with meat and pho-flavored gravy, and freshly fried porchetta skins, the best version of pork rinds that you can imagine. 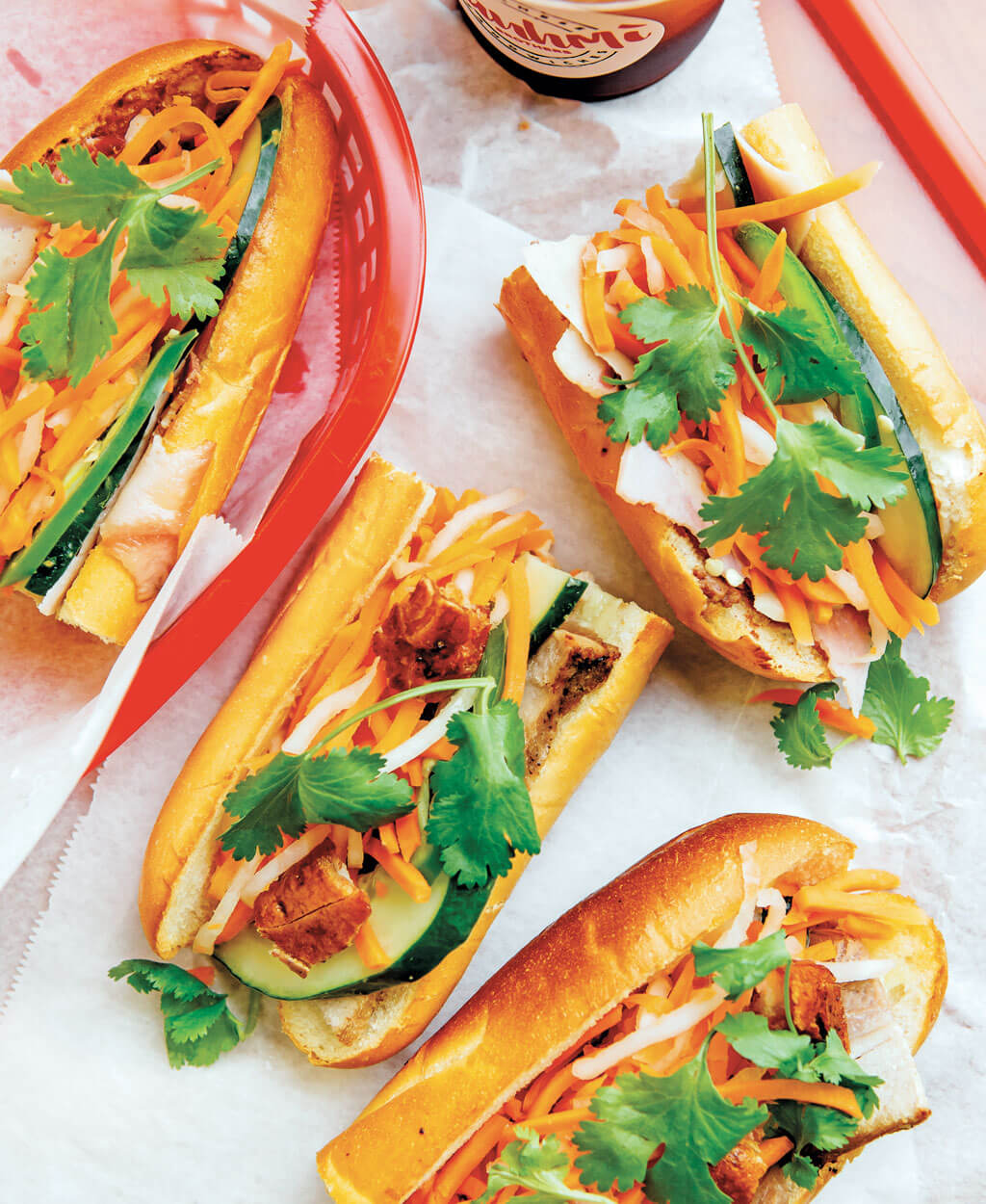 Zafran Kabab Palace
How about some Pakistani barbecue? Zafran, just beyond University City in Harrisburg, specializes in tandoori meats. If you go for lunch, there’s a traditional Indian-style buffet, but take a friend and order the mixed grill for two (or more). You’ll get chicken, lamb, and beef kebabs; seekh kebabs (ground meat packed around skewers); and Afghani-style rice.

Caribbean Hut
Tucked in a strip mall, this is full-on Jamaican, with a small bar and a full list of jerks, stews (including oxtail), curries, and meat patties. They even make their own fruit drinks. If you’ve never tried sorrel (a popular drink made from hibiscus blossoms), this is your chance. And, of course, they also have Red Stripe.

What was once a small farm town was long ago swallowed by Charlotte’s sprawl, merging small town and suburbia. Many immigrants find their homes here, where there’s more space and affordable housing than in the heart of the city, which means that shopping centers are peppered with a variety of international restaurants.

Lam’s Kitchen
Every town has Chinese restaurants that are tailored to the American palate. That’s not Lam’s: Chef and owner Joe Lam focuses on authentic Chinese dishes, including a heavy helping of Szechuan. Try the fiery tendon and tripe appetizer, rich clay-pot dishes, and elegant stir-fries. Even the familiar sesame chicken and orange chicken are a cut above. Plus, a clue that this tiny place is the real deal: Most of the seats are often taken up by Chinese families.

Kabab-Je
Middle Eastern food is popular all over Charlotte, but here, owner Yasser Sadek puts the focus on his native Lebanon, with falafel, kibbeh, shawarma, and fresh pita bread. If you can’t wait for a table (and the restaurant is often packed), there’s also a takeout case loaded with salads, meats, and prepared dishes. 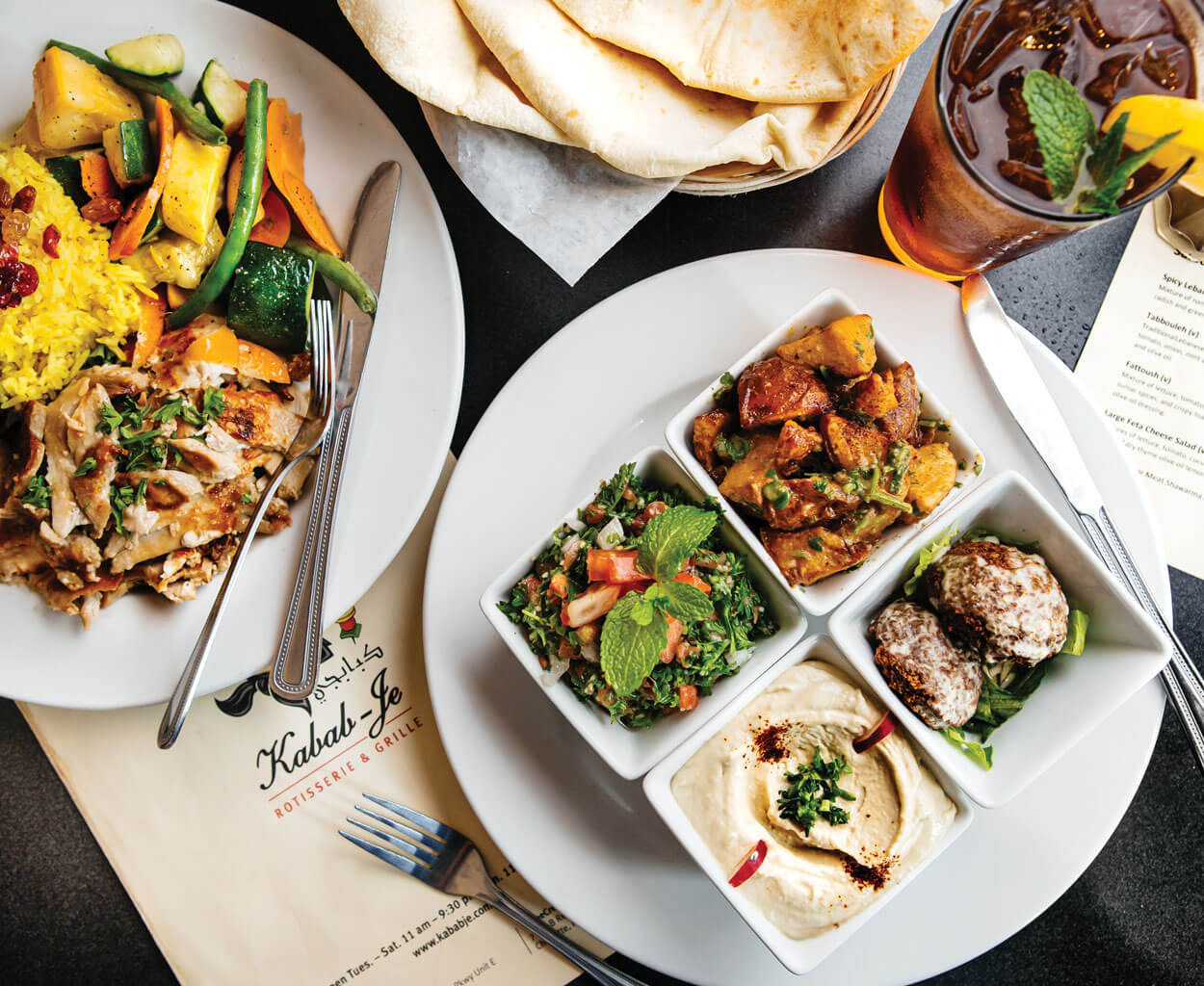 South Boulevard and South End parallel each other and sometimes overlap. But as you move away from the Uptown area, South Boulevard becomes more commercial — and more authentic. This area rivals Central Avenue for diversity, with smaller family-owned restaurants.

Punta Cana
The food here is thoroughly Dominican with touches of Cuba thrown in. Expect dishes that are tropical and richly flavorful, with plenty of plantains, shrimp, and fish, plus pork, chicken, and goat. Two favorites: chicharrón de pollo, chunks of bone-in chicken marinated and fried to a crisp, and Dominican-style mofongo, a garlicky mound of green plantains that have been fried and mashed. 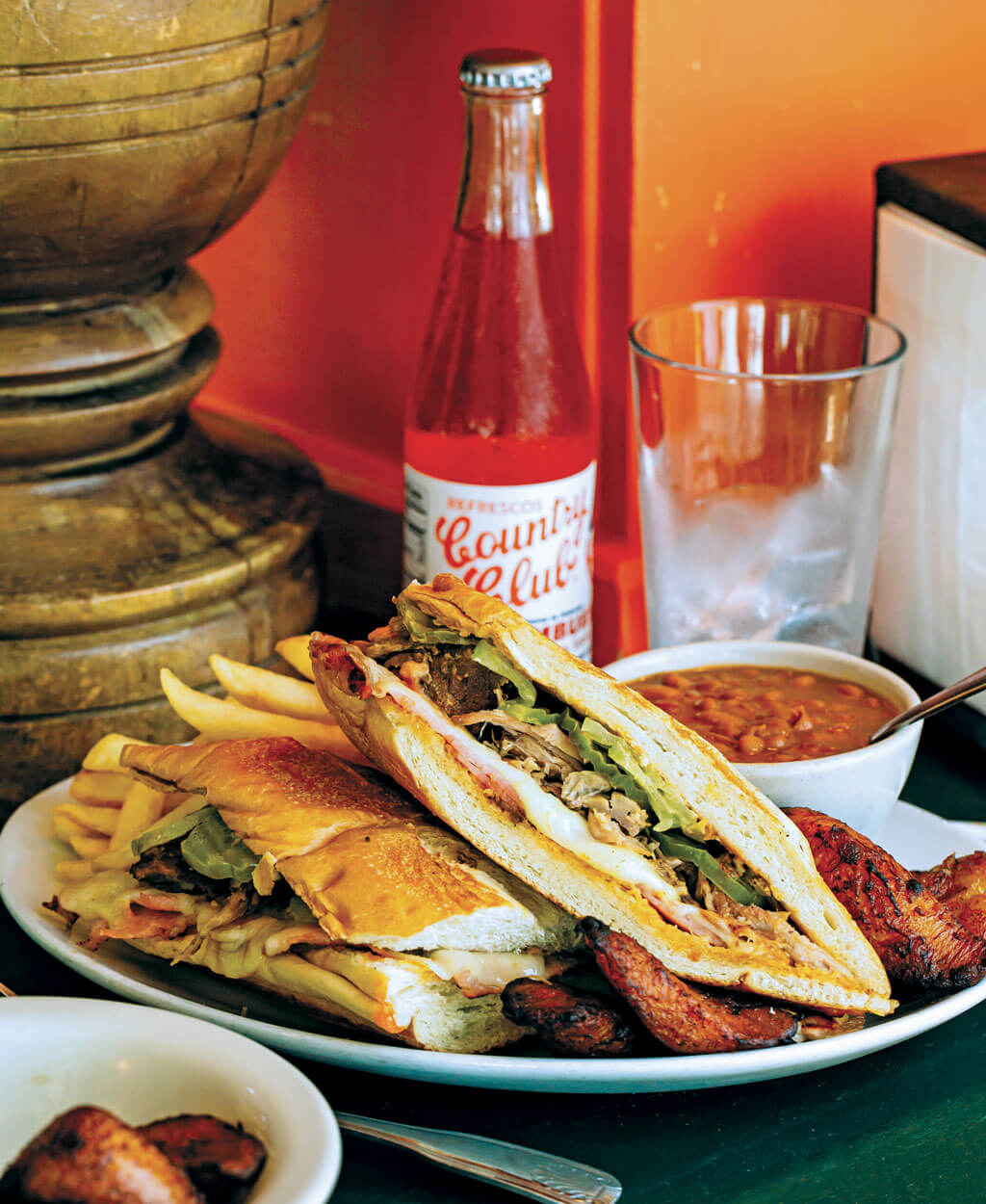 At Punta Cana, order your Cuban sandwich — stuffed with Swiss cheese, roasted pork, and dill pickles — with a side of fried plantains. photograph by Tim Robison

Choi’s Korea & Wing
This neighborhood spot draws fans of bulgogi, bibimbap, and yaki mandu (dumplings). Pace yourself: Entrées come with a half-dozen banchan (side dishes), including kimchi and several kinds of pickles.

Arepas Grill
Venezuelan arepas are a little like sandwiches: Griddled cornmeal cakes are stuffed with fillings such as shredded beef, cheese, and beans, or shredded chicken and avocado. (Colombia’s version is usually topped instead of stuffed.) And the ones at Arepas Grill are irresistible. Take note: It closes by 6 p.m. most evenings.

Vietnam Grille
There are pho houses and Vietnamese restaurants all over Charlotte, but this one has more fish and seafood, plus a long list of tasty vermicelli and rice dishes.