A few minutes past midnight, Tuesday, January 24, 1961: The weather station at Seymour Johnson Air Force Base in Goldsboro records clear skies, light winds, and cold temperatures. The three network TV stations have signed off for the night. Some 84,000 residents of Wayne County, about a third living in Goldsboro, are snug in their beds, or awake tending to a sick child, or reading a book, or doing any of a hundred other routine nighttime activities.

They are blissfully unaware that, more than a mile over their heads in the night sky, a pair of thermonuclear bombs has been unleashed from the bomb bay of a strategic long-range bomber in distress. That one by one, in prearranged sequence, bomb-arming steps are taking place — without any human input. That, evidence later suggests, only a single crude switch, operated by a standard 28-volt signal from the abandoned aircraft, may stand between them and a 3.8-megaton atomic blast — 250 times the destructive power of the 0.015 MT warhead that obliterated Hiroshima.

The swept-wing B-52 Stratofortress, call sign “Keep 19,” took off from Seymour Johnson Air Force Base, a pilot-training field deactivated following World War II, reactivated almost five years ago, and now home to the 4241st Strategic Wing. The plane’s mission is a routine 24-hour patrol along the Eastern Seaboard. It carries a crew of seven highly trained officer specialists and a sergeant gunner, commanded by Maj. Walter Tulloch. The B-52 is a weapon of deterrence in the Cold War between the U.S. and the Soviet Union — part of the “assurance” in the apocalyptic strategy of “Mutually Assured Destruction.” Neither superpower can launch a first nuclear strike without facing the certainty of its own annihilation in retaliation.

The Boeing Stratofortress stretches nearly 160 feet long with a wingspan of 185 feet, standing more than three stories tall. It has a top speed of 650 miles per hour — approaching Mach 1, the speed of sound. It carries two Mark 39 Mod 2 nuclear bombs. Each snub-nosed cylinder is about 11 feet 8 inches long, with a diameter of almost three feet, and weighs three tons.

“Keep 19” has been airborne for many hours, closing in on its operational range of just under 9,000 miles, and now it needs fuel to keep its eight Pratt & Whitney turbofan engines roaring. The airborne tanker rendezvouses with Major Tulloch’s aircraft and maneuvers the fueling boom into the fill atop the forward fuselage.

“It was dark. The house started shaking and trembling — everything was just shivering.”

But it’s clear to the crew of the tanker plane that something is wrong, and they radio Major Tulloch: Fuel is spilling from his right wing — more than 5,400 gallons, nearly 19 tons, in just three minutes. They disengage the boom and back off, while Major Tulloch tries to get the plane back to the landing field. He struggles to control his aircraft, now dangerously out of trim and losing altitude fast. The right wing breaks off the fuselage. He orders the crew to bail out. Five crewmen eject.

The No. 3 pilot, First Lt. Adam C. Mattocks, speaking with The State of Things in 2013, recalls his escape from the disintegrating plane: “I said to myself, I’ve got two ways out. I can’t walk downstairs fast enough to get out … so I decided to jump, make the turn, and go out the aircraft commander’s hatch.” The aircraft breaks apart and crashes in a flaming debris field that covers two square miles.

Five of the six airmen survive the jump, all of them injured. Maj. Eugene Shelton, the radar navigator, is killed on landing, his parachute tangled in a tree two miles from where the fuselage hits. The bodies of the electronics warfare instructor, Maj. Eugene Richards, and the gunner, Sgt. Francis Barnish, are recovered from the nose of the crashed aircraft, far from their duty stations in the tail.

As the plane tailspins to earth, somewhere between 9,000 and 7,000 feet, the first bomb positioned in the aft bomb bay door is released and parachutes to earth a mile ahead of the crash site, 15 miles northeast of Goldsboro near Faro. Its parachute snags on some trees, and the projectile lands upright, its nose buried 18 inches in the soil. As a classified analysis by the Sandia Corporation determines, the second bomb is released through the forward bomb bay door between 5,000 and 2,000 feet. Its parachute fails to open, and it strikes the ground, blasting an eight-foot-wide crater. The “secondary subassembly,” containing enriched uranium, buries itself deep in the soft bog of a field verging Nahunta Swamp.

Diane Mozingo (née Grimes), 6 years old, lives with her family on a farm about a mile from the crash site. “It was dark,” she recounts. “The house started shaking and trembling — everything was just shivering.” Her father says it must be a plane flying way too low, and with her uncle and some other neighbor men, he goes out to investigate. “I remember the windows and glasses shaking, then my dad running out of the house to go to where the plane went down. A few of the men in the neighborhood were the first ones to arrive at the crash.” She is too young to realize what is happening, but she never forgets the fear: “I remember I was so scared — that’s the only thing I truly remember, how scared I was till my dad came home.” 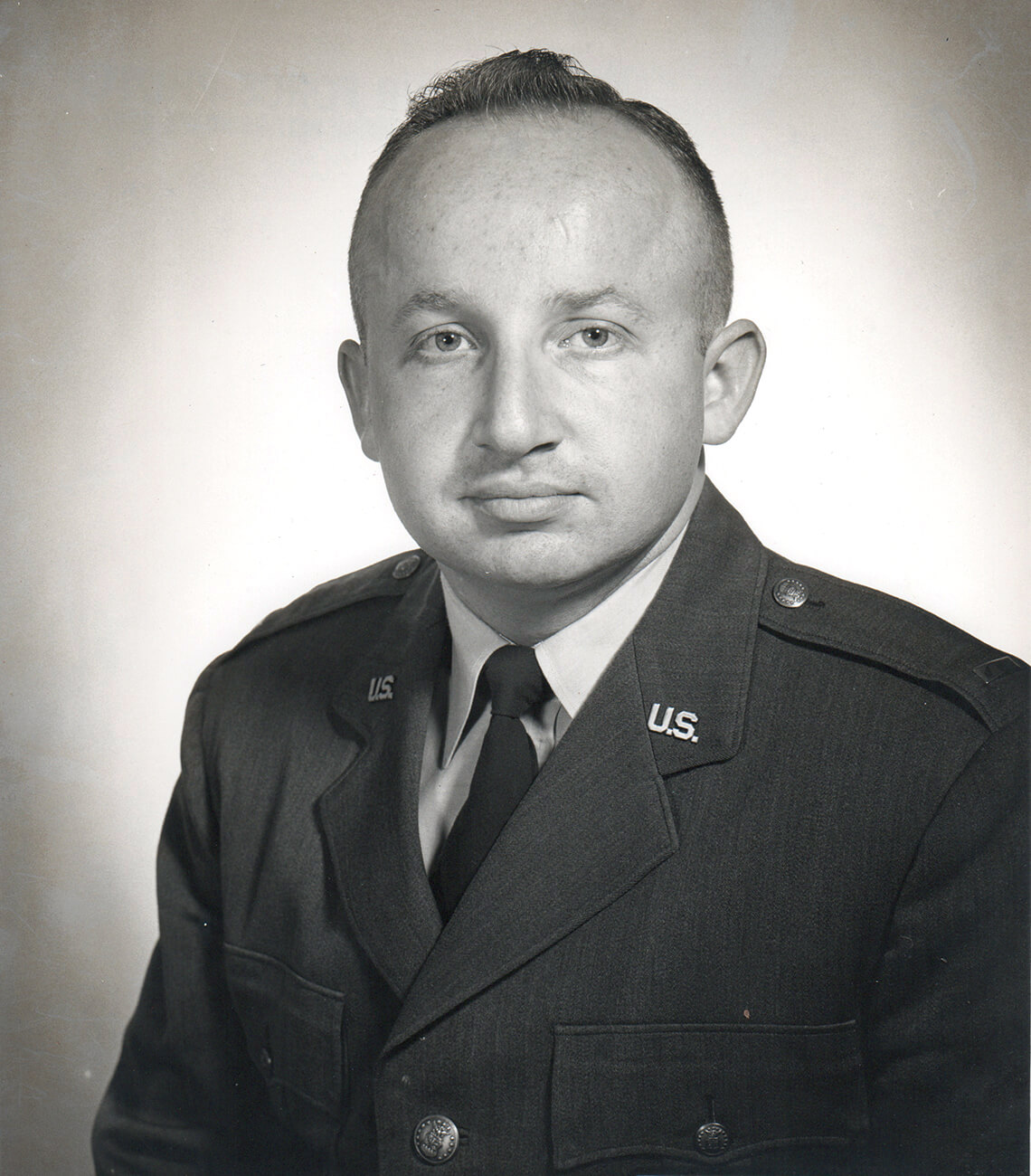 The commander of the Explosives Ordnance Disposal (EOD) unit, Lt. Jack ReVelle, later recounts to StoryCorps, “One night, I get a call from my squadron commander. And instead of using the code words that we had rehearsed, he says, ‘Jack, I got a real one for you.’”

With his crew — nicknamed the Terrible Ten — he finds the first bomb intact. “Once we determined it was safe to handle, we used the crane to tip it over and put it on the back of a flatbed truck.” But the second bomb presents a problem, as ReVelle recalls: “This huge, multi-ton weapon penetrated the ground at 700 miles an hour and buried itself in the swamp.” 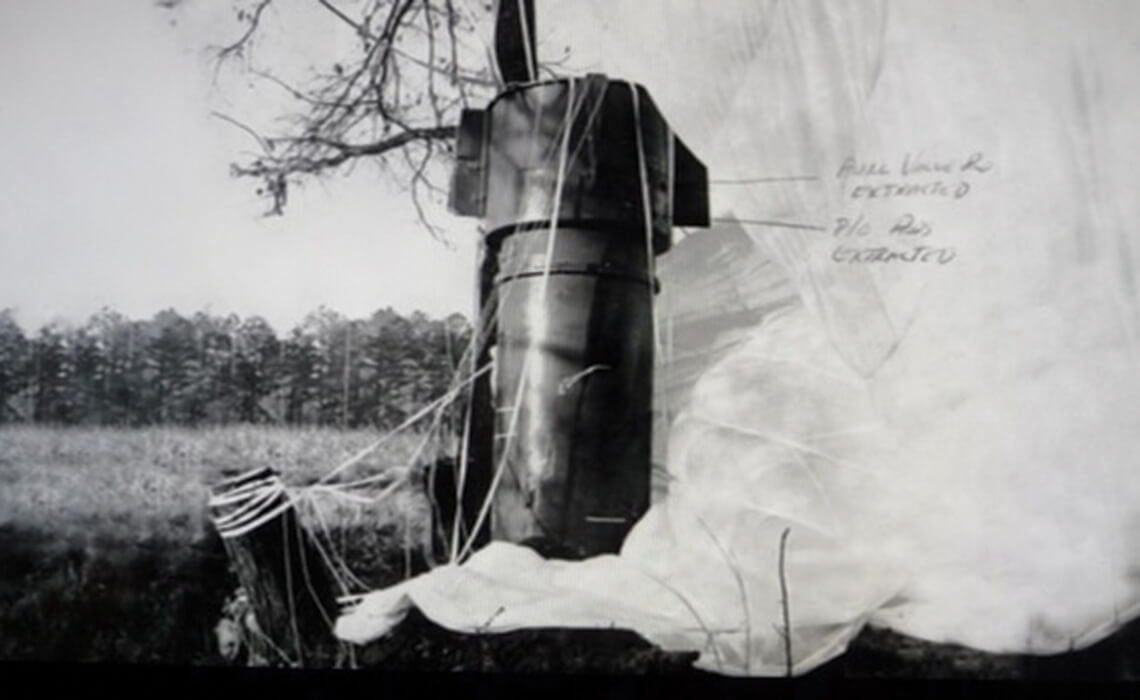 When the Explosives Ordnance Disposal unit arrived after the crash, the first hydrogen bomb was easy to spot: It stood upright, its nose buried 18 inches in the soil, its parachute tangled in the trees. photograph by U.S. Air Force

ReVelle’s Terrible Ten dig for more than a week, enduring snow, rain, and freezing temperatures, excavating to a depth of 40 feet. They recover 92 detonators and the uranium 235/plutonium 239 core of the two-stage bomb, hauling it up a wooden ladder by hand. But they never find the secondary. In the mucky soil of the tobacco field, they can hardly keep the digging equipment from sinking into the mire.

The U.S. Government buys an easement for $1,000 from the owners of the field, leaving the nuclear component entombed in the ground at an estimated depth of 180 feet. It does not disclose the nature of the missing ordnance — the official story is that the diggers are hunting for an aircraft seat.

“Instead of using the code words that we had rehearsed, he says, ‘Jack, I got a real one for you.’”

Raleigh lies 50 miles northwest, and Fayetteville and Fort Bragg are 60 miles southwest. Had either bomb detonated, some projections suggest that the blast could have instantly killed an estimated 28,000 people and injured another 26,000. The fallout likely would have affected dozens of neighboring towns — such as Eureka, Kinston, Wilson, Greenville, Mount Olive, and Rocky Mount — then could have spread northeast on prevailing winds to Baltimore, Washington, D.C., Philadelphia, and New York, with catastrophic results.

“You have to understand,” ReVelle tells StoryCorps. “Had one or both of the weapons detonated, you would’ve created a bay of North Carolina, completely changing the configuration of the East Coast of the United States.”

Hear Jack ReVelle tell the story of how his disarmed both bombs in this episode of Away Message:

The postmortem finds that, as expected, the crew did not pre-arm either bomb before they were accidentally released as the aircraft broke up. But the contract investigators from the Sandia Corporation reach a chilling conclusion: “Some events normally requiring crew action must have occurred mechanically due to aircraft breakup.”

In fact, three different arming mechanisms were accidentally activated: So-called “safing pins,” designed to be yanked out manually by crew, were pulled; thus, “actuation rods” were extracted, turning on the Bisch generator that gave power to the bomb, and baroswitches began to calculate air pressure, counting down to the moment when the maximum detonation altitude of 1,500 feet was reached. Therefore, on “both weapons the fuzing sequences were initiated.”

The T-380 Readiness Switch, controlled from within the aircraft, was not triggered — though the impact of the second bomb rotated its receiver switch to the “arm” position while simultaneously damaging the continuity of the switch contacts. In other words, while the cockpit switch was never turned on to signal the bomb to arm, the violent collision with the ground apparently turned the receiving switch on the warhead to the “arm” position anyway — but broke it at the same instant. The circuit was never completed, so detonation was not triggered.
“Until my death, I will never forget hearing my sergeant say, ‘Lieutenant, we found the arm/safe switch,’” ReVelle tells StoryCorps. “And I said, ‘Great.’ He said, ‘Nah, not great. It’s on arm.’”

Wearing no special protective gear except gloves, ReVelle cradles the “demon core” and deposits it in the EOD truck for passage back to the air base.

Investigators conclude, “The Arm/Safe switch prevented a nuclear detonation in these weapons as it was designed to do.”

The government keeps the secret of what happened here for more than half a century. Though there is no denying that a fiery crash occurred, tossing sleepers out of their beds and lighting up the fields for miles around, the citizens of Goldsboro and Wayne County wake to find their lives mostly unchanged. They go about their daily routines unaware that, thanks to one incomplete circuit, they may have escaped a nuclear catastrophe. 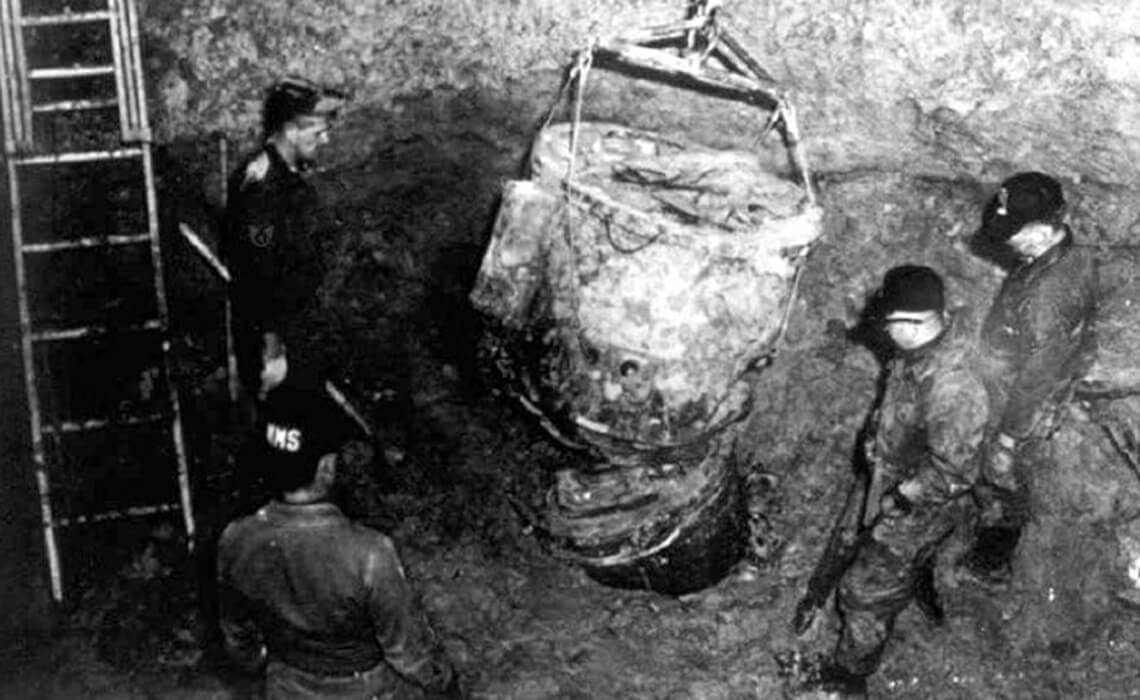 Lt. Jack ReVelle was 25 when he and his crew disposed of the bombs. Over eight days, they dug a deep hole and retrieved most of the second bomb, including its parachute pack. photograph by U.S. Air Force