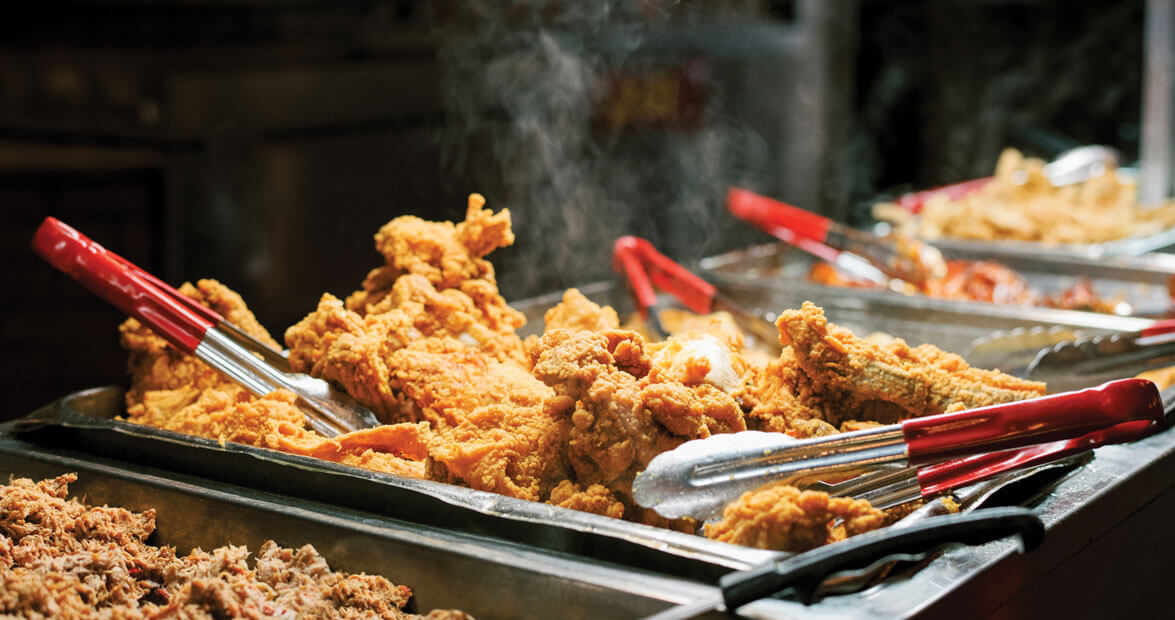 Sheryl Warga is hard-pressed to think of a Sunday when Pastor Elliott hasn’t eaten at her family’s buffet in Hope Mills. But for a split second, she’s also hard-pressed to think of the pastor’s first name. “I just call him Dad,” she says with a laugh. (His name is Abe.) The pastor of Elliott Chapel Church in Fayetteville has been a regular at Grandsons since it opened in 2005, and is now part of an ever-extending family. “And he’s just one of many!” Sheryl says. 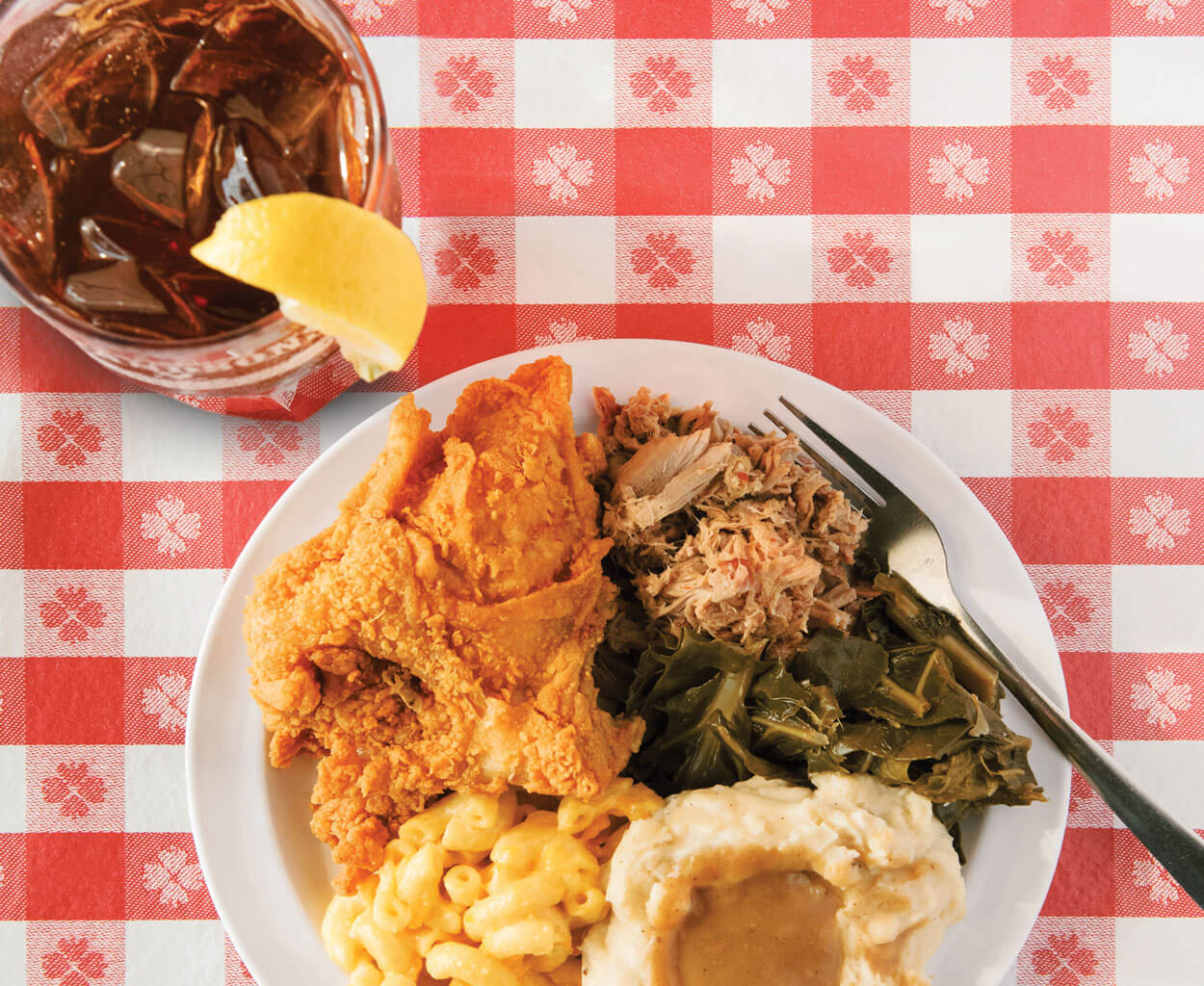 Fred Chason’s grandson Todd Warga opened a buffet restaurant in honor of his grandfather’s barbecue joint. The fried chicken is a Sunday blessing for local home cooks, who can enjoy the tradition without all the work. photograph by Faith Teasley

As the name implies, Fred Chason’s Grandsons is a family place where customers quickly become regulars. Originally, it was simply Chason’s Barbecue, a restaurant that Fred Chason opened in nearby Lumber Bridge, known for its knockout blueberry crunch. Sheryl started working as a server in the mid-1990s and met Todd Warga, Chason’s actual grandson, who was a cook. The two eventually married, and a decade later, following Chason’s death and a fire in the original building, they opened their own spot as a tribute. “It was a dream for both of us,” Sheryl says. “We jumped in headfirst, and we’ve been going ever since.”

Even at the restaurant’s additional locations — in Fayetteville, Smithfield, Rocky Mount, and Garner — fried chicken is a buffet favorite, with Chason’s mac ’n’ cheese recipe running a close second. “We’ve truly been blessed,” she says. “We’re all about a family atmosphere. We want people to feel like they’re home.”

Wayne Abele Sr., a local restaurateur and Burke County commissioner, had managed to peacefully negotiate the end of his Shoney’s franchise contract and start a new business. Then came the hard part: what to call his new spot. “I was thinking of all these jazzy names,” he says. “Jazzy names!” Then his friends jumped in with a better solution. “Heck,” they told him. “Everybody knows you. Just call it Abele’s.”

That straightforward attitude is reflected in Abele’s hot vegetable bar, which features more than 20 options each day — nothing jazzy, just dishes that are simple and satisfying. “We do a lot of things the old-fashioned way,” Abele says. “We make our own cornbread, which is really a winner. Our mashed potatoes, green beans, and greens are also mighty popular.” 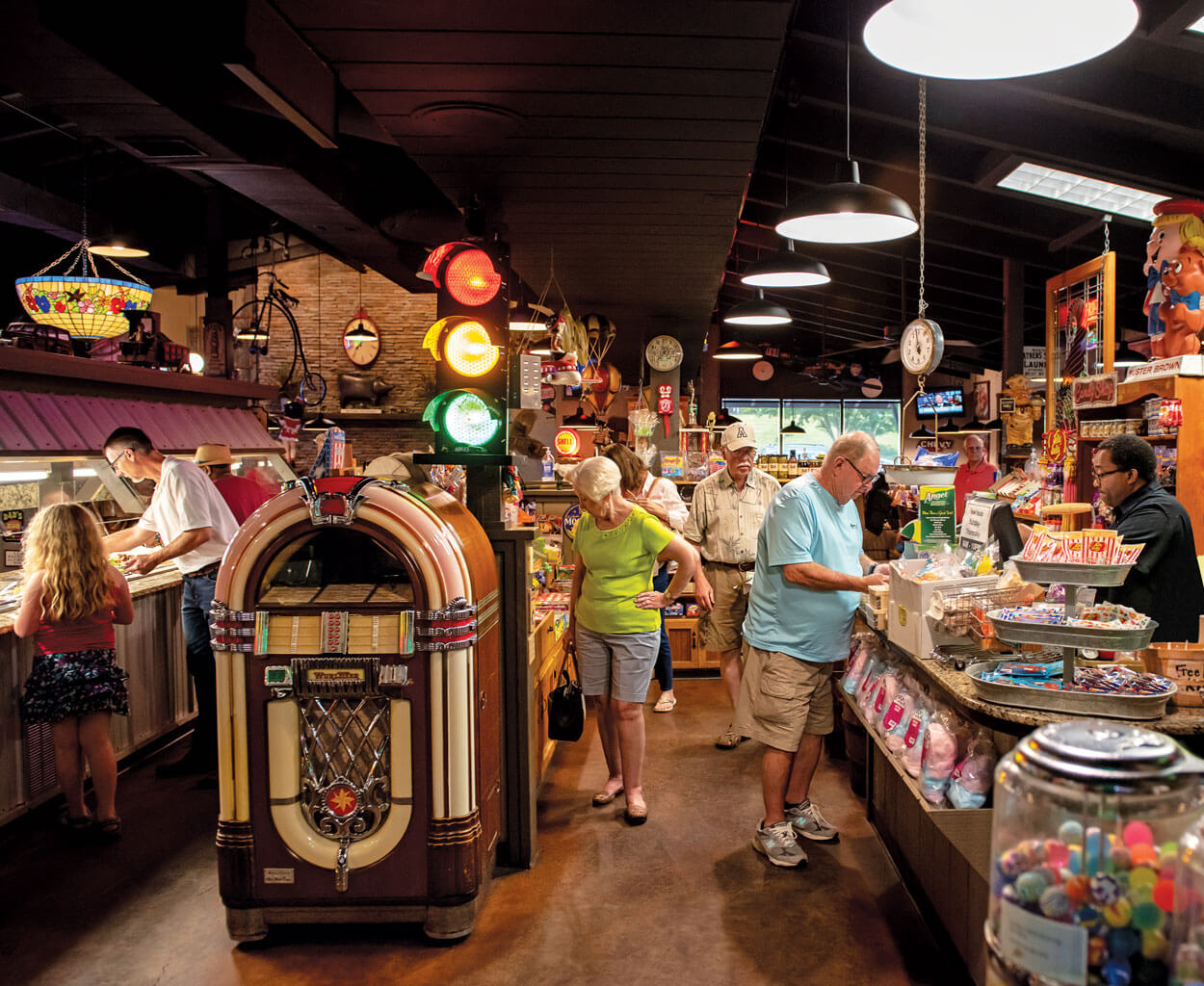 If the all-you-can-eat vegetables, soup, salad, and fruit don’t fill you up at Abele’s Family Restaurant, the candy counter might do the trick. photograph by Jack Sorokin

While the vegetables are all-you-can-eat, the main dishes are handled a little differently at this buffet. To keep things fresh, Abele’s offers made-to-order meat options — hamburger steak, liver and onions, grilled ham steak, and others, depending on the day. And if that isn’t quite enough, there’s also a salad, soup, and fruit bar. But Abele is quick to point out that the restaurant is “not just a buffet.” The menu features burgers, sandwiches, and seafood platters, along with a whole page dedicated to dessert and ice cream, including a Tonka dump truck filled with scoops.

A Saturday morning crowd gathers for the breakfast buffet, with its endless stacks of pancakes, biscuits, bacon, and the rest. But the busiest day is Sunday, when churchgoers stream in — the county has 40 Baptist churches alone. Still, Abele says that once a week is just not enough for some: “We get a lot of customers who come daily.”

There was no money left for a new sign. So 35 years ago, when Teresa and Ray Williamson took over Granny’s Kitchen in Cherokee, they kept the old one — and with it, the buffet’s name. “We did everything wrong,” Teresa says. “There was no business plan, nothing. We just knew we knew how to work.” That was enough.

Teresa got her start in restaurants at age 11, employed by her grandmother at the Sequoyah Restaurant in downtown Cherokee. “I was a tall girl, so I worked behind the steam table, dishing out food,” she says. Her post also kept her hidden in plain sight from inspectors, who might have questioned her young age. Ray was a little older, 16, when he began a stint in the Granny’s building, back when it was known as Critzer’s, named for the original owner, Amy Tahquette Critzer.

“She was a tough little businesswoman,” says Teresa, who is clearly much the same. She’s been keeping Granny’s going for more than three decades, and she’s raised three children who now have managerial roles there. 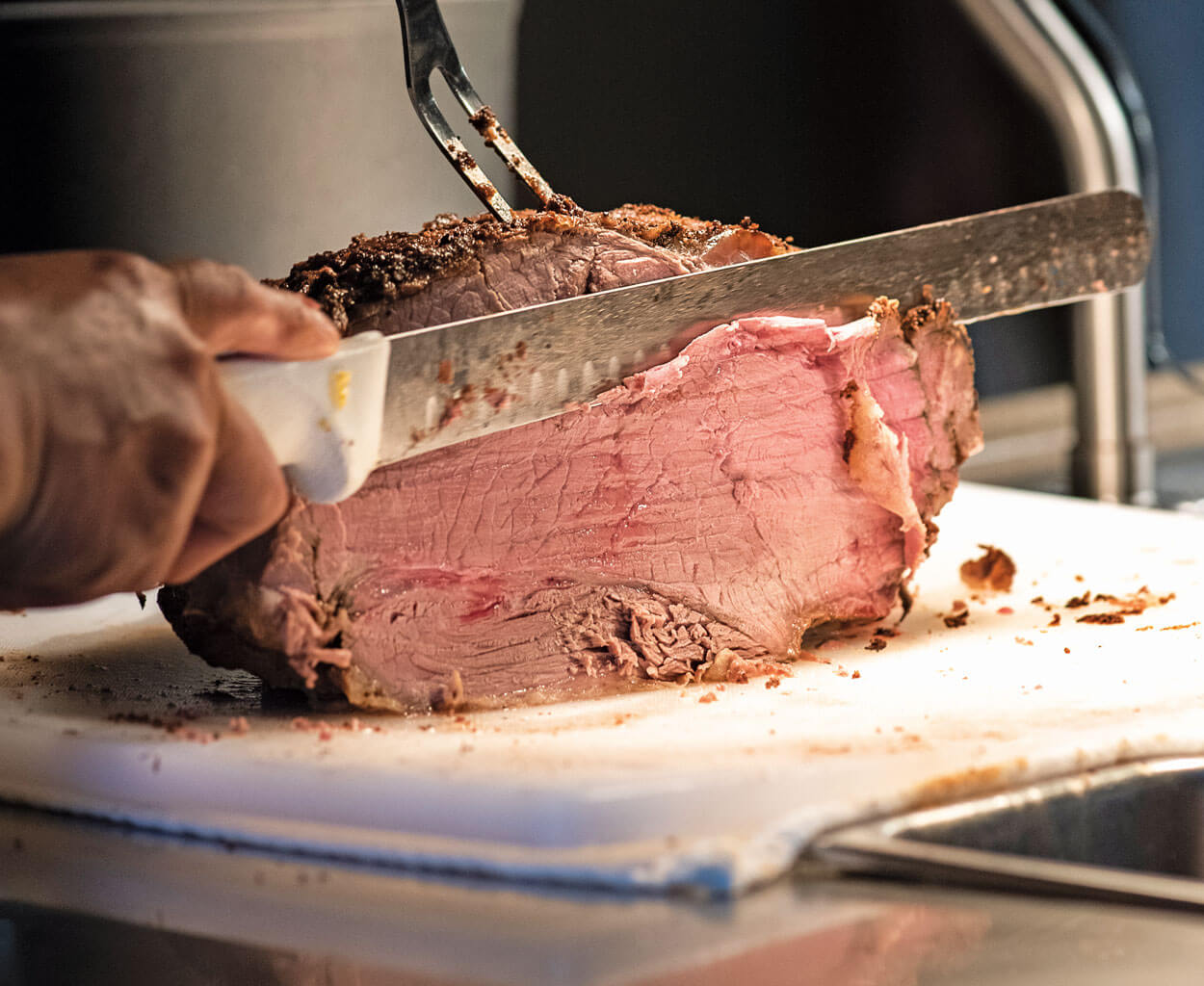 A classic Sunday roast is the star every night at Granny’s Kitchen, where a carver will serve your slices to order. photograph by Jack Sorokin

Like most things in Cherokee, the restaurant benefits from the tourism industry, drawing diners from Harrah’s Cherokee Casino Resort a mile down the road. But it’s also a hub for the local community. Granny’s caters events for the Cherokee tribe and others, and keeps the regulars happy — including the Sunday church crowd — with fried chicken and roast beef. “There are some people that come from Sylva and some from Franklin and some from Bryson City,” Teresa says. “We have some that are just as regular as clockwork.” They come in search of particular weekly specials: Tuesday lunch is country-style steak; Thursday is turkey and dressing. The Sunday buffet has something for everyone. “People have their favorite days,” she says, “and if you try to change, people get mad at you.” But Teresa has no plans to change anything about Granny’s. “We kind of like the old gal,” she says.

A few days before Fuller’s 30th anniversary, Hurricane Matthew bore down on Lumberton and flooded the restaurant with six feet of water. Second-generation owner Eric Locklear assessed his business by boat, salvaging family photographs from the walls. Longtime employees and family members scrubbed pots, pans, and storage racks. But the restaurant couldn’t reopen on a floodplain, so Locklear took the buffet down the road to Pembroke. Adaptation has been part of Fuller’s history since its start in the mid-1980s, when Locklear’s parents left their tobacco and corn fields to sell pit-cooked barbecue. They set up a small buffet, adding more and more dishes — and customers. Today, those customers still line up for barbecue, rutabagas, and chicken and pastry: a Robeson County Sunday dinner that tastes just like home.