The Irregardless Café is known for a lot of things. In 1975, it opened smack in the middle of a state capital that ran on red meat and pork, but was strictly vegetarian and — a word rarely heard back then — vegan. It came back after a 1994 fire with reimagined menus (including meat and seafood), but with the same commitment to fresh, healthful cooking.

One thing on the menu inspires widespread obsession: lemon tahini salad dressing made with a creamy mixture of tamari, lemon juice, tahini (sesame paste), oil, and some vegetables, whirled in a blender. It has been on the menu since chef and owner Arthur Gordon opened the restaurant, and is by far the most popular dressing there. If you get hooked on it, like thousands of others, you can purchase bottles at the restaurant.

This 64-year-old hangout, Players’ Retreat, isn’t like an average sports bar. There are 54 types of Scotch, and more than 100 wines, a list that has earned the vinyl-boothed, Formica-tabled restaurant and bar Wine Spectator awards four years in a row. You could have a $100 bottle of red with your Wolfpack Burger (topped with slaw, mustard, and chili). On Friday and Saturday nights, the chef offers seasonal fine-dining entrées using local ingredients, such as honey Sriracha shrimp with black bean puree, corn cake, corn salsa, and cilantro crema. “We wanted people to see it’s still the PR,” says owner Gus Gusler, referring to the place’s old nickname, “but you don’t have to just eat fried food here.” 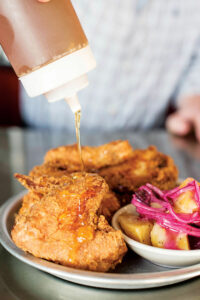 Chef Ashley Christensen, who in 2014 was named the Best Chef in the Southeast by the James Beard Foundation, and in 2019 was awarded Outstanding Chef, keeps branching out. Beasley’s Chicken + Honey slings chicken Southern and fried.

First it was a pie shop, in 1945. Then it was a 1950s luncheonette. When Christensen opened her first restaurant at Poole’s Downtown Diner, she knew its history would inspire everything — and that the S-shaped vintage bar that snakes throughout the space would remain the same. When naming Death & Taxes, she was equally inspired by the building, once home to a funeral home and a bank. The food, however, is inspired by far warmer tones: her ode to cooking with wood and flame.