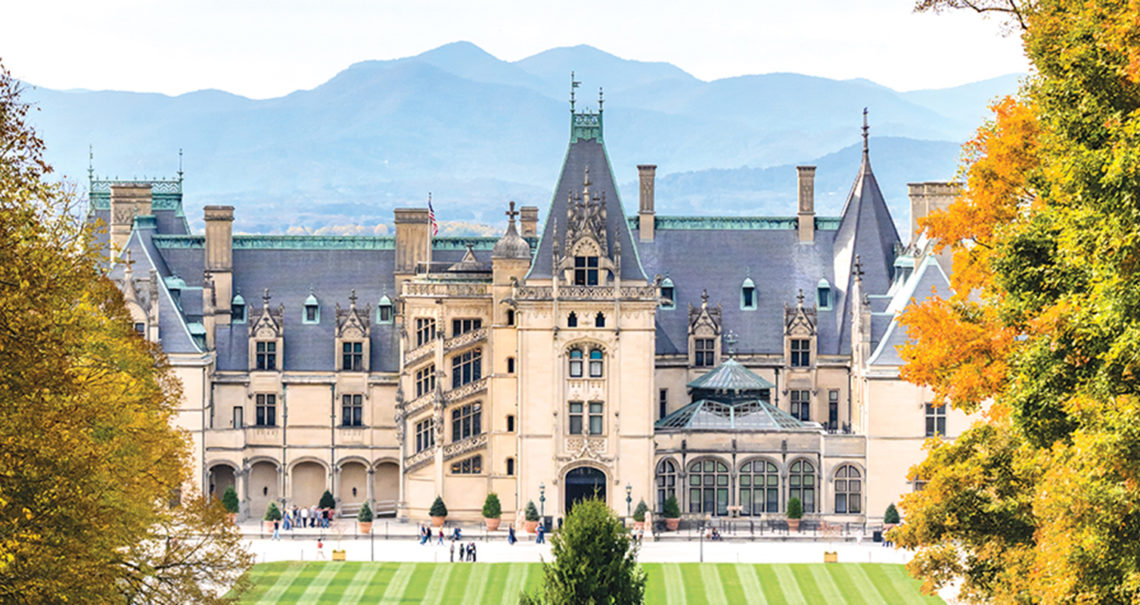 A library with 22,000 books. A banquet hall with 70-foot ceilings. Thirty-five bedrooms, 43 bathrooms, and 65 fireplaces. A swimming pool and a bowling alley. With more than four acres of floorspace, Biltmore Estate is, unsurprisingly, the largest private home in the country. Since 1930, when the Vanderbilts opened their home to the public, people have come to Asheville to visit the 250-room French Renaissance château, completed in 1895, and the immaculate gardens designed by famed landscape architect Frederick Law Olmsted. Today, there’s also a winery housed in the former dairy barn, two inns, and modern shops and restaurants. A self-guided tour of the house covers three floors and the basement, each with rooms authentically decorated with antique furniture, vintage clothing, and fine art that once belonged to George and Edith Vanderbilt — making it appear as though the couple could walk through the door at any moment. — Katie King 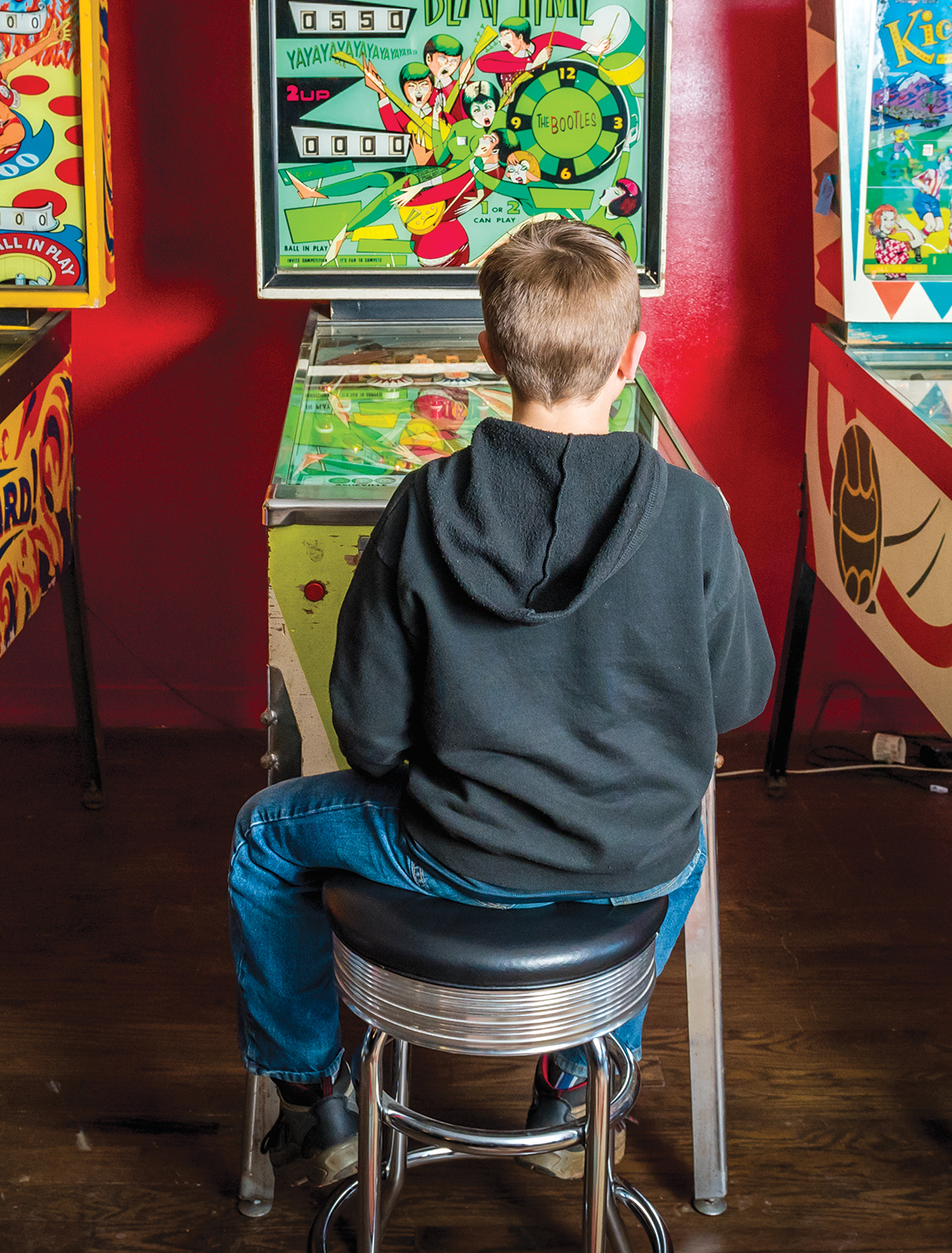 Among the bustle of downtown Asheville, there’s a place where people can escape to a simpler time — a time when video games had only joysticks and coin slots, music videos lived exclusively on MTV, and Darth Vader was the most ominous villain around. At the Asheville Pinball Museum, visitors get a chance to dive into the world of video games, arcades, and media from past decades. Star Wars spaceships dangle above eager pinball players in one room, commercials from the ’70s play on a loop next door, and ’80s music videos illuminate yet another corner of the museum. Owner T.C. Di Bella spent years building his nostalgia-filled collection, and he’s found that it’s not just the people who grew up with these games that marvel at the space. “That is the beauty of it. We have visitors as young as 3 years old, all the way up to 70-year-olds and everything in between,” he says. “It’s so cool to see the parents or even grandparents show their kids how to play pinball.” — Katie Kane 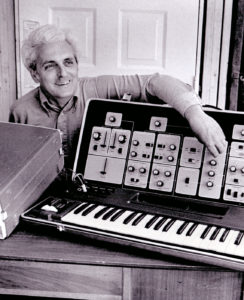 In 1972, six years before Robert Moog moved from western New York to western North Carolina, the electronic-instrument maker taught a weeklong workshop for children in the Clay County community of Brasstown. Under Moog’s guidance, the kids built rudimentary synthesizers called “Brasstown Bangers.” One of those instruments is on display at the Moogseum, the Asheville museum that celebrates the ideas and eccentricities of one of the most important instrument makers in modern music history.
Unveiled in 1964, Moog’s synthesizer went on to electronically color the music of artists ranging from classical composer Wendy Carlos, whose Switched-On Bach won a Grammy in 1969, to rock and pop acts like The Beatles, Kraftwerk, and Donna Summer. Inside the 1,400-square-foot Moogseum, a timeline follows Moog and his synthesizer — now a staple in all genres of music — from the early years, when he built the prototype, to his later years living, working, and teaching in Asheville. That prototype sits in the museum alongside a replica of Moog’s workbench.

“A lot of people have a glorified idea of who Bob Moog was, as if his synthesizer descended from heaven into a pristine lab where he was wearing a white coat,” says Michelle Moog-Koussa, his daughter and the executive director of the Bob Moog Foundation. “His real life could not have been further from that: He had struggles, but most of all, he was insatiably curious and interested in teaching all kinds of people.”

And teach he did. Asheville may be best known for its traditional acoustic music, but Moog showed that the swirling, space-age sounds of his synthesizer could fit quite naturally against the mysterious backdrop of the Blue Ridge Mountains. — David Menconi 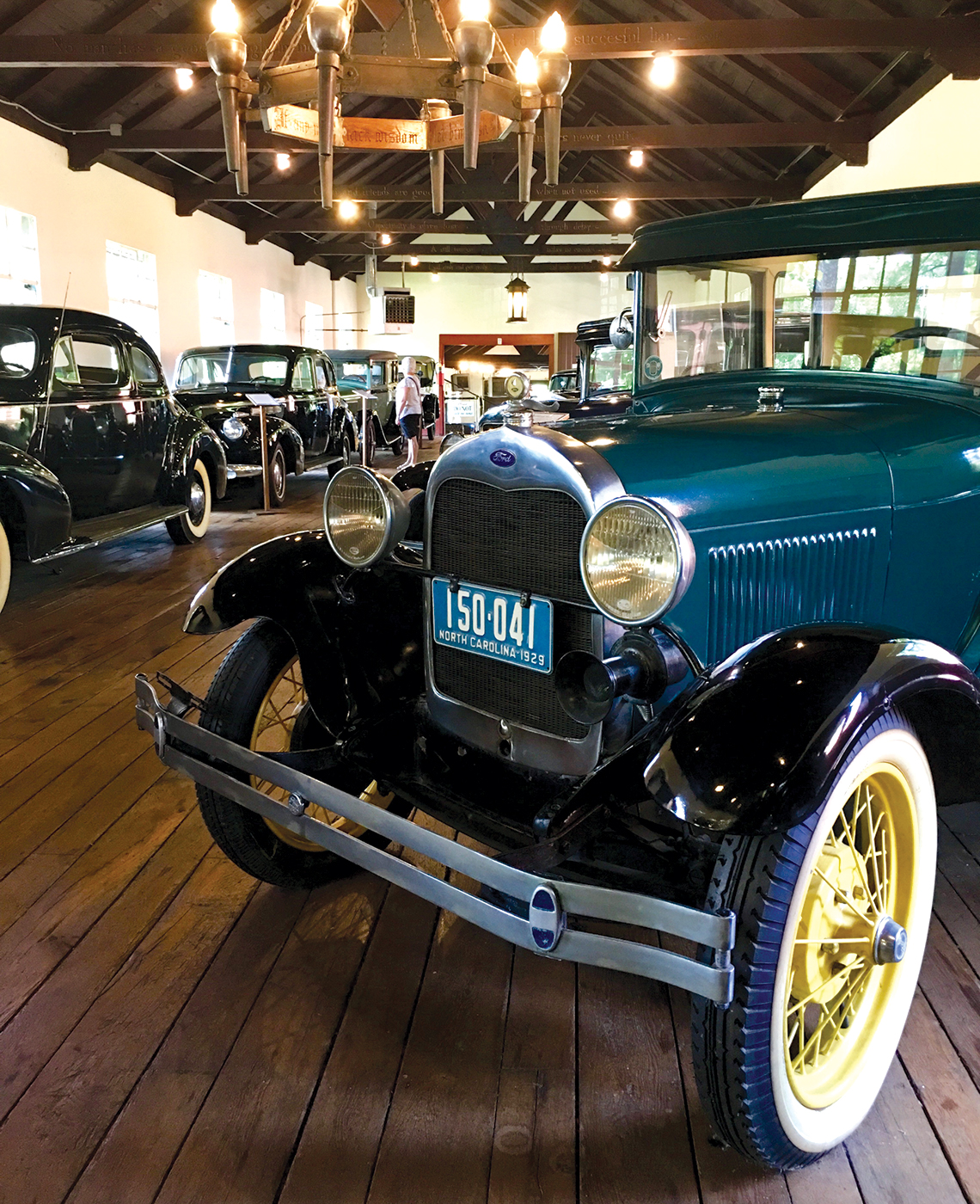 Originally built in 1923 as Biltmore Industries’ weaving shop, this quaint cottage was purchased in 1953 by car enthusiast Harry D. Blomberg. In 1923, Blomberg opened one of Asheville’s first filling stations and founded what would become the oldest family-owned car dealership in Asheville. Later, his famous Harry’s Motor Inn provided motorists with gas and auto service, as well as a covered place to park for the night. When the weaving shop’s previous owners could no longer keep the business afloat, Blomberg purchased it, determined to preserve this historic part of Asheville. When the company downsized, Blomberg filled the weaving shed with his treasured automobile collection and opened the museum to the public in 1966. The cottage is now home to vehicles like the coveted 1957 Cadillac Eldorado Brougham, a bright red American LaFrance fire truck that has been in Asheville since 1922, and even horse-drawn carriages. — Katie Kane

Josef and Anni Albers didn’t know a word of English when they fled Hitler’s Germany and crossed the Atlantic Ocean for North Carolina in 1933. Their destination: Black Mountain College, an experimental school with a short life and a long legacy. Josef became the first art teacher, while Anni taught a new generation of textile weavers. During the college’s 24 years, professors and students broke down hierarchies, toiling shoulder-to-shoulder on the creation of art and the cultivation of land at a secluded campus in Buncombe County. Six decades after the school opened, Mary Holden founded a museum to preserve and promote the program’s revolutionary spirit. At the renovated 1920s building in downtown Asheville, visitors can step into a gallery lined with works by the likes of painter Robert Rauschenberg and sculptor Ruth Asawa. The wooden loom from Anni’s workshop occupies a special place in the museum’s collection. — Claire Ruch

A giant in both his literary genius and his 6-foot-6 stature, Thomas Wolfe spent his boyhood surrounded by fascinating guests at his mother’s boardinghouse in Asheville. There, the author slept in whatever beds weren’t occupied and took mental notes on the characters that would later populate his first novel, Look Homeward, Angel. The thinly veiled autobiography, published in 1929, paints a colorful and scandalous portrait of Wolfe’s hometown. Today, his mother’s Victorian boardinghouse — with original stained-glass bay windows and, some would say, ghosts of its former inhabitants — is the centerpiece of the Thomas Wolfe Memorial. Historic Site Manager Tom Muir calls the 71-year-old museum a “front porch to the city.” Visitors can take guided tours of the rambling estate built in 1883, including 29 rooms showcasing authentic relics, from the hand-painted wooden bed where Wolfe’s mother gave birth to all eight of her children, to ink bottles tossed in the abandoned cistern by guests who valued the written word — much like Wolfe did. “No matter where he sat down to write,” Muir says, “his mind wandered home, and those are the memories he committed to paper.” — Claire Ruch

Long before streaming and podcasts, radio dominated the media landscape and paved the way for modern entertainment in North Carolina and beyond. Asheville’s Southern Appalachian Radio Museum has preserved more than a hundred vintage home and ham radios — and even a crank record player — for nearly 20 years. Each machine has a story to tell: From helping save lives on sinking ships to the early stages of messaging through Morse code, the radios found in this museum have played an integral role in many historic events. The goal of the museum, though, is to show how modern technological advances like GPS and even cell phones wouldn’t be possible without these pioneering radios. — Katie Kane

The new, modernized Asheville Art Museum serves as an anchor for creativity in this corner of our state, poised to bring far-reaching attention to western North Carolina’s past, present, and future artistic achievements. It’s a boon for the city that would not have been possible without enormous community support and visionary direction. Read more here. — Melissa Reardon