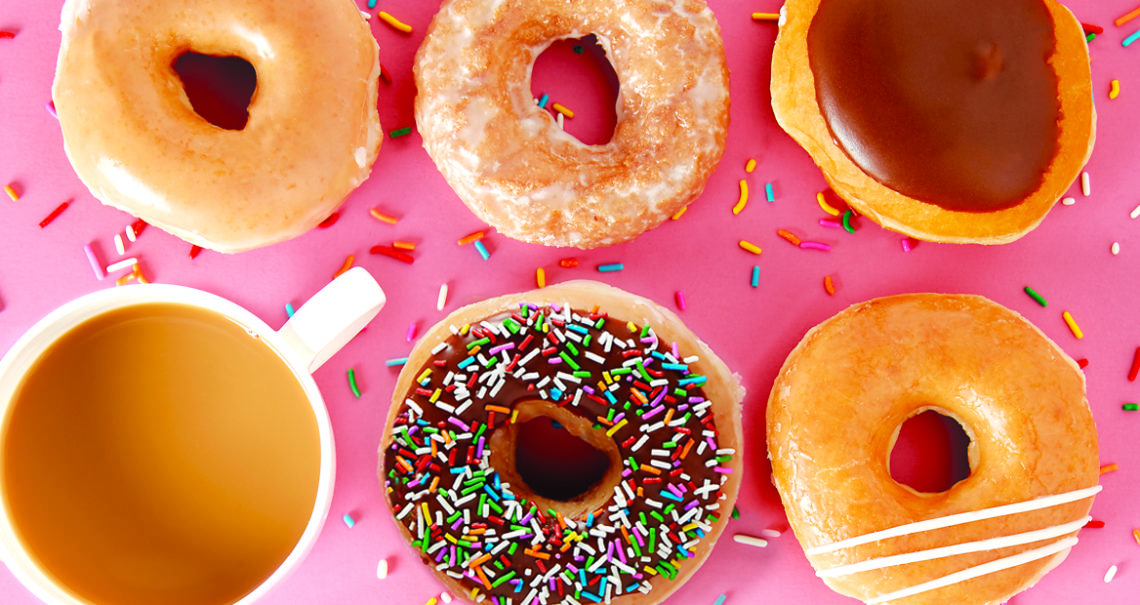 Winston-Salem // The story of doughnuts in North Carolina begins in 1937, when Vernon Rudolph opened up shop with a recipe purchased from a New Orleans chef. The rest came later: the paper hats, the “Hot Now” light, the goodwill for the person who picks up a dozen — of course they’ll share — in the iconic white-and-green box. You can imagine the thrill Rudolph must have felt when he took that first bite. You’ve felt it, too, many times over: the thin layer of sweet glaze giving way to the warm interior, just chewy enough to sink your teeth into. The sensation is unmistakable. And although it’s available around the globe now — of course we’ll share — we know there’s a taste of North Carolina in every bite. krispykreme.com 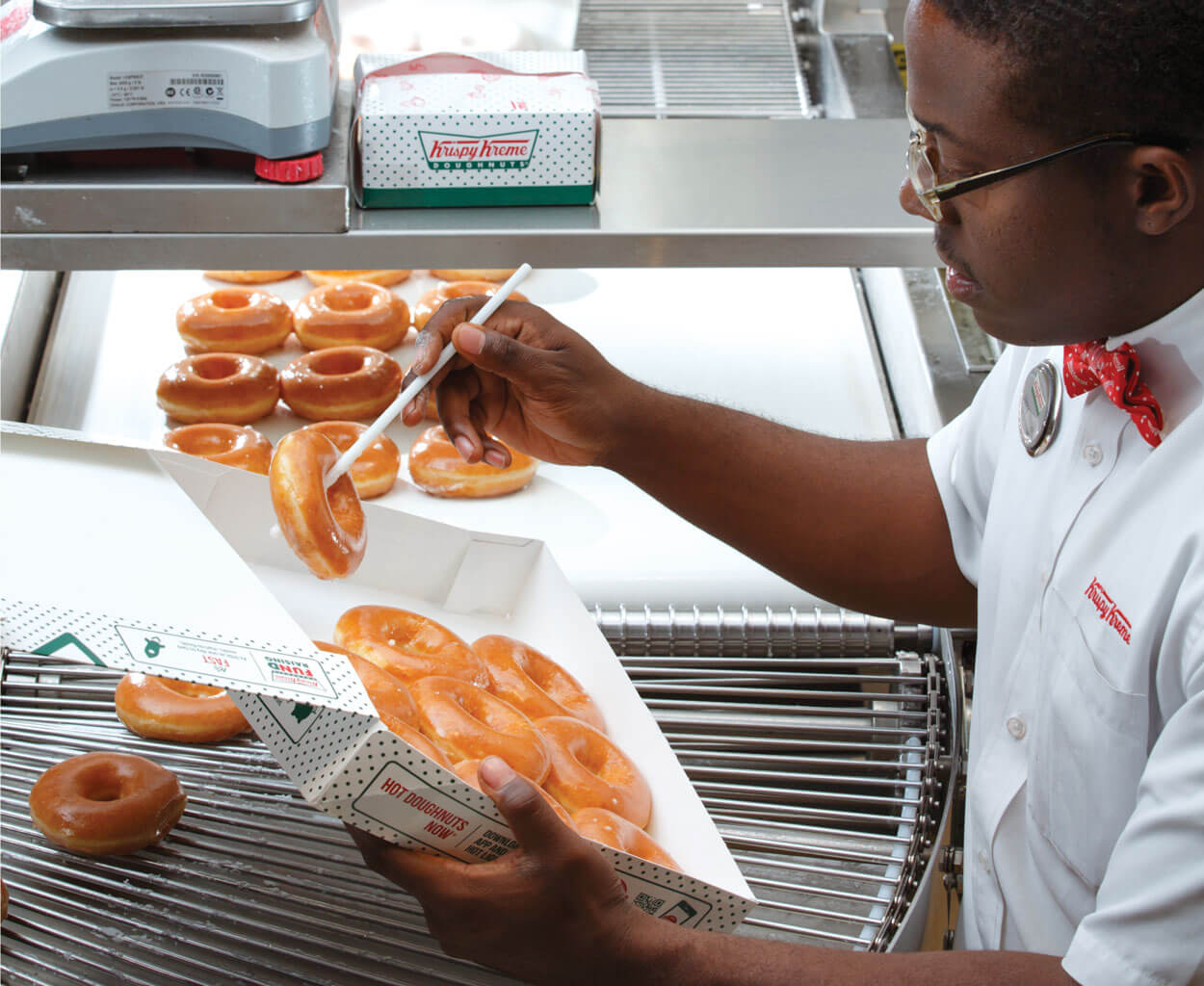 The doughnuts that roll off conveyor belts today got their start in a brick storefront in what’s now Old Salem. photograph by Jerry Wolford & Scott Muthersbaugh

Greensboro // “Espresso culture” had not yet arrived in North Carolina when Matt Russ opened a coffee shop on Tate Street, the tight-knit business district that hugs the eastern edge of UNC Greensboro’s campus. Russ’s new landlord was concerned. “How are you going to make a living selling coffee?” he asked. But Russ was inspired by a romantic notion of the Beat Generation and coffeehouses of the 1950s: As a student at UNCG, he’d often hung out in the cafeteria, sipping coffee and doing homework. In 1993, Tate Street Coffee House opened in the space that had been the Friar’s Cellar, a gourmet convenience store. “What I liked about Friar’s and wanted to bring to Tate Street Coffee was that the students and professors would hang out there, but also artists and lawyers,” Russ says. “This is a window between the university and the town.” 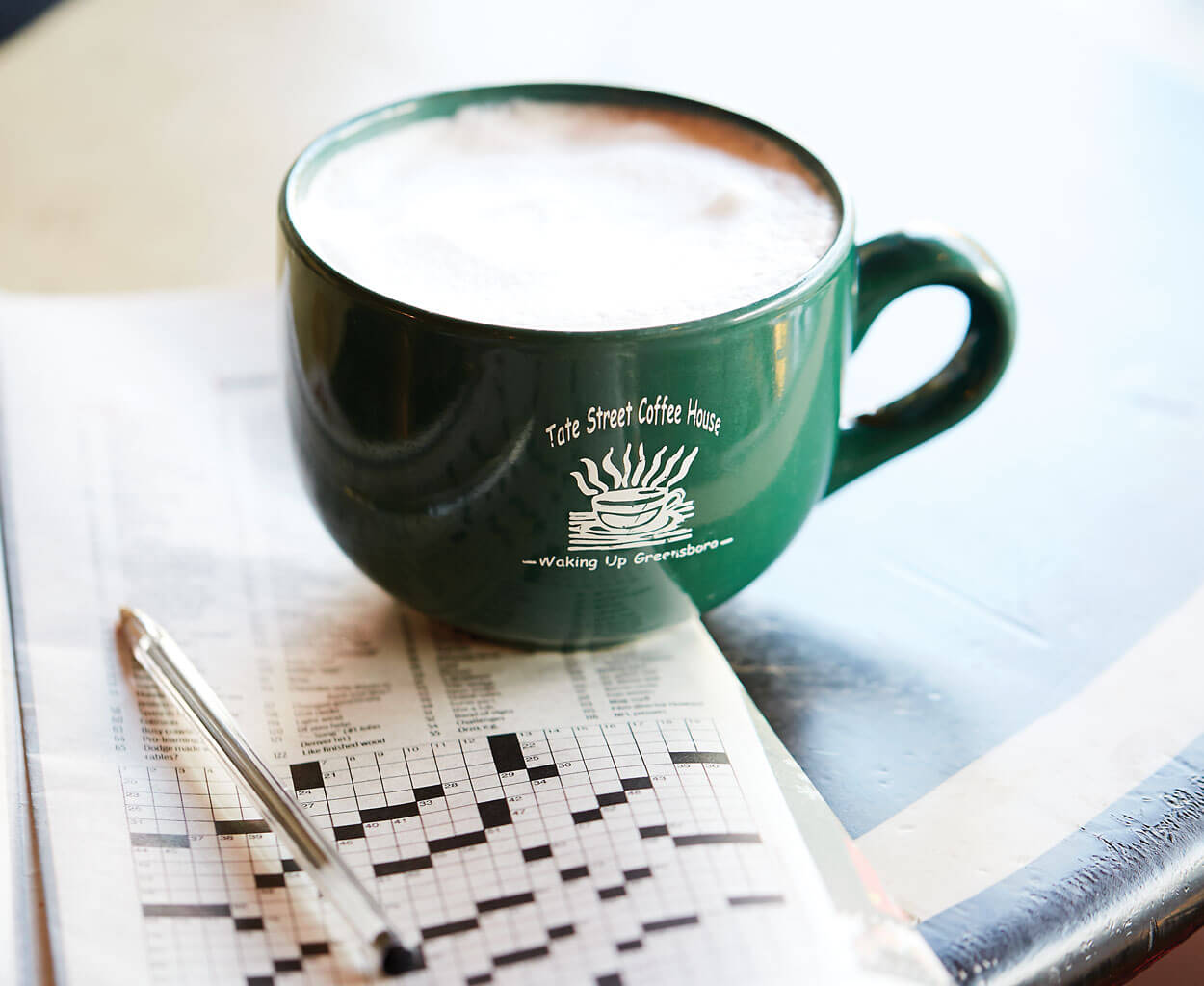 Much of Tate Street’s core menu has remained the same since the 1990s, including the best-selling Black & Tan — a latte flavored with chocolate, caramel, and vanilla. photograph by Stacey Van Berkel

Tate Street’s warmth and familiarity have made it a cultural institution in Greensboro. Early on, Russ organized an annual coffee-themed community art show — still going strong — that has produced some of the shop’s most memorable decor. And for students and professors in the music department at UNCG, Tate Street’s Thursday night jazz jam is “almost like a lab,” says manager Austin Jeffries: an opportunity to play to a packed, lively house. For students, alumni, and townies alike, those long-standing traditions are a comfort.

Concord  //  Mugs around the country stay full thanks to a North Carolina tradition that goes back to 1927, when Roy Davis Sr. and Lawrence Switzer founded S&D Coffee. Later, the company began supplying restaurants, then national chains and convenience stores. President and CEO Ron Hinson, who got his start on an S&D sales and delivery route in the 1970s, has overseen the company’s growth into one of the largest coffee and tea manufacturers in the country. In Cabarrus County, the local legacy is in the very air: Outside S&D’s facilities, it smells like coffee. sdcoffeetea.com 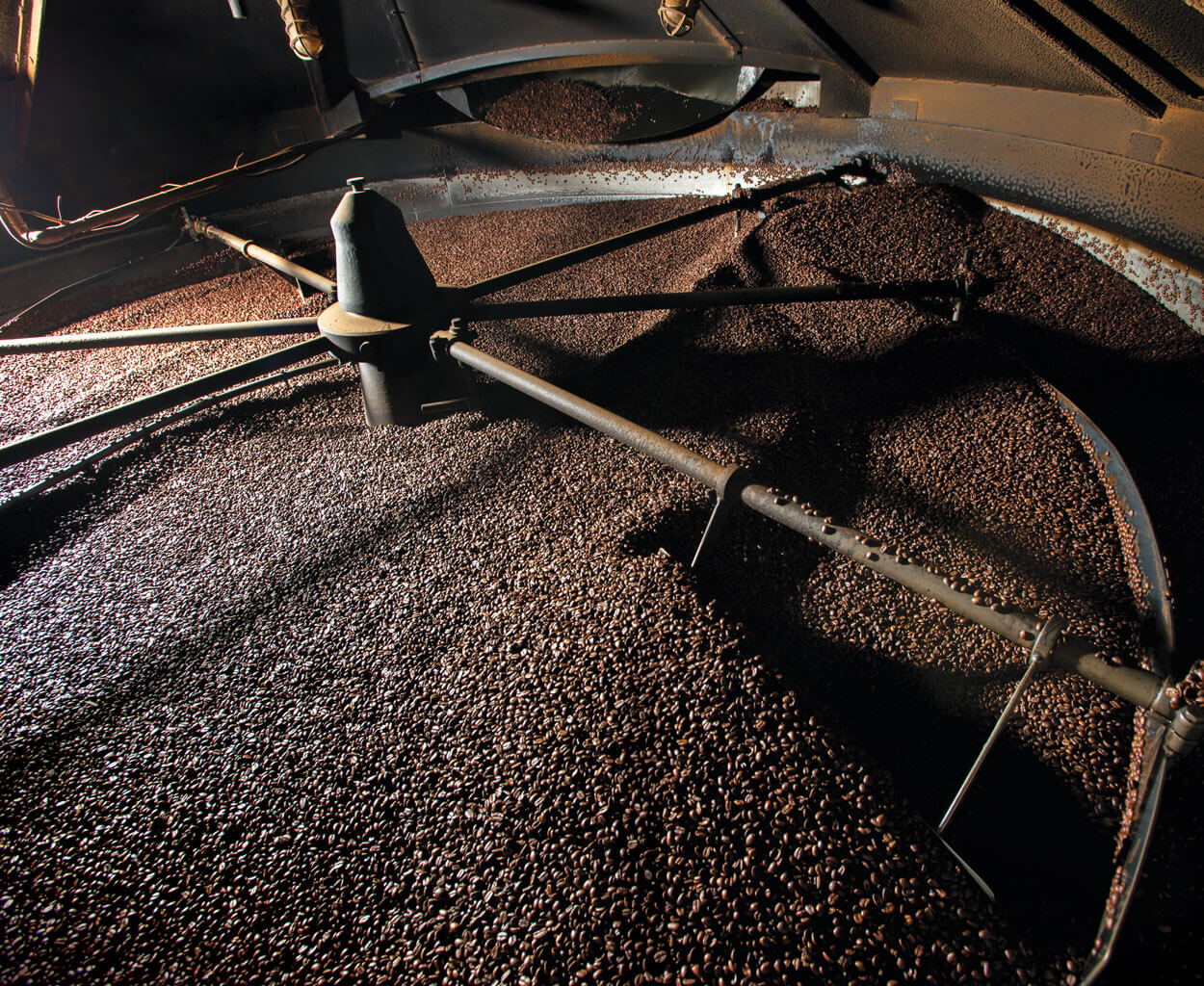 As the company has grown, its service and delivery fleet has expanded from a handful of vehicles to hundreds today. photograph by Stacey Van Berkel

Boone // Meredith and Josiah Davis had always dreamed of owning a coffee shop, ever since they met as students at Appalachian State University. The opportunity to add doughnuts was a sweet surprise: While at a bakery in Roan Mountain, Tennessee, the Davises discovered that the owner was selling his doughnut-making equipment. They bought it on the spot, then trained with the baker for three months before opening their own shop in 2012. The Davises see Local Lion as more than a doughnut shop and coffee roaster. It’s a supportive “base camp” for the community, which inspired its slogan: “Conquer your mountain.” 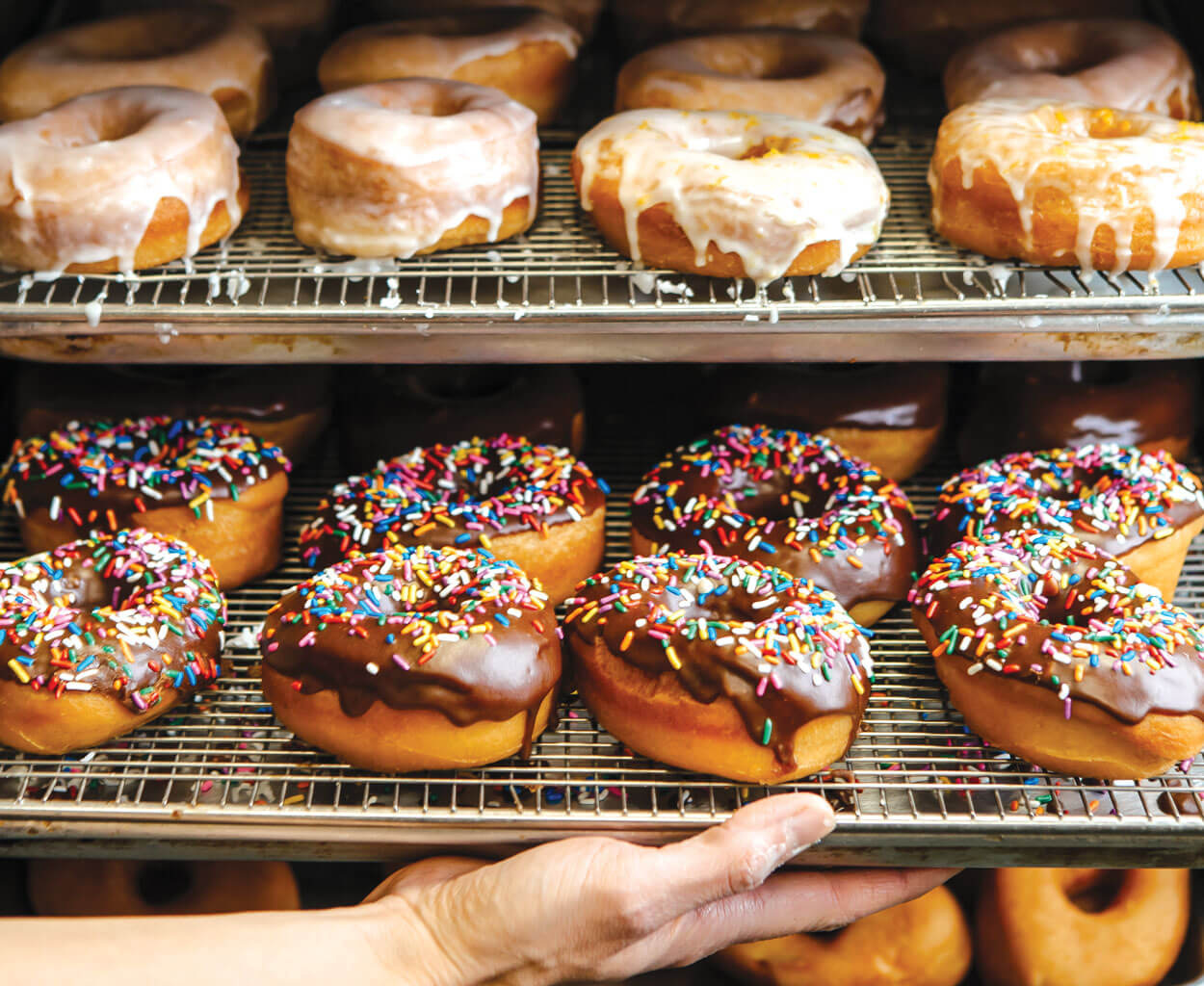 Wilmington // When Port City Java opened in 1995, Steve Schnitzler was the executive chef at Front Street Brewery next door, and he’d stop by for coffee almost daily. He soon joined the company, and now, as CEO, he’s helped oversee PCJ’s expansion to 26 locations in North and South Carolina. Each café has its own personality, but they all have at least one thing in common: Every cup of coffee is made with beans roasted by local folks in Wilmington. And the Front Street shop, now two doors down from the original, remains PCJ’s flagship location, embodying the lively, historic spirit of downtown Wilmington. After 25 years in the area, many longtime customers say they grew up with the café, says Marketing Coordinator Amber Fowler. “We have a lot of pride in our tenure here in this town.” portcityjava.com 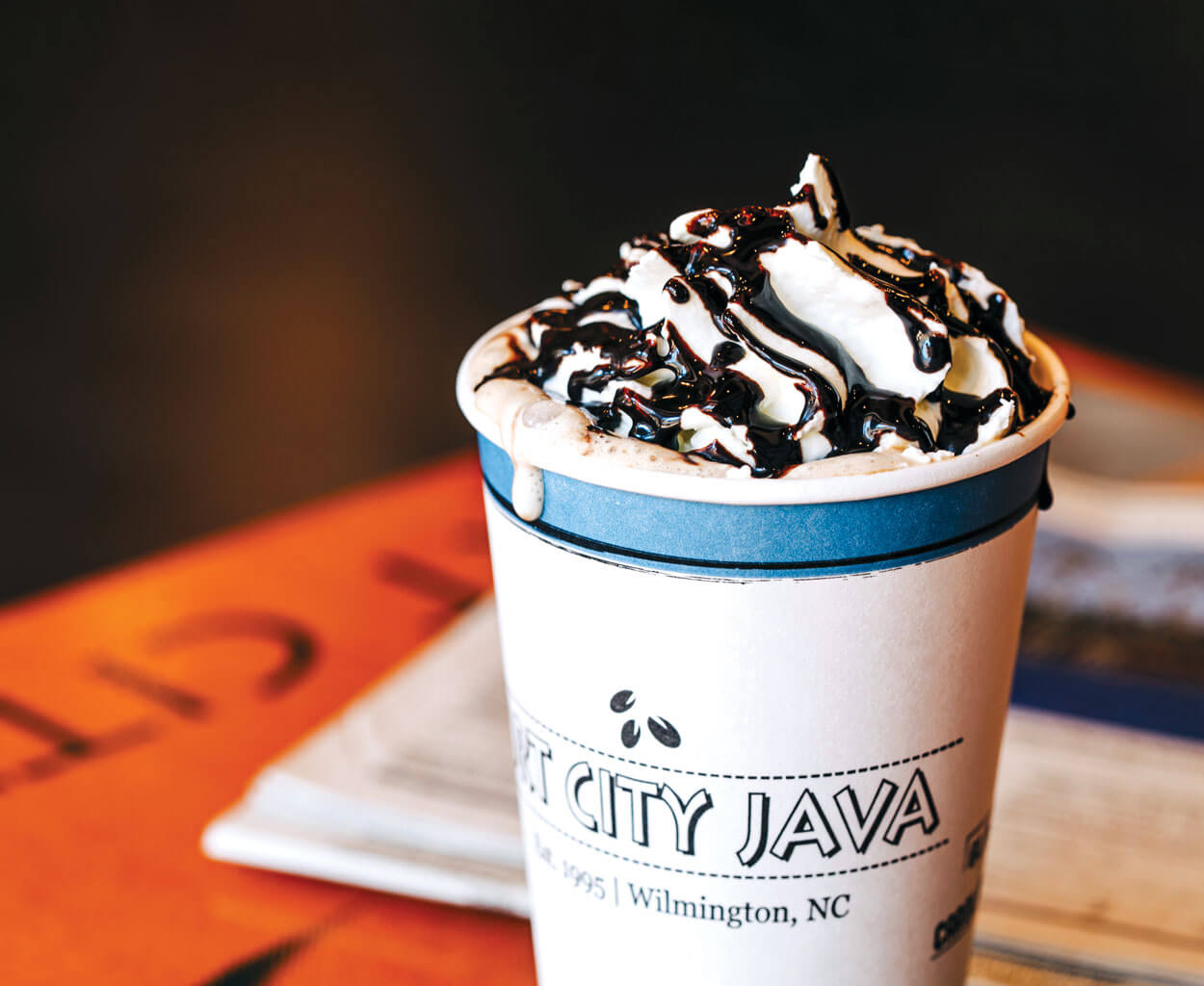 One of the most popular drinks at the cozy café at 21-A North Front Street is the Mochaccino, a latte made with Ghirardelli chocolate and topped with whipped cream. photograph by Matt Ray Photography

Asheville // The month Hole opened in 2014, Hallee Hirsh and Ryan Martin discovered Asheville and fell in love with the city. They were visiting from Los Angeles, searching for a place to raise their growing family closer to the earth. Meanwhile, at Hole, founder Caroline Whatley kept things simple, offering only four doughnut flavors a day and forming the dough by hand so that each was charmingly different. Her bourbon-molasses glazed doughnut soon earned national attention — but by then, Whatley was ready for a new adventure. Hirsh and Martin were delighted to pick up where she left off, keeping the community in coffee and doughnuts: a perfect circle. 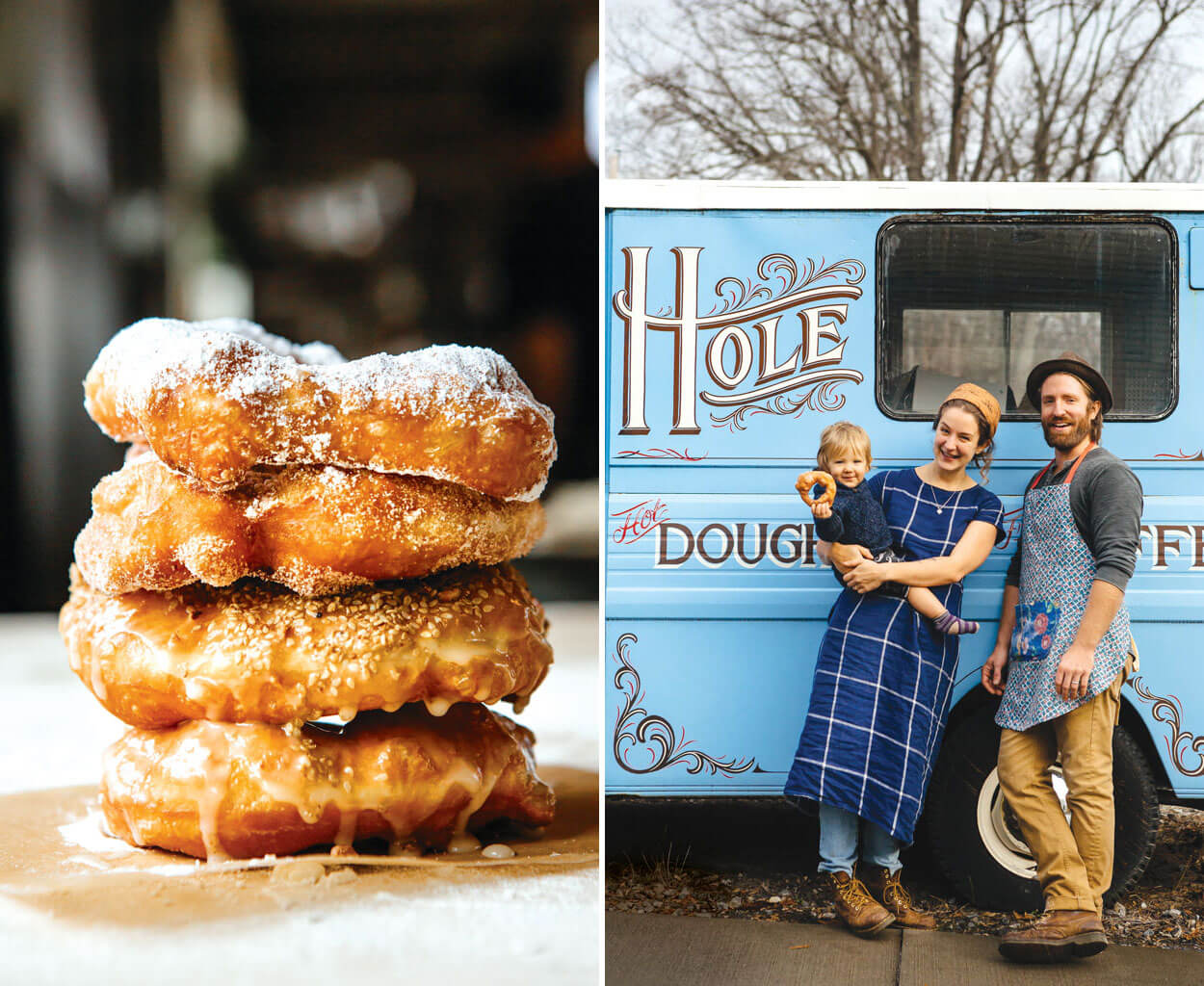 For Hirsh and Martin, who are eager to be close to the source of their food, it was important to preserve Whatley’s vision of simplicity and transparency. To that they added their own passion for foraged ingredients that come and go with the seasons, like honeysuckle and wild blueberries. “Seasonality is such a celebration of time and place,” Hirsh says. “I love that we’re able to bring that to our doughnuts.” The couple had worked as actors in LA; at Hole, they’ve found that making food in front of their customers is “the ultimate performance,” Hirsh says. “It’s like doughnut theater.”

Durham // From the earliest days, when Counter Culture was a fledgling roaster in the mid-’90s, employees would gather every Friday morning to take a coffee break together. As the company grew, it maintained an eagerness to share information and excitement about coffee, and later opened the Friday tradition to the public as “Tasting at Ten.” Held at Counter Culture’s training centers across the country, the “cuppings” help coffee drinkers outside the industry learn how to smell and taste different blends like professionals, identifying new flavors in the beverage they enjoy every morning. counterculturecoffee.com 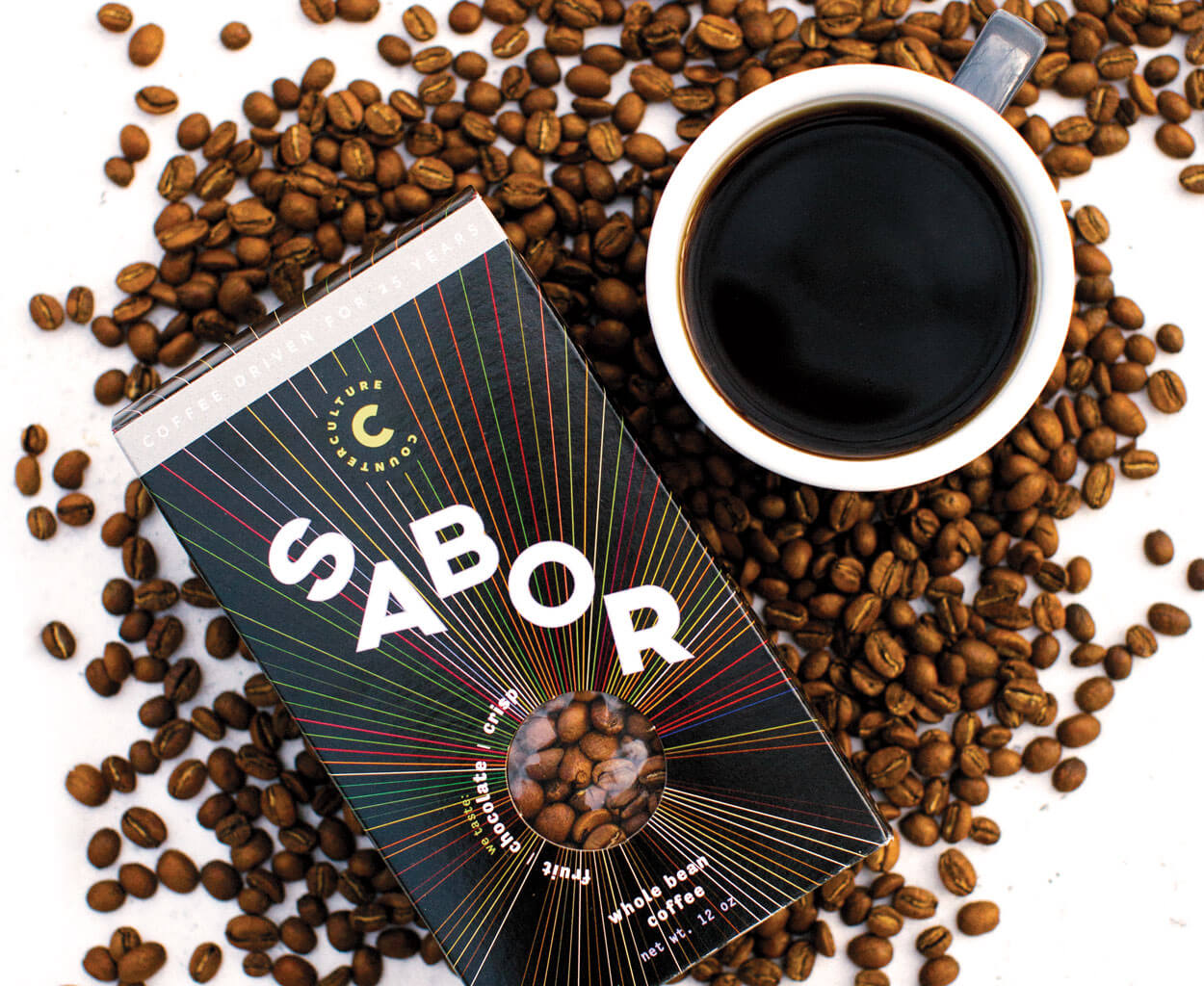 It can be hard to identify the flavors in a beverage as complex as coffee, but Counter Culture employees love to help people try. The limited-edition Sabor — Spanish for “flavor” — celebrates their passion. photograph by Anagram Photo

Black Mountain // A customer once told Amy Vermillion Carroll that if Black Mountain is the “front porch” of the Blue Ridge, then her coffee shop is the living room just beyond that front porch. When Carroll opened The Dripolator in 1999, she had no doubt that her coffee shop would attract high school and college students, but it was important to her that customers of all ages felt welcome. So she borrowed a name from an old-fashioned type of coffeemaker, one that folks who grew up in the 1950s and ’60s would recognize. She put up shelves to display favorite selections from her collection of vintage dripolators, and she often hears people say, “This is how we made coffee growing up,” or, “My mom had one of those!” And she says the shop is just as inclusive and welcoming as she’d hoped: “It really is kind of a melting pot.” 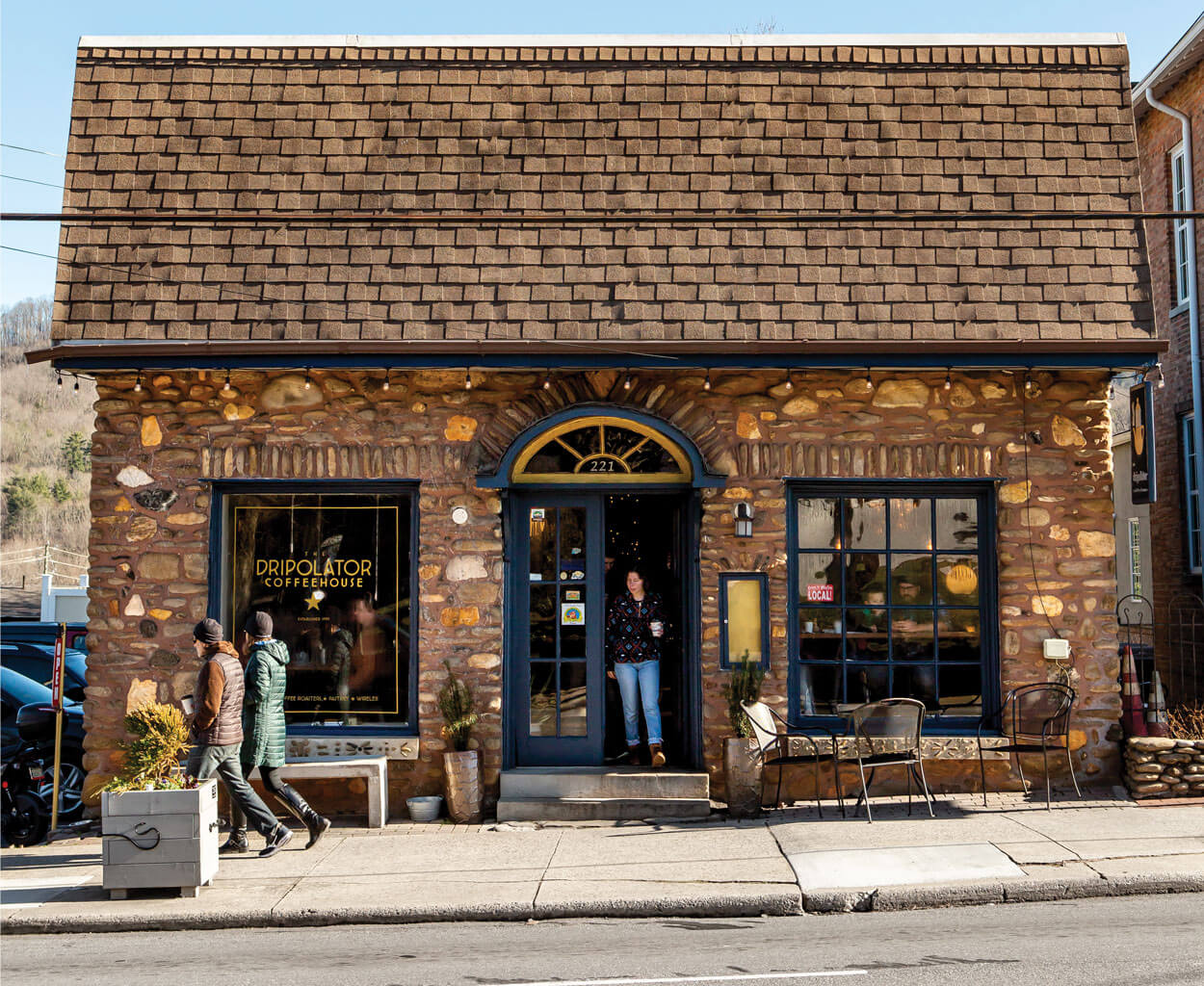 We recommend ordering the house-roasted coffee or one of the specialty drinks like the Golden Milk latte, made with turmeric, ginger, cinnamon, black pepper, and honey. photograph by Tim Robison

Carolina Beach // There is a doughnut on the Carolina Beach Boardwalk that defines the taste of summer. It doesn’t have sprinkles or frosting or filling. Doesn’t need ’em. The glazed doughnut that Harvey Britt created in 1939 has never gone out of style — his secret recipe is the one Bobby and Maxine Nivens, the owners for more than 45 years, still use today. From late March through early September, carry the paper bag of golden treasure to the boardwalk swings that look out onto the beach. Watch the waves hit the sand — a view as perfect as each delicate doughnut — and savor this moment before it melts away like candied air. 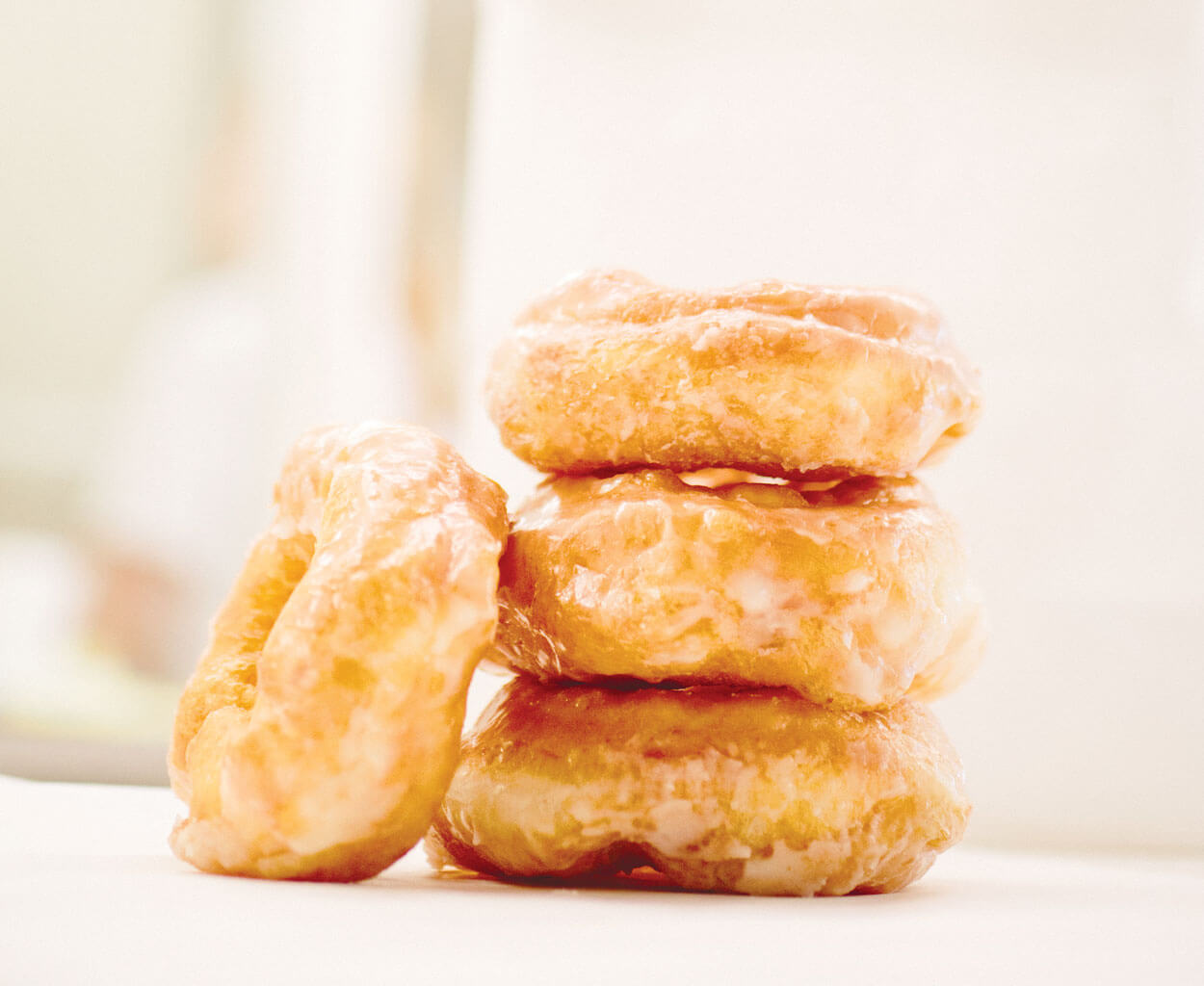 After more than 80 years, Britts has built a devoted base of fans who don’t mind standing in line. They know the doughnuts are well worth the wait. photograph by Millie Holloman Photography