On what would be their last Thanksgiving together before the family’s calamities, a giddy little boy named Mark clung to his elegant mother’s hand as they ambled through downtown Lumberton. They were on their way to pick out a Christmas gift, though Mark didn’t know it at the time. Nor did he or his mother have any reason to suspect they’d soon be separated.

The year was 1951, and the town — flush with tobacco and textile money — teemed with shoppers. The two strolled past the stately white-columned mansion of former Gov. Angus McLean and the red brick Lorraine Hotel, swarming with guests checking in for the holiday. They were instantly recognizable, this pair, and townsfolk smiled and waved. Mark’s mother, Susan Welsh, never left the family’s striking modernist home wearing anything but the latest fashions featured in Vogue. Her 4-year-old son adored her. Their promenade ended at Harold’s Music Shop, the regional destination for families looking to round out their picture-perfect American Dream with a piano.

Mark’s family had already achieved The Dream — at least as it was defined in the early ’50s. His hard-driving, thickset father, Edd, owned a thriving General Electric franchise a block away from Harold’s. Edd fully expected that his son would grow up to take over the enterprise. Mark’s maternal grandparents — Superior Court Judge Everett Johnson Britt and his wife, Hesbath, known as Hesba — lived next to his mom and dad’s house in a 13-bedroom mansion of 19th-century pedigree. 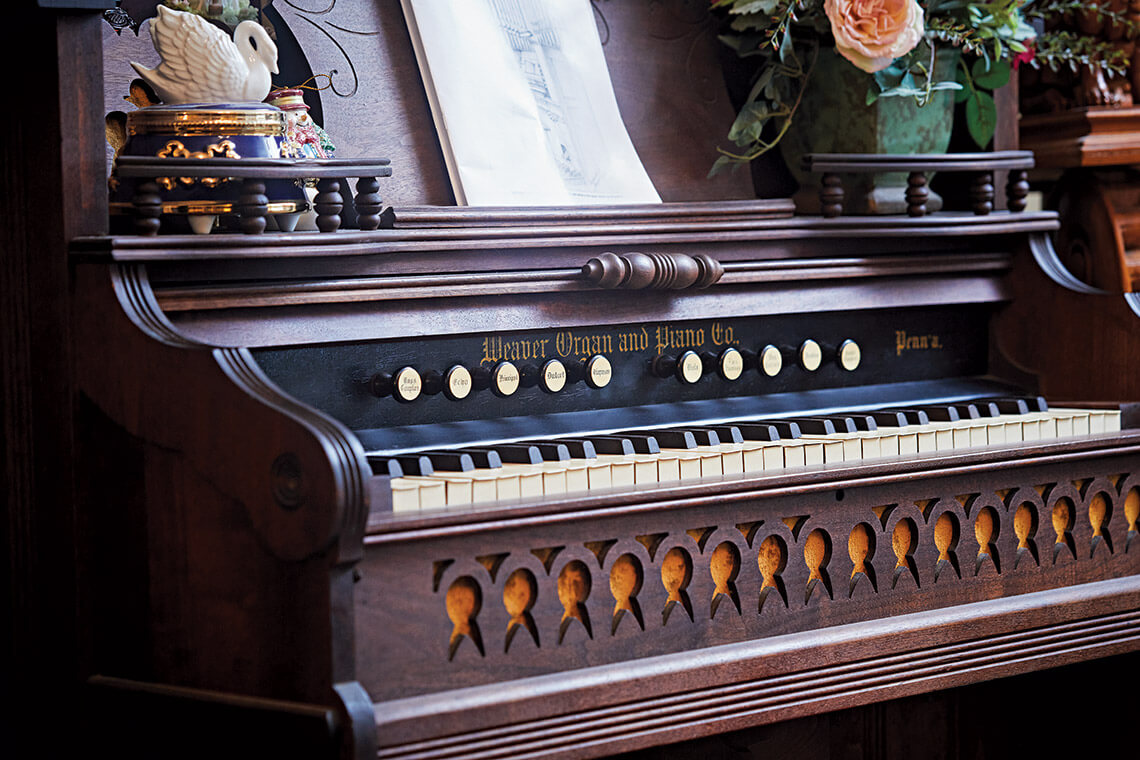 The parlor organ in Andersen’s living room once stood in the home of his grandfather, Judge E.J. Britt. Built by the Weaver Organ & Piano Company in 1892, it was the first organ that Andersen played as a child. photograph by Alex Boerner

Inside the music store, redolent with scents of furniture polish and freshly printed sheet music, Susan selected a handful of pianos in the French provincial style and invited Mark to test them. The boy was a prodigy, having received his first lesson at age 3 from Hesba. Susan chose a piano of distressed cherrywood and, unbeknownst to Mark, arranged to purchase it. The piano arrived at the family home after the boy had slipped to sleep on Christmas Eve.

“Mark,” his mother cooed to him on Christmas morning, “Santa left something for you.”

As Mark tells the story — the Mark of today, a burly and bearded 74-year-old sitting in the house where he grew up — he suddenly stops. A small sob escapes him. “I’m sorry,” he says. “This is still rough for me.”

The piano that the music-store Santa delivered that Christmas set in motion a remarkable career that would take Mark to performances at Carnegie Hall in New York City, to London and Paris, and across the U.S. and North Carolina, including concerts this season at Lumberton’s Carolina Civic Center and Greensboro’s Carolina Theatre. But the instrument would also be an emotional lifeline for a little boy torn from his mother, and the beginning of a dream very different from that of his father.

In the living room, at the bottom of the stairs, just a few steps from the front door — a prominent position in an unmistakable home — Mark’s family made a place for the new piano. More than a decade earlier, Susan — tall, slender, and a dead ringer for the young Elizabeth Taylor — had traveled by train to the Chicago studio of Frank Lloyd Wright, where she commissioned one of the master’s associates to design this house. Its sleek white angles stood out in Lumberton — a projection, it seemed, of the charmed lives led by the family who inhabited it.

Indeed, that Christmas, the family expected to be blessed with another gift: Susan was pregnant. Young Mark hadn’t taken much note. He was busy scampering between two sets of piano lessons, one from “Mama” Hesba and another from the organist at the nearby First Baptist Church. But as winter warmed into spring, Mark noticed his once-vigorous mother gasping for air. Then, in early March, Edd, who was 30 years his wife’s senior, rushed her to the hospital, where she delivered another boy. Three days later, back at their home, Mark’s infant brother died in his sleep. The family had little time to mourn. During Susan’s difficult pregnancy, alarmed doctors had drawn blood. Now, the test results were in. A killer disease that had long terrorized the country was ravaging Susan’s lungs: tuberculosis. 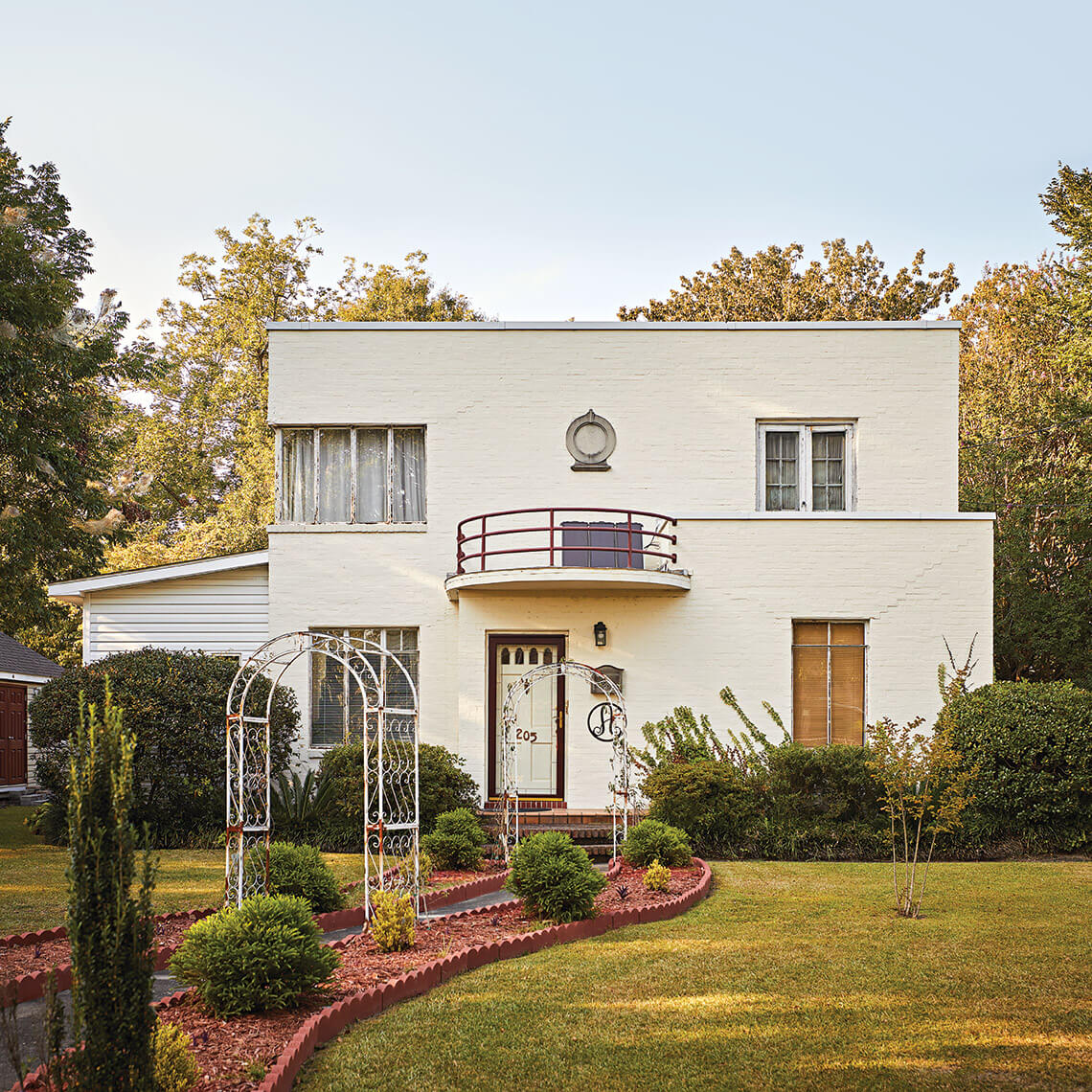 In 1942, Edd and Susan Welsh commissioned Frank Lloyd Wright’s studio to design one of the more noteworthy homes in mid-20th-century Lumberton. photograph by Alex Boerner

As bright blue, pink, and purple hydrangeas bloomed throughout their yard, Edd helped Susan pack a suitcase and whisked her to a live-in sanatorium in Southern Pines. Mark was at his grandparents’ mansion next door. He returned home to find his mother gone and his world transformed. “The family had been so elated, anticipating the birth of a new baby,” Mark remembers. “Then, all of this happened, and the family became very stressed.”

Mark’s father, a serious man who grew up working family farms, stewed in the stress. “He was born in the late 1800s and carried a lot of the old ways,” Mark says. “Emotions were things he never displayed.” Still, every day after Edd finished work, he would drive to visit his wife — “not knowing for sure,” Mark says, “if she would still be alive.”

Though summer had come, Mark’s house was now a cold place. More than ever, the piano he had picked out with his mother beckoned him. He practiced at every possible moment, until his increasingly remote father forbade it when he was at home. Undaunted, Mark ensconced himself in front of Mama Hesba’s piano next door. “She liked French love songs,” Mark says, and smiles. “Especially ‘Alice Blue Gown.’ Grandfather was fond of World War I infantry tunes. And Handel’s Messiah.”

As the evening news chronicled the American- Soviet rivalry of the ’50s, an emotional cold war settled in between Edd and Mark. The father urged the son to play sports, to learn how the rough-and-tumble world really worked. The boy wanted to play music — and to feel the connection it provided to his much-missed mother. More than a year passed. Then, with another Christmas approaching, Mark received an early gift.

Enfeebled by surgery that removed two-thirds of a lung, Susan returned home in the fall of 1953. “That she survived,” Mark says, “was a miracle.” The 6-year-old was overjoyed, but also distressed. Far from being her vivacious former self, Mark’s mother was bedridden. He noticed that her bed on the second floor was directly above the living-room piano, so he threw himself into playing for her. “She wanted to hear the old church hymns,” Mark remembers. “Particularly ‘In the Garden.’”

By Christmas 1954, Susan was well enough to engage in the season’s festivities. Mark, basking in the glow of both the plump multicolored lights on the tree and his mother’s smile, celebrated by penning his first original composition, “On a Christmas Night,” which he performs to this day. During his mother’s nearly two-year absence, the boy had blossomed into a virtuoso. When he won a competitive opportunity to perform with the North Carolina Symphony at Raleigh Memorial Auditorium, Susan rallied her strength to attend. Edd stayed home. 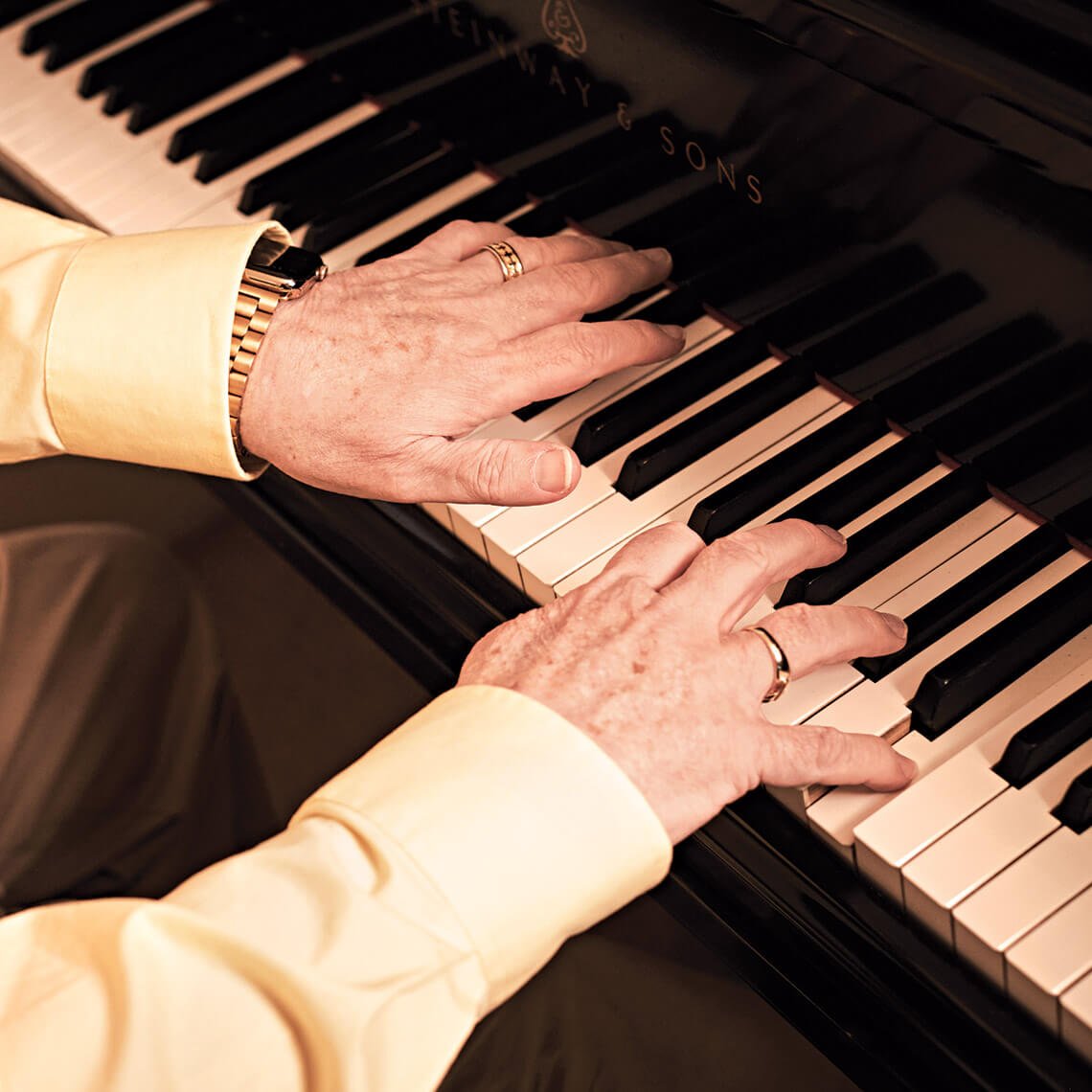 Andersen’s Steinway Style D piano was originally made for the 1962 World’s Fair. photograph by Alex Boerner

So it went between the boy and his father. After graduating from East Carolina University years later, Mark shared his wish to attend a conservatory. Edd refused to help pay for it. Mark earned a full scholarship to the American Conservatory of Music in Chicago and went anyway. He then crossed the ocean to study at the Conservatoire de Paris and eventually looped around to New York City to work for NBC, arranging music for everything from commercials to Andy Williams Christmas specials to sparkling productions at Radio City Music Hall.

But wherever he went, whatever he did, Mark couldn’t escape the specter of his father deriding it all as foolishness. He eventually dropped Edd’s surname, becoming just Mark Andersen. In 1976, Carnegie Hall invited him to perform. Susan made the trip with, for the first time, Edd. Mark, surprised to see him, still felt the familiar chill in his father’s demeanor. “How much are you being paid tonight?” Edd asked stiffly. When Mark answered $2,300, the energy changed. His father took a beat, then marveled, “I can’t even think about how many years it took me to make that much money.” 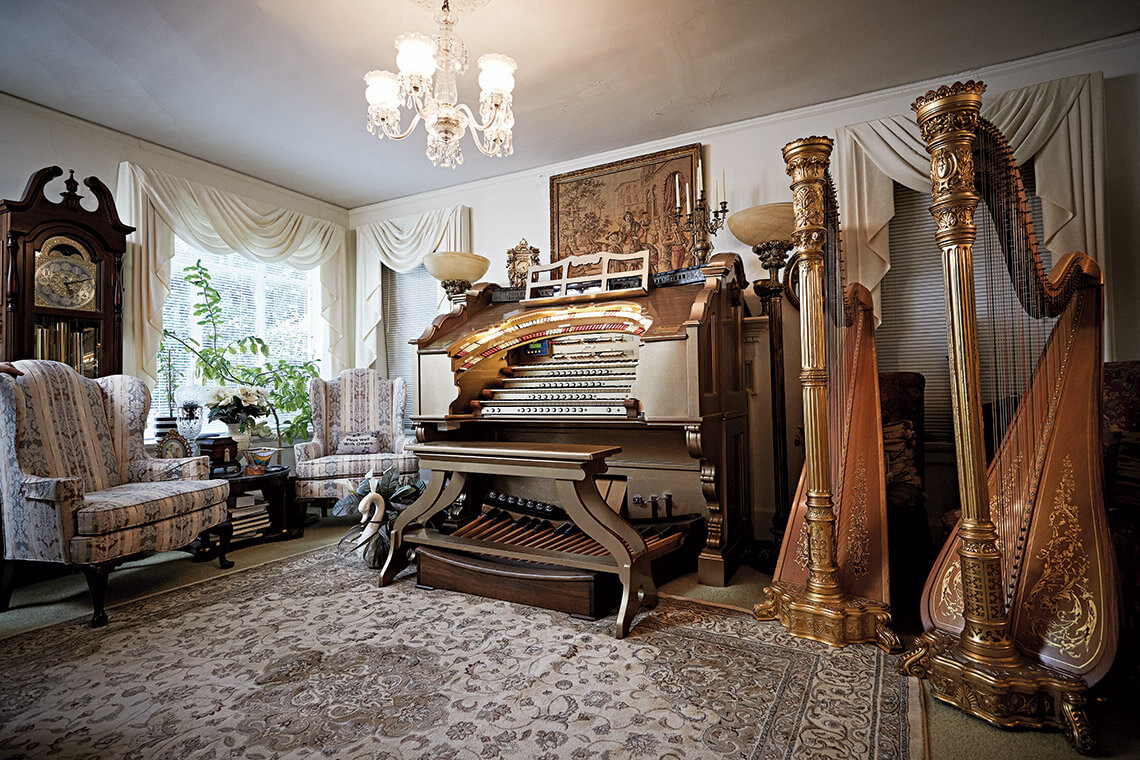 His Wurlitzer pipe organ is a replica of the famed “Fox Special” installed at the majestic Fox Theatre in Brooklyn, New York, in the 1920s. photograph by Alex Boerner

Square-jawed, traditional Edd — the husband who’d watched his wife very nearly wither away, the father who’d buried his infant child — had all along fretted that a career in music would leave his son without means, exposed and vulnerable to the world’s cruelties. Now, witnessing that career flourish, he relented. “I was wrong,” he told Mark. “You are where you’re supposed to be.”

The glacial relationship thawed. Father and son grew closer until Edd died in 1995. Susan remained Mark’s most ardent supporter until she passed in 2013. Two years later, Mark left his post as artist in residence at Daniels Recital Hall in Seattle to return to North Carolina. In his semiretirement, he took to restoring old Wurlitzer organs, serving as dean of the Central NC chapter of the American Guild of Organists, and regularly performing.

Today, Mark Andersen lives in the same home where he grew up, but much has changed in Lumberton. His grandparents’ next-door mansion is now a parking lot. Harold’s Music Shop is long gone. And the fateful cherrywood Christmas piano is no longer in the living room. Mark donated it to First Baptist Church.

On a sunny Saturday, Mark lets himself into the “ladies’ parlor” in the back of the church, sits down at the piano, and hits a couple of notes. “Needs tuning,” he says with a frown. Then he plays some more, this time allowing his hands to leap over the keys in the joyous style of Mama Hesba.

For a moment, Mark is confused. “Oh, that?” he says, and laughs. “That’s something I made up just now.” Then he continues, gloriously.

Worshipers at First Baptist Church believe that the birth at the heart of Christmas holds the possibility of salvation throughout the ages. Perhaps certain Christmas gifts are a little like that, too. They have their moment — Christmas morning of a certain year in such-and-such place — but their magic, their power to transform, endures.

They can be, in other words, vessels of grace.