“They talk of Christmas so long, that it comes,” the poet George Herbert wrote four centuries ago. And if you’re a child, that’s about how long it takes for Christmas morning to arrive. When that tummy buzz of anticipation, that simmering sizzle of excitement that’s been teased and tamped down and cautioned (“Have you been a good boy?” “Would Santa be happy about that?”) for weeks on end finally erupts into full-blown delirium. Put another way, when the dark, still, peaceful, silent night of Christmas Eve becomes, in a matter of hours, the complete chaos of Christmas morning.

If you’re reading this, you’re probably past that giddy glee of scrambling from bed to see what Santa Claus brought. Past — oh, the childhood cruelty! — having to wait at the top of the stairs or around the hall until an adult goes down, turns on the lights, turns on the Christmas music, lights the fire, starts the coffee, and calls out, “I think Santa came after all,” releasing your bed-headed self to race for the living room, or the fireplace, or the Christmas tree. It’s hard to know what to exclaim over first: the cookie with the neat half-moon bitten into its side, the half-full glass of milk left by a hurried Santa, the tracks across the rug left by Santa’s floury — I mean snowy — boots. Or the presents, wrapped and stacked, that admittedly have become a bit worse for wear from furtive prodding and poking and squeezing and peeking.

The Christmas morning traditions begun in childhood — Dad handing out the gifts one by one; cocoa and a peppermint-stick stirrer in a Santa Claus mug — last far longer than any gift. Every Christmas morning, I laboriously squeeze fresh orange juice for everyone. Why? These days, fresh orange juice can be purchased at any grocery store. It’s because my mother did, crushing orange halves in the tall, silver, long-handled juicer. For the same reason, knobby whole walnuts fill the toes of the stockings dangling from my mantel — because walnuts were in my stocking every Christmas when I was a child. 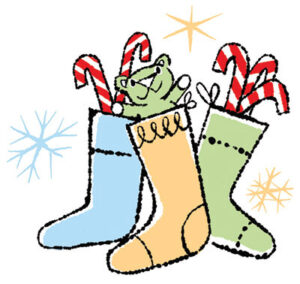 Perhaps the very gift itself made Christmas morn a memory. The year my husband gave me a live daphne shrub, complete with burlap-bound root ball. The Christmas after my son’s college graduation — the one he still calls his “old man Christmas” — when his presents were all practical: a khaki raincoat, a cast-iron skillet. When I was 10, the gift I saved for and ordered from the Miles Kimball catalog for my grandfather: an eraser the size of my forearm with I never make big misteaks printed on its rubbery pink surface. Everyone knows the delight of lifting the flap of a slender envelope with the oval cutout smack in the middle, framing a Founding Father’s face on a crisp hidden bill. And every wise parent knows the value of a two-dollar gift that can be used instantly — a Slinky, Silly Putty — never mind its two-hour shelf life. 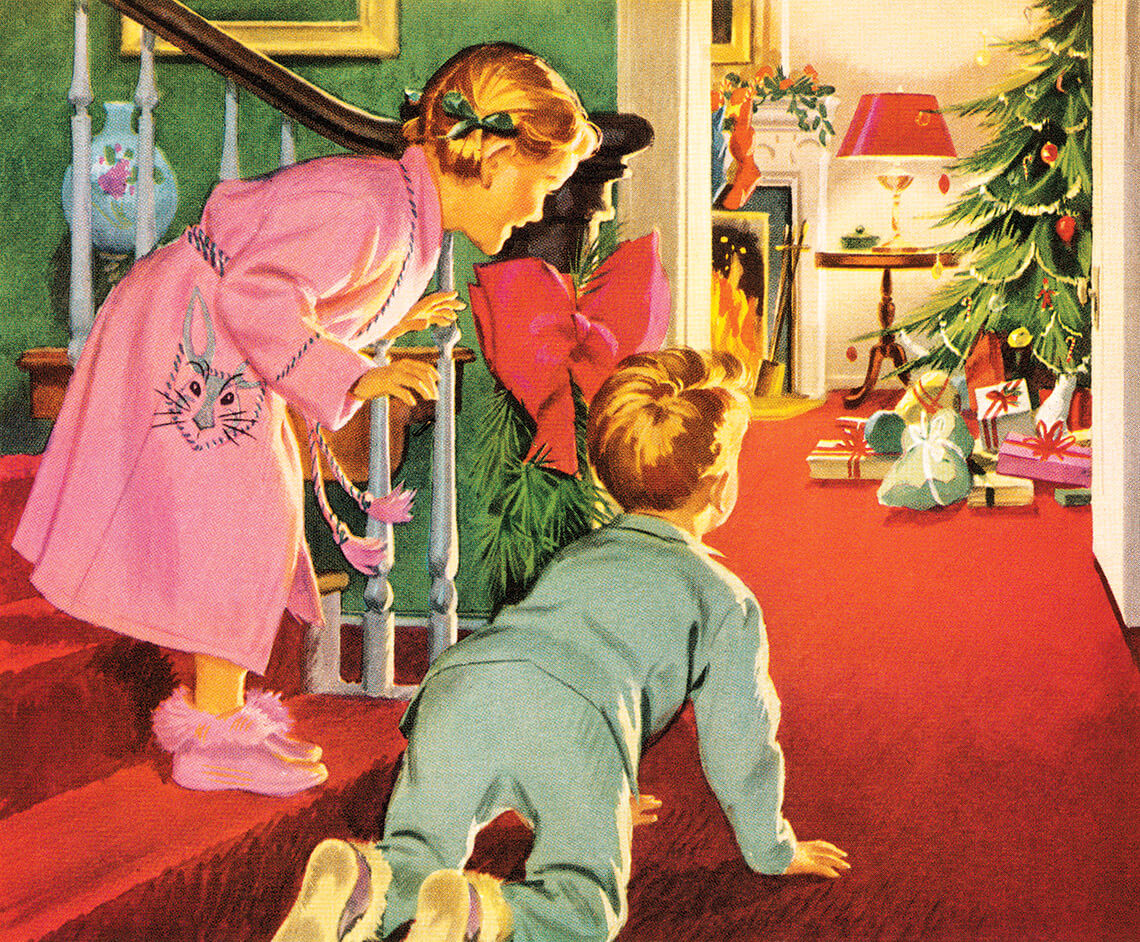 You waited on the stairs until an adult released your bed-headed self to race for the living room. illustration by CSA-PRINTSTOCK/GETTY IMAGES PLUS

And don’t forget the Christmas mornings remembered not by the gift, but by what happened, whether hilarious, happy, or, sure, a little heartbreaking. The morning the tree fell over; the dog ate the earrings; a baby was born; it snowed. The first one away from home. The year my sister and I groggily stumbled and staggered ’round the tree because my mother had given us a sleeping pill when we went to bed, to keep us in bed past 5 a.m.

It’s so compact, Christmas morning — a brief, fleeting matter of mere hours, when the Christmas morning scents, bacon and coffee and cinnamon and sugar, and Christmas morning sounds, the sizzle of frying sausage, the squeals of thrill, the crinkle and rip of wrapping paper, yield to later-in-the-day scents and sounds: a roasting turkey, the fret of an overtired child, the dishwasher’s churn. 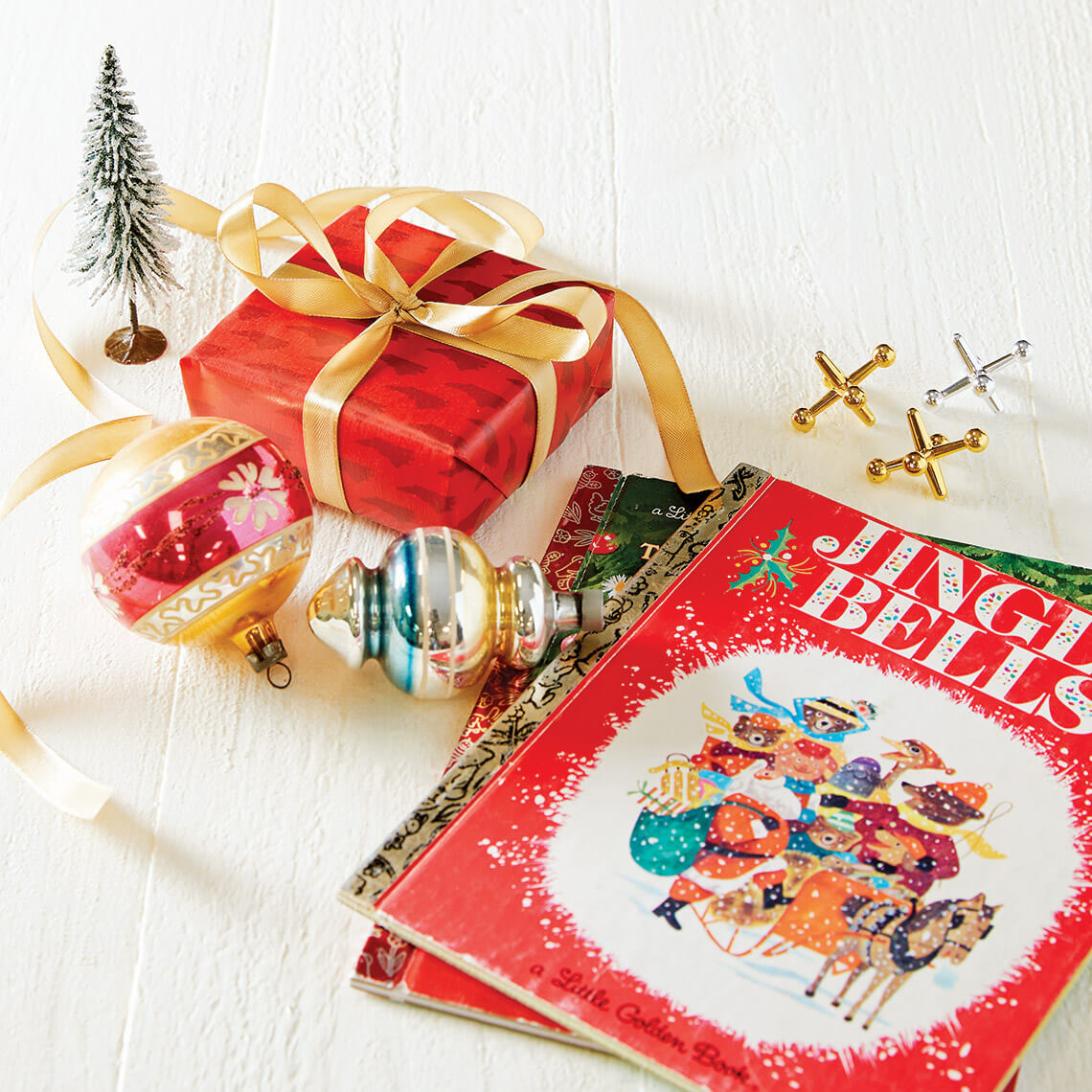 Everyone wishes for silver and gold: silvery heirloom ornaments on the tree and well-loved Little Golden Books to pass down and read together. photograph by Stacey Van Berkel

But why allow Christmas mornings to be dictated by the clock? Instead, let’s define it by sensations. A certain lounging laziness. A bathrobe-and-slippers coziness. The comedy of bedlam, the calm of a fire’s flames, the completeness of a crèche, when the Christ child can finally be placed in his manger cradle. The intimacy of mess, the warmth of hugs, the comfort of laughter and gratitude, the surprise of, well, surprises, whether in a box or in a face at the door (“What’d you get?”). And when Christmas is recalled — has become a memory — a day or a week or months later, the likelihood is that these feelings, these intangibles, will be stronger, have lasted longer, than the books, the perfume, the boots, the trampoline.

OK, maybe not the trampoline.

Capture the scents and sights and sounds, the blend of emotions so specific to Christmas morning, and you’ll have captured the essence of Christmas itself. Before the relatives arrive or the batteries expire or the shrieks subside, before the snow melts or the giftwrap is cleared, grasp it, grab it. Hold close the chaos or the calm. Stow it in your heart, where its flicker lingers like an afterglow, keeping the spirit of Christmas morning safe until another one rolls around.

Check out these related articles: