Chip Perry, a child of the Eisenhower era who remembers when cars had wings, stands on the balcony of his personal auto showroom in Blowing Rock and feels the urge to pinch himself. Often, when he gazes across this airy room, shiny cars parked side by side on the faux-wood porcelain floor, he feels like he’s in a dream. Might as well cue the sugar plums, because this can’t be for real.

And yet here they are, real cars as pristine and lustrous as newly fallen snow: An Adria Blue 1951 Porsche. A Rosede Green 1952 Porsche 356 America Roadster. An opalescent bronze 1962 Jaguar. When he beholds all of these wheeled wonders, the 68-year-old Perry feels like a kid on Christmas morning. “Every time,” he says. “To be able to enjoy these kinds of cars in this kind of place …” 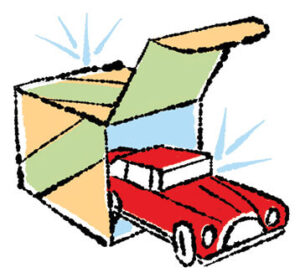 This 13,000-square-foot “Car Barn,” as Perry calls it, is about as jaw-dropping as the views from the nearby Blue Ridge Parkway. The exterior, with its natural stone and gray cedar, blends well with the traditional architecture in this mountain town. The cupolas and gambrel roof give it the look of a fancied-up barn, the kind that some people would turn into a venue for weddings and special events. It’s anything but a home for livestock. A comfy living room for both car and driver is more like it. Perry’s wife, Monica, insisted that it have a homey feel for entertaining guests. While the showroom is not open to the public, the Perrys do host the occasional soiree here to raise money for community organizations. 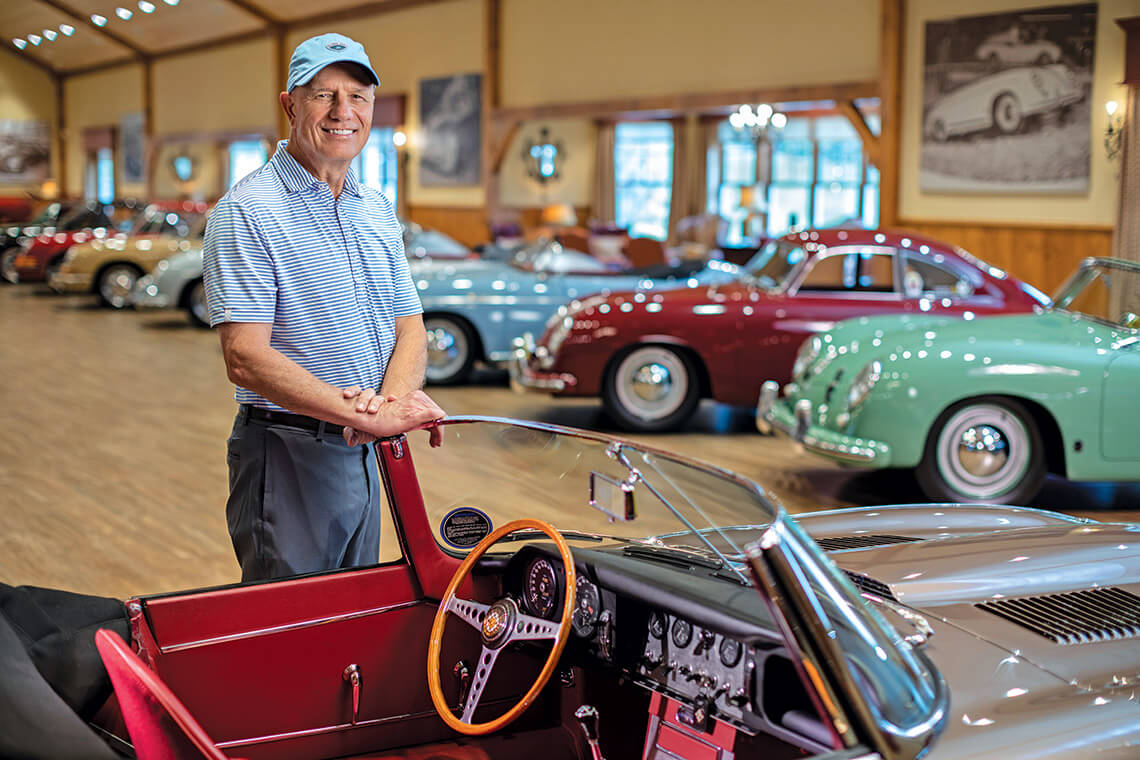 Chip Perry is proud of all of his cars, but he says his wife, Monica, is especially fond of the 1962 Jaguar E-Type. photograph by Jerry Wolford & Scott Muthersbaugh

Five chandeliers light this barn, which includes alcoves with sofas and coffee tables. It has a bar with wine and martini glasses at the ready, glinting like chrome. It has a study with shelves weighed down by car and golf books and magazines. “Lots of people like to sit on the furniture, sip their drinks, and just look at the cars,” says Perry, who’s dressed casually in a blue V-neck sweater and ball cap. Two Boston terriers, Mousy and Vivie, wander the floor, sometimes jumping onto a car seat.

The Car Barn, built by Lenoir-based Jerome Clark Construction and completed in 2018, shelters more than two dozen automobiles. It has air-conditioning and heat because these motorized beauties need all the pampering they can get — leaving them in a garage, immersed in humidity and subject to extreme temperatures, would cause them to deteriorate. The cars are lined up diagonally in two rows, their grilles pointed toward the door, ready to rev and roll. “My dream when we started this was to have a place where we could put my cars and drive out without having to move any other cars,” Perry says. “So you jump in and go.” 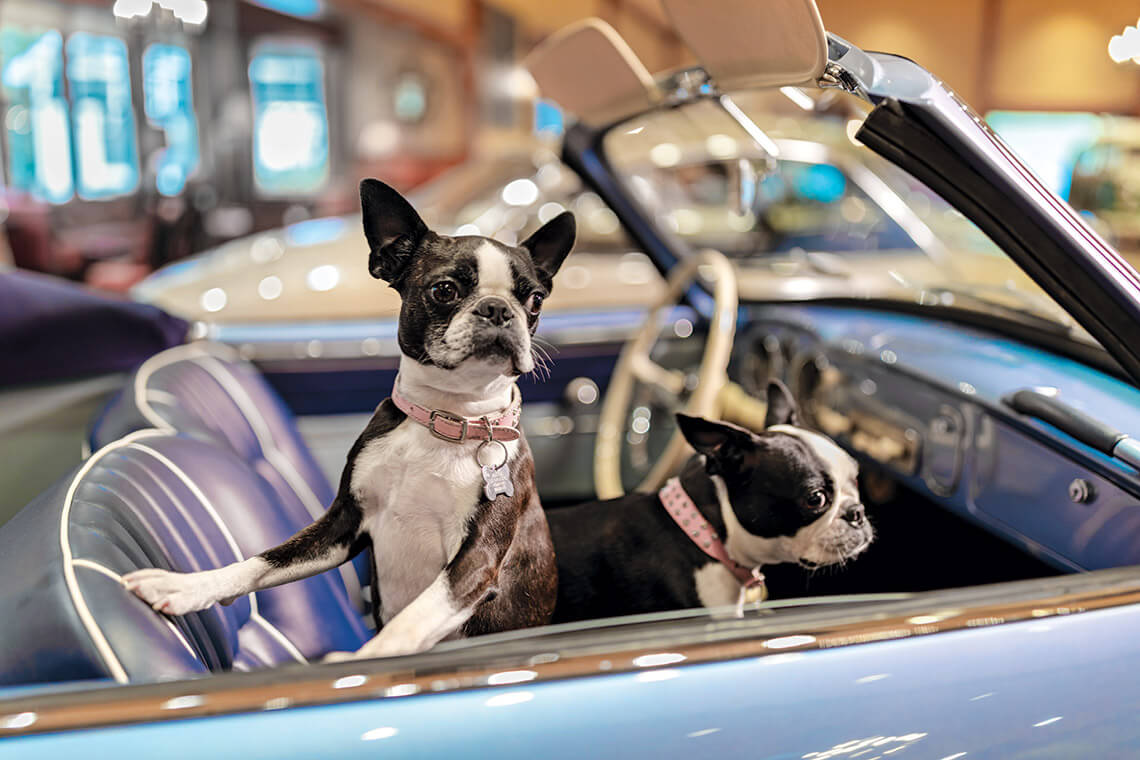 The couple’s Boston terriers, Mousy and Vivie, like to jump into the passenger seats of cars like this 1958 Karmann Ghia. photograph by Jerry Wolford & Scott Muthersbaugh

And go he does. At least once a month, Perry hops into the driver’s seat of each car and zips along U.S. Highway 221, a two-lane that burrows and switchbacks through hardwoods and white pines, southwest to Grandfather Mountain. Gripping the wheel, he leans into each hairpin turn, feels the side force against his body, feels the wind against his face, feels the melding of man and machine on the open road. “There’s a reason why these cars capture the imagination,” he says. “The entire driving experience is analog, not digital. It’s very much more connected to the car and the road.”

Perry’s quick to point out that while he doesn’t drive recklessly, he does give his cars a good workout. “I call it spirited driving,” he says. “Sports cars are made to handle well in the curves.” Once he reaches Grandfather Mountain, he turns around and motors back home on the Blue Ridge Parkway. To cruise its high-elevation curves is to experience spirited driving at its scenic best. Behind the wheel of a 1959 Porsche 356A Carrera Coupe or a 1956 Austin-Healey 110M, Perry breezes across the Linn Cove Viaduct, a photogenic bridge that weaves among the boulders and treetops like a concrete garland. He stops at any number of overlooks to take pictures of his cars against the backdrop of fir-topped ridges and hemlock-shaded coves.

Like any kid, Prery liked toy cars growing up, but he actually preferred the Revell model plane kits, bicycles, and skateboards that he found under his family’s tree at Christmas. His interest in classic automobiles lay dormant for years until it shot out like a Porsche in a Cup race. In 1993, he was working for the Los Angeles Times, leading a team in creating the newspaper’s first online edition. The Internet was in its infancy, and Perry wanted to be a digital pioneer. He’d earned a civil engineering degree from the University of Virginia and an MBA from Harvard Business School, so he had both tech savvy and business acumen.

As he successfully launched the digital LA Times, the owners of AutoTrader magazine were watching, and they lured Perry to Atlanta to do the same thing with their publication. “They gave me a one-page business plan and an empty office, and from that small beginning, the company took off,” he says. Perry saw a gaping hole in the market. “In the automotive industry back then, in the late ’90s,” he says, “only 5 percent of cars for sale in America were published in local newspapers.” In August 1997, Perry founded AutoTrader.com, the first major online marketplace for car buyers and sellers. The site grew to about 3,000 employees and made Perry a wealthy man. “That resulted in our ability to do this,” he says, nodding toward all the horsepower harnessed in his barn.

The first car he bought for his showroom was a 1966 Porsche 911; a few years later, he bought the pricier 1958 Porsche 356. But what really accelerated his car collecting was when renowned Porsche mechanic Pat Collins souped up one of Perry’s cars. “It was completely transformed,” he says. “And that’s when I realized how fun this car could be.”

Parked among the Porsches are Volkswagens, including a matte black 1946 Beetle that’s one of only 30 of its kind remaining in the world. He has a fondness for Volkswagen because of its role in his upbringing: A 1966 VW Karmann Ghia is what he drove to college after a childhood spent bouncing from base to base as the son of a U.S. Marine. Perry’s collection now includes a beige ’66 Karmann Ghia that he found in California with only 23,000 miles on it. “My family roots were in a car like this,” he says, gazing nostalgically at its sleek curves. “When I was a kid, there were Volkswagens everywhere.”

Of all the vehicles in Perry’s Car Barn, most are Volkswagens and Porsches. His affinity for Porsche stems not just from its sporty good looks but also from its relationship with Volkswagen: Ferdinand Porsche was the man who created the iconic Beetle. “The thinking and design engineering inside the Volkswagen is very similar to the mechanics of the Porsche cars,” Perry says.

Cars aren’t what they used to be. These days, they’re so high-tech, so automated, so insulated from the outside world. Quiet and luxurious are selling points. The act of driving has lost much of its thrill. “Modern cars,” Perry says, “just don’t require the kind of attention and skill that old cars require.”

For more than two hours, Perry has walked around the Car Barn with one shoe on and one off. He eyes a dime-size drop of oil on the floor and places a shoe there to mark the spot. “It’s my job to clean it up,” he explains.

It’s just that kind of attention to detail that characterizes someone who views cars not merely as transportation, but as inspiration. He sees every leak and nick, hears every tap and whir. Looking out over the steel and chrome, he still gets the urge to pinch himself. Then he clutches a steering wheel, cranks an engine, and it all feels so real, so good. So very good.