We’re in Highlands to escape The Rush. That’s what my older son calls the run-up to any major event — his birthday, our family beach vacation — though there is no Rush like the Christmas Rush. There is the fierce posting of the Christmas lists to the fridge. There is the counting down via our aggressively lo-fi Advent calendar: 24 tea candles on a cutting board. There is an ever-evolving negotiation related to belief systems centered on the North Pole. There is the frantic revising of those fridge lists. The shopping. The food. The pressure can get to be — well, it can get to the point where one might bail on all of one’s other obligations and find a small spot to rent far, far from home. Bonus credit, it turns out, if that spot is near the downtown Highlands ice rink.

There’s something about packing the van in a last-minute way and heading west into near-solstice sunshine that makes it feel like skating four hours from our home in Greensboro is the perfect answer to Christmas piling on all around us. We get hot chocolate first. The boys go back and forth about tricks they plan to execute. The air smells different up here, and I find myself for a moment thinking about the passage of time, wondering how long the boys will still be little enough to need help lacing up their skates. But soon enough, I’m not wondering anything, because they’re whipping ovals out on the ice, and it’s something at least joy-adjacent, if not outright Christmas-level joyful, just to watch them go.

They’re sad when we have to go, but we have to go. The sun’s getting lower, and there’s a hike I promised my little one we could try. And hear this, reader: The boys are not fighting. Nobody is asking how many days until Christmas. There’s just a quiet car with rubber-legged boys who just skated two miles and are up for more.

We’d seen the signs for it on the way into town — the Whiteside Mountain Trail — but, unlike ice-skating, had no idea what we were in for. We ask another family in the parking lot if we can make it up and back before sunset, and we get a hard maybe. Off we go, then, two fools and their dad up the side of a mountain, and — and there are icicles everywhere. It is an actual winter wonderland. In the steepest spots, there are stairs, and in some cases, the icicles curtain the mountainside behind the stairs in a very next-year’s-Christmas-card kind of way. The trail breaks out, eventually, onto a bald, and we’re so high up and so exposed that both boys lie down on the rock to hold on. They don’t need to hold on, I tell them when they ask, but they hold on anyhow. 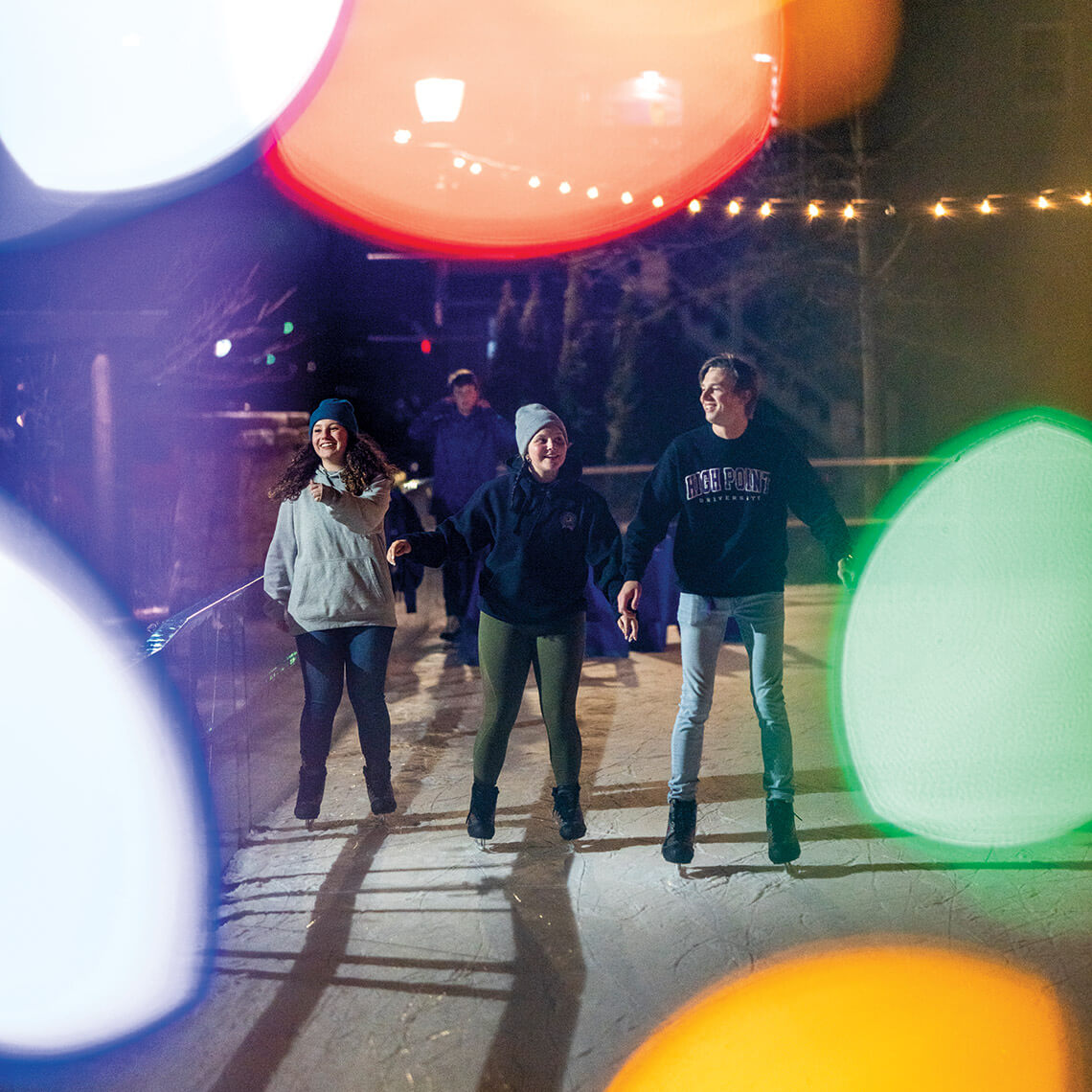 Since its completion in 2017, Kelsey-Hutchinson Founders Park has been a year-round gathering place in downtown Highlands, both off and — from November through early March — on the ice. photograph by Derek Diluzio

We make it halfway back down before sunset, finish in the gloaming, and in the purpled light of the gravel parking lot, my younger son wants to know: Can we go back? No, no, I tell him. Hiking in the dark is a sketchy proposition even with the proper gear, and we don’t have the proper gear. No, he says. Back to the ice-skating. And though I feel the pull of the cabin we’ve rented, a fire, a glass of wine, a pot of soup on the stove that I need only reheat, a cast-iron pan filled with cornbread —

Well, here. Let me send you this year’s Christmas card: See the boys out on the ice again, laughing and whooping, carving into the corners and shooting back out again. See the fairy lights strung overhead, lit now in the dark, Edison bulbs burning on a simple string that make the rink and maybe this block of downtown Highlands seem like the only place in the world. Mine are not the only kids out here, not the only ones shouting, not the only ones who’ve forgotten every other impulse save glee. Let’s put people in cozy coats, and let’s pink the cheeks of those folks working hard out on the ice. Though it wasn’t snowing when we were there, we can take some license and scatter a few flurries into the night sky.

Ours is a family that views the holiday season broadly, letting it run from the Friday after Thanksgiving — the first day, by rule, that it’s all right to turn on Christmas lights — through all 12 days of Christmas and sometimes even a little beyond. Maybe this is why we have such an affinity for outdoor ice rinks: They arrive just when we’re ready to start celebrating, and many of them are still waiting for us once we’ve put all our decorations away. They function something like a promise — they’ll carry us through The Rush, and then give us something to hang on to once all the tinsel’s been taken down. The shush of the skates on the ice reminds me of the broader season, the one we mark in our own way during the holidays, then carry with us into the quiet of true winter.

But back to that card: Merry Christmas from Highlands. Or just Happy New Year. May you survive your own Rushes, and no matter what you celebrate, may the season bring peace and joy to you and yours. May it also bring you a pair of rental skates, maybe even from somewhere fairly far away.

Related: Check out these other ice-skating rinks around North Carolina.