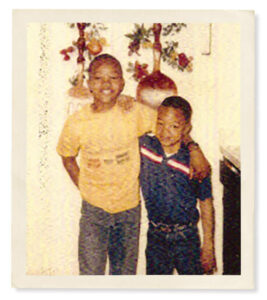 The young Holt brothers during the holidays in Gibsonville. Photography courtesy of THE HOLT FAMILY

The living room in the small apartment on Gibsonville’s west side is strewn with torn wrapping paper, bows, and shiny new toys. It’s a few hours into Christmas, and Torry and Terrence Holt, exhausted from the excitement of opening presents, are watching cartoons and scarfing down the eggs, bacon, and sausage that keep coming from their mom’s cast-iron skillet. For weeks, the brothers have been looking forward to Christmas Day’s exhilarating kickoff, but now, as afternoon creeps in, they’re antsy to get out into the chilly sunshine and share the morning’s haul with their friends. This year, the brothers got Nintendo Game Boys and a football to replace the one that Santa brought last Christmas, now scuffed and worn from months of hard play.

After breakfast, the brothers head out the door of their two-story brick apartment building on Homestead Street and take off toward Edward G. Murrell Park, two blocks away. It’s there, amid six acres of grassy fields and asphalt courts in the shadow of a town water tower, that the Holt brothers spend every moment they can, competing with their friends and neighbors in games of basketball and football. From informal contests in which one kid grabs a ball and darts past everyone else in a one-versus-all test of elusiveness, to practices and games with Gibsonville Parks & Recreation, these fields are where the Holt brothers first show that they have the moxie to excel. 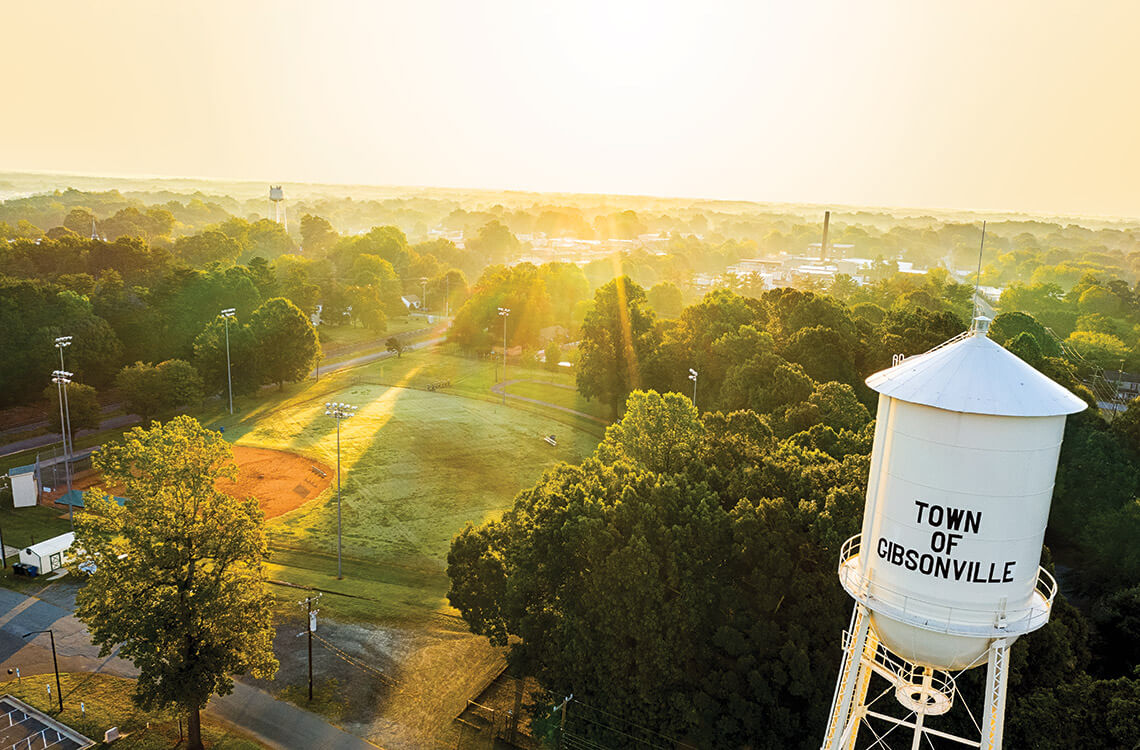 A bird’s-eye view of Murrell Park in Gibsonville. photograph by GABRIEL NELSON

Football will take both brothers far away from this neighborhood, catapulting them to stardom at North Carolina State University and then the National Football League before eventually setting them back down in Raleigh, where they’ll start families and pursue new opportunities in construction and charity work. But on this Christmas Day in the late 1980s, the Holts are like any of the other kids in their neighborhood, reveling in the giddy fun of the most wonderful time of the year.

Looking back on those holidays past, younger brother Terrence remembers the community of kids that gathered in that Gibsonville park. “Everybody had their bikes, their skateboards, their remote-control cars. Everybody just wanted to be out there celebrating Christmas together,” he says. But the Holt brothers saw beyond the horizon. “We appreciated what was outside our door, which was the whole world, where we could dream big.” 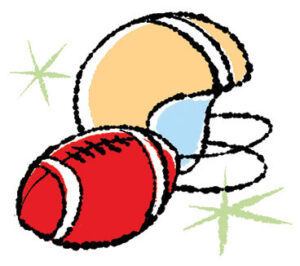 For the Holts, visits to Gibsonville today usually stick to the same beats. Whether they’re seeing family around the holidays or just passing through, they’ll often pick up some Hummin’Bird Helles at Red Oak Brewery in nearby Whitsett, then head to Gibsonville’s Main Street for a bite to eat at Jack’s BBQ, where the hush puppies, sweet tea, and quarter-pound burgers are, to them, what home tastes like. They’ll also try to fit in a drive down Homestead Street or a visit to Murrell Park, where their football journey began.

That journey continued as the brothers became standout players at Eastern Guilford High School and NC State, where their football identities took shape. As a receiver, Torry’s explosiveness and grace often turned short passes into long, thrilling touchdowns and earned him several school records, all- American status, and a spot in the College Football Hall of Fame. Terrence, an all-American safety, finished his career as the Atlantic Coast Conference’s leader in blocked kicks. 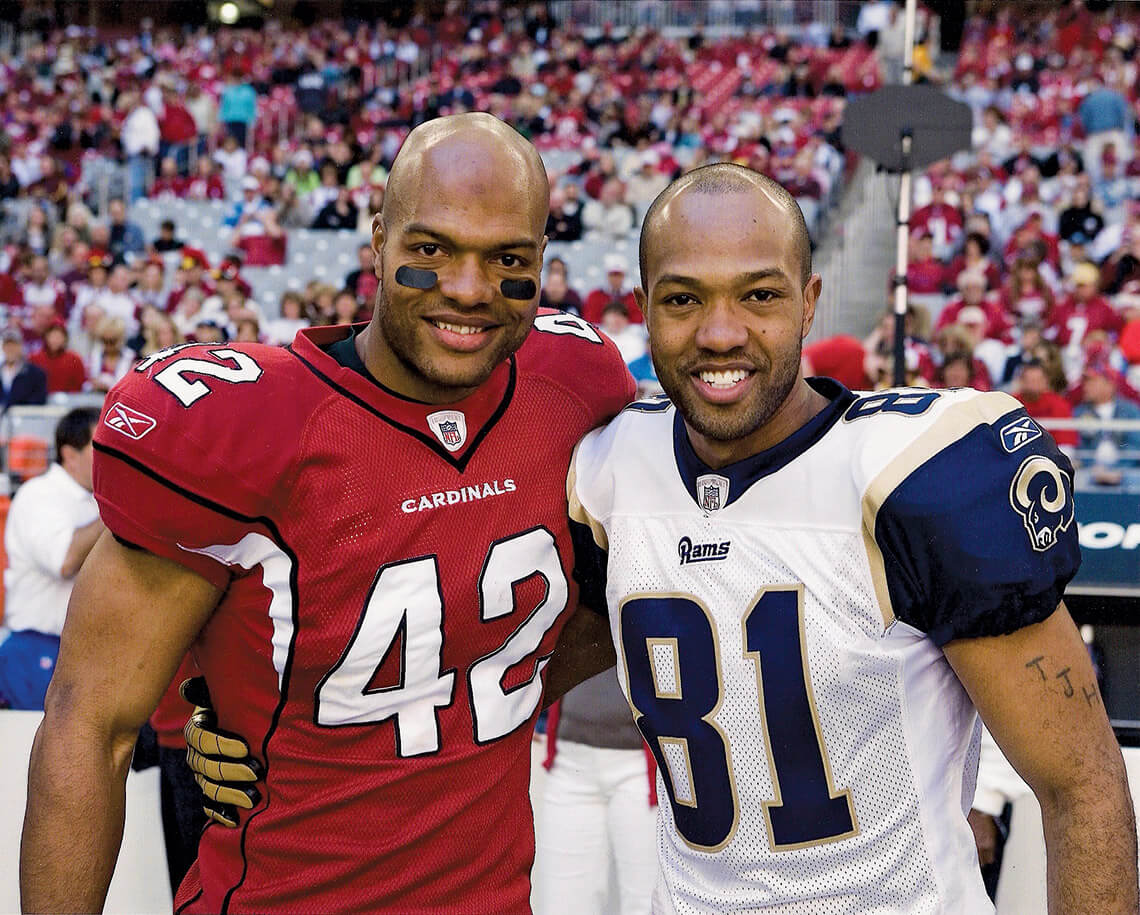 Terrence (left) and Torry Holt opposed each other as Cardinals and Rams. But in their hearts and souls, they’ve been inseparable since they played ball as kids at Murrell Park in Gibsonville. Photography courtesy of THE HOLT FAMILY

But the brothers’ contributions run deeper than statistics and awards. Both played starring roles in some of Wolfpack football fans’ most cherished memories. On a September afternoon in 1998, Torry gave a masterful performance in an upset of then-national powerhouse Florida State University. One of his two touchdowns that day looked like a play from Murrell Park as he caught a punt, cut back across the field, bowled over a pair of defenders, and outran the rest for a 68-yard score. The following year, Terrence blocked two kicks in a wild victory at the University of Texas to start the 1999 season. He ended up playing six seasons in the NFL, seeing action with the Detroit Lions, the Arizona Cardinals, and the New Orleans Saints. Meanwhile, Torry became a franchise pillar for the St. Louis Rams, reaching seven Pro Bowls and winning the Super Bowl in 2000. 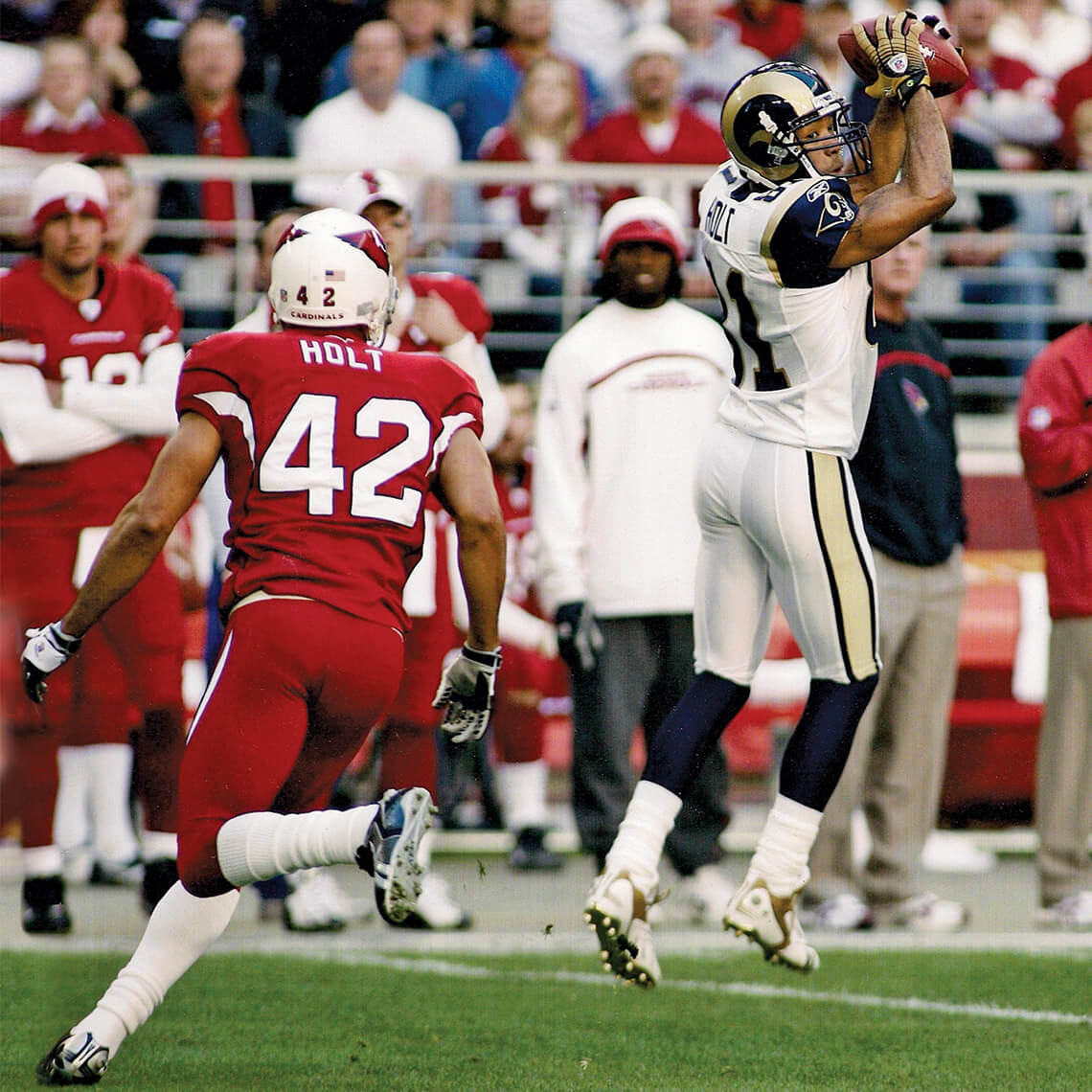 As a Ram, Torry receives a pass while Terrence, with the opposing Cardinals, runs toward him. Photography courtesy of THE HOLT FAMILY

With sports taking them across the country, the Holts made sure that their hometown got to share the ride as they hosted a football camp for Gibsonville kids each summer. And reminders of their careers are everywhere in town today, from the framed jerseys and newspaper clippings on the walls of Jack’s BBQ to signs on the way into Gibsonville proclaiming it the “Home of Torry Holt.” Both brothers’ names appear on Eastern Guilford High School’s scoreboards and press box, listed as star athletes and generous benefactors. “Gibsonville is a small town, and you might not think it offers a lot,” Torry says. “But to us, it had everything.”

Jane Smith, a former Gibsonville Parks & Rec director, smiles when she remembers what Torry once told her when he was a child: He said that he’d one day play in the NFL and return home in a limo. “They had something special,” Smith says. “They were bright kids, good leaders, and had a drive to get better. They also had a lot of joy out there.”

During their years in the NFL, the Holts were often forced to celebrate Christmas separately, in far-flung cities. Today, that’s no longer the case. Living only five minutes from each other in Raleigh, they’ve created new holiday traditions that hark back to their childhood in Gibsonville. Terrence and his family host a Christmas Eve dinner each year, which is followed by a Christmas Day gathering at Torry’s place. “Whatever we do,” Terrence says, “the common thread is that we’re together.” 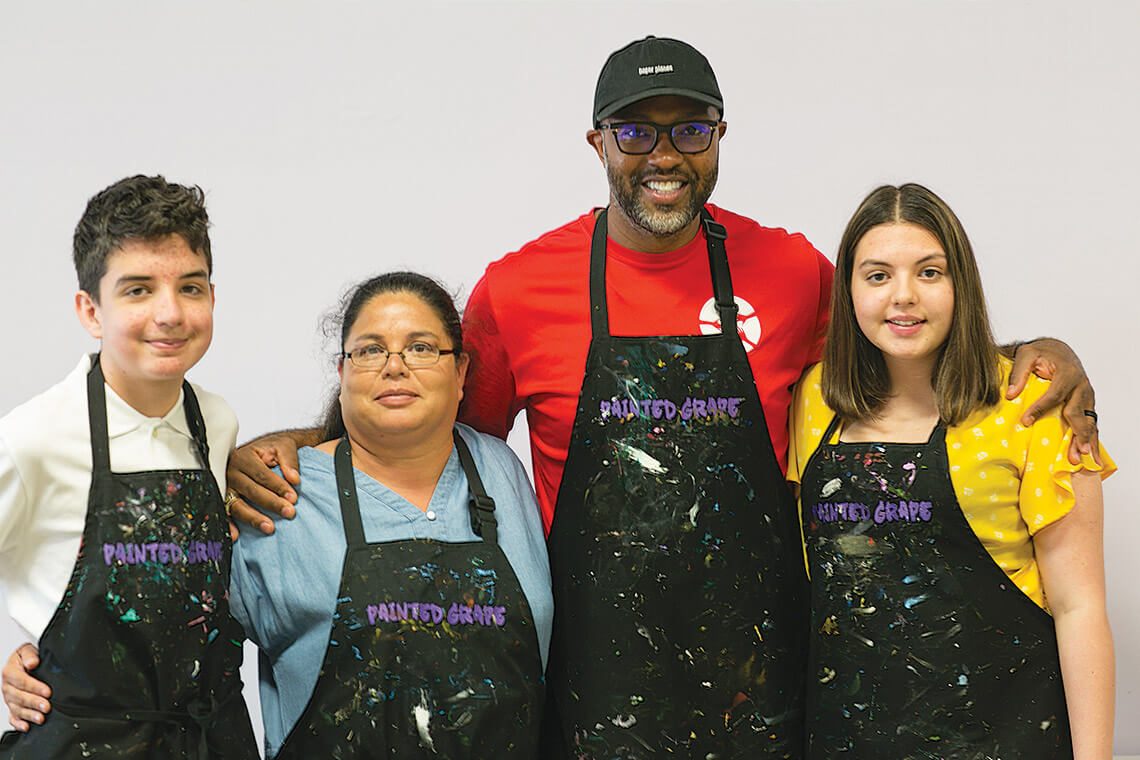 At a KidsCan! event at The Painted Grape in Burlington, Torry shared the story of losing his own mom with other children of cancer patients. Photography courtesy of CARLA HOLT

One person who can’t be together with Terrence and Torry during the holidays to make eggs and sausage in her cast-iron skillet is their mother, Ojetta, who died two days after Christmas in 1996, following a long battle with lymphoma. In 2001, the two set up the Holt Brothers Foundation to help programs like KidsCan!, which provides guidance, support, and fun outings for children of cancer patients. There, the brothers share their own experiences with young people who are in the same situation as they were. “Kids just flock to them,” says Patty Brothers, director of the KidsCan! program at Alamance Regional Medical Center, where Ojetta received some of her treatments. “They just have a way about them that’s so kind and so generous.”

In the late 2000s, when the Holts realized that football couldn’t last forever, they started to explore what might come next in their lives together. In 2011, they founded Holt Brothers Construction, which has worked on projects that include the UNC REX Cancer Center, Raleigh’s Union Station, the renovation of NC State’s Reynolds Coliseum, and the downtown area’s soon-to-be-built North Carolina Freedom Park, which will honor the experiences of Black North Carolinians.

While the Holts now spend their Christmases in Raleigh, at some point around the holidays, they’ll hop in their shiny SUVs and drive to Gibsonville. And just as they did on Christmas mornings past, they’ll find their way to the frost-covered fields of Murrell Park. Football gave the Holt brothers a way to broaden their world, but the center of that world will always be right there on the west side of Gibsonville, inside a small apartment in a two-story brick building on Homestead Street: the warm home where Terrence and Torry were inspired to make the most of their gifts.