Heath Newton is on the move, bouncing through his 10,000-square-foot maze of a store, Cape Fear Games in Wilmington. Newton ran track in high school, and it seems as though this man in suede sneakers is still trying to break records. He passes by industrial racks holding towers of board games, a row of employees handling online orders, and a back room filled with orders awaiting shipment. Finally, he reaches the retail area: long, tidy rows of wooden tables and shelves stacked with 1,500 board games and puzzles. 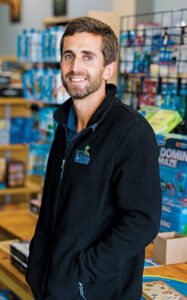 “I’m often in the back, on the computer,” Newton says, catching his breath, “but I like being out here talking to customers a lot more.” Nearby, two men set up miniature fighters for a round of Warhammer. This is where the fun is — the titles that captivated Newton in his youth, and still do. “I’ve always enjoyed nerdy stuff,” he says.

Cape Fear Games celebrates the tradition of families and friends pulling up chairs around a table for game night. These are not online games with video consoles and high-tech computer graphics; they’re analog games that connect people directly to each other. Newton’s customers prefer moving physical pieces across real boards and using cards and dice that they can hold in their hands. “People play board games to get that interaction that a lot of people are missing out on nowadays,” he says. “Sitting across a table from another person is much different from talking through a headset on Xbox.” 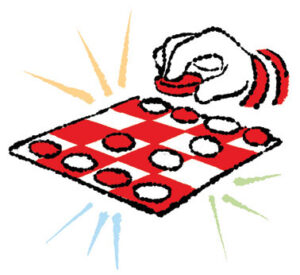 The game changer for Newton came one Christmas, when he ripped the gift wrap from a box and discovered The Settlers of Catan inside. It’s a board game that challenges players to develop an imaginary island. Newton was 23 years old at the time, and already a casual gamer. But Catan was special. “It’s a very, very popular game, and it’s also a really easy one to get people into,” he says. “It’s a ton of fun, so I played it hundreds of times.”

Growing up in Hendersonville, Newton’s family played card games like gin rummy as well as the board games Risk and Monopoly. On his own, he discovered the world of video games: Final Fantasy and The Legend of Zelda. He also played Magic: The Gathering, a fantasy card game that he learned from his friend Gok Khen Cheng. As high school freshmen, the two would battle it out in the heat of Cheng’s attic, and Newton also used the cards to fill downtime at track meets.

“We only hire nerdy people,” Newton says with a grin. “If you’re not nerdy, you can’t work here.”

When he moved east to attend the University of North Carolina Wilmington, Newton earned extra income by selling Magic: The Gathering cards online. He continued that business after he graduated with a degree in computer science in 2005, but eventually rolled the dice and opened his physical store in 2009. Cape Fear Games has since grown, and now includes an adjacent café, The Sideboard, where customers can eat and drink as they play Katamino, Wits & Wagers, or any of the hundreds of other games on the shop’s lending shelves.

The store’s employees are mostly young, eager people who know and play the games that they sell. The uniform is game-shop casual: shorts, sneakers, and polo shirts featuring the store’s mascot, a green goblin named Steve Henry Gobs. “We only hire nerdy people,” Newton says with a grin. “If you’re not nerdy, you can’t work here.” The ambience is similar to that of a record shop. Questions about games draw enthusiastic replies not only from the employees but also from customers within earshot. “That happens all the time,” he says.

As Newton continues maneuvering around the shop, a little boy approaches the cashier. He wears a Superman T-shirt and holds a single bill. “Do you have any Pokémon cards that are one dollar?” he asks.

The employee scans the glass cabinet beneath the register. “I don’t see any at the moment,” she says, then leans forward and lowers her voice. “I will say that there’s a box in the back, and there are some cards in there. You can take one.”

The boy scurries off.

Another customer, Luke Morse, wanders up to chat with Newton about a recent purchase. Morse has been part of the Cape Fear Games scene for years, and every time he stops by, he stays for a couple of hours. Today is the 26-year-old’s fourth visit this week. “You meet the nicest people through all the board games,” Morse says. “You can come here any night of the week and something will be going on.”

Cape Fear Games sits between an optometrist’s office and a jewelry shop in a red brick plaza fronting Oleander Drive in Wilmington’s midtown. Visitors who complete the initial challenge — tight parking — step under a green awning to enter a fun house that’s anything but a dusty dungeon of traditional board games.

The afternoon sunshine floods through floor-to-ceiling windows, and rows of LED track lights wash over shelves of blue, yellow, and gray boxes with wacky names that, together, look like the extra-long title of a comic strip: Cheeky Monkey, Rhino Hero, and the Potato Pirates. Nearby, a Crokinole board invites customers to flick discs across its Baltic birch surface. On the walls, TV screens show videos — of people playing board games.

The store’s relative quiet is punctuated by the chirp of the door opening and the trill of the phone ringing, along with the occasional outburst from a young customer: “I need to solve the cube!” In hushed tones, a couple confers over the fantasy game Mystic Vale. The sound system plays songs by the Beatles and Fleetwood Mac. 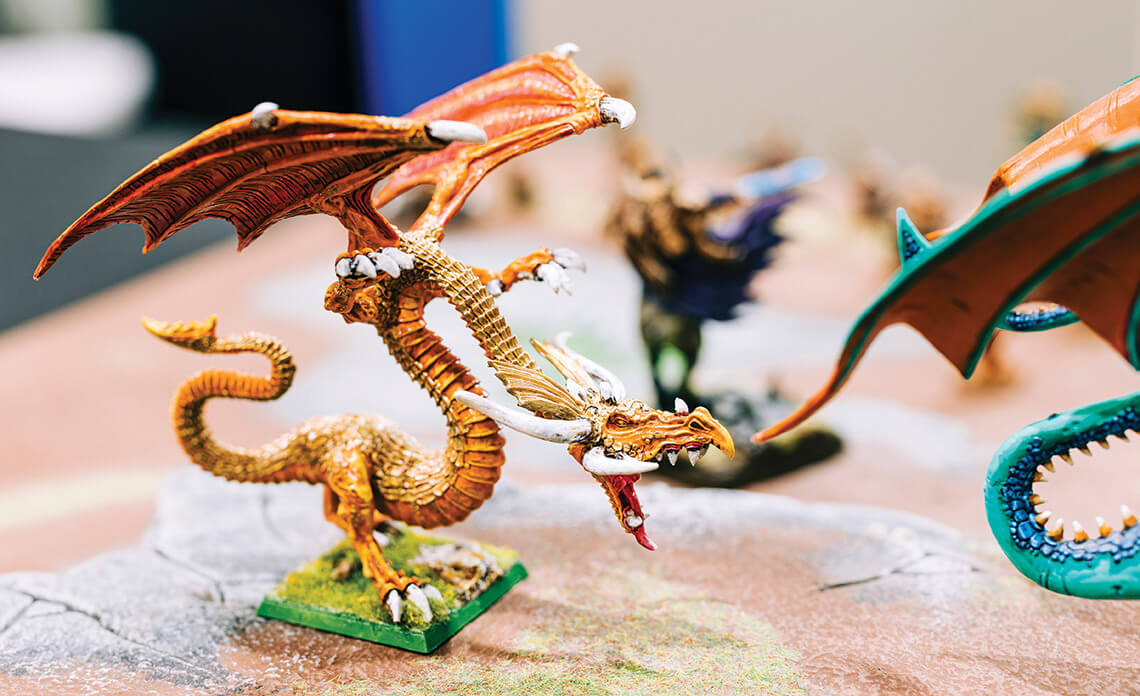 “We have a lot of parents, and we have a lot of grandparents — people who just enjoy games and aren’t quite as into it as I am,” Newton says. “One of the really important things to me when I opened the store was that it be welcoming. I wanted everyone to feel comfortable when they walked in.” At 41 years old, Newton is still as thrilled by gaming as he was as a kid. He’s married now, with two children of his own, Zeke and Ryder — and, yes, the family plays board games together.

To this day, Newton can’t remember exactly who gave him that Settlers of Catan game for Christmas all those years ago. It might have been his wife, Kendall. It might have been one of his friends. What he knows for certain is that the gift was a winner. It set him on Square One of what has become an exciting career in fun and games.

“I just got more and more into it,” he says. “If I had not played Settlers of Catan, I don’t think Cape Fear Games would be here.” He smiles. “And I can’t imagine doing anything else.”

Pull Up a Chair at These Game Cafés

Book a table to play games for the entire night at this family-friendly tavern. Compete against your friends in a variety of games — think Apples to Apples, Jenga, Pandemic, or Pokémon. While you’re playing, enjoy food items like pretzel bites, buffalo chicken, and flatbread pizza, plus local beer, wine, and mead.

Located on wreath-decorated, light-lined Main Street, this board game parlor will put you in the holiday spirit. Drink wine and local beer, and snack on small plates while you play one of 300 available games. Experts can help you set up and teach you the rules of a select number of games like Catan and Mysterium.

During the first weekend of December, this board game café will host an outdoor market featuring the work of local artists. After shopping, step inside the café to order locally roasted coffee, wine, or craft beer, and browse the shop’s more than 400 board games. Indecisive customers can consult the game masters on staff.