The bicycle shop in David Johnson’s suburban garage in Winston-Salem is a laboratory of painted tubes, work stands, and tools. Frames hang from the ceiling, and completed bikes draped in protective plastic coverings await pickup. A whiteboard lists all of the orders on Johnson’s six- to eight-month waiting list, with notes on each client. It’s clear that this 55-year-old bicycle maker loves every step in the process of turning tubes of steel into tailor-made two-wheeled wonders. “A bicycle is one of the most unique environments that you’ll ever put yourself in,” he says. “You’re the engine, you’re the pilot, you’re the passenger, you’re the navigator.” He pauses and chuckles. “And you’re hopefully enjoying yourself. If you’re not happy, something’s wrong.” 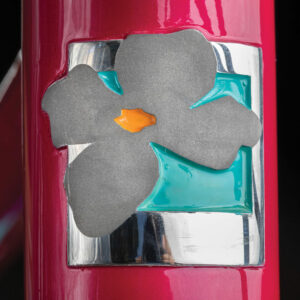 Johnson creates his head badges by curving a piece of stainless steel, brazing it with silver, and blasting the dogwood flower for a textured finish. photograph by Jerry Wolford & Scott Muthersbaugh

Johnson compares his craft — its emphasis on time, workmanship, and exacting standards geared for maximum joy — to that of creating the high-quality barbecue that North Carolina is famous for. That’s why the signature iconography for his Dogwood Cycleworx brand is a rotund hog frolicking in front of the Cape Hatteras Lighthouse. Black outlines of the swine hide out in an inconspicuous nook on the frame, right behind the pedals. “In this state, barbecue is a religion that starts with an oink,” he says. “So this is my way of saying that this bicycle is handcrafted. It’s my ode to North Carolina.” The head badge — the metal logo on the tube at the front of the bicycle — is a stylized dogwood flower. Lest the message be unclear, the words “handcrafted in North Carolina” adorn each bike that rolls out of this shop. 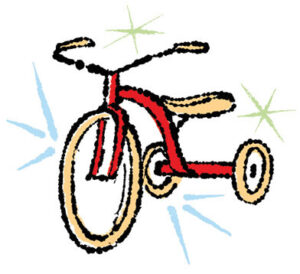 Like kids all over the country, Johnson always longed to wake up on Christmas morning and find a sparkling new bicycle under the tree. But a bike never materialized. Instead, his parents insisted that he get a paper route and buy one for himself. So, beginning at age 13, he’d get up early on weekend mornings and set out on the sleepy, tree-lined streets of his neighborhood in Roanoke, Virginia, fantasizing about the day when two wheels would replace sneakers as his mode of transportation. He saved every penny he got until he could afford the bicycle of his dreams — a champagne gold 12-speed Ross Gran Tour. Then he took the money he’d earned to a local bike shop and plunked it on the counter. “I paid $181 in change for it,” he says. The moment he threw his leg over the top tube and pressed down on the pedal, Johnson knew that he’d discovered his destiny. “All of a sudden,” he says, “I felt freedom, a sense of flight. It was like, Yep, this is it!”

Newer and better bicycles followed him from middle school to high school. When he was a senior, rather than join his classmates for a boozy spring break vacation, Johnson planned a solo bicycle trip from Roanoke to Williamsburg. When he joined the Navy at 18, he spent his time off visiting bicycle shops and pedaling around the countryside. In Italy, he discovered racing culture. He explored Sicily, and later, he rode his bike around Hawaii.

After returning stateside for art school at Virginia Western Community College, Johnson eventually pursued a career in welding that brought him to an aviation maintenance company in North Carolina. In his spare time, he continued to ride. 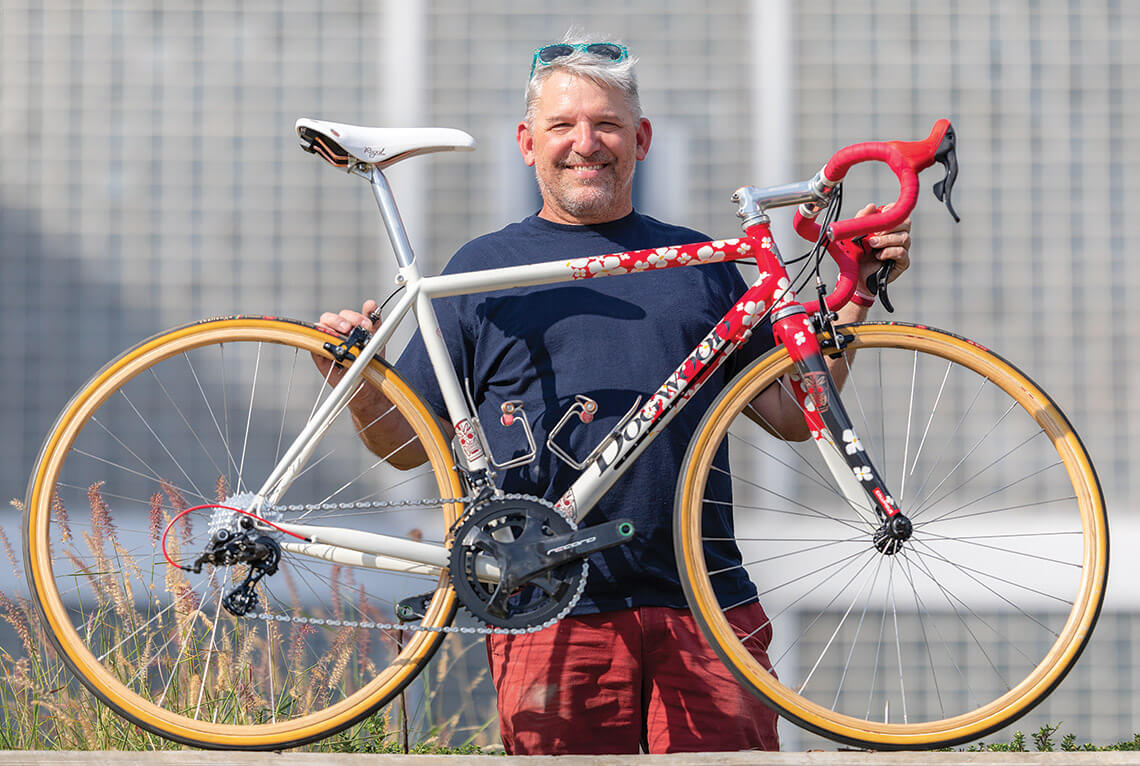 And then the recession hit in the late 2000s. Johnson was laid off. He knew that he wanted a change. “I was trying desperately to find something,” Johnson says. “I’ve never been an inside-the-box kind of guy.” While working in aviation, he’d gained experience welding the same kinds of materials that are used in bicycle-making. His art-school training grounded him in design, and his obsession with bikes had always simmered beneath everything that he did. He didn’t like working for other people anyway, so finally, in 2010, he cashed out his 401(k). “I went, You know what? I’m going to be the Man. So I started frame-building.”

In the earliest days of his business, Johnson recruited bike-savvy friends to help test the frames, telling them to be unrelenting. “I want you to beat this thing within an inch of its life and see what it does,” he said to his buddies. He hoped that the frames would break, he says, so that he could learn from the failures what worked and what didn’t.

He named his nascent enterprise Dogwood Cycleworx for the clusters of snow white flowers that bloomed outside his childhood bedroom window. “As a kid, when I started seeing those things pop out, spring was here,” he says. “It was time to go outside.” It didn’t hurt that the dogwood was the official flower of both his home and adopted states.

Through all of the changes and uncertainty in Johnson’s life, he kept pedaling. There was the social ride with “like-minded crazies” who took the hundred-plus-mile round trip from Greensboro to Chapel Hill — five and a half hours of smack-talking and cruising with friends. Another memorable journey involved dropping off the Blue Ridge Parkway and savoring the twisting roads, the foliage, the wafting smoke from campfires, and the tempting scents of barbecue cooking. He braved North Carolina’s humid summers and freezing winters.

The miles logged, the sweat, the elbow-to-elbow competition of jostling around corners and jockeying for position with other riders aiming to podium — all of it toughened him up. “As a cyclist, you learn to live in pain,” he says. “Maybe that’s part of the big-picture lesson.” His Buddha-like nature when encountering challenges on the road became a metaphor for his life out of the saddle: Mountains, he believes, have to be climbed before they can be descended. “You’re paying in pain to get the exhilaration and pleasure of going down,” he says. “You must pay the bill in order to reap the benefits.”

Standing in his shop, surrounded by creations that are equally as impressive for their artful beauty as for their superior construction and technical precision, Johnson knows that he’s literally built his livelihood one bicycle journey at a time. Bikes have given him something — maybe everything — to live for. “There are friends, there are experiences, and there’s the exhilaration,” he says, and then pauses to reflect on his decades of adventure and a business that allows him to empower others to seek the same in their own lives. Bicycles, he says, “return you with amazing gifts.”

Looking back on his long ride from penny-pinching paperboy to welder to bicycle maker, he now appreciates his parents’ decision not to give him a bicycle for Christmas. When he finally bought that 12-speed Ross Gran Tour with the coins that he’d saved delivering newspapers, he remembers feeling a sense of pride. “I earned it all on my own,” he says. “I paid for it. It was mine.”

Today, when Johnson encounters bumps along the road, he leans into them — literally and metaphorically — and just keeps pedaling. “My happy place is on top of a bicycle,” he says. “I get rid of all the anger, hate, frustrations, and tension. That’s my therapy. That’s my religion.”