Some puzzlers are born. Others, like 80-year-old Betty Warren of Raleigh, have puzzling thrust upon them. It started on another boring day in the midst of Covid-19 shutdowns. An extrovert, Betty was cut off from the five bridge clubs that formed her social network, and she found herself facing several more months of isolation. Then she saw a newspaper article about the growing popularity of Winston-Salem-based Heritage Puzzle: Cooped-up people just like her were seeking ways to pass the time. She decided to work a puzzle, her first as an adult. Her husband, John, joined her.

What followed was a blur of lighthouses and sandy beaches, snowy fields and Christmas scenes. In their sunroom, the Warrens set up two card tables — one for the work at hand, the other to prop up the box-top image of the completed scene. When the thick poster board that they used as a base wore out, they went to Target and bought more. Next thing they knew, six months had passed, and they’d pieced together 120 puzzles.

Since 1988, Heritage Puzzle has provided the vehicles for jigsaw puzzlers, casual and obsessive alike, to travel to the mountains, to the coast, to a cozy cabin with the world’s most symmetrical Christmas tree — all from the comfort of their homes. The company has created 250 puzzles over the years, many depicting nature, wildlife, and a few region-specific settings. 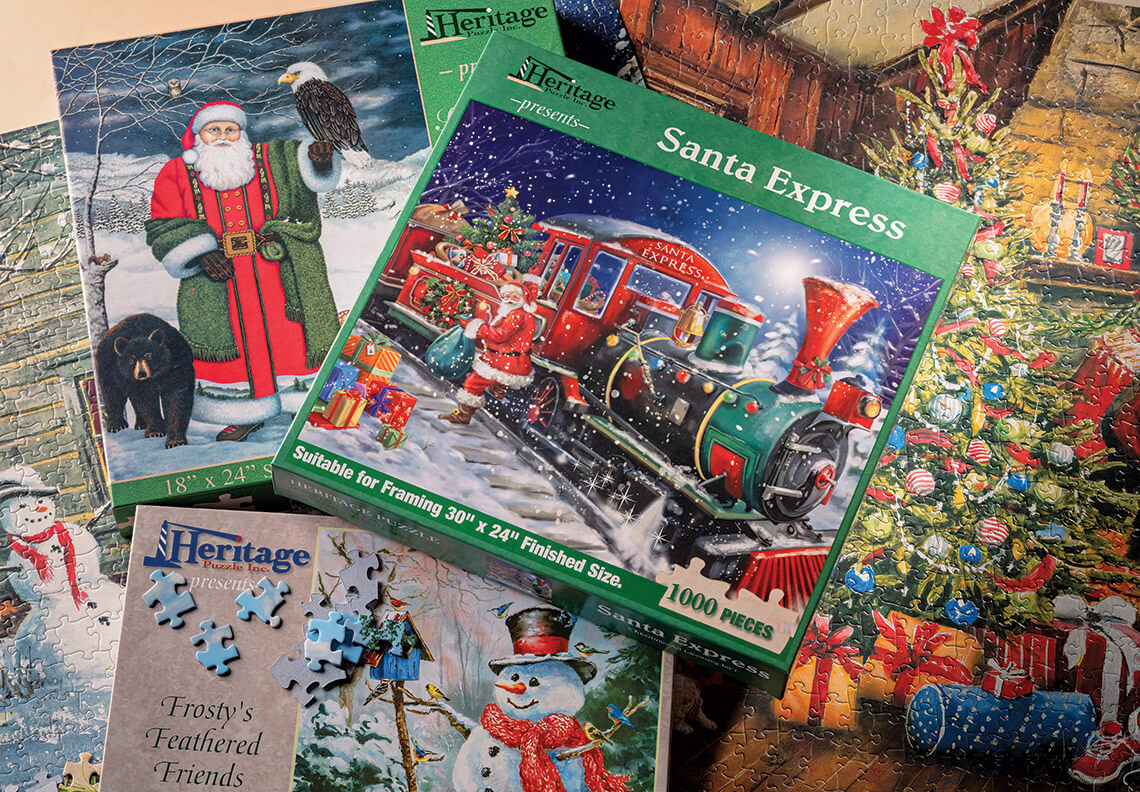 And Christmas selections, too. In “St. Nicholas at Grandfather,” Santa looks directly at the viewer as he stands bundled up on a patch of snow, surrounded by a bear, a deer, an eagle, and other critters native to the iconic mountain near Linville. In “Cozy Christmas,” two dogs and a cat warm themselves by a cast-iron stove framed with red-berried boughs of holly. And in “Santa Claus Express,” the jolly old elf loads a train with bright packages as a light snow falls.

Perhaps one of the foil-wrapped gifts that Santa is loading contains a puzzle from Heritage — low-hanging fruit for Christmas-present sleuths who know exactly what they’re getting when they shake the package and hear the pieces knocking together in a cardboard box. That unmistakable sound signals what the coming hours will bring: an odd mix of concentration and relaxation followed by gratification. “It’s something to focus on. It’s the satisfaction of finding the right piece,” Karen Everhart, Heritage’s president, says of the appeal of working a puzzle. “It takes people away from something.” 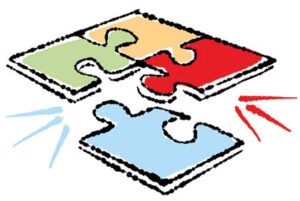 Heritage Puzzle’s headquarters, which sits in a heavily industrial section of Winston-Salem just off U.S. Highway 52, doesn’t look like something you’d see on a jigsaw puzzle. It’s a warehouse with a small, sparsely decorated office to accommodate the company’s three employees — Karen; her son, Matt; and part-timer Kelly Wham. Pass through the archway, though, and you’ll get to the heart of the operation. Puzzles are everywhere, sorted into metal bins arranged by the number of pieces — 550 or 1,000, and nothing in between — and then by the artist or the photographer. 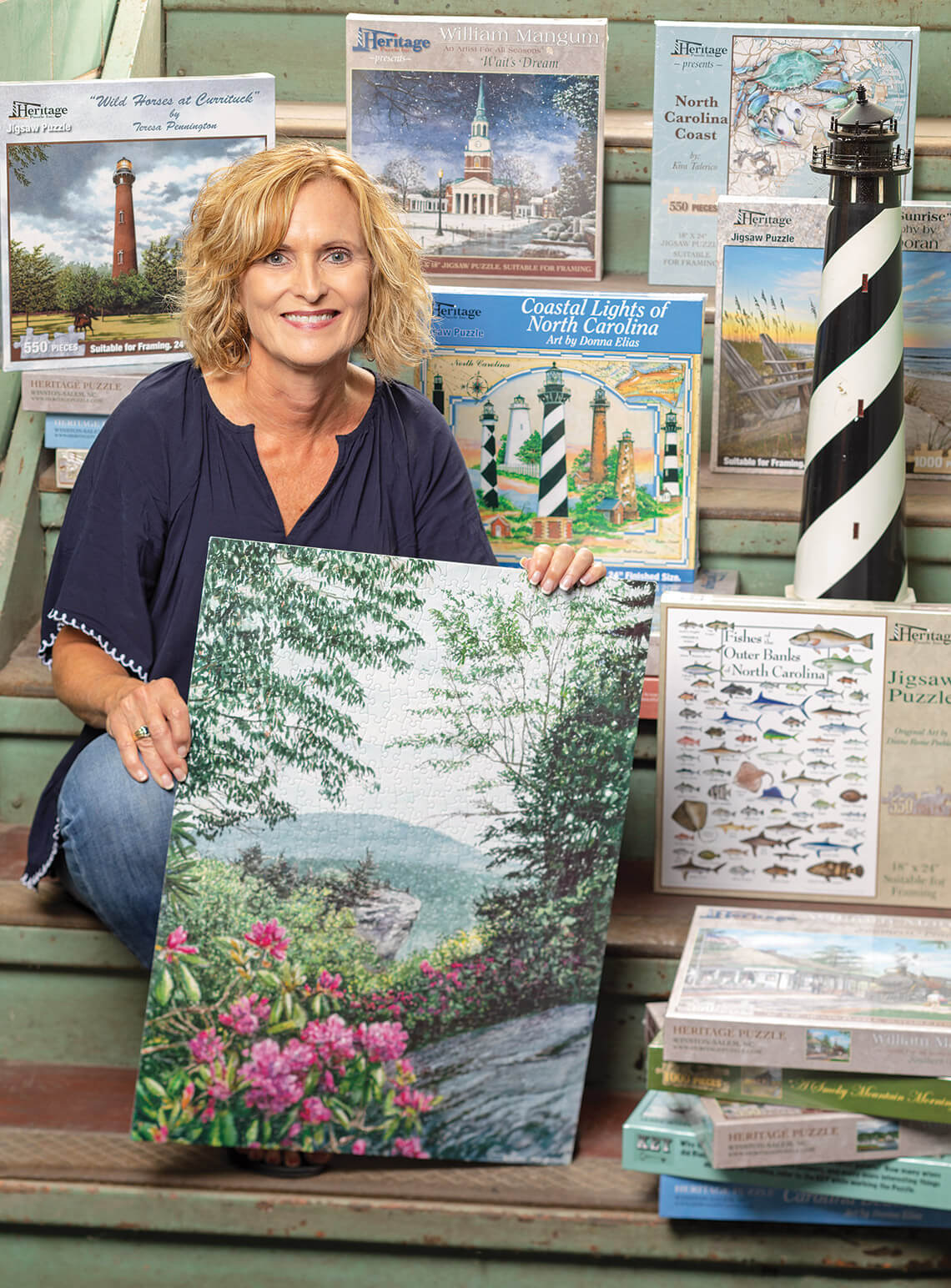 The company’s business model hasn’t changed much since Karen’s husband, Phil, and his father, the late B.K. Everhart, started shipping puzzles to customers more than two decades ago. Here’s how it works: An Everhart (typically Karen) notices a pretty painting or a photograph worthy of a puzzle, or asks an artist to create something specific. Many of the paintings come from well-known North Carolina artists, like William Mangum of Greensboro and Teresa Pennington of Waynesville. Karen once discovered a painting she liked in the house that her family rented on vacation in Florida.

Heritage then secures the proper licensing from the artist and farms out the printing, cutting, and packaging to other U.S.-based companies. Once boxed, the puzzles come home to Winston-Salem and remain in Heritage’s warehouse until an employee ships them to wholesalers and retailers from Florida to Maine, the Great Lakes region to the Texas Gulf Coast. Heritage also ships directly to customers like the Warrens. 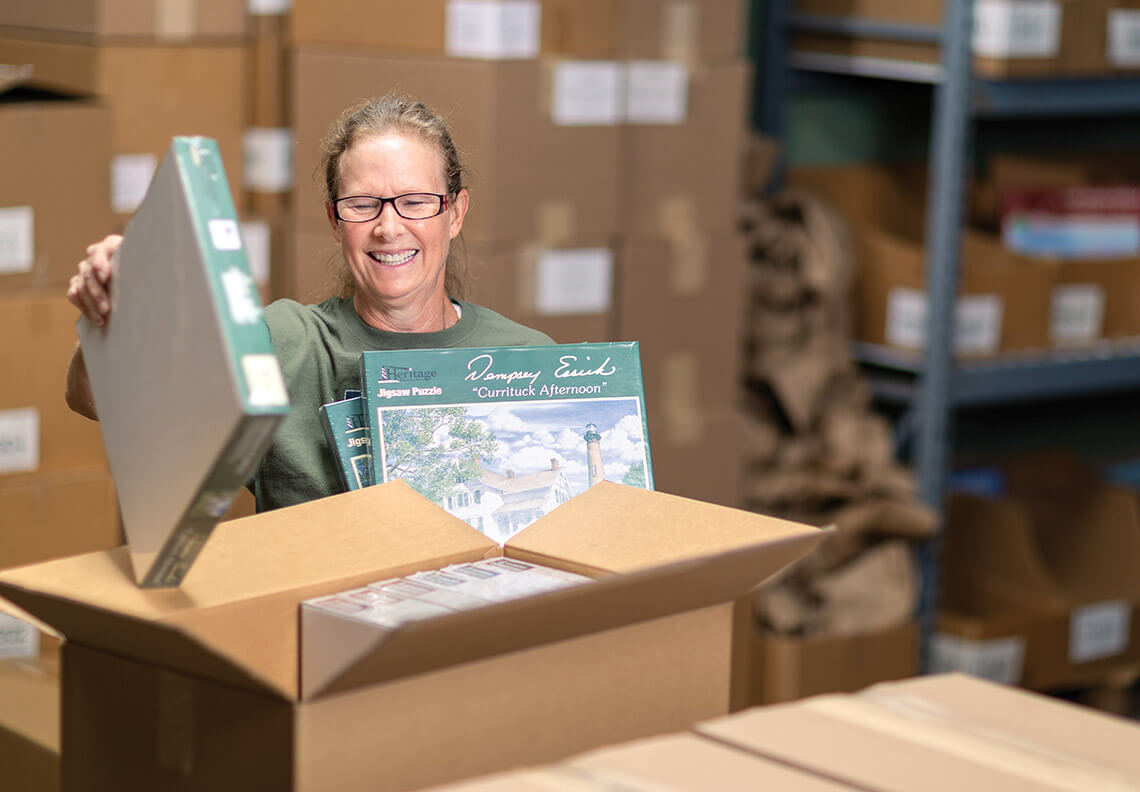 Since the pandemic shutdowns made puzzling more popular than ever, puzzles have been flying off the shelves at Heritage. For example, in 2019, the company sold 120,000 puzzles, making it a good year by anyone’s standards. In 2020, post-shutdown, that number jumped to 180,000. “We were entering orders 14 hours a day,” Karen says. “And everyone packed boxes.”

More recently, supply chain issues have left the crew struggling to meet customer demand. In early fall, with the holidays fast approaching, Heritage had only 75 of its 250 puzzles in stock, an unfortunate turn of events for those looking for the perfect Christmas gift for puzzle aficionados like Betty and John Warren.

On that day early in the pandemic, back before puzzling reached a fever pitch, the Warrens tackled “Hatteras Lighthouse,” a 550-piece Heritage puzzle made from a Mangum painting. It features the Outer Banks beacon on a mostly sunny day, with just a hint of the Atlantic Ocean in the background.

“That one was kind of hard to do,” Betty says, “because all that grass looks alike.” The Warrens conquered the grass in no small part thanks to John’s innate (and heretofore unknown) ability to distinguish even the most subtle shades of a color, and then separate the pieces accordingly. 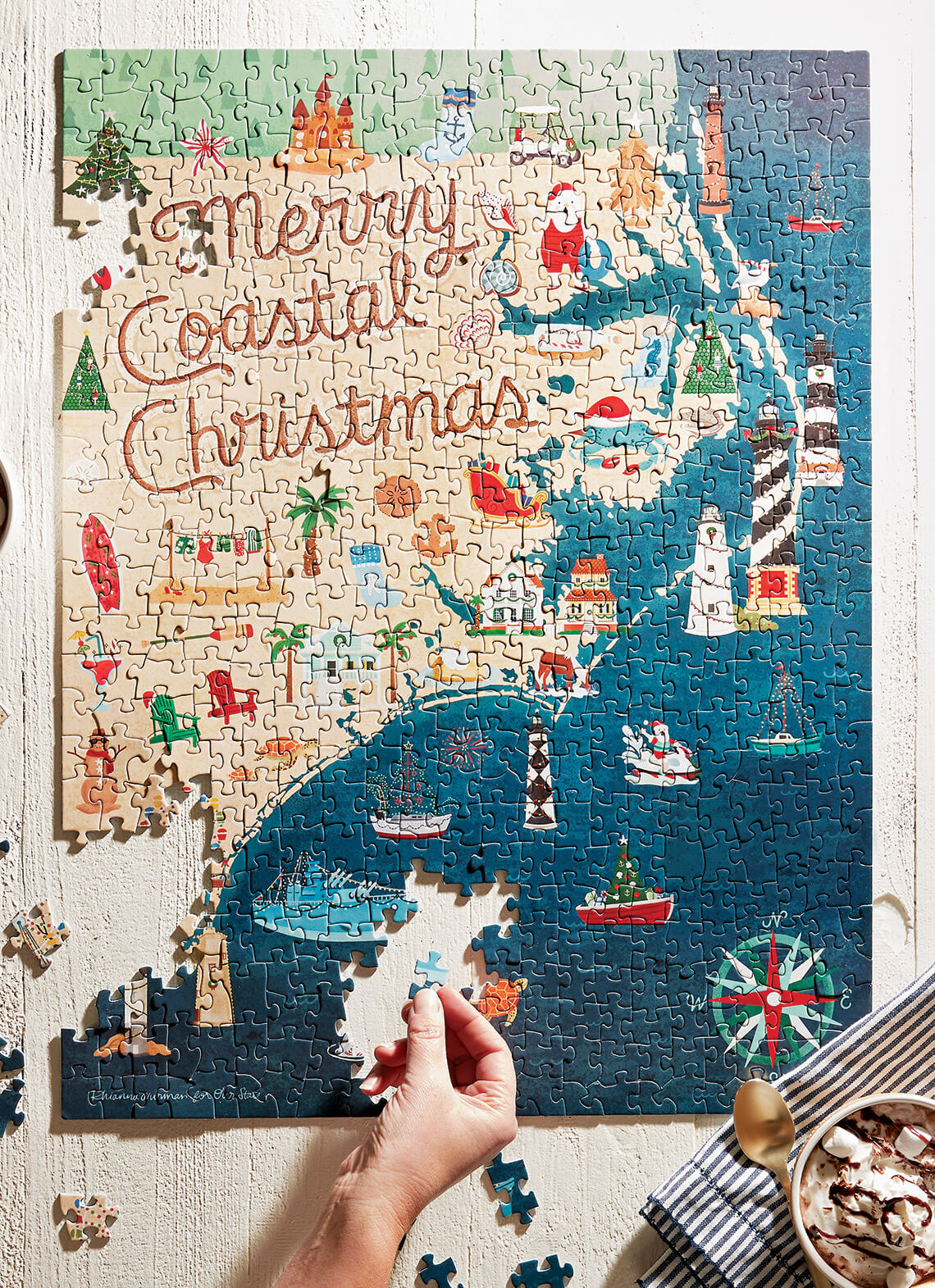 With more hours spent at home this past year, some travel enthusiasts have opted to tour the state one piece at a time by working Heritage Puzzle selections like “North Carolina Coastal Christmas.” photograph by Stacey Van Berkel

“When we got to the point where we couldn’t get anything new, we started redoing some of the ones we’d already done,” Betty says. “We were amazed because they were just as hard to do as they were the first time.” The Warrens aren’t so bored that they’re willing to work the 1,000-piece puzzles. The 550-piecers are their sweet spot, since the segments are large enough for John to pick up on the color variations. Sometimes, Betty prefers to just sit back and watch her husband sort through and find patterns that she failed to recognize. “He’s working on one right now,” she says, and pauses.

“John?” she calls out to her 82-year-old husband in the sunroom. “What’s the name of the one you’re working on?”

“‘Beaches of Florida,’” he responds.

“‘Beaches of Florida,’” she repeats, then describes its image of lounging vacationers. “It’s a caricature. It has a lot of beaches on it, and they’re all familiar.”

These days, Betty awaits the regular updates that she gets from Karen on back orders and new arrivals. She prefers to shop with Heritage to avoid the risk of buying an inferior puzzle. No one knows how long the pandemic will continue, she says, so she and John plan to occupy themselves with quality puzzle journeys until real vacations are possible again.

“Puzzles,” Betty says, “have been a lifesaver.”