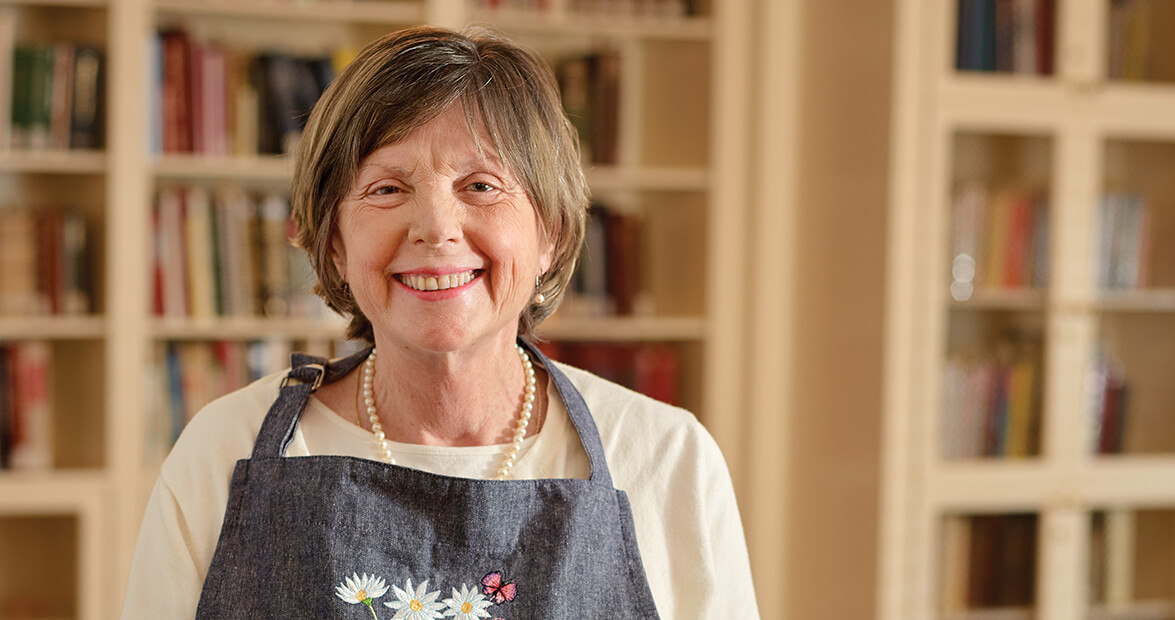 EDITOR’S NOTE: This story was originally published in September 2017 and  updated in March 2018.

Foy Allen Edelman didn’t set out to be a cookbook collector, even as she amassed nearly 1,000 cookbooks, with titles from all over North Carolina. “I wanted a recipe, and a story behind that recipe, from a cook from every county in the state,” Edelman explains. And so she began traveling, county by county, connecting with and contacting friends of friends and their friends, who’d honed recipes throughout the decades and through generations. But she’d show up to meet a particular person, and instead of one cook, she’d find a room full of cooks, full of stories. Word of her quest had gotten out.

Edelman, of Raleigh, is also no stranger to recipes. UNC Press published her Sweet Carolina, a cookbook of cakes, candies, and desserts from around the state, in 2009. In 2015, the press published Edelman’s Carolina Cooks, featuring vegetables and meats. But this goal took on a life of its own, and became personal, because, “What I was bringing back was sort of ethereal — a voice telling a story about food,” she says. “The sociologist in me wanted more. I wanted to know more about the county and food than one person could give me.”

Edelman claims — or blames — her Kinston childhood as motivation for the mission — “internal forces,” she terms it — that took five years to complete. “In eastern North Carolina, people were poor,” she recalls. If they needed something, they went in their shed and made it. And, likewise, their collections consisted of humble items: license plates, pop bottles, fishing lures. And cookbooks. Like many white Southerners born in the segregated 1950s, Edelman was raised by her biological mother and “my African-American mother,” and rarely sat down to a meal with her parents. Her father was a small-town workaholic lawyer, but he’d take Foy (short for Purefoy) along with him on trips to courthouses, where employees would regale her with tales of their county and places to eat, information not found in any travel brochure. Too, the family had relatives in dozens of counties, and on Sundays, they’d drive North Carolina’s back roads for visits. Edelman fell in love with those views of pastures and small farms and scrappy homesteads in every season, and 50 years later, as a “rabid cookbook junkie,” traveling those same roads in her search, she fell in love with North Carolina all over again. 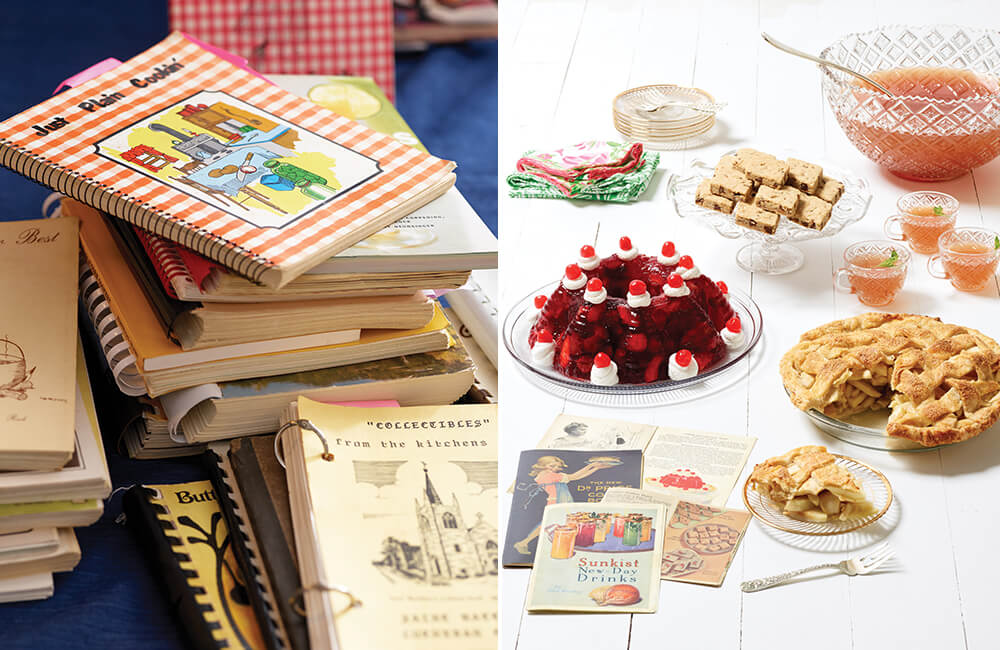 Need a recipe for a Jell-O mold, an apple pie, coffee toffee bars, or cardinal punch? UNCG’s library has a home ec pamphlet for that. photograph by Joey Seawell

First, she narrowed her search to four regions: mountains, Piedmont, inner Coastal Plain, and Tidewater. Then to the counties within each region, and then further, to cookbooks issued by civic organizations — ladies’ auxiliaries, churches, wives of volunteer firemen. In her pursuit, she reached out to and visited historical societies, agricultural extension agents, and libraries. “The cookbooks, never mind the food samples people sent home with me, were a way to relish and embellish the experience,” Edelman rhapsodizes, and while plenty of people claim to read cookbooks like novels, Edelman read the introductions, too, and every page thereafter.

Not surprisingly, cookbooks from the state’s urban areas were easy to find. The extreme northeast quadrant — the Albemarle Sound area — not so much. In the west, separating recipes and cookbooks found in the Qualla Boundary from the general community proved difficult. Then there were regional books, such as Appalachian cooking, or statewide collections, that fell into no particular category. “Debbie Moose’s deviled egg cookbook is a classic on its own,” Edelman says.

One place in North Carolina, though, already had a trove of research materials: the University of North Carolina at Greensboro. The university, which was all-female for many years, honors its institutional memory by acquiring and cataloging books written about, by, and for women — fiction, etiquette, health, child care, law. The New Cyclopedia of Domestic Economy, Sunday Night Suppers, and The Army Wife are typical titles of this remarkable collection open to the public. Before self-help was a bookstore genre, there was Character Development in Successful Families. Volumes are arranged by categories, so Don’t Waste That Fish: Tips on Taking Care of Your Catch is shelved with cookbooks. If you’re looking for one of North Carolina’s oldest published cookbooks, issued soon after the Civil War and titled Mrs. Elliott’s Housewife, you’ll want to know Carolyn Shankle, who oversees Rare Books in the Martha Blakeney Hodges Special Collections and University Archives at UNCG’s Jackson Library.

Edelman fell in love with those views of pastures and small farms and scrappy homesteads.

“Foy was using our collection to find the English style of cooking, the Scottish and Moravian styles and influences, and trying to find how much of that remained in a geographic region,” Shankle says. For her part, Edelman loved her visits, with convenient parking and a pleasant walk across a wide green to reach the old-fashioned comfort of the Special Collections room itself, with its pale yellow walls, wooden display tables, and deep seating. “The room even smells like the past,” she says as a compliment, though she practically went blind reading, say, a palm-size cookbook from England printed in the 1600s, in which every “s” looks like an “f,” and a sample recipe instructs that a knuckle of veal be boiled in a pipkin of water with a spoonful or two of French barley for “sick and convalescent persons.” Edelman marvels, “They were still cooking in ashes!” But the British settled the coastal and Tidewater regions of North Carolina, so the contents very much relate to our foodways.

Name a county, and this collector has a story. For Rutherford, she immediately says, “Chocolate gravy,” and relates the tale of a Rutherford County bride whose grandmother arrived as she was dressing for her wedding, bringing biscuits and chocolate gravy. In Greene County, a local librarian’s mother-in-law joined the search, and she and Edelman became close friends. One 1880 Greenville cookbook survived a house fire, and Edelman treasures its soot-blackened pages. Remember Mrs. Elliott’s Housewife? There, in its pages, was a grandmotherly recipe that Edelman had searched for everywhere: Green Tomato Pie — “Tiny little layers with tomatoes and lemons and flour and sugar and butter; after fish, it’s so perfect,” she says. And more: “People today don’t understand fried chicken like when we were growing up. The chickens were small, and fried in rendered lard. I’m not sure we can reproduce the results these recipes once did.”

One thousand elderly cookbooks require special care, as well as storage space, a tolerant husband, and a dehumidifier chugging 24/7. But Edelman felt an obligation to preserve them. Last year, Carolyn Shankle and the Special Collections became the beneficiary of Edelman’s treasure. A paper trail if ever there was one, some 60 cartons of cookbooks are in the process of being inventoried by Shankle and her team. “We started with the mountains and are up to Iredell in the Piedmont,” she says, gesturing to shelves in the stacks, where county names poke out like miniature flags from spiral-bound volumes.

Here, thick and thin, in humble print with paper covers, are recipes collected by the Stoney Hill Fire Department, the Garner Free Will Baptist Church, and the Edenton Band Parents Association. I reach for the glossy red cover of a 1952 revision of Greensboro’s first Junior League Cookbook — Victuals and Vitamins — and turn without hesitation to Oven Barbecued Chicken. This page isn’t dotted with V-8 juice spills like my tattered copy, but three generations later, I wouldn’t think of cooking barbecued chicken any other way than smothered in onions and soaked in a thin, red, vinegary sauce.

If Edelman has a regret, it’s that the county-by-county collection isn’t complete. There are gaps, waiting to be filled [see sidebar]. And she cites as “tragic” the fact that the collection contains fewer than 20 volumes of cookbooks by African-Americans: “We have more by men, by Native Americans, by Moravian churches,” she says.

Still, “What a gift,” Edelman says, speaking not only of her donation, but also of the library’s Special Collections. “Because we know the names of the people that came before us, but often not a lot else.” This historic advice, and food, and way of living, fell through the centuries, hand after hand, like a thread, and is available to all of us who share, well, a hunger to know.

Want to be a part of this special mission?

After five years and thousands of hours spent at auctions, yard sales, and with cooks and book dealers, Edelman’s — and now UNCG’s — collection is still missing any cookbook whatsoever from the following counties: Alexander, Camden, Gates, Graham, Hoke, Polk, and Tyrrell. Counties with only one representative cookbook are Alleghany, Avery, Clay, Columbus, Henderson, Hertford, Jones, Madison, Mitchell, Northampton, Person, Richmond, Swain, Union, and Yancey. If you own or know of a community book of recipes you’re willing to part with, or track down for posterity and the enjoyment of others, contact Carolyn Shankle at (336) 256-1227 or carolyn_shankle@uncg.edu.