Take a stroll past colorful murals and historic landmarks, eat incredible brisket, sip a milkshake at a soda shop, and more in this vibrant downtown in Alamance County.

On the side of a brick building in downtown Graham’s Court Square, black block letters spell out “Love Always Wins” against a blue, pink, and yellow background. At the bottom, a painted little girl stands on a stack of books and reaches up, touching the message. 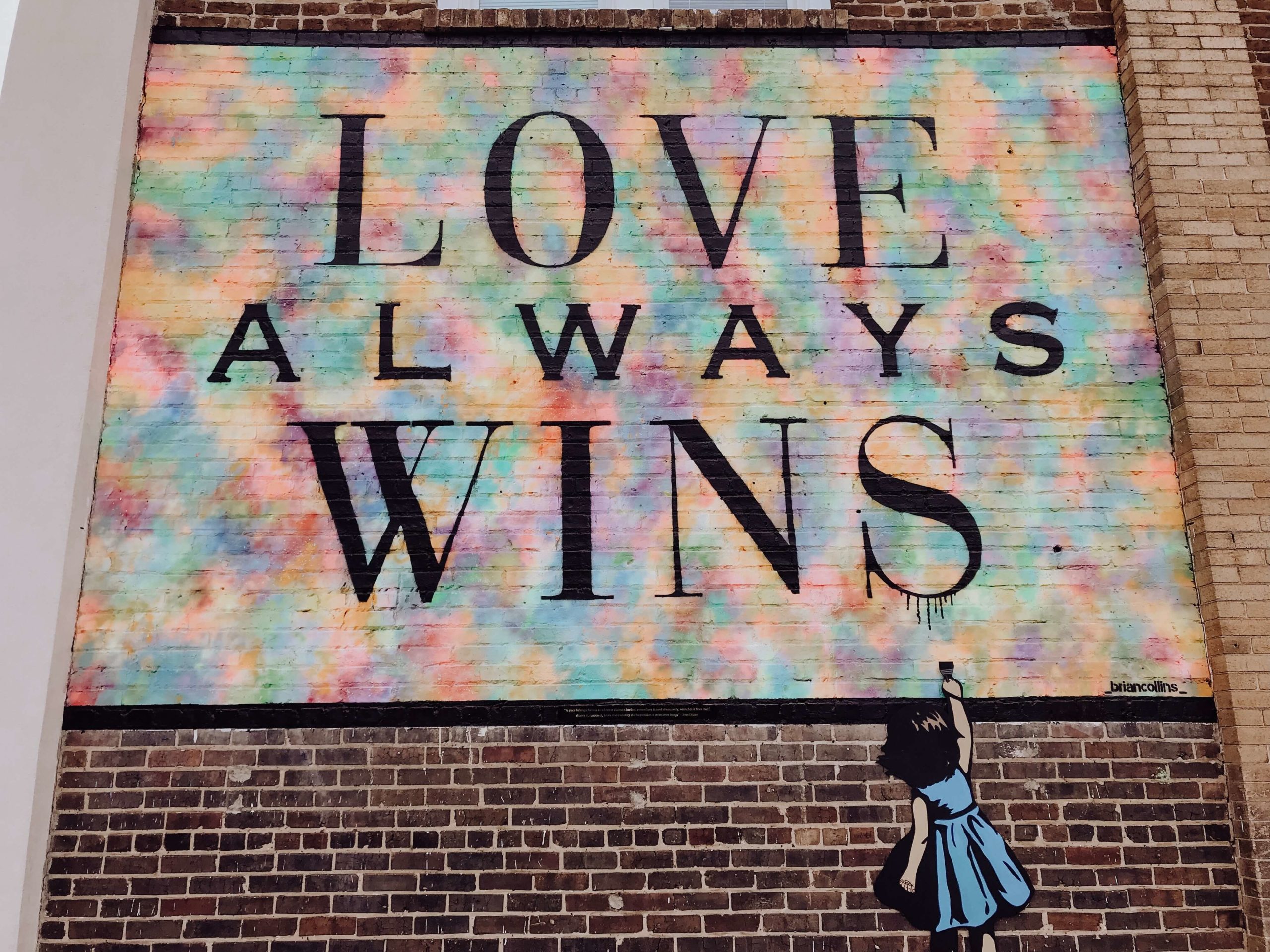 An additional person will be added to the Love Always Wins mural each year. photograph by Alamance County Visitors Bureau/Motley Studio

According to Jason Cox, a local entrepreneur who commissioned the aspirational artwork by Brian Collins, the plan is for local artists to add an additional painted person to the mural each year at the town’s annual Love Graham festival.

The Love Always Wins mural is one of several brushed onto Graham’s buildings in the last few years. Another downtown mural reads “Love, Graham” on a bed of painted flowers, and still another — painted by people in the community on the Colonial Hardware store — spells out “You Belong Here” amid a bouquet of hearts.

Take the time to veer off the beaten path and explore Alamance County. Our towns offer surprises at every turn. Whether it’s an adventurous weekend away or if you are seeking to relax, we are ready to see you. 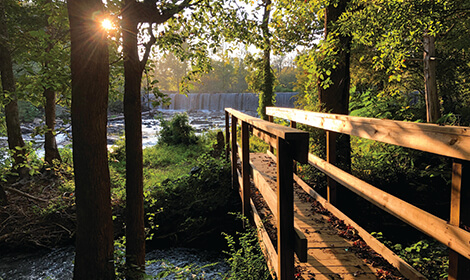 “The message is inclusivity,” says Mary Faucette, the downtown development coordinator for Graham. “‘You Belong Here’ is the positive energy of Graham; it’s a positive trajectory of welcoming all. We’re a community that’s growing and evolving, not just a community of what has always been.”

Positioned strategically downtown, Graham’s murals invite visitors to enjoy the city, its art, architecture, and food. Come spend a day here and experience the best of this quaint Alamance County town in the heart of North Carolina.

When Jane Albright, the celebrated former women’s college basketball coach, took a walk in Graham during a visit to her hometown, she saw that the two Christian bookstores she frequented during her childhood no longer existed. So in 2019, she decided to open Things Above Bookstore and Coffee House. A self-described bookaholic (who doesn’t drink coffee herself), Albright sells books, bibles, and gifts, in addition to caffeinated beverages.

From its home on West Elm Street, Roasted Coffee Depot serves piping hot teas and lattes alongside refreshing cold brew and Italian sodas. Order the house latte — flavored with hazelnut and vanilla — and a locally sourced baked good (we like the cinnamon rolls), and then browse the eclectic gift shop for a locally made mug.

Take a walking tour of local art and architecture

With Court Square at its center, Graham is a small, walkable town. To get a lay of the land and a feel for its history, start with a one-mile walk from the east entrance of Sesquicentennial Park, which surrounds the 1924 courthouse. As you meander north on Main Street toward Harden Street — and on the streets radiating from the square — bronze medallions in the sidewalk direct you to notable landmarks.

Crossing over to the east side of the street and back down on Main Street, you’ll reach the Graham Cinema, a 1928 art deco movie palace that still shows films. Further south on Northeast Court Square, you can take in the Vestal Hotel, a historic landmark built in 1904. The building now houses the Graham Soda Shop, famous for its hamburgers, fries, hot dogs, and milkshakes.

Head west on Elm Street to see the structure that now houses the Graham Historical Museum, built a decade after the Vestal Hotel as the Graham Fire Department Building and created in the Italian Renaissance style. In 2000, the building underwent major renovations before the first floor became the museum.

Don’t miss the Alamance Arts building on Main Street: In 1873, cotton textile owner Edwin Michael Holt built the symmetrical Queen Anne Revival-style house for his daughter and son-in-law, a captain in the Confederate Army. With a mission to shape the cultural identity of the county by making art a tangible presence for its citizens, Alamance Arts offers a diversity of programming and education, from virtual family fun and barn quilt painting to community dance. Stop in to see an exhibition of artwork by Julia Chandler Lawing from May 17 through October 16. 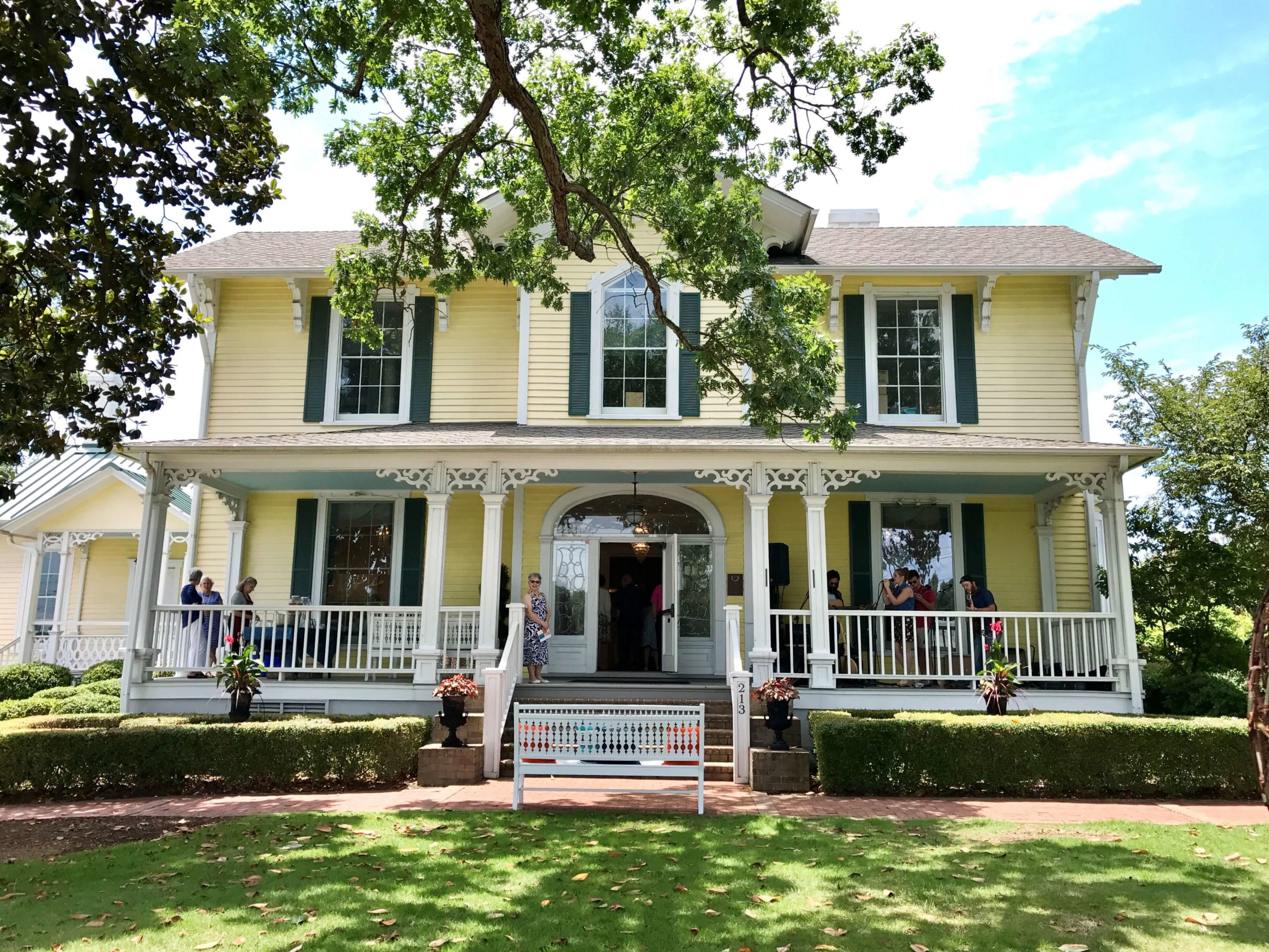 The Alamance Arts building on Main Street is a symmetrical Queen Anne Revival-style house built in 1873. photograph by Alamance Arts

Before continuing on, pause for a moment at the Embracing Peace statue out front by J. Seward Johnson. Johnson modeled the 26-foot bronze sculpture after Alfred Eisenstaedt’s photograph of a sailor kissing a nurse on V-J Day in August of 1945.

After your walk around town, Graham offers several options for a hoppy refreshment. Forgotten Road Ales, owned by veterans Ben and his wife, Janée Farrar — both certified cicerones — specializes in barrel-aged beers, wild and sour beers, and hazy IPAs. Or try HiFi Records, where owner Jon Guza will gladly pour you a craft beer or wine while you explore his collection of vinyls. You may even catch a live music performance. 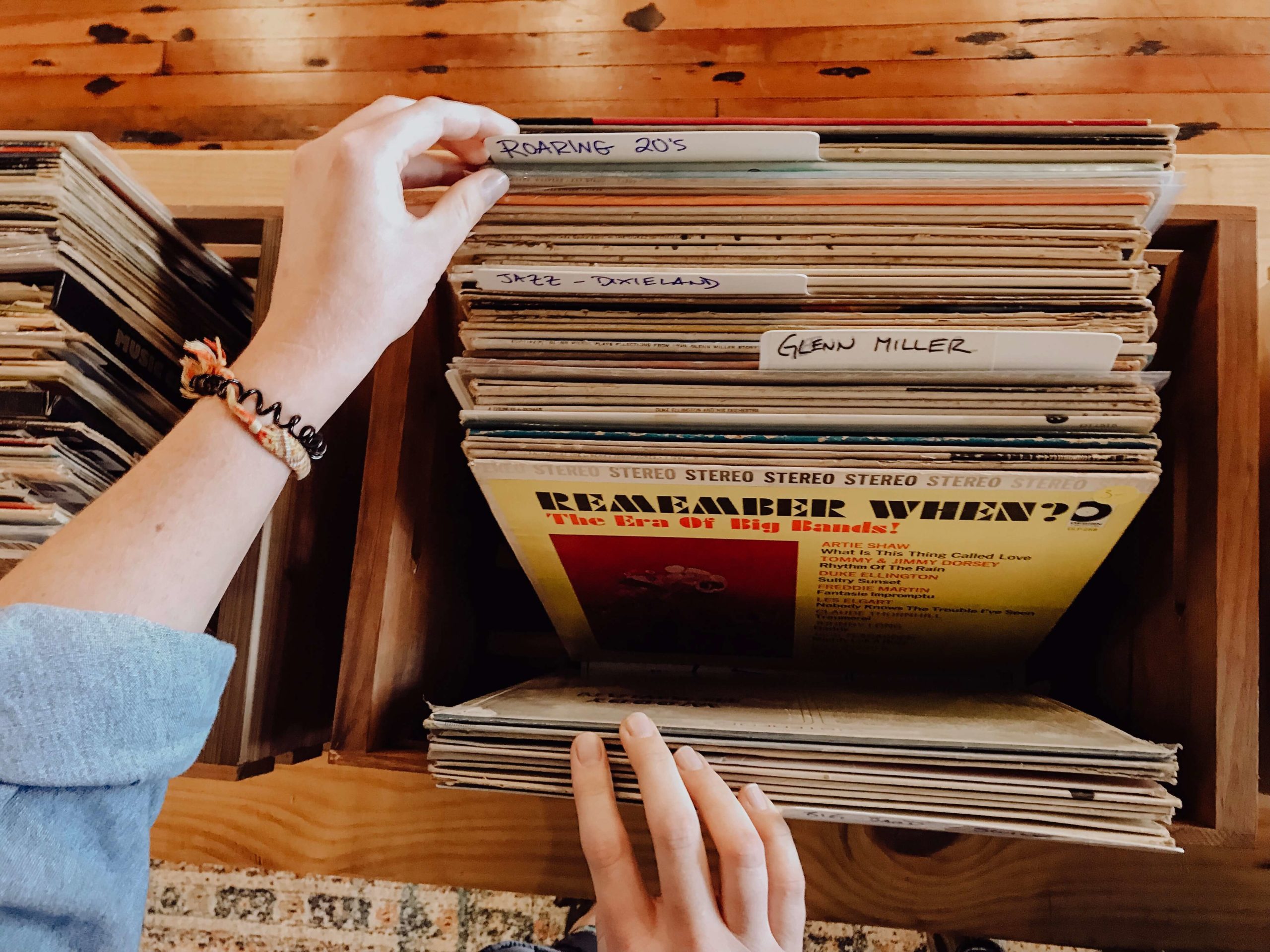 Sip on a craft beer or wine while exploring the collection of vinyls at HiFi Records. photograph by Alamance County Visitors Bureau/Motley Studio

The irresistible aroma of smoked prime brisket may lure you into the Smokehouse at Steve’s. “Brisket is one of the most challenging items on any menu to execute properly,” says Justin Long, who runs the restaurant with his wife, Meagan. “There’s a simplistic beauty to it, and when done correctly, it’s fantastic. We take great pride in our craft and have created a product that I’m very proud of.” 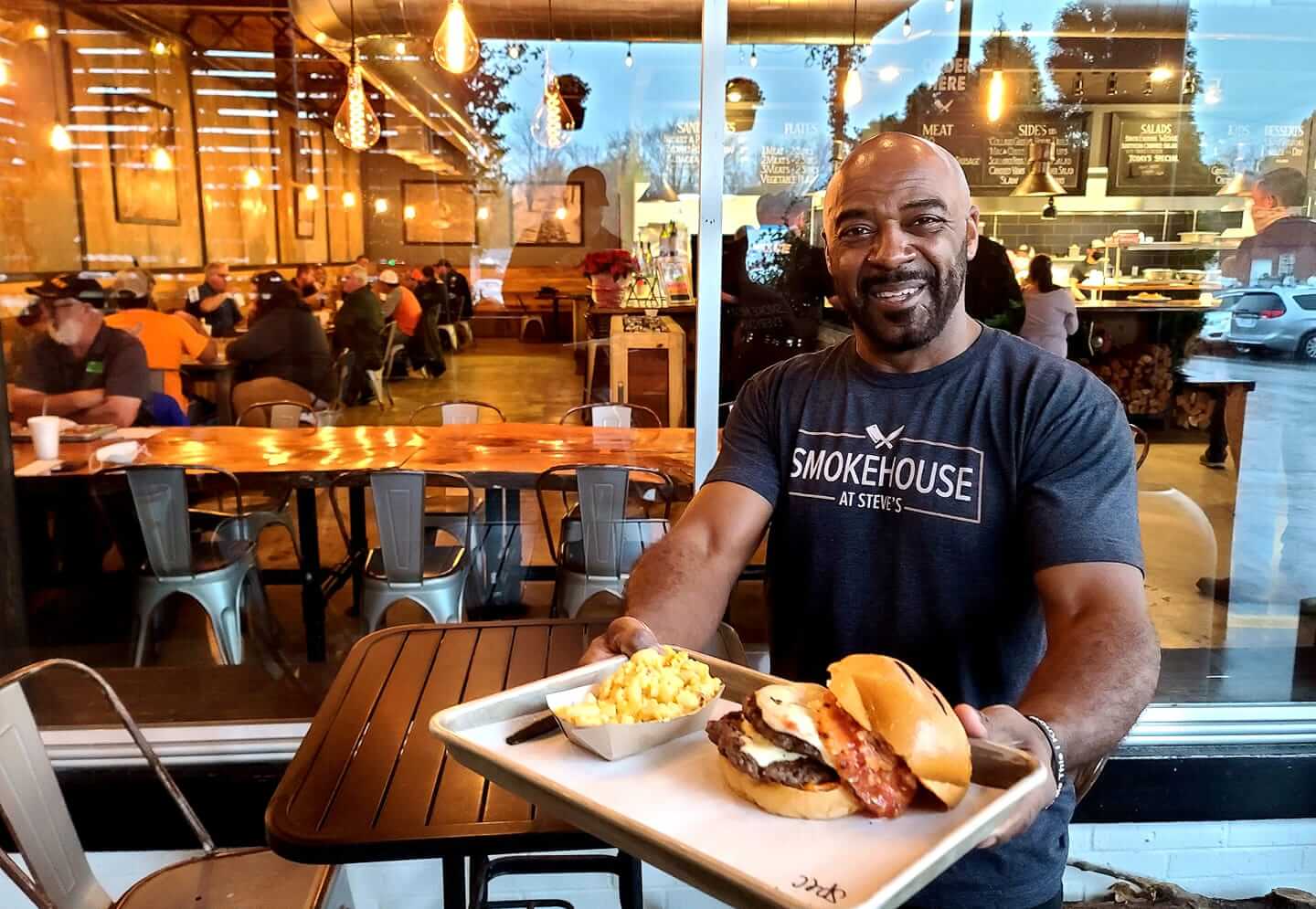 If you’re hungry for a burger, check out the District Court Burger at the Verdict on the Square, a popular spot near the courthouse that features foods with a legal theme.

Exploring with kids? Powercade Arcade + Bar offers drinks and games, like skee ball and boxer, along with karaoke. You can even order a mocktail for the smaller set.

Cap your day in Graham with a drink at the local cocktail bar Fitzgerald & Faulkner. A “Southern cocktail haunt,” it boasts delicious beverages served in an intimate setting — don’t worry, you can still wear your ball cap and jeans. Named for writers F. Scott Fitzgerald and William Faulkner, the restaurant carries its literary theme to its menu, which is broken down into chapters. On most nights, you can catch customers sipping boulevardiers from coupe glasses. 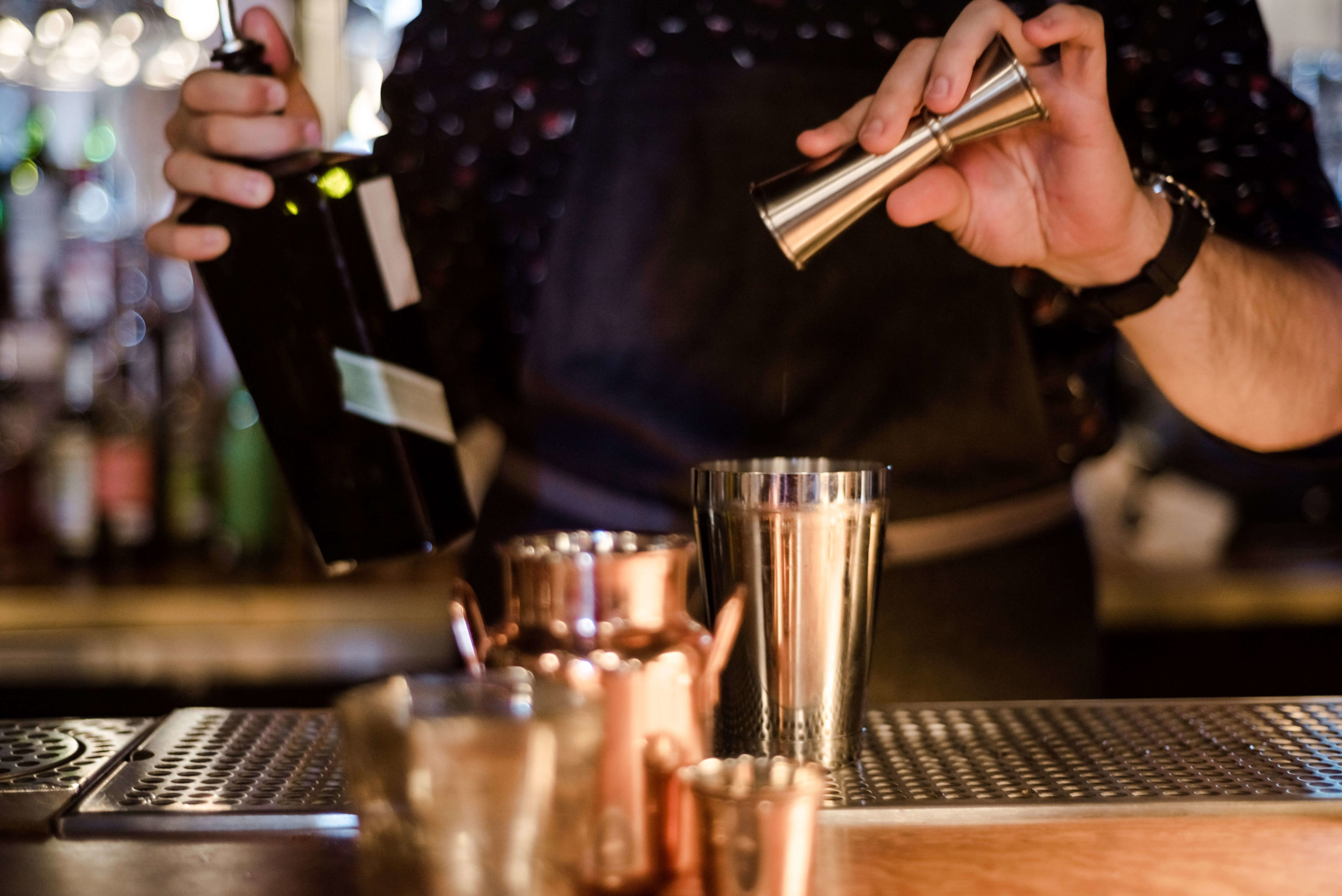 Owner Jason Cox appreciates the success of the bar and its surrounding arts scene. “My hope for the future of Graham is that we continue to do a good job of both enjoying some of the old — the original that makes downtown unique,” he adds, “alongside continued growth and evolution.”