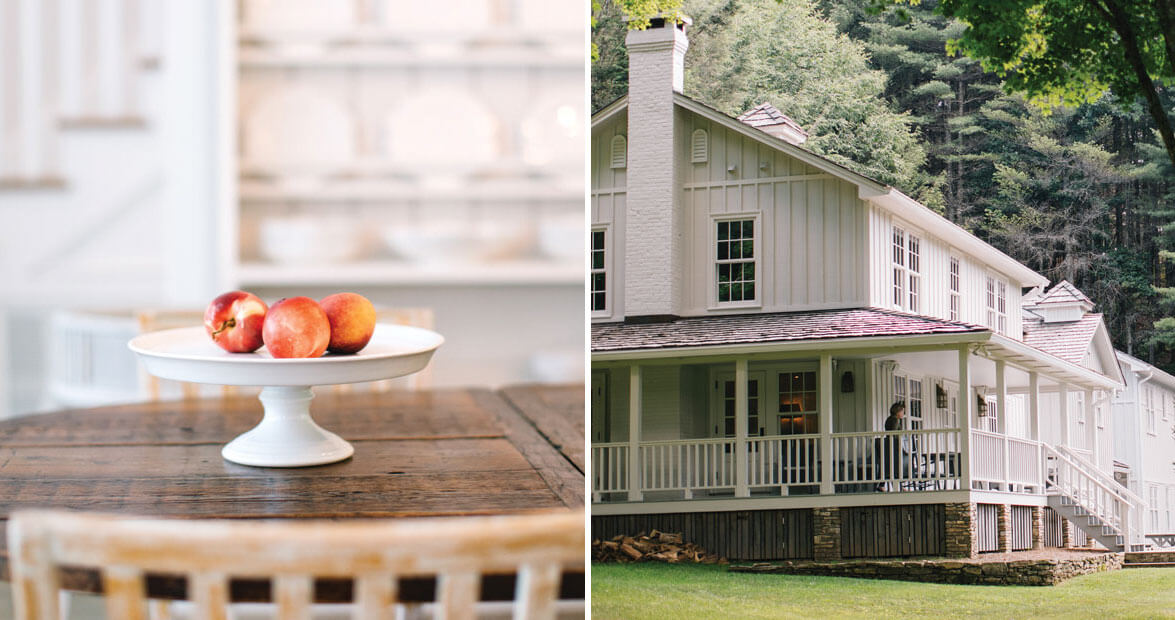 Simplicity is complicated. For most of us, anyway. If it weren’t, we wouldn’t need so many decluttering gurus, not to mention all those huge plastic storage bins. Life pared down to orderly beauty and exquisite essentials is the stuff of daydreams now — and Instagram goals. And weekend getaways, too, if you know where to go.

Follow the squiggly road through Valle Crucis, past the original Mast General Store, a lavender farm, a jerky depot, and a church or two, and you’ll come upon a small pond, where ducks wet their feet and deer pause for a drink. Set back near the woods is the six-bedroom Inn at Little Pond Farm, a board-and-batten farmhouse painted a soothing shade called Repose Gray. Here, owners Gaye and Frank Luaces have elevated simplicity to a form of modern luxury.

“I’ve wanted to do this since I was 20,” says Gaye, 71, an interior-designer-turned-jewelry-designer and, now, innkeeper. “I always wanted to create a place that gives people an experience.” Which is not to say that guests must do anything. Quite the opposite. She wants folks to relax. Stroll up the wooded hill crisscrossed with creeks and laurel thickets shaded by huge hemlocks, spruces, and white pines. Sip wine on the porch or settle down with a novel inside, where every room is influenced by the calm, airy spaces and natural materials found in Scandinavian design. The French oak floors were imported from Provence — much of the furniture, fabrics, and linens come from France and Belgium. Rooms are muted shades of gray, white, and cream. In the hallway, a hint of fresh lavender drifts toward the guest rooms. This is not a squeaky-staircase-and-brooding-nooks kind of place.

“My style has been my style has been my style from the beginning,” Gaye says. Her mother and Italian grandparents inspired her affinity for “simple and classic” lines. They encouraged her to find beauty even in everyday objects. “Look at that color. That shape,” her grandfather would say. “There isn’t a more valuable gift you could give children,” Gaye says, “than an appreciation for the beauty all around them.” That philosophy is alive and well at the inn, where guests find simple pleasures beautifully rendered at every turn. 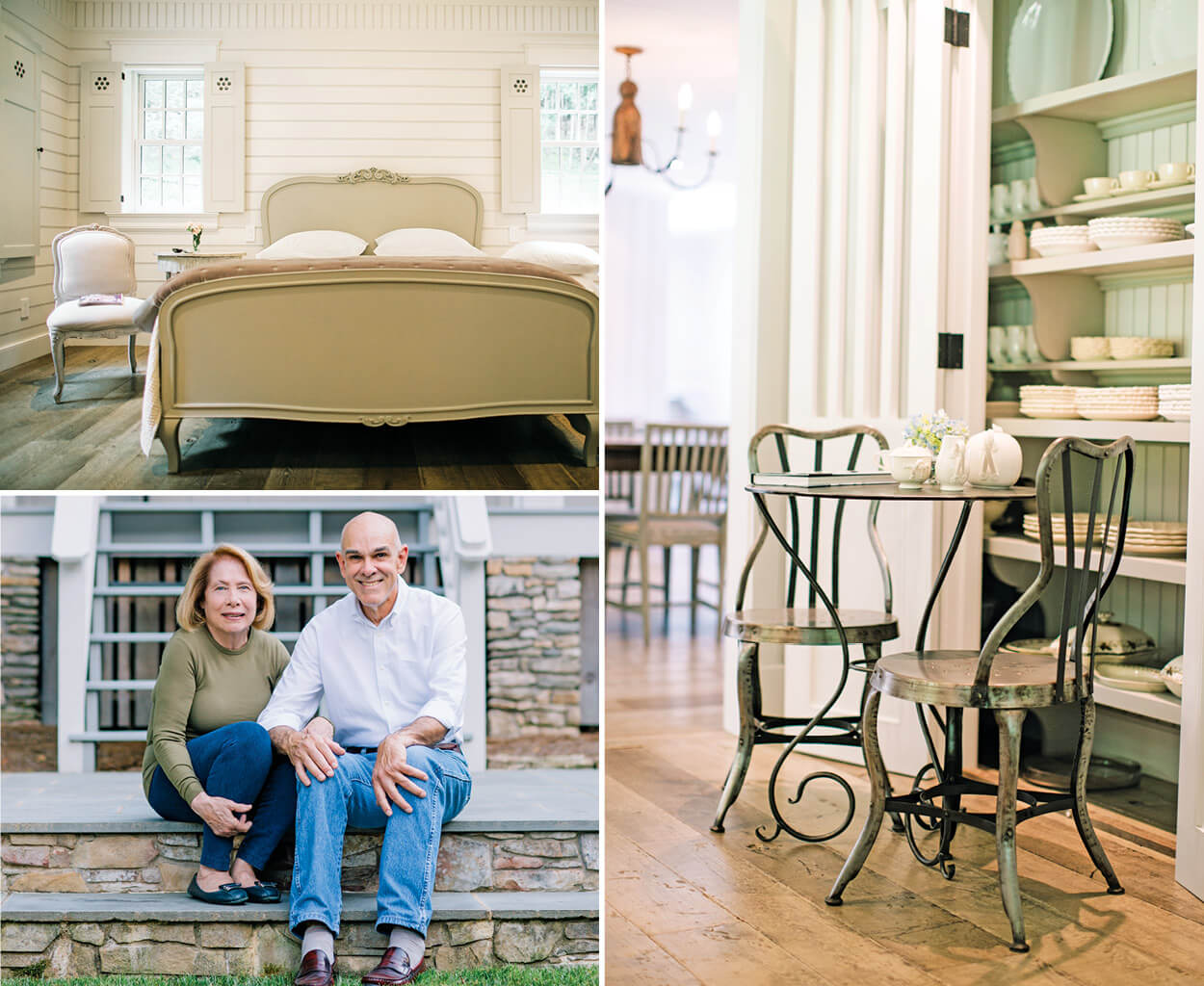 Owners Gaye and Frank Luaces imported most of the inn’s furniture and linens from France and Belgium. The airy design and serene color scheme echo Swedish design. photograph by Revival Creatives

“It was love at first voice,” Gaye says standing in the inn’s bright, open kitchen, carefully drying a teacup. She had called Frank to build cabinetry for her jewelry shop in Miami — and that was that. Frank laughs, burying his face in his hands. He glances over at her with sheepish, kind eyes, and she beams. Apparently, the affection between them hasn’t dimmed, even after 23 years of marriage.

Before they opened the inn, they studied up on how to run the business together. “One of the things you learn is that the divorce rate is high among married owners,” Gaye says. She and Frank have that part figured out: They’re both perfectionists.

They spent six years searching North Carolina for the ideal spot for their inn, and finally found it on this property, a former Christmas tree farm with a ramshackle farmhouse built in the early 1900s. They cleared a minefield of old tree stumps to build an addition and a carriage house. For eight years, Frank worked on the farmhouse, his beloved gray poodle named Little (the inn is named for him) at his side. The remodel was so extensive that Frank could stand in the subfloor and see bright blue sky through the shell of roof beams that remained.

Even so, the house still carries some recognizable glimmer of its former self. “People come by to tell us that they, or their relatives, were born in this house,” Gaye says. “Its history follows it. But I’m not sure all of them could have been born here.”

Frank, a master cabinetmaker, learned carpentry from his father, who fled Cuba after the revolution and built a successful cabinetry business in Miami. “This whole place is full of little secrets,” he whispers, tapping the window shutters. He embedded tiny magnets inside so that they won’t pop open — as wooden shutters do. Shelf bracing is cleverly hidden. The woodwork is stunning. “I dare you to find a nailhead anywhere,” he says. All of this — every cabinet, every piece of molding — was hand-created. Each spring, he and Gaye paint every scratch, tighten every hinge, buff away every scuff. “I walk around for weeks with a caulk gun,” Gaye says, laughing. 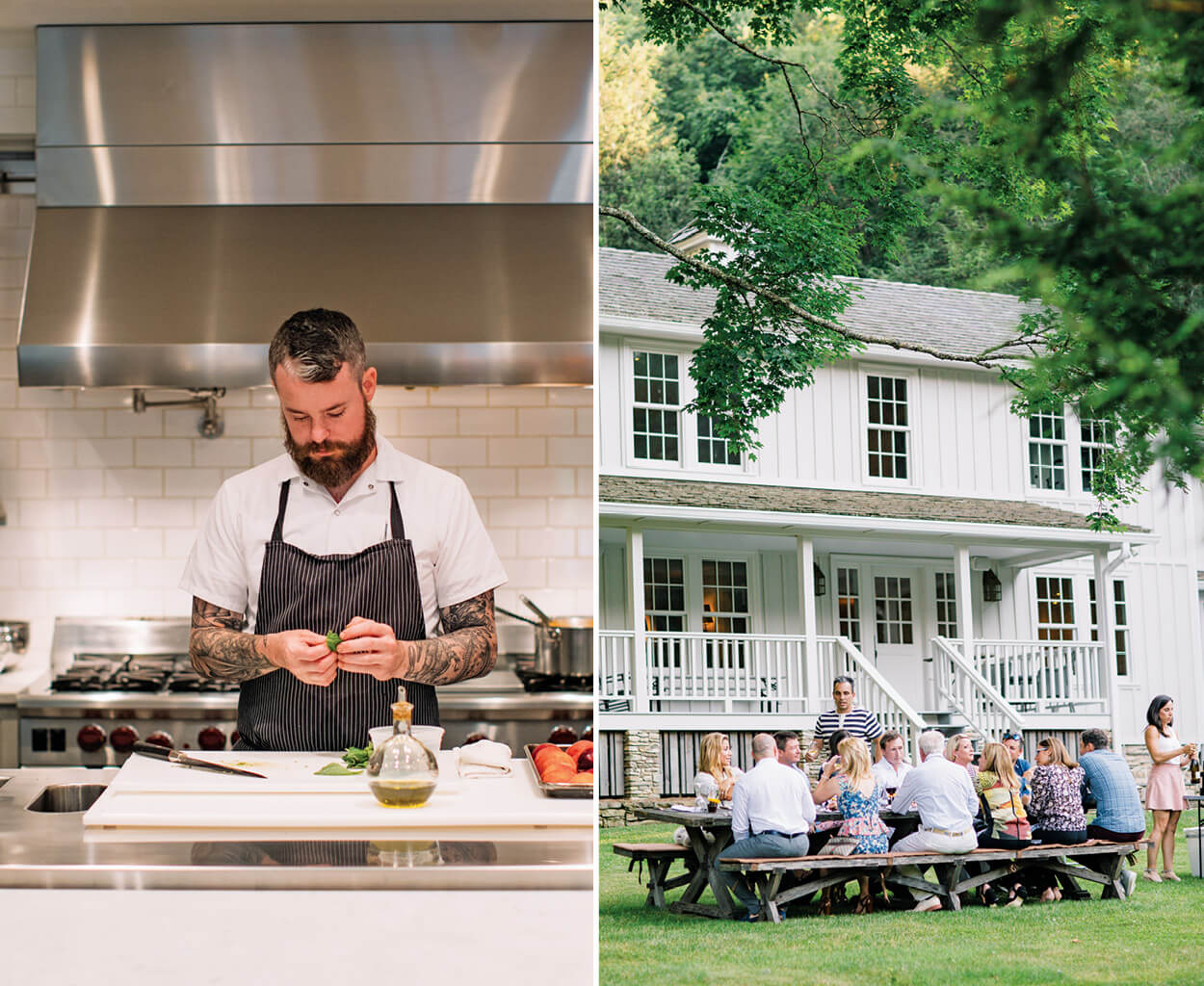 If Frank is the builder, the fixer, Gaye is the curator, the caretaker: tending to guests, planning events, and creating wedding weekends — from the flowers to the catering. She studies cookbooks from her favorite culinary regions — the south of France, coastal Spain, Tuscany, and Napa Valley — to create the inn’s evening menu, prepared by the chef in an open kitchen. At these “cooking class dinners,” guests dine casually around the kitchen table, consulting printed menu cards and peppering the chef with questions. Gaye and Frank dip in and out of the scene, adding bits of history about the house, serving plates, and topping off wine. Really, it’s a cozy dinner party. Strangers at cocktail hour are trading phone numbers by dessert. The inn draws so many like-minded souls that Gaye and Frank host annual culinary trips — to France, Italy, and Spain — for groups of Little Pond Farm visitors and their friends.

On the porch one spring night before dinner, Frank mentions that a favorite repeat guest recently passed away. “He was supposed to be here the day after tomorrow,” he says. The surround-sound of tree frogs fills the silence.

“They become our friends,” Gaye says. “People are so nice. They send us notes — I have this stack of lovely thank-you notes. They’re thanking us, but we should be thanking them.” After all, a simply gorgeous farmhouse is meant to be shared.