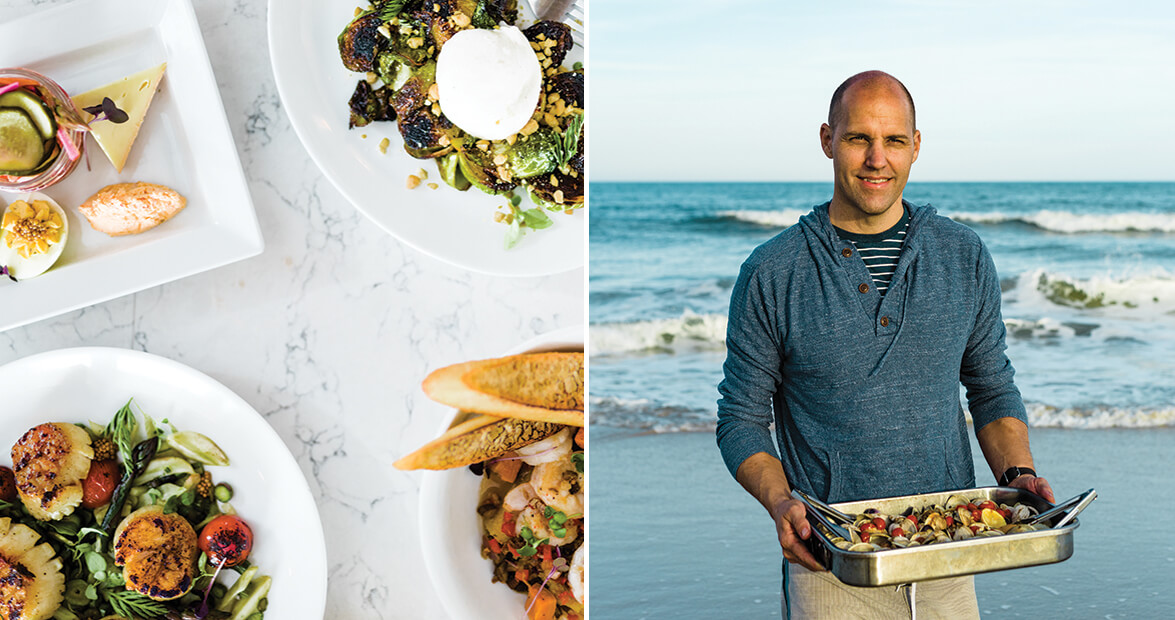 Staff meetings don’t usually include sun, sand, and surf. But if your boss is Craig Love, chef and owner of Surf House Oyster Bar + Surf Camp in Carolina Beach, that’s what you can expect. From April until the weather turns too cold, surfing is as much a part of the Surf House’s kitchen culture as the boat-to-fork menu. If the waves are breaking, Love and any member of his staff might grab a board from the stash kept in the restaurant’s office and head down to the beach three blocks away to surf for an hour. (That’s about as long as a line cook has between when the French fries are set out to dry and when they have to be blanched.)

Several times a summer, when the restaurant is closed, Love hosts a surf day and beach cookout for his staff. They load up their four-wheel-drive trucks with boards, beach chairs, and coolers stocked with everything they’ll need for a sunny afternoon by the sea. More often than not, they head to Freeman Park on the northern end of the island. Love sets up his wood-fired grill in the sand, and the feast is on: beer-steamed clams with roasted cherry tomatoes and garlic; grilled shrimp with corn, chorizo, and basil-lime butter; seared grouper slathered with pesto; grilled baguette slices; and a salad of charred red cabbage, blistered tomatoes, and pickled vegetables. 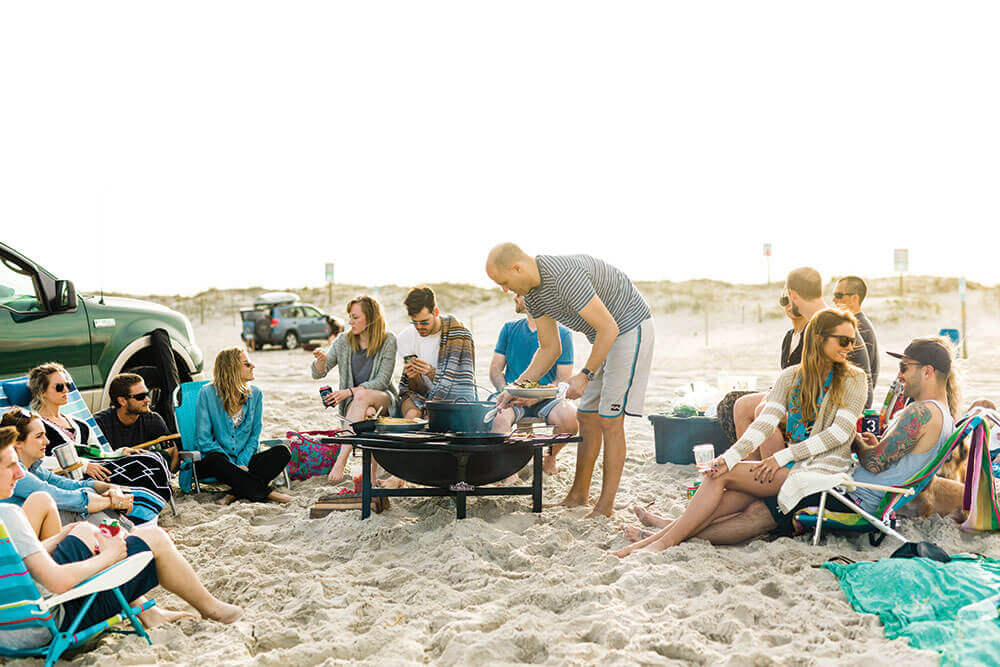 Craig Love (standing) dishes out a taste of summer for his staff. photograph by Baxter Miller & Ryan Stancil

“It will be just before sunset. Half of us are in the water. Half of us are on the beach. There are kids and dogs,” says Phil Castelluzzo, the wine director at Surf House. “It doesn’t matter what else has happened. Everyone always has a smile on their face.”

The surf-loving ethos isn’t surprising if you know Love’s path to Carolina Beach. He grew up in Richmond, and as a teenager, he would skip school to head to Virginia Beach, where he was first exposed to surfing. His seven-year college journey brought him to Wilmington in 1999, where he ended up working at the beloved but now-closed Caffe Phoenix. There, he fell in love with restaurant work — which, as it turned out, is not that different from surfing.

For Love, surfing is best when all the elements come together (wind, time, consistent waves), and cooking on a line in the kitchen is the same: It’s best when the front of the house and the kitchen are in sync. There’s a rhythm to a good night in a restaurant. Reservations are evenly spaced out over the course of the evening. Tickets are fired at the right time, so as not to overwhelm the line cooks. “When it’s all working well together, you get the same sense of satisfaction,” Love says. 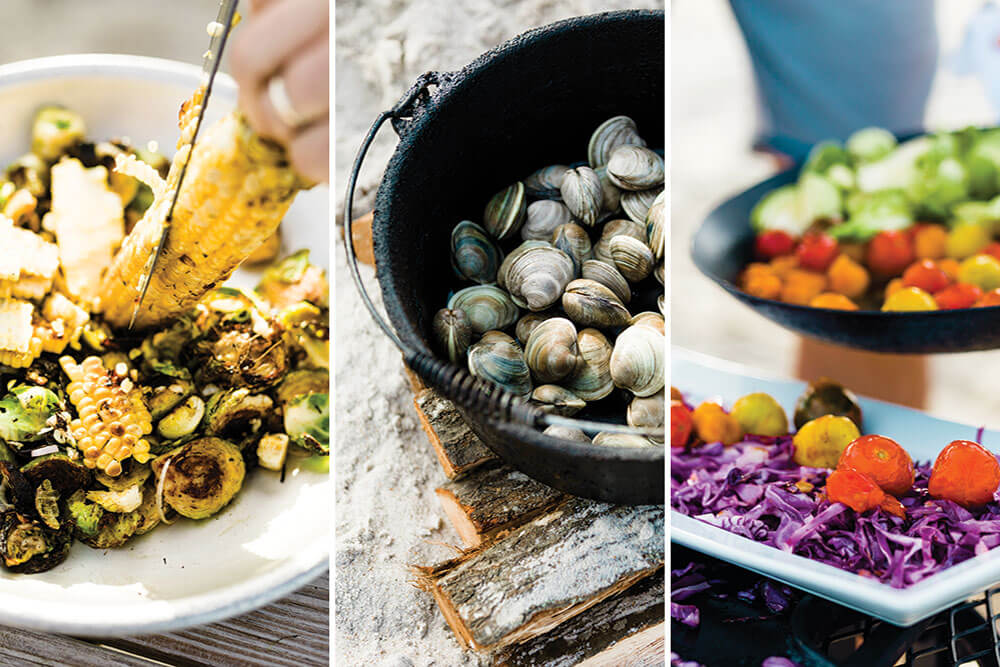 After four years in Wilmington, Love began his culinary education in earnest, spending three years at Cancan, a well-regarded French brasserie in Richmond, and a short stint at New York’s Gramercy Tavern. Eventually, the beach life called to him, and he moved to Carolina Beach.

When Love opened Surf House in 2009, it was actually a café — serving well-crafted sandwiches, salads, and soups — as well as a surf shop. In fact, Annalee Berry, now the restaurant’s general manager, remembers having to answer questions during her initial job interview about how to recommend surfboards to people. It wasn’t uncommon in those early days for a sign to appear on the door that said: “Sorry, we’re closed for a board meeting. Be back in a few hours.” Eventually, the surf shop business took a hit from online retailers, and Love remodeled the space to be a dinner-only upscale restaurant, which has done well enough to stay open year-round. 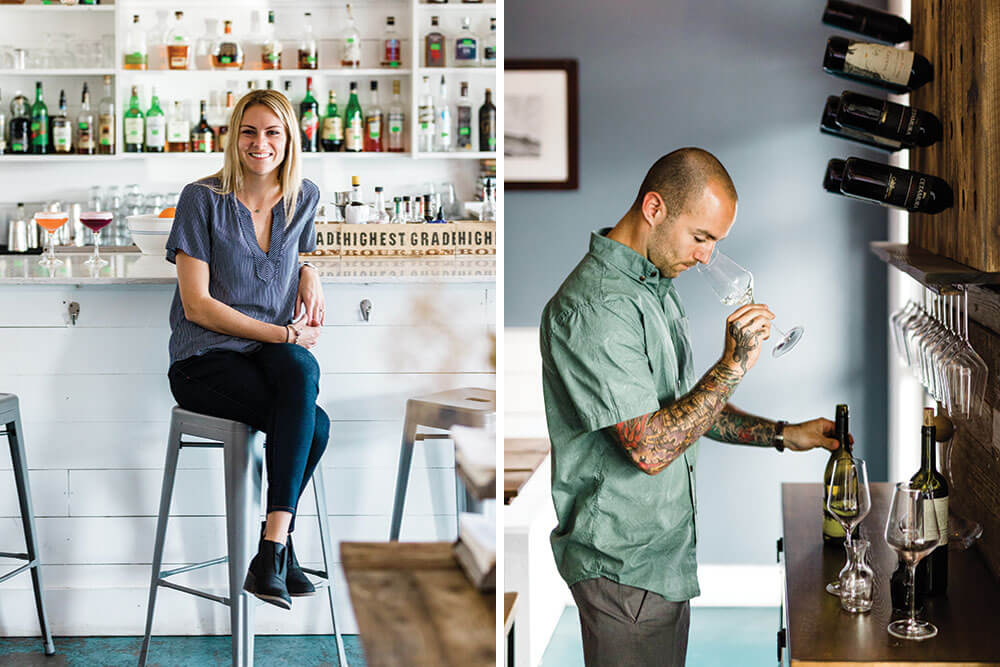 General Manager Annalee Berry and Wine Director Phil Castelluzzo focus on pre-dinner details. The digits on the wall and elsewhere are a nod to the jersey numbers that surfers wore in competitions in the ’60s. photograph by Baxter Miller & Ryan Stancil

Even without a surf shop, Surf House attracted a staff of surfers. Berry grew up in Carolina Beach and has been surfing since she was a high school freshman. Gregory Ewan, the bar manager, grew up in Raleigh, but he and his friends would get up early on Saturday mornings to drive to Wrightsville Beach and be surfing at Johnnie Mercer’s Pier by sunrise. Then there’s Castelluzzo, the wine director, who grew up in New Jersey surf culture. His love of surfing took him all over Mexico, Central America, and the Caribbean. He spent two years in Puerto Rico, running a smoothie and acai bowl stand for a family whose daughter, Quincy Davis, is a professional surfer. “I took surfing a little too seriously for about five years,” Castelluzzo explains.

Love is convinced that his staff ’s love of surfing makes his restaurant better. “There’s that ‘aloha spirit’ in the culture of surfing,” he says. “All of them have connected that to the hospitality we offer at the restaurant.” 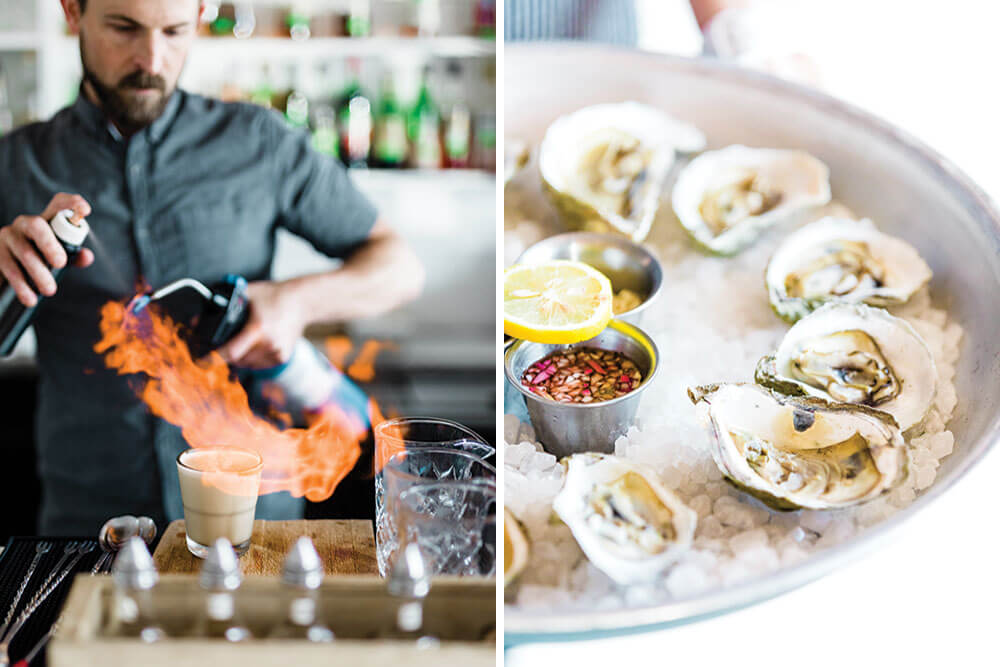 Signature cocktails like Greg Ewan’s “How to Make a Fire” and oysters on the half shell fuel a lively bar scene at the Surf House. photograph by Baxter Miller & Ryan Stancil

And his surf-loving regulars have been generous as a result. On the walls in the Surf House’s dining room are three surfboards, either loans or gifts from regular customers. There’s a potato chip board made by Robert August, one of the stars of The Endless Summer. There’s a classic 1960s East Coast Surfboard from a longtime Carolina Beach resident. And there’s a 1970s board by Dale Velzy, one of the original longboard shapers in California. With a staff full of surfers, it’s hard to resist making use of that decor. About the Velzy board, Ewan admits: “When Craig wasn’t looking, I’ve taken that one out.”