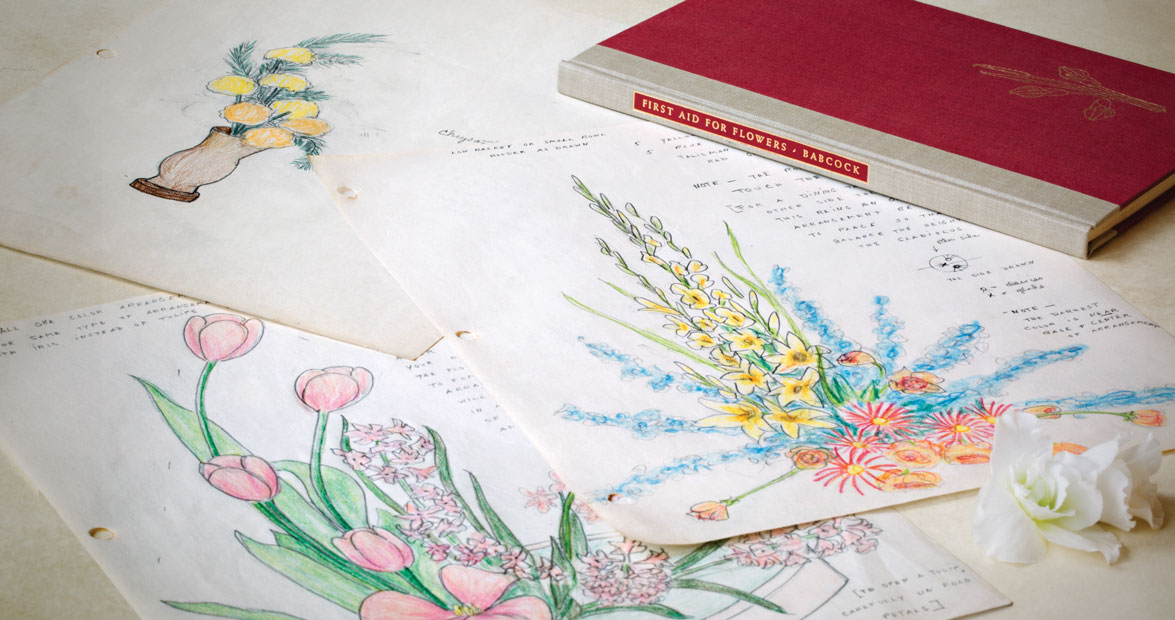 Katharine and R.J. Reynolds weren’t looking for much in a new home. A little country house on a bit of land away from the hustle and bustle, cramp and chaos, of downtown Winston-Salem — 1,067 acres should do it. And everyone knows it takes a village to raise a family, so include a school and a church and stables. A model working farm. A greenhouse and formal gardens. The house itself will need a famous architect, naturally. Bring in Charles Barton Keen, known for designing homes in Pennsylvania and New York. Finally, after five years in the making, the Reynoldses’ dream home was complete in 1917. But it still needed a name, something modest yet enduring: Reynolda House. 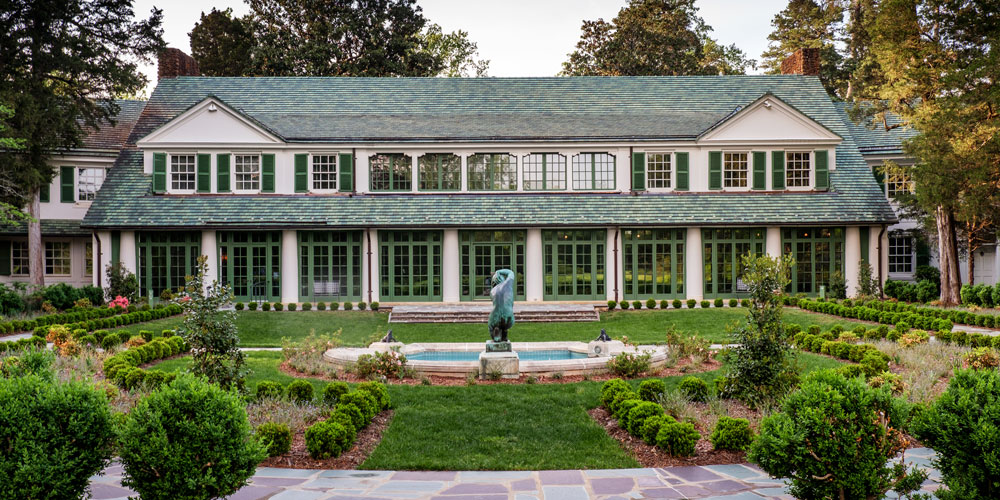 The Reynolda House Museum of American Art’s gardens are breathtaking to this day. photograph by Jay Sinclair

Like many family stories, this domestic bliss was counterbalanced by sadness: R.J. died of cancer in July of 1918, six months after the family moved in. Katharine herself, so intent and determined with her self-sustaining farm and formal gardens, died almost six years later, in 1924.

But their eldest daughter, Mary, got more time with the house. She married financier Charles “Charlie” Babcock in the grand hall just after the stock market crash of 1929, and by 1935, she’d acquired the estate from her siblings, Nancy and Dick. Farms are fine, and who doesn’t appreciate an estate filled with teahouses and pergolas? Mary Reynolds Babcock, that’s who. Hemlines had risen and fallen again, and, the Great Depression notwithstanding, people were smoking up a storm. And Mary, vacationing at Reynolda from Greenwich, Connecticut, where her family lived for most of the year, was ready to play. 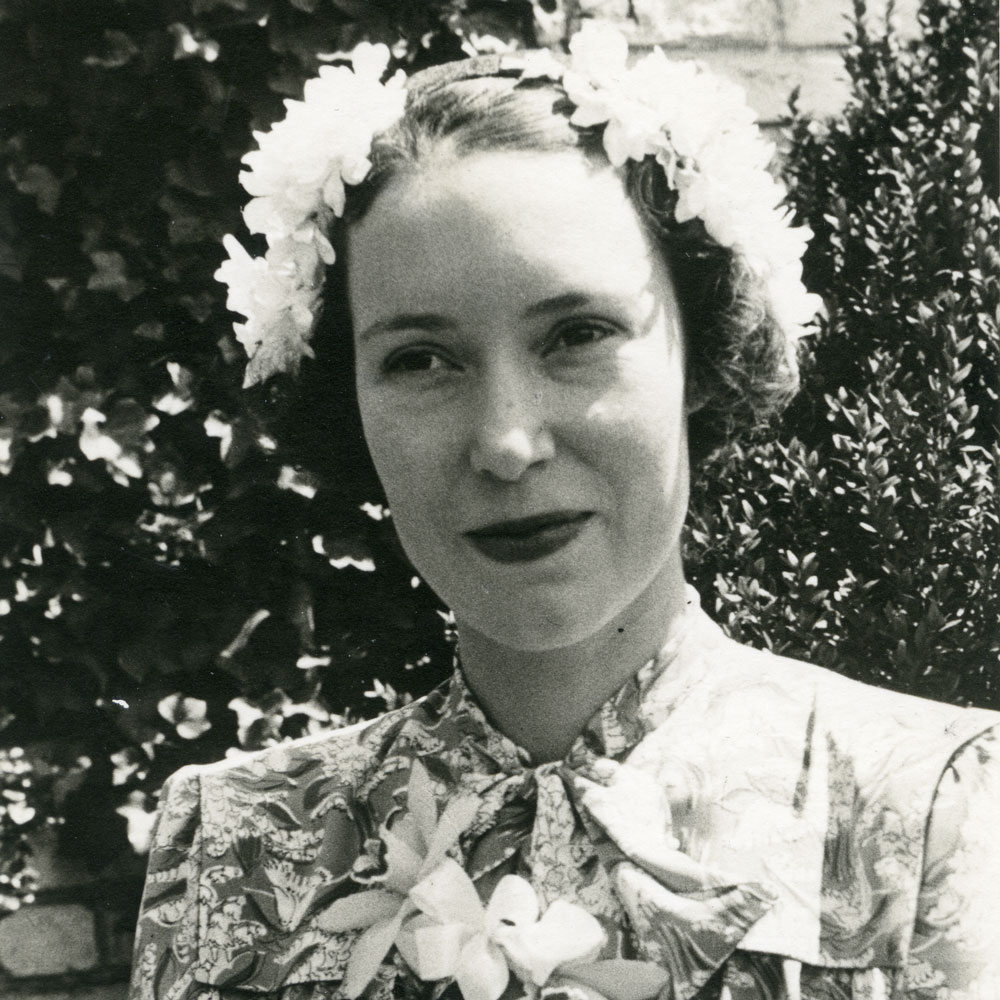 Mary Reynolds Babcock, sporting a flower tiara for Easter 1942, spent untold hours among the plants in the formal gardens of what is now the Reynolda House Museum of American Art.

A letter Mary wrote to Reynolda’s housekeeper noted that she’d be arriving by train and intended to have a party for her sister and a friend, and they would “need a pin boy for bowling — maid at door — man in bar.” She also requested that water be put in the pool, and, since it was just girls, she wanted a man to sleep at the house that night. “Someone from the farm will be fine — not the minister,” she wrote. That last bit is underlined. A Girls’ Night indeed.

And yet, this party person and entertainer extraordinaire is remembered as essentially shy, a scholar and reader who loved art. Perhaps losing both parents while still so young contributed to her somewhat reticent nature, suggests Phil Archer, Reynolda’s Betsy Main Babcock Director of Program and Interpretation. “But once you got to know her, she was really fun,” he says. One year’s Christmas card features a drawing of Mary stretched in a chair, kicking up her high-heeled shoes, holding a cigarette while a highball glass lies on the floor with the ice cubes tumbling out.

Mary’s photo album reflects her blithe spirit: Pictures show Mary and friends sunbathing and riding bicycles past lawn statuary, and Mary lounging in a silk dressing gown, Katharine Hepburn style. Pasted to one album page is a telegram to Mary and Charlie that reads, Sorry I had to be such a fool last night — signed, “the lone night-rider.”

A window on another era, the album is part of Reynolda’s archives. And there, in the photos of Mary and the splendid grounds of Reynolda House, is touching evidence of her true passion: flowers.

We might have guessed that Mary had a love of flowers from the photographs of her crouching in a tulip bed, and of her wearing a tiara of blossoms. We might have guessed, as well, from anecdotes still told of Mary and her beloved gardens: Like the groundskeeper who, day after day, raked the granite dust of the garden walkways and, day after day, discovered footprints left by Mary, who’d walked the paths barefoot, privately studying the blooms long before his arrival each morning. Then there’s the story of the visitor who reprimanded a woman for picking flowers, never realizing that the individual he’d chastised was Mary herself. Carefully maintained in Reynolda’s archives, newspaper clippings announce awards given to Mary for “Best Mantel Arrangement,” and pamphlets attest to the many garden clubs she belonged to, each item speaking to her devotion to flowers and foliage.

But it’s the index cards, the slips of paper, the loose sheets, and the thick, deckle-edged paper with watercolor illustrations and notations and reminders and lists that confirm Mary’s passion for cultivation and preservation and arranging. Nearly all in pencil, the neat, tiny, feminine handwriting is faded with age, but the instructions are definite, and amazingly wide-ranging for someone who, if she so chose, never needed to snip a single stem. 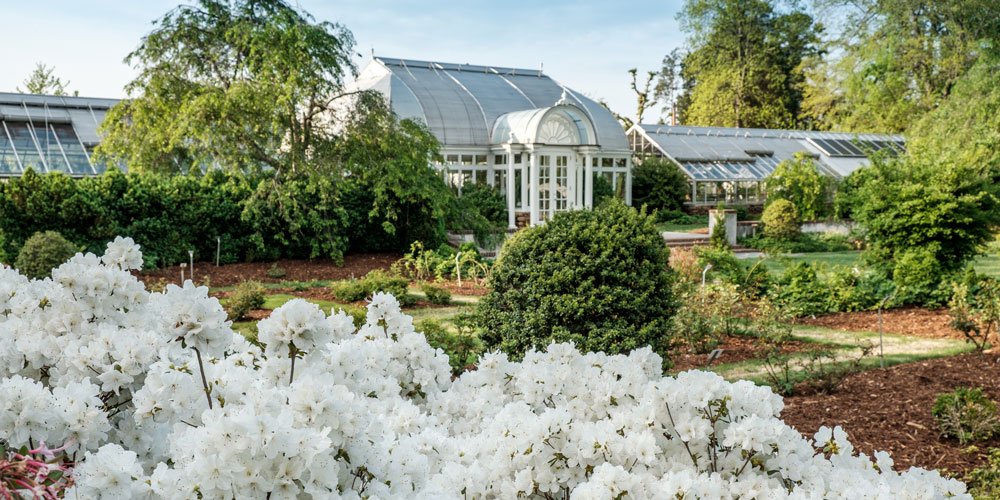 Azaleas, like these outside The Palm House Conservatory and Greenhouses, have been a landscape feature of the estate since it was built. photograph by Jay Sinclair

Some notes are to Mr. Disher, the greenhouse manager and florist, about changes to the gardens. While many Southern gardens are based on azaleas, Mary had Disher bring in elephant ears and calla lilies, plus shrubs and trees like quince and redbud that could be forced to bloom indoors before spring’s arrival. She featured these dramatic yet minimal plants in her ikebana-ish arrangements. A fan of Frank Lloyd Wright’s sleek architecture, Mary understood that his modern designs weren’t right for Reynolda, but she translated similar aesthetics to her arrangements. Thomas Sears, Reynolda’s landscaper, returned in the ’30s and made suggestions for simplifying the gardens, thus reducing maintenance on the grounds. If her mother wanted a farm that fed the village, Mary wanted Reynolda to be self-sufficient, and allowed commercial concerns to operate out of the estate, such as a florist and horticulturist for hire.

For enthusiastic but amateur arrangers, Mary’s notes on flower arranging are remarkable. She sketched pictures of various flower-filled vases and baskets on the grand piano or dining room table labeled “right proportioned” and “wrong proportioned” and “better proportioned.” Always have a leaf or flower break the line of the vase. In a glass vase, always keep the stems together. … Don’t (underlined four times) cross stems, stairstep, or have two stems same height. On peonies: Cut when petals just begin to open. Place in water and cut the stems under water and cut only under water thereafter. Do not put peonies in a metal container. Metal affects them. On coffee tables: Leave space to serve coffee. Keep arrangements small. 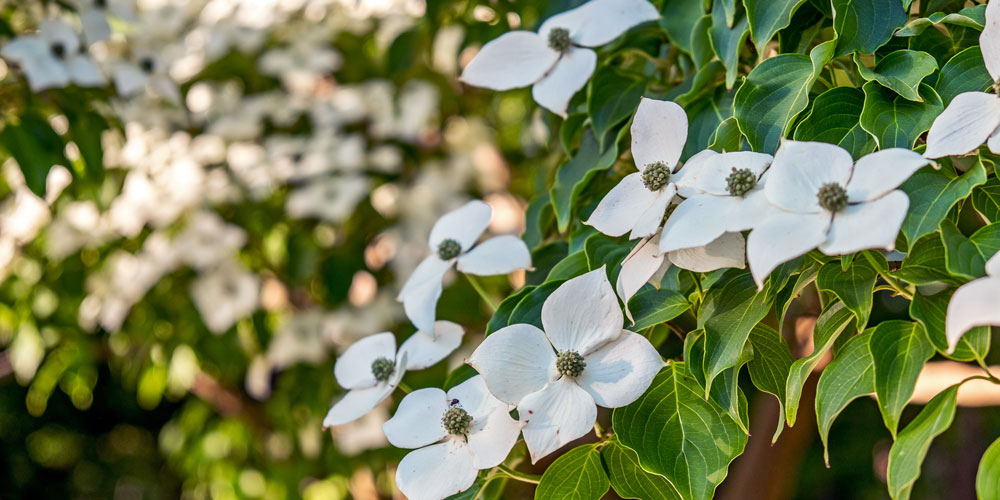 No Southern garden is complete without dogwoods blooming in spring — including in the 129-acre Reynolda Gardens at Wake Forest University. photograph by Jay Sinclair

In what had been the family’s private kitchen, Mary created a flower room, with deep sinks and extended counters. One wall is covered in shelves for her collection of cut-crystal flower containers. Ask yourself: Have the right containers been used? she writes — a speech to a garden club or a class, perhaps? I’d want off-white or brown or celadon or dark evergreens or gray for the upright vases.

Some lists are devoted entirely, meticulously, to the equipment necessary for arranging, in order of importance. Cane sugar, grain alcohol, and boric acid are all “Must Haves”; powdered alum, charcoal, and raw white of egg are included in the “Nice to Have” category, with a warning to “handle carefully” hydrochloric acid. Here was a woman so intent on perfection that she kept a sable paintbrush to dust off pollen, and “Crisco or other grease” to shine foliage. 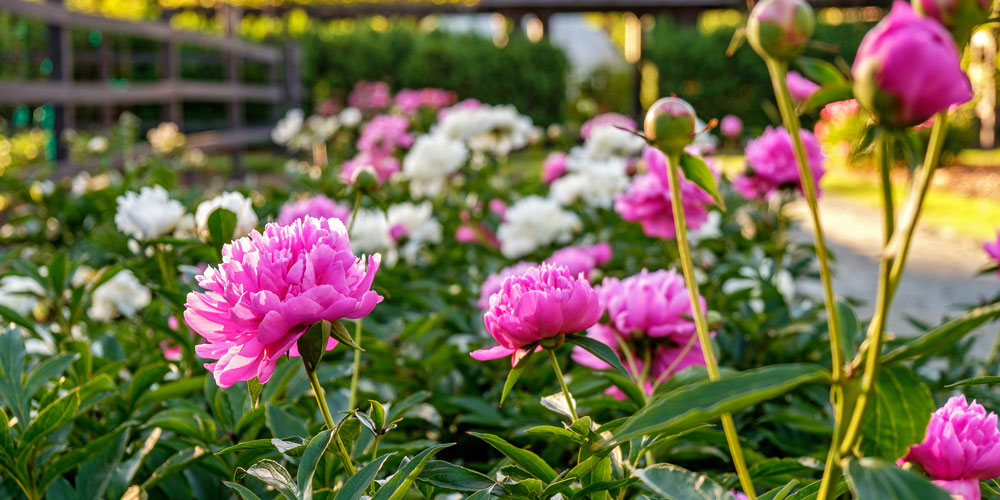 In the 1920s, peonies were a fixture in many types of gardens. In beds by The Playhouse, the showy blooms command attention in early May before the garden’s roses take the spotlight. photograph by Jay Sinclair

As with many handwritten memorabilia, the author seems to return throughout the documents: avid, interested, invested. “To prolong the life of flowers, understand them,” Mary writes. And she is here, carefully counting out eight drops of peppermint oil in a gallon of water to preserve daisies. One wonders at her trial and error in discovering that, for dogwood: If the flowers are beginning to wilt, dip the stem in a 10 percent solution of hydrochloric acid or dip them in a tincture of mustard and alcohol, then soak in deep water.

Bari Helms, Director of Archives and Library at Reynolda, speculates that Mary was putting together a book of tips. As a member of Winston-Salem’s Twin City Garden Club, Mary advocated for the organization’s recognition by the Garden Club of America. Yet among the care advice for alphabetical listings of flowers — cyclamen, sweet peas, even gourds — are casual reminders about her four children, with a scribbled addendum about forget-me-nots.

In 1953, Mary died at 44, nearly the exact age as her mother. Her distraught husband, Charlie, gathered her gardening, preserving, and arranging notes and sketches, and had them privately published the next year for family and friends — giving one to the Twin City Garden Club, as well. The Reynolda archives have only one diminutive hardback copy of First Aid for Flowers.

Blossoms are temporal; the plants they bloom from, thankfully, are not. Mary Reynolds Babcock’s life, too, was relatively brief, but her elegant style and exuberance is preserved at Reynolda. Wander the garden, breathe in the petal-scented air, and you’ll find yourself in the presence of its barefoot mistress, clippers and notebook in hand, detailing advice still pertinent to prolonging the most glorious of spring blossoms.