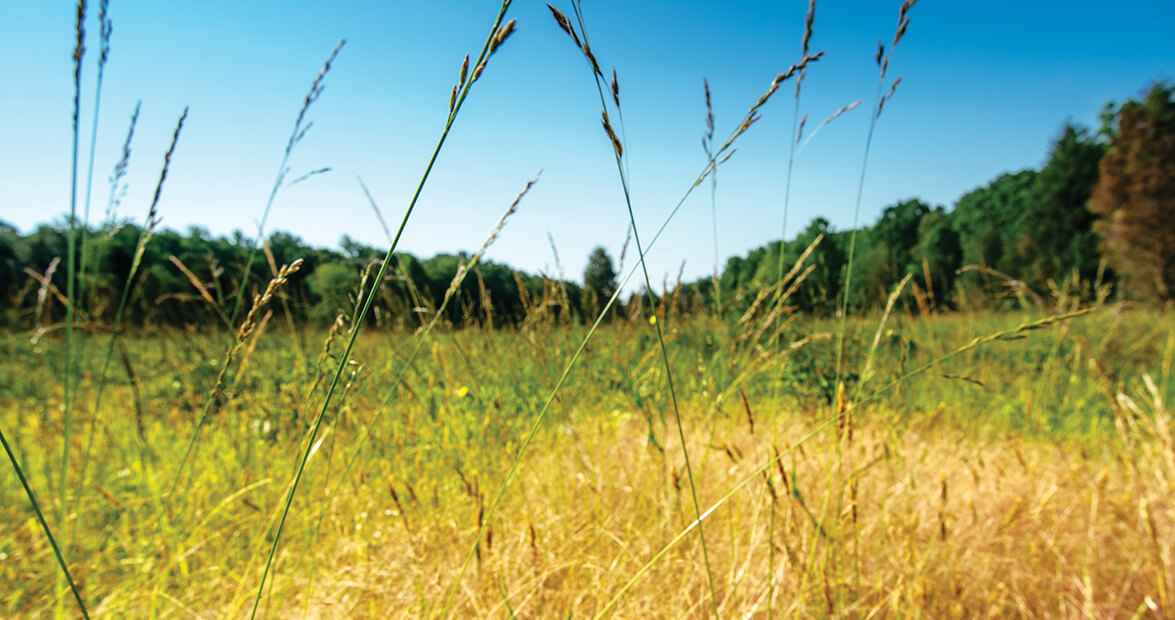 This can’t be right.

It’s a nagging thought, difficult to push from your mind when you first walk througha native Piedmont prairie. Tall grasses grow shoulder high. There’s not a tree within a hundred yards.

But there was. And more than you might imagine.

For hundreds of years — indeed, until the past couple hundred years — open, sun-drenched grasslands pocked the interior of the North Carolina Piedmont. These so-called “Piedmont prairies” did indeed evoke the rolling prairies of the Midwest. They grew lush with little bluestem, Indian grass, prairie anemone, and tall larkspur. Early descriptions of these Carolina grasslands read like travelogues through the Serengeti. Dr. Jethro Rumple, who came to pastor a Salisbury church in 1860, wrote that a “venerable citizen” of the area could remember when “his father told him that, when he settled there, about 1750, he had to haul the logs for his house more than a mile.”

William Bartram, the peregrinating flower-hunter of the 18th century, wrote of North Carolina’s “vast flat grassy savanna and Cane meadows, intersected or variously scrolled over with narrow forests and groves.” John Lederer’s 17th-century map showed a grassland astride the foot of the mountains. A 1718 map by the Frenchman Guillaume Delisle showed a “Grande Savane” marked west of the Neuse River.

Happily, these native grasslands haven’t been entirely forgotten. A growing interest in restoring North Carolina grasslands has taken root across the Piedmont. Today, prairie fragments and carefully restored prairie meadows are being tended across the state. The Mecklenburg County Park and Recreation Department manages nearly a dozen prairie preserves around Charlotte. There’s a 20-acre grassland at the 708-acre Horton Grove Nature Preserve, in northern Durham County. Just outside the Raleigh Beltline, the N.C. Museum of Natural Sciences manages the rolling Prairie Ridge Ecostation, where native grasses cloak a broad slope hemmed in by bottomland forests.

And it’s not just public parks and preserves singing the Piedmont prairie song. Power companies have identified remnant prairies in their oldest powerline cuts. Private landowners are pitching in, too, some in a big way. At George Hi Plantation, a quail-hunting preserve near Clinton, nearly 1,000 acres of native big bluestem and Indian grass now carpet old cattle pastures and cornfields. Each sunny glade is a tiny pocket of what once was, and the seed of what might yet be.

You can once again wade through a Piedmont prairie, part the grass with your shoulders, and perhaps hear a meadowlark. Or spot a loggerhead shrike, a rare, tiny hunter of insects and mice. That old Rowan County pastor, Dr. Rumple, might have lamented that these grasslands were “destitute of forests.” But today they are arks of a lost North Carolina, painstakingly nurtured by modern stewards. Over the eons, it took mastodons, giant Pleistocene ground sloths, centuries of fires, and Native Americans, elk, and bison to create and maintain a Piedmont prairie. Now it takes a special kind of vision: the kind that sees the past growing tall in the future.