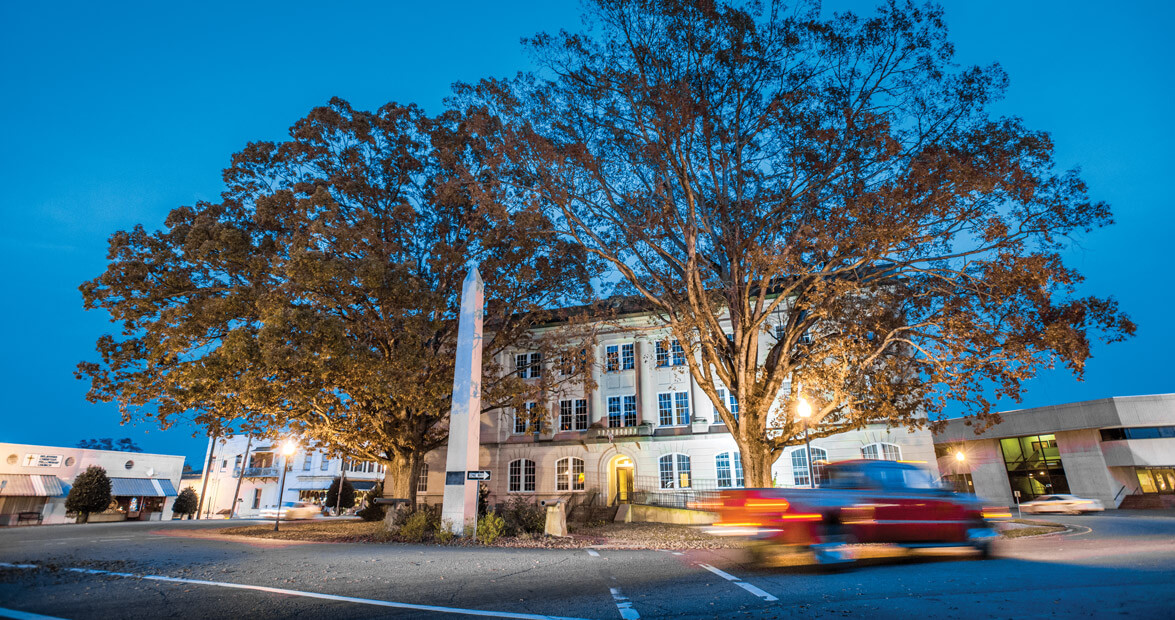 Years ago, the Tyson & Jones Buggy Factory put Carthage on the map as the buggy-manufacturing capital. In its pinnacle year, 1890, the factory cranked out as many as 3,000 luxury buggies from its production line, which was quite a feat in the postwar South. That success and innovation with line production reportedly attracted Henry Ford to town in the early 1900s. Legend has it, he wanted to convert the factory line to produce his Model T. The factory owners rebuffed him, writing off the automobile as a passing fancy.

Reticence to relinquish the familiar had taken hold in this Piedmont town, and Ford went on to settle in Detroit. Standing as a reminder of both a lack of vision for what could have been and a stubborn faithfulness to the tried and true, the water tower captures the lasting lesson learned. A buggy on its own won’t go very far.

All roads lead to Carthage, eventually. It’s an adage the town of 2,200 believes wholeheartedly, perhaps more than a place its size should. To some extent, the saying is spot on. Carthage is the county seat of the southern Piedmont’s Moore County. People come here to take care of important matters.

The main state artery N.C. Highway 24/27, which connects Charlotte with the coast, circles around the historic courthouse in the center of town. The highway is often frenetic with local and through traffic, which usually includes military convoys from area bases. Truck traffic rattled the windows in the old courthouse so much that the town had to replace them all, says long-time Town Manager Carol Sparks.

In order to get to the heart of town, though, you must travel past acres of neat fencing boxing in lush horse farms, homesteads barricaded by old yard dogs sunning themselves in the drive, fields ringed with weathered bales of hay, and plots with white clapboard churches surrounded by moats of copper-colored pine straw. The journey to get here is part of the town’s charm.

Its rural surroundings, however, mean many things require a drive. Raleigh, Durham, Greensboro, Charlotte, and Fayetteville create a cartographical doughnut of sprawl and development around Carthage. And the town sits in the gap.

Just a scant 15 miles to the south is Southern Pines, with its first-run movies, restored train station, boutiques, and restaurants with glittering, gold signage and a clientele to back it all up. The exclusive golfing Mecca of Pinehurst, the next town over, is the definition of posh, with manicured lawns and planned neighborhoods. They are in the same county as Carthage, but different worlds entirely. Carthage is more casual, quiet, a little old-fashioned. 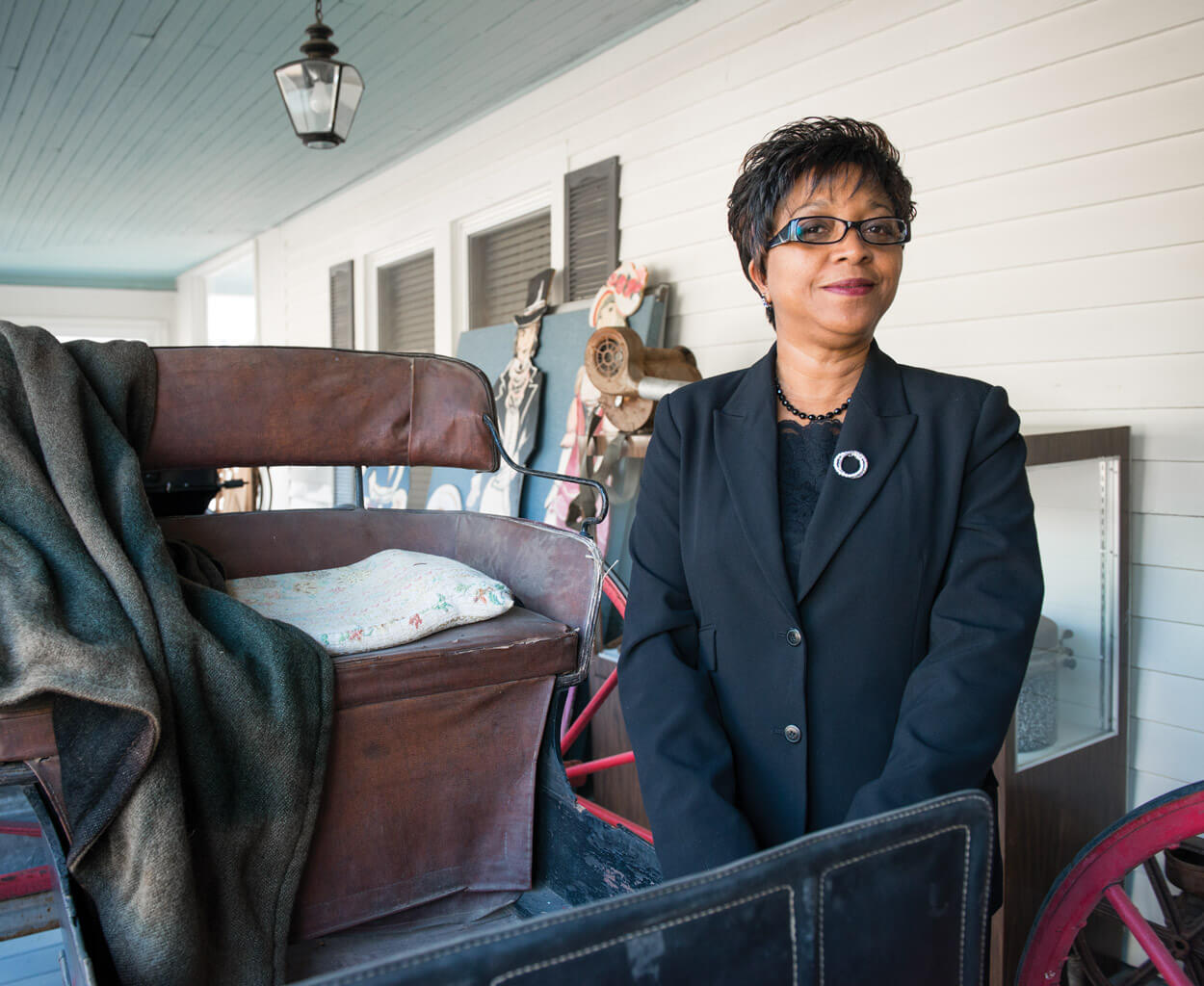 One of their own

Each year, the annual Buggy Festival held on Mother’s Day weekend draws more than 20,000 people to town. The best venue for gaining an understanding of the buggy factory’s past and its influence on this place is The Old Buggy Inn on McReynolds Street. It’s the pink, wedding cake of a house just west of the traffic circle, and it’s the only hotel in town.

In 2005, Pat Motz-Frazier retired to Carthage from California. She opened this bed-and-breakfast in the house built by William T. Jones, once president of the buggy factory.

“When I first saw the house, I felt like I was home,” Motz-Frazier says. She tries to pass on that welcome feeling to her guests. Almost a decade since she opened the inn, Motz-Frazier’s warmth as an innkeeper is well known throughout the area.

“I feel like I’ve made a place for myself,” she says. “I have a sense of purpose here.” She knows her neighbors. She has a seat on the town council, is on the board for the literacy council, and helps organize festivals. She is rooted.

Motz-Frazier’s kinship with this house sparked an unexpected reconciliation of history for the town and one of its most elite residents. It started when she went looking for information about William T. Jones, the man who built her house. But there wasn’t anything about him in the local archives. That omission perplexed her. He served as a first lieutenant in the town’s unit in the Civil War. When he died, he was among the wealthiest men in town and lived in one of the largest houses around. Motz-Frazier found dozens of photos of Jones’s contemporaries, but not one of him. The more she searched, the more she suspected it was all by design. His image had been hidden on purpose.

An unearthed newspaper article listing Jones as “a mulatto gentleman” confirmed her suspicions. Jones was born a slave on a plantation along the coast and was freed by his white father when he was a boy. He learned a trade as a carriage painter, and his expertise in waterproofing made him a valued factory worker in Carthage. He worked here in the years leading up to the Civil War before volunteering as an officer in the town’s integrated unit in the Confederate Army. His entire company was captured by Union soldiers, and Jones was detained in a Union prison at Fort Delaware.

Inmates were encouraged to practice the trades they knew, and Jones began to make moonshine from bread scraps and potato peelings. He sold his liquor to prison guards and townspeople. Once the war ended, he chose to make the arduous journey back to the place he considered home with an estimated $3,000 in Union currency in his pocket. He invested the money in the factory, creating jobs and intense loyalty.

“The men in town were able to collect salaries, which they could use to buy seeds and plant new crops after everything had been devastated,” Motz-Frazier says. “The people of Carthage survived after the Civil War and didn’t starve like in so many other Southern towns. In his lifetime, he had two white wives in a time when it was illegal for blacks and whites to marry, when blacks were persecuted and when whites who supported blacks were persecuted.”

The people of Carthage, however, looked the other way, Motz-Frazier says, protecting not only Jones, but also themselves. And with each passing generation, that secret was buried a bit deeper.

Mayor Lee McGraw often stops by Motz-Frazier’s for a visit, easing into a parlor chair and joining whatever conversation may be happening. Like many others in town, he is pleased by the Jones revelation and the open-minded tolerance it suggests of past residents. In the last couple of years, the Carthage Historical Museum has incorporated the newly discovered facts into the town’s collective-memory script.

McGraw wears a white, monogrammed sweater-vest that suggests he is no stranger to a golf course. In this part of the world, that attire is pretty common. McGraw grew up in Carthage and remembers when downtown was booming with drugstores, dime stores, and a shoe store. He remembers farmers coming to town to sell their tobacco and spend their profits.

“Every storefront was filled,” he says. After college, he launched a sales career in Raleigh and Wilmington. But he circled back to town when an old house in need of repair showed up on the auction block. The potential of the place lured him home.

Filling up storefronts again was part of McGraw’s campaign platform. He envisions the county building an indoor swimming pool as an amenity for the town.

“Right now, we do not have enough,” he says. “You have to go to Aberdeen or Sanford. Carthage is not just a place to pay taxes and go to court.”

The mayor is right. While people have little escape from paying their taxes or keeping dates with the judge, they are now coming to Carthage for something more enjoyable — the barbecue. Just 250 feet off the 2,538-foot, paved runway at the Gilliam-McConnell airfield sits the Pik-N-Pig restaurant.

The Pik-N-Pig, with its wood- and charcoal-cooked pork, is a culinary destination. When the restaurant opened several years ago, the landing strip next door saw about one plane come in a week. Now, it averages about 100. While the airfield has a maintenance facility and will start construction on an air museum later this year, airfield owner Roland Gilliam attributes much of the traffic increase to the smoked pork waiting at the end of the runway. The restaurant’s website lists the airfield coordinates along with the street address. 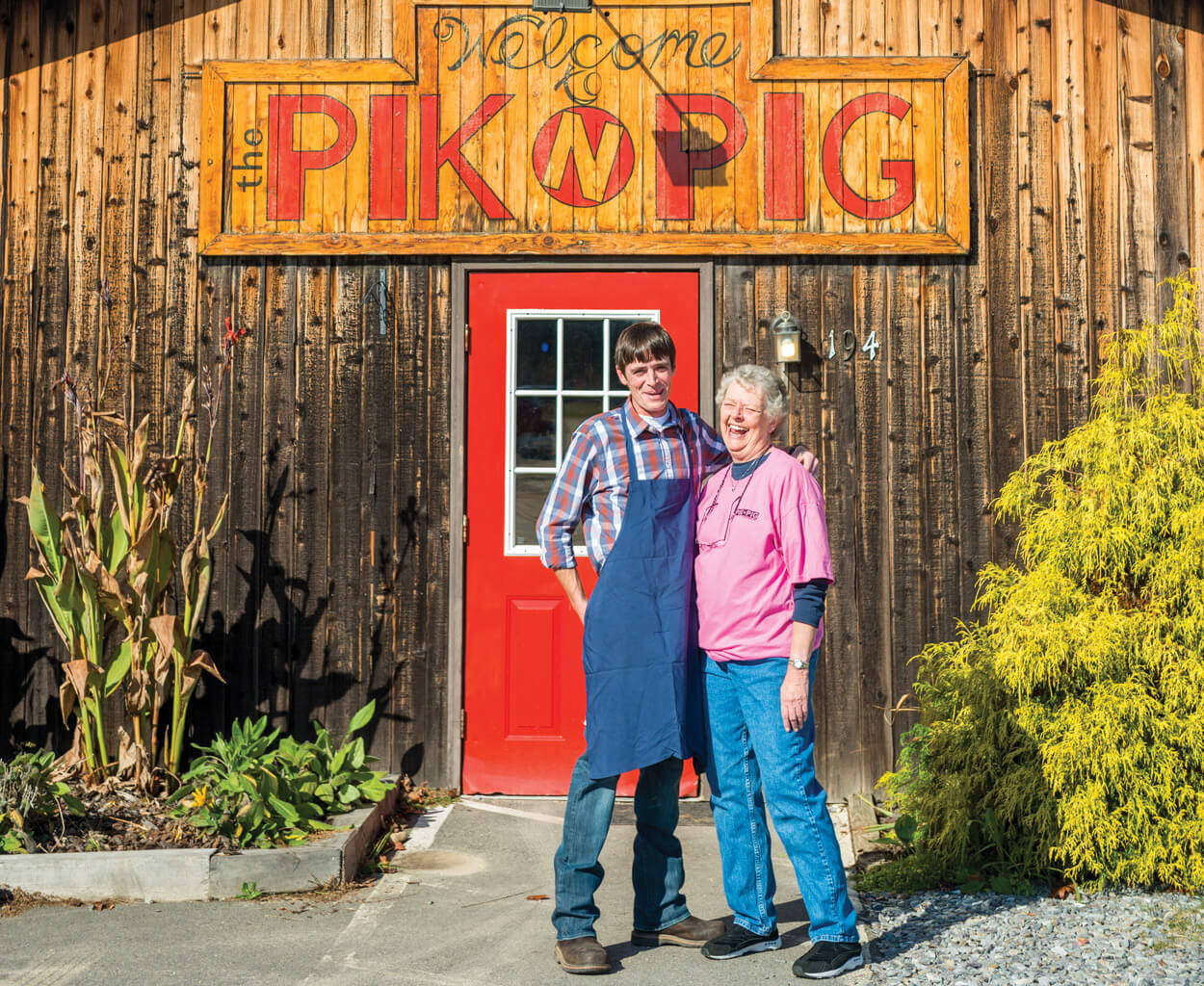 The Pik-N-Pig, run by Ashley Sheppard (on left) and his mother, Janie, is only 250 feet from the runway. photograph by Emily Chaplin

Whether traveling by plane or car, about 500 diners file through the restaurant on any given Saturday. Reservations are encouraged, but not for the tables. If you don’t call ahead to reserve a rack, the ribs often sell out. For Ashley Sheppard, who owns the restaurant with his mother, Janie, the crowds are a testament to what seems an infinite store of patience and determination. He smokes about 1,000 pounds of pork a week, tending to it most waking hours in the screened-in smoke room behind the kitchen. He also prepares brisket and barbecued chicken.

“You’ve got to be with it all the time,” Sheppard says, graciously taking a seat during a crowded weekend night to talk pork. Around him, families pack into tables, and people stand patiently, waiting for their turn to sit. Sheppard studied at Johnson & Wales University in Charleston, South Carolina, but his passion for cooking barbecue started much earlier and closer to home. Sheppard learned by watching his grandfather in his restaurant. Now, Sheppard has his own.

His words are momentarily overpowered by the noise of conversation all around him. It’s the sound of his success. Outside, a plane roars down the tarmac. It then lifts gracefully above the trees and into the sky above Carthage.

4 Things not to Miss in Carthage

Carthage was home to one of the largest buggy manufacturers in the nation from the mid-1800s to the early 1900s. Each year, the town celebrates that history with a festival that draws about 20,000 people. The festival takes place this year on Saturday, May 11, beginning at 9 a.m. at the courthouse square in downtown.

Purportedly one of the largest privately owned tractor and steam-engine collections in the country, Ederville is a sight to behold. The best time to explore is in November, though, when owners Ken and Patti Eder open their sprawling complex to the public during a three-day train and tractor festival.

For more than 200 years, the Blue family has operated Highlanders Farm, where they grow a little bit of everything, from strawberries and tomatoes to bok choy and sprite melons. The farm opens its stand in mid-April. If you make a visit, you can pick your own strawberries and eat some homemade ice cream.

Sepia linens, photos, and local memories abound. See what all the fuss is about by investigating an original, restored Jones buggy up close. The museum is only open Sundays from 2 p.m. to 5 p.m. and by appointment. Free admission, but donations are always welcome.