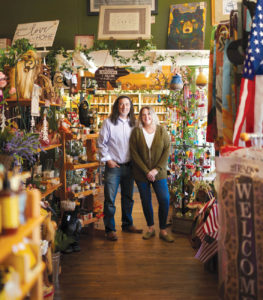 As co-owner with his wife, Tina — and an unofficial tourism representative — Dennis offered them suggestions for things to see and do in Burnsville. Among his favorites: hiking at Mount Mitchell, the Toe River Arts gallery, and the Yancey Theatre, a 1939 single-screen movie house downtown that still shows first-run films. His passion for Burnsville was so contagious that the Vermont couple “fell in love with Main Street and Burnsville and ended up moving here,” Dennis says. “They still come into the store every time they come downtown, and they bring their visitors here, too.”

Something Special Gift Shop. A Main Street staple for 35 years, the Matelskis’ shop stocks items ranging from local pottery, candles, and wind chimes to apparel. The Matelskis also own the adjacent Monkey Business Toy Shop, where families can find art and science kits alongside traditional toys like Slinkys and Etch A Sketches. “We’ve had at least three generations of customers shopping with us,” Dennis says. 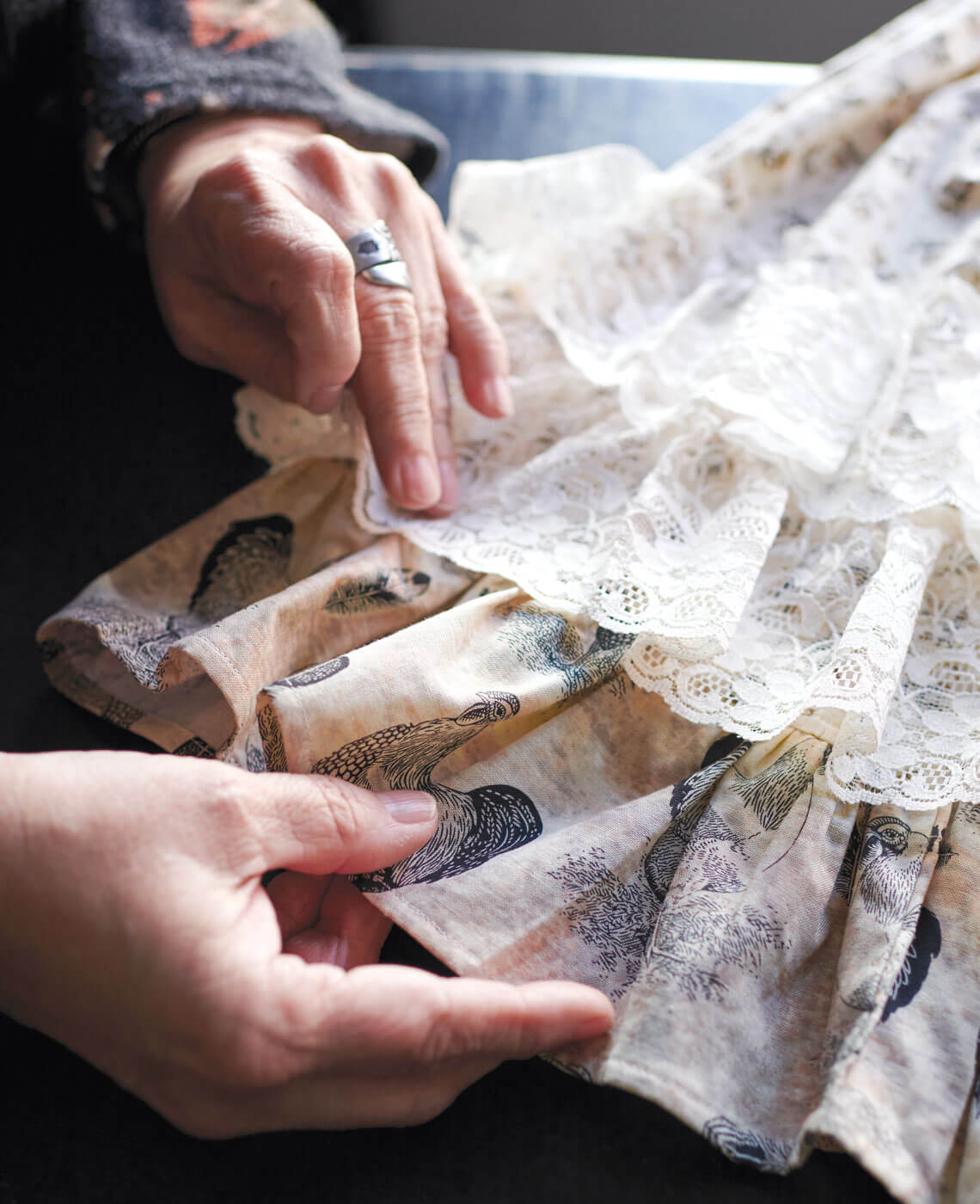 Hammond Antiques. “It’s filled to the rafters with great vintage, hard-to-find items,” Dennis says. Proprietor Ralph Hammond can tell the stories behind all of the pieces he stocks. 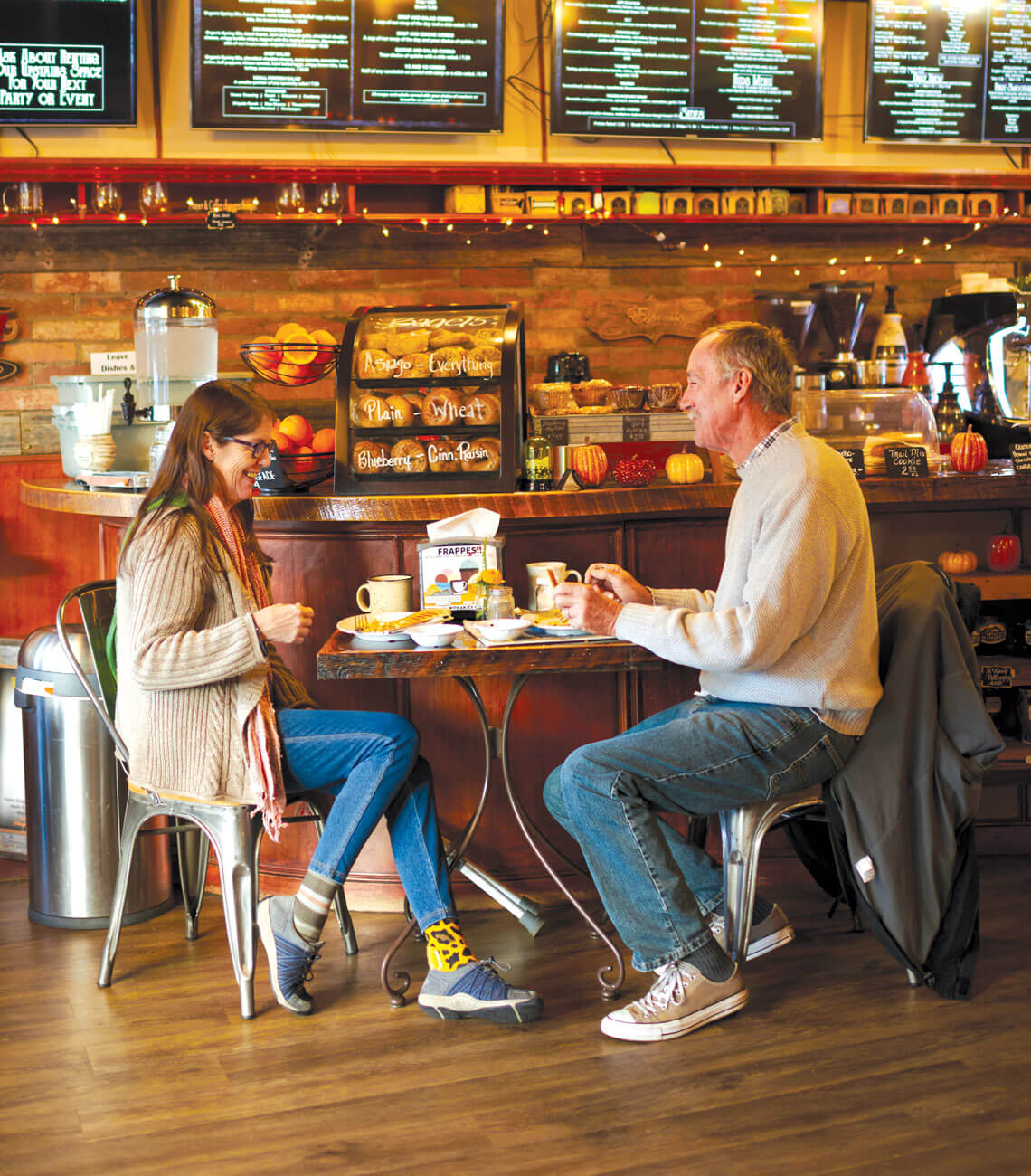 Appalachian Java. Dennis is a regular at this coffee shop, ordering a cup of joe or lunch and catching up with his downtown neighbors. “It’s as much a community center as a coffee shop,” he says. The café serves breakfast, lunch, and dinner alongside fresh-baked sweet treats.

Pig & Grits. “[Chef] Leigh Howell knows his stuff when it comes to Southern comfort food,” Dennis says. Hearty breakfasts like the Eggs Benedict Americana and the buttermilk chicken and waffles are as popular here as Southern fried catfish, molten mac and cheese, and other savory suppers. 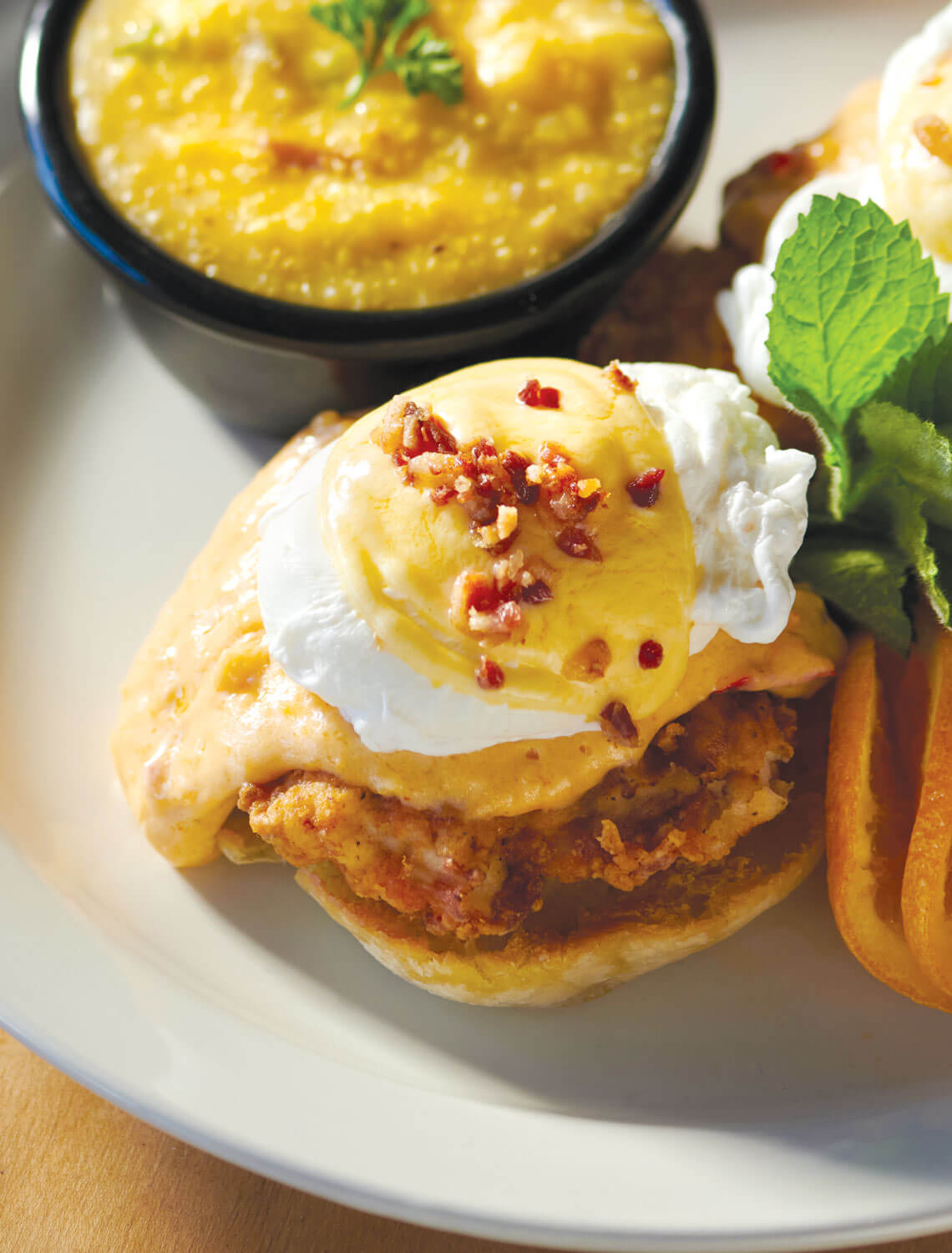 Garden Deli and Snap Dragon. The tuna melt, BLT, and chicken salad sandwiches attract big crowds at Garden Deli. Plus, “It has a wonderful patio for outdoor dining,” Dennis says. Next door, Snap Dragon, owned by the same family, is a kitchen and bar with a nautical theme. Hurricane cocktails, ranked from Category 1 to 5, are the house specialty.

Parkway Playhouse. One of the oldest seasonal theaters in the state, this nonprofit brings big productions to the small stage. “It doesn’t just bring the theater to our community,” Dennis says. “It also provides opportunities for the locals to get onstage.” The season typically runs from May through October.

Toe River Arts. The arts council gallery downtown showcases the works of some of the hundreds of artists in the area. During the semiannual studio tour, visitors can see artists like Kristen Page of Page Pottery at work. 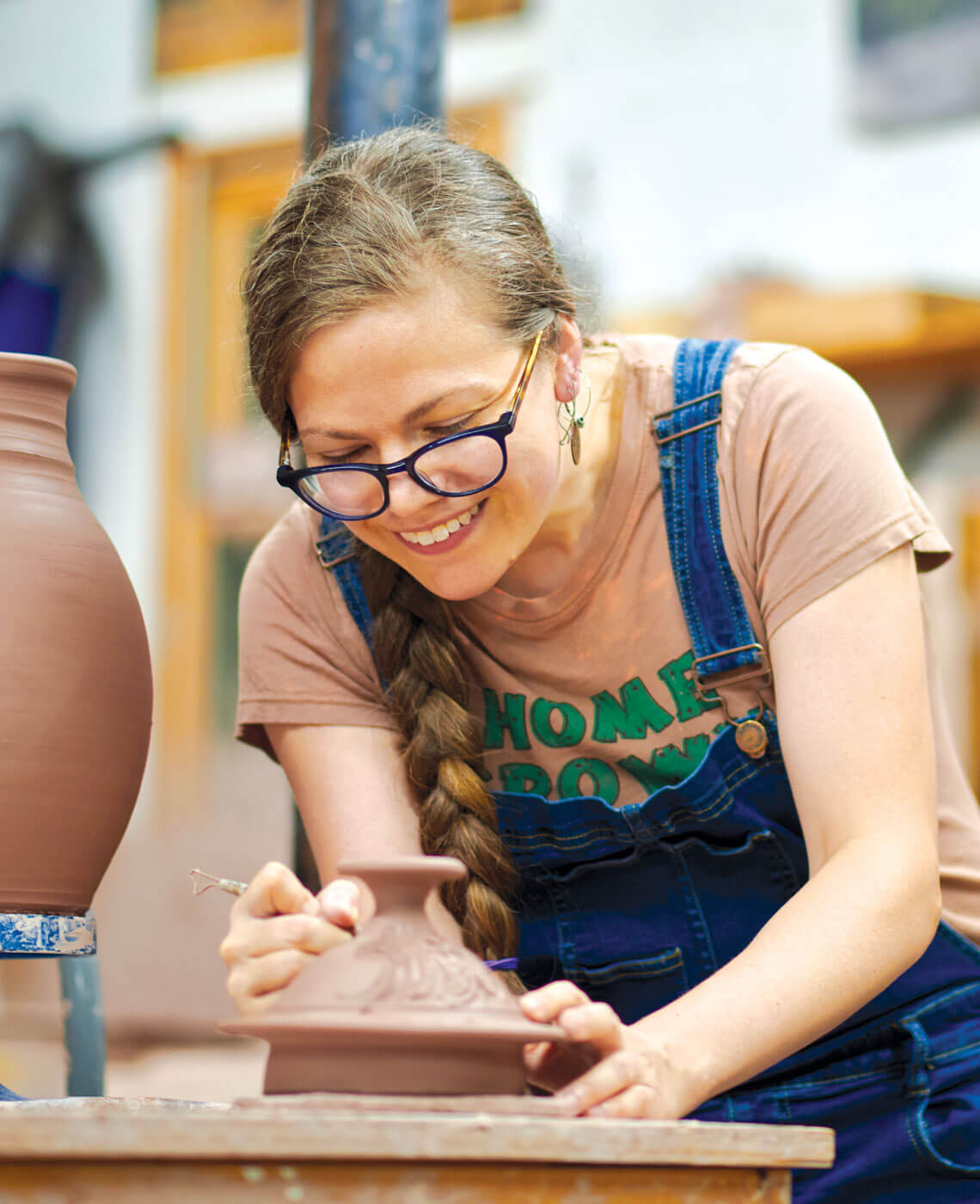 Nu Wray Inn. This 13-room inn has welcomed famous guests including Thomas Wolfe and Elvis. “It adds to the charm and maintains a connection to the history of our town,” Dennis says. Sit on one of the rocking chairs on the wide front porch and look out over the Town Square. 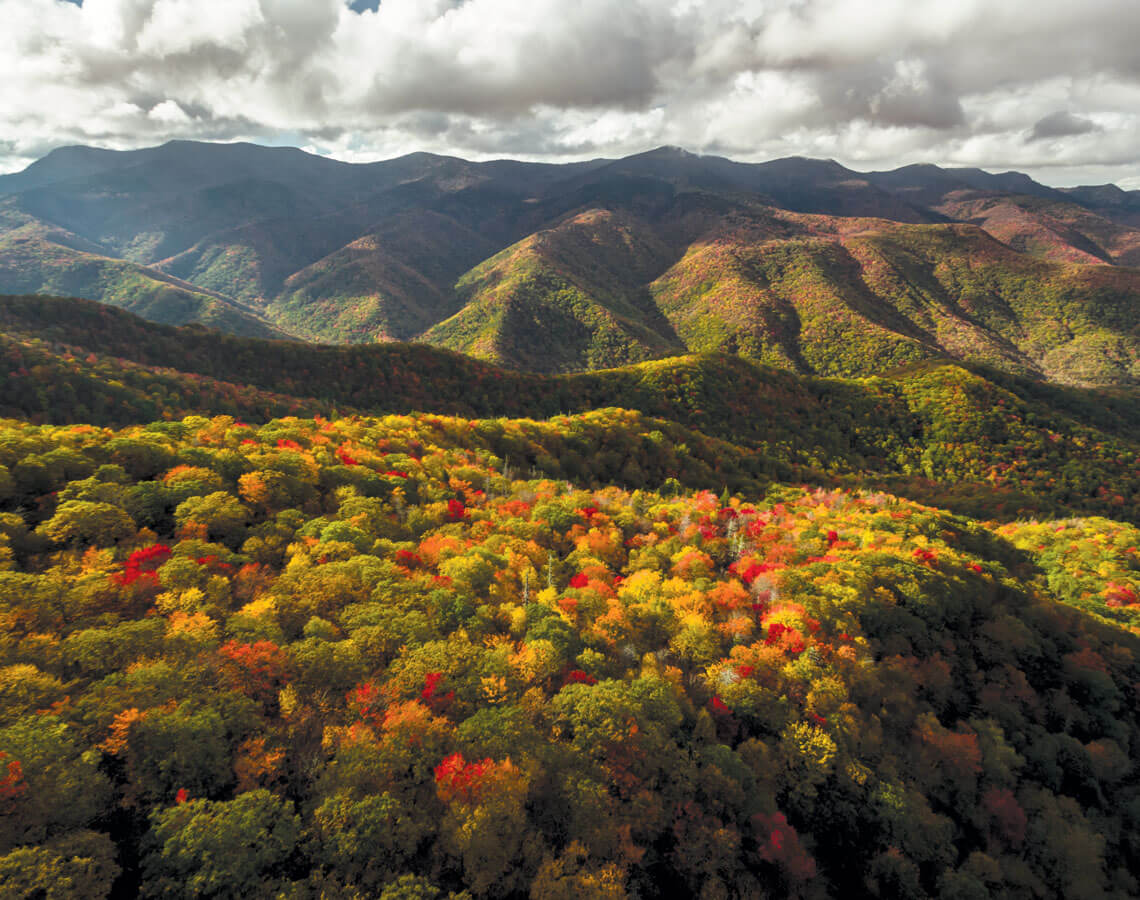 A view of Mt. Mitchell in autumn. photograph by Daniel Weiss

A Peak to Be Proud Of

Rising high above Burnsville is the 6,684-foot-tall Mount Mitchell, the highest peak east of the Mississippi River. In 1915, this mountain became the first state park in North Carolina thanks to community efforts to save the land from logging. Today, an observation deck at the top of Mount Mitchell offers a 360-degree view of the Black Mountains — including six of the 10 highest peaks in the Eastern U.S. — and is surrounded by a spruce-fir forest straight out of a fairy tale. — Katie King