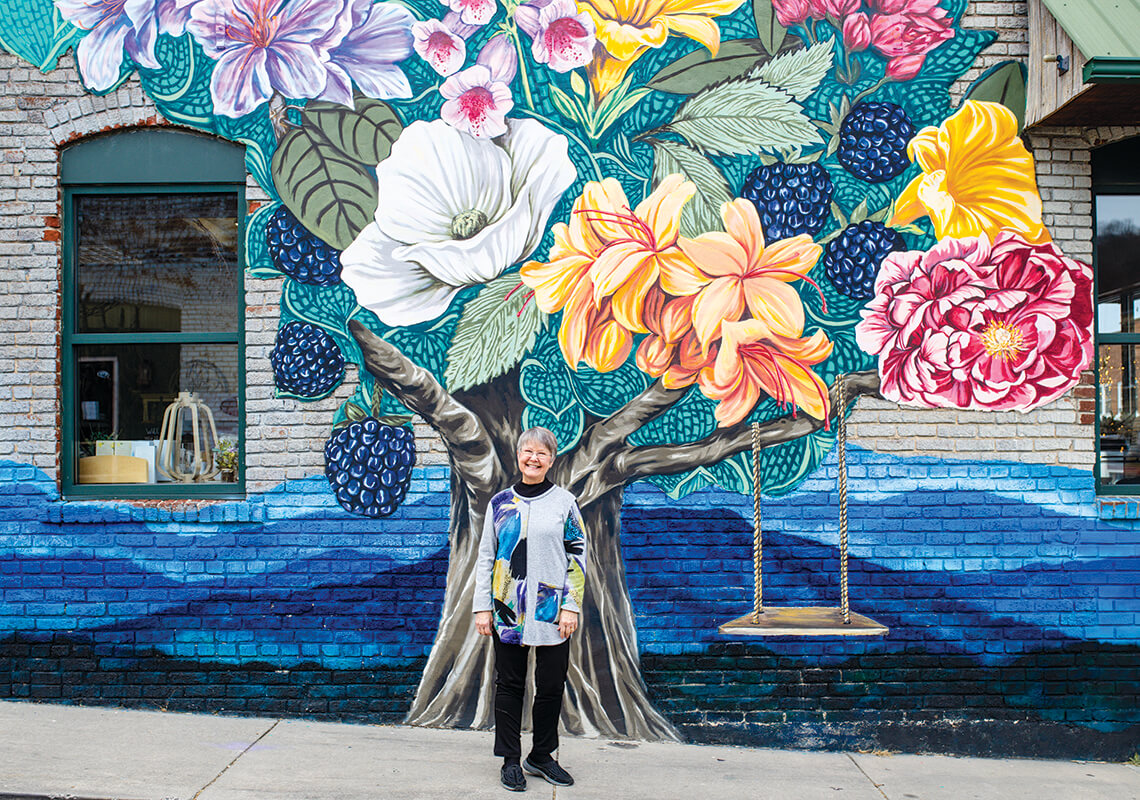 Our tour guide: Jane Lonon in front of the Tree of Appalachia mural. photograph by Revival Creatives

For Jane Lonon, former executive director of the Ashe County Arts Council, the dedication of the Unity in Diversity mural in downtown West Jefferson was an “aha moment.” The mural, a collaboration between the Ashe County Arts Council, local middle schoolers, and the Ashe Latino Center, celebrates the county’s significant Latino population — particularly migrant agricultural workers. A small mariachi band played at the 2006 ceremony, and Latino food was served. “That dedication ceremony was so special,” Lonon says. The experience “really opened up Ashe County to understanding the significance of the diversity that we’ve got here, to celebrating those cultural differences and honoring those traditions.” 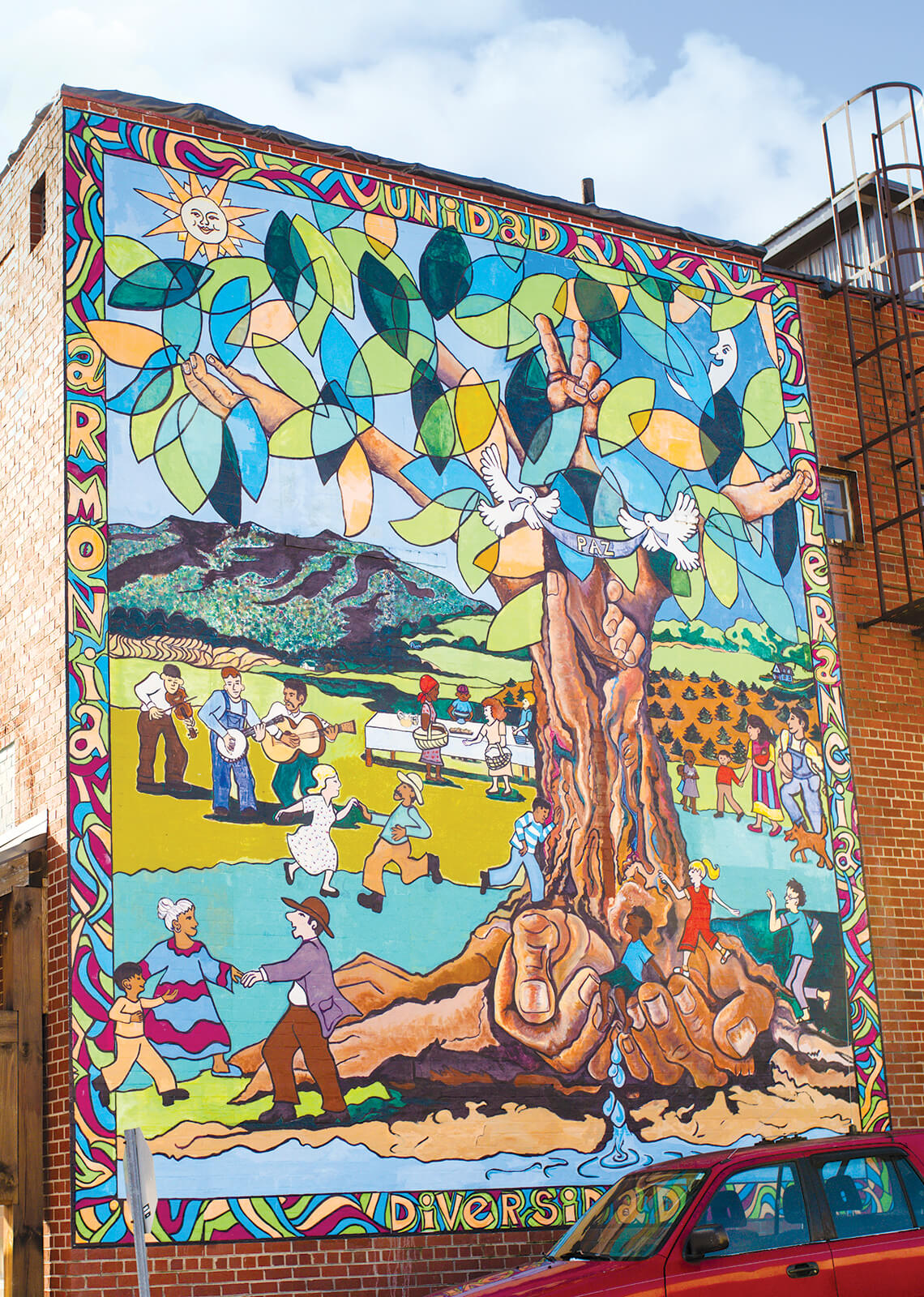 The Unity in Diversity mural. photograph by Revival Creatives

Nineteen murals scattered around downtown represent the area’s wildlife, history, music, and culture, and, as one of West Jefferson’s first revitalization projects, they also symbolize how far the town has come. In the mid-1990s, inspired by the murals popping up and with a new arts center as an anchor, artists and other entrepreneurs began moving to town, renovating old buildings for their studios and restaurants. Today, with its tree-lined sidewalks and art around every corner, West Jefferson has a downtown that locals are proud of. “Those first little baby steps of creating those murals helped [us] visualize what the town might be,” Lonon says. “They’re all different styles, different artists — some local artists, some artists from around the state — but it gave that sense of wonder, awe, beauty, of taking art out of a building, out of a gallery, and putting it where everybody could enjoy it all the time.”

The Honey Hole. With products for beekeepers and other fans of bees and honey, this shop “really takes the art of beekeeping seriously,” Lonon says. “They have an active beehive inside their store, so you can watch them and get educated on how it all works. [The bees] come and go through a little hole in the side of the building.” 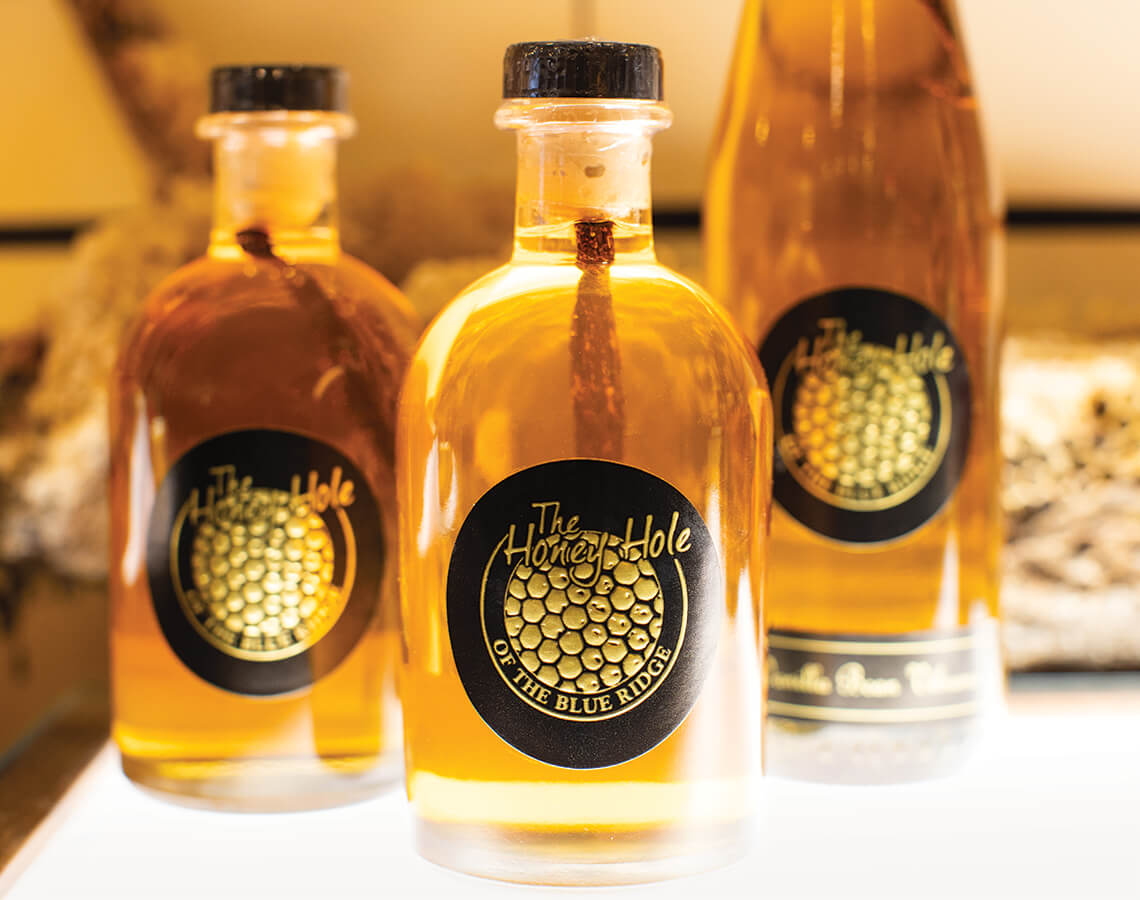 Pick up local honey to take home with you at The Honey Hole. photograph by Revival Creatives

West Jefferson Specialty Foods. Owners Mark Watson and Ed Sheehan moved to West Jefferson from Charlotte and opened their shop in April 2019. They share their love of entertaining by offering gourmet prepared foods and mixes, dinnerware and linens, coffee, and baked items. Plus, Lonon says, “The owners just make you feel so good when you come in. It really is a classy feeling.”

Martha Mae’s Emporium. This shop features nearly 30 vendors selling crafts, antiques, upcycled furniture and decor, clothing, and more. “From a local perspective, I think places like this are good for the economy because it gives small craft producers and small businesspeople the opportunity to have an outlet without the burden of having a whole store,” Lonon says. “That entrepreneurial spirit brings a lot of people together.” 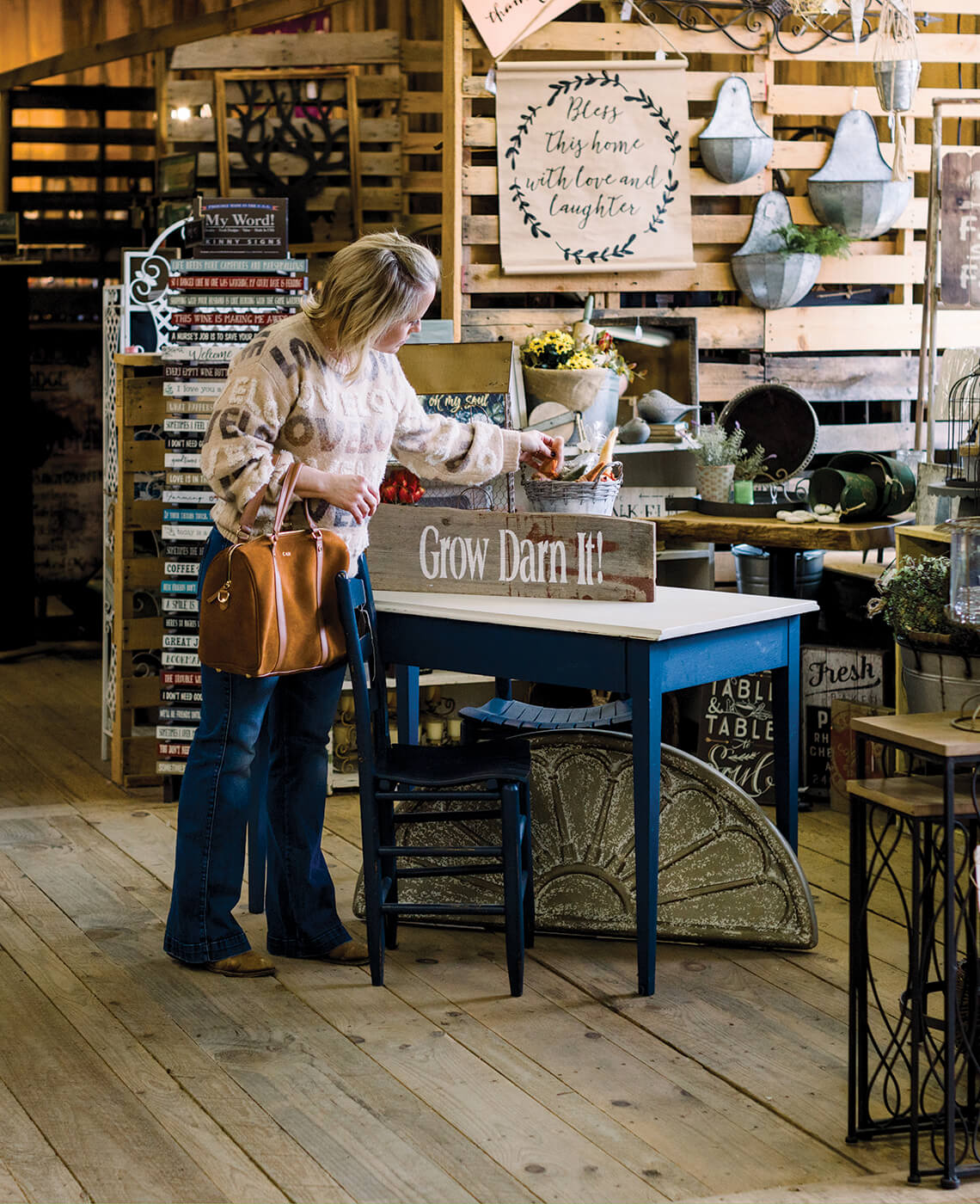 Florence Thomas Art School. After her death, Florence Thomas, a local painting icon, endowed Ashe County with the means to establish an art school. The school offers classes and workshops and has rotating exhibits, including some of the more than 1,000 paintings and drawings that Thomas left behind.

Parkway Theater. Lonon used to take her kids to see Disney movies at this iconic theater — just like families have been doing since it opened in the 1940s. “West Jefferson has done a good job of respecting and preserving the historic integrity of our town and not covering everything up with plaster, and this is the perfect example of that,” Lonon says.

Ashe County Cheese. North Carolina’s oldest cheese plant began in 1930 and is known for its cheese curds, or “squeaky cheese,” West Jefferson resident Jane Lonon says. “You go in and get your sample of squeaky cheese, then find out how cheese is made.” The retail shop offers several specialty foods, like swiss-and-almond and garlic-and-herb cheese spreads. 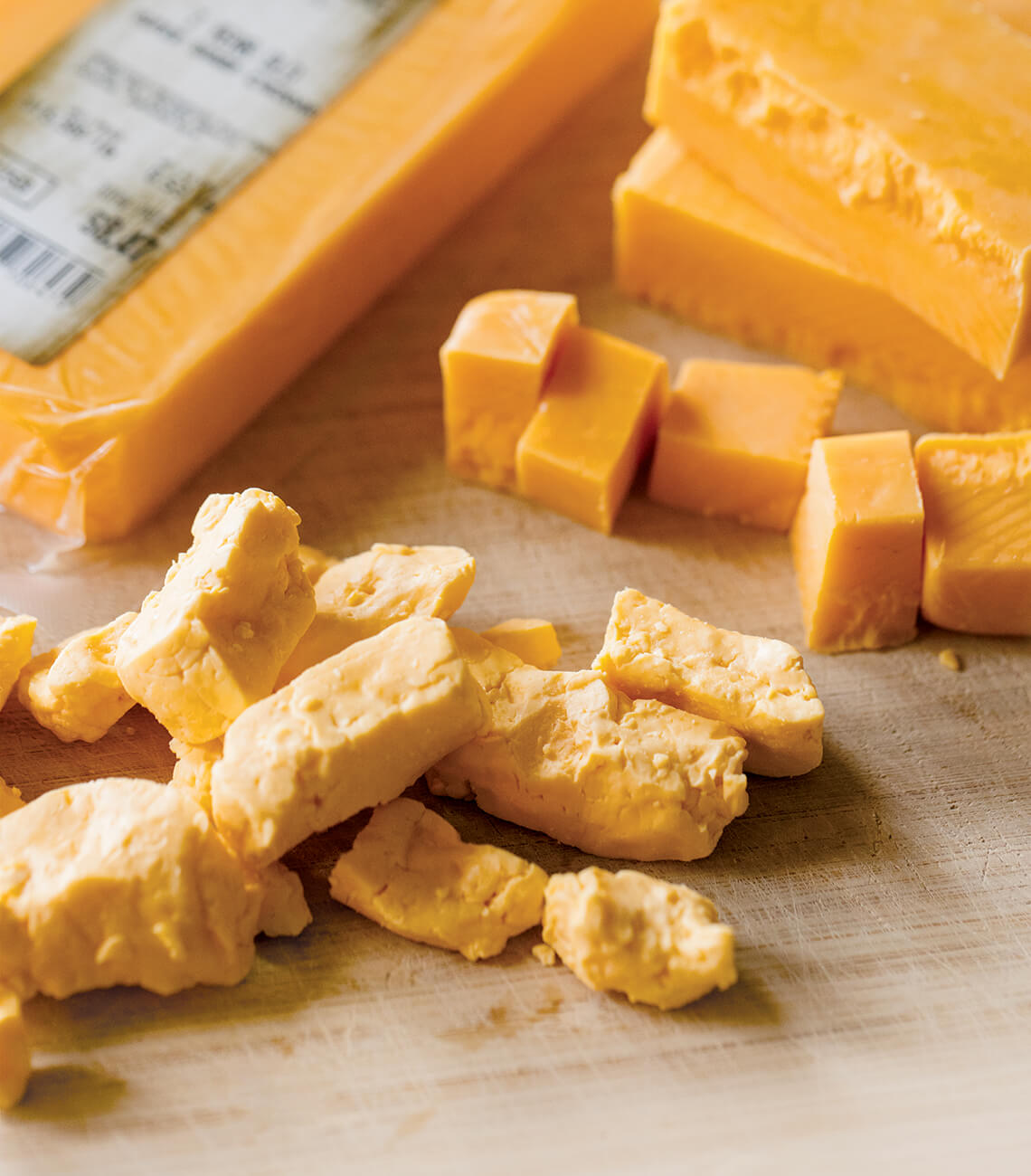 Make sure to try the “squeaky cheese” at Ashe County Cheese. photograph by Revival Creatives

Craft Bistro. Chef and owner Jared Yelton has created a small, intimate dining experience where the menu frequently changes based on what’s fresh. The seared scallops, served with a white chocolate risotto, are the best that Lonon’s ever tasted.

Havana Café. Since 2008, this restaurant has served authentic Cuban food using recipes that have been passed down through generations: picadillo, vaca frita, tostones, and sandwiches made with bread from La Segunda, a century-old Cuban bakery in Florida. 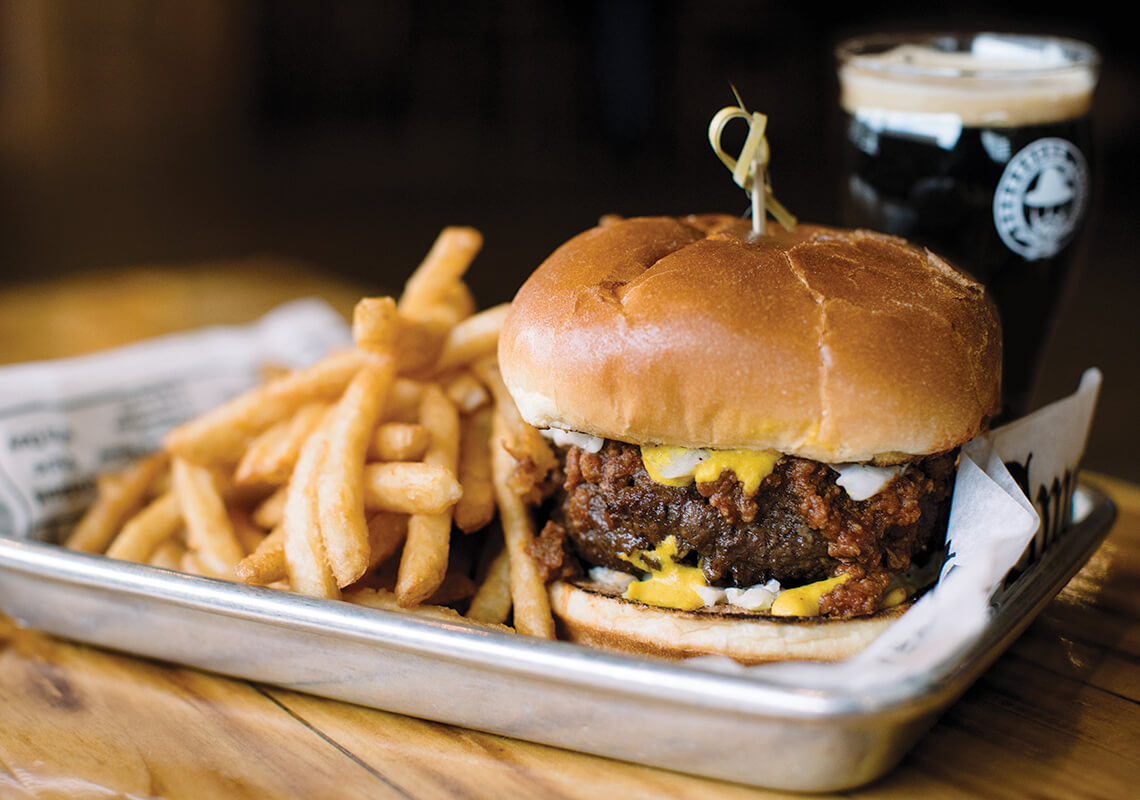 Find local art in every medium at these downtown galleries. 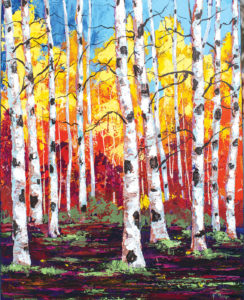