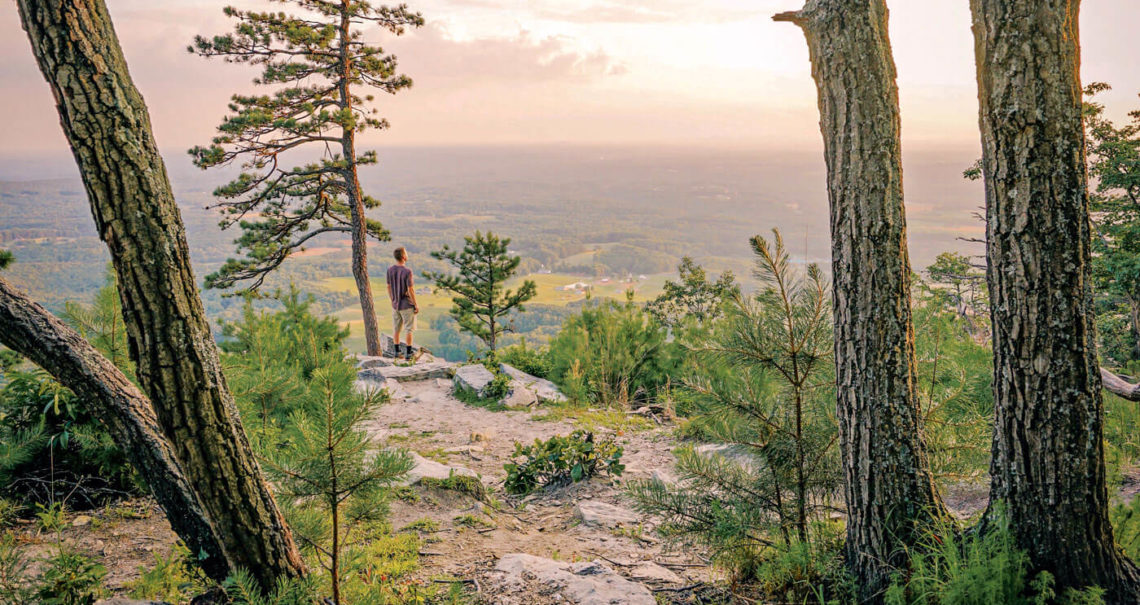 Make a day trip to a park near you or a New Year’s resolution to hike them all! For a printable PDF of our 41 state parks, click here.

This coastal park is home to the Venus flytrap, a carnivorous plant unique to the wetlands of the Carolinas. Located along the Cape Fear River, this secluded area is no less dynamic than the nearby Atlantic.

A historic Rockefeller family vacation home is set among the longleaf pines of this park, whose scenic landscape spans more than 4,000 acres, rich with natural and historical beauty.

Protruding from the mountainous landscape, Chimney Rock is aptly named for its geologic form. And while this granite feature is the main attraction, waterfalls and a wealth of flora and fauna are captivating, too.

Over time, erosion has carved out these 90-foot cliffs that loom above the Neuse River. This land was once occupied by Tuscarora and Saponi tribes, who used the river for travel and the surrounding land as ceremonial grounds and gathering places.

When drilling and excavation in nearby areas threatened the beloved Crowders Mountain, local residents convened to protect it, and this state park was established in 1973.

Once a site of extensive logging, this now-protected land has rebounded. Sixteen miles of trails lead visitors around this hauntingly beautiful landscape, and a 2,000-foot boardwalk ventures into the Great Dismal Swamp itself.

Elk Knob is the only park in the state that offers cross-country skiing during the winter. Dramatic elevation changes create an endurance challenge rewarded by beautiful forests and summit views.

The Eno River is tucked away amid the bustle of Durham and Orange counties, and curves along nearly 30 miles of trails. This Piedmont gem is also home to a historic mill site.

Initially created to control flooding and act as a reservoir for surrounding communities, Falls Lake quickly became a popular spot for outdoor fun. Today, the Mountains-to-Sea Trail weaves in and out of the area, attracting hikers and leisurely walkers.

Catch a glimpse of Loggerhead sea turtles on the protected portions of the area’s oceanfront, or explore the trails that weave through the salt marsh.

Step into Fort Macon’s casemates and immerse yourself in Civil War history. Or venture over to the undisturbed shoreline for a peaceful swim.

Live oaks draped with Spanish moss frame the trails of this park, located in an area once home to the Tuscarora Indians, royal governors, and, later, subsistence farmers.

This rugged landscape was long used for industrial purposes, until conservation efforts began in the late 1970s. Subsequent years of land donation and protection led to the creation of the park, which is now a haven for many rare species.

This park’s namesake rock juts out from the earth like the bow of a large ship, overlooking the wooded lands below. The park is set among the Sauratown Mountains, known as the “mountains away from the mountains” for their distance from the Blue Ridge.

This park is a serene getaway for the Triad region, set along the Haw River with miles of trails for exploring. A boardwalk to the river stretches from the Piedmont Loop Trail, a scenic and short hike through the park.

The steep, sandy slope of the dunes may inspire an urge to tumble all the way down. Many do just that, or opt to hang glide, a more graceful approach to the East Coast’s tallest sand dune. Roanoke Sound meets the park on its inland side, where paddling, sunbathing, and sandy shoreline trails encourage visitors to relax.

The Southeastern United States is home to around 500,000 bays, best described as slight topographical depressions in the Coastal Plains. Jones Lake is one of these features that still contain shallow open water, which invites reptiles, birds, and vegetation to settle in permanently.

Everett Jordan Lake proves itself to be a generous resource for both practical and recreational use. Surrounding communities rely on this 14,000-acre reservoir for its water supply and a host of fun activities on and off the water.

This 50,000-acre reservoir, located along the Virginia state line, is known to Virginians as Buggs Island Lake, after an early settler of the area.

Set at the base of the Blue Ridge Mountains, Lake James has been a hydro- electric power source for Duke Energy since the early 1900s. Fittingly, it was named after the company’s cofounder, James B. Duke.

In addition to North Carolina’s largest man-made lake, this state park also boasts one of the region’s most popular mountain biking networks.

This Carolina bay is home to at least five species on the state’s rare plant list, along with some aquatic species you won’t find anywhere else in the world. A boardwalk trail extends 375 feet into the lake, perfect for taking in the natural surroundings.

True to its name, Lumber River was an 18th-century hotspot for timber harvest and transport. Many communities cropped up along the riverbanks as a result, some of which are still around. The park is now sectioned into three parts: scenic, recreational, and natural, all varying in public accessibility.

Standing just 325 feet above sea level, Medoc Mountain is what remains of a mighty mountain range formed during the Paleozoic Era. Years of withstanding the elements has softened its peak, but up-close exploration reveals still-rugged terrain and steep slopes.

A certain eerie beauty is cast upon this swamp-like environment, where bald cypress trees create winding paths for both turtles and kayaks. The primarily aquatic environment is home to many species of flora and fauna, including two primitive fish species: the longnose gar and the bowfin.

The four major peaks within this park — Morrow, Sugarloaf, Hattaway, and Fall — are all less than 1,000 feet tall. Morrow Mountain has the highest elevation within the park, rising 936 feet.

This mountain, covered in a variety of wildflowers, trees, and shrubs, was once named Panther Mountain, inspired by a local legend. Later, it was renamed in honor of Thomas Jefferson and his father, Peter, who owned and surveyed nearby lands.

The strenuous six-mile hike to the summit of Mount Mitchell, the highest point east of the Mississippi River, rewards those who brave it with spectacular views.

This park encompasses a scenic portion of the New River, which was named a National Wild and Scenic River in 1976. Despite its name, the New River is thought to be one of the oldest rivers in North America, predating the mountains it now winds through.

Keep an eye out for the Brown Elfin, a rare species of butterfly, while strolling this area’s wooded trail. Due to this species’ seasonal presence, researchers believe that the habitats of Occoneechee Mountain have remained largely unchanged since the last Ice Age.

This park encompasses Lake Phelps, an ecologically and archaeologically fascinating site that has witnessed thousands of years of human history. Artifacts like dugout canoes, found sunken in the lake’s shallow water, provide insight into the past.

The protruding form of Pilot Mountain has long been a landmark for travelers. When the Saura Indians lived in the region, they used it as the “Great Guide” or “Pilot.”

Rising 150 feet above the Cape Fear River, the impressive Raven Rock was named for the, yes, ravens that once roosted atop it. Many other unique rocky features are seen throughout the park, too.

Carolina bays are known to be shallow, and at just 11.8 feet deep, Singletary Lake, surrounded by old cypress trees, currently holds the title for the deepest bay lake in North Carolina.

This area was once the site of a gold rush when the mineral was found at Brindle Creek in 1828. Today, there are hikers instead of miners. The park’s beautiful landscape includes elevations up to 3,000 feet, as well as an impressive 80-foot waterfall.

The center of this 14,000-acre park is Stone Mountain, a bald-faced dome. A restored mountain farm stands on the land below, welcoming visitors to delve into the lives of the area’s early settlers.

The longleaf pine forests of this area once spanned across the Southeast. Although the longleaf population has dwindled, this preserve provides a window into the landscape and ecology of the past

Established in the wake of poor farming practices and the onset of the Great Depression, this land was purchased by the Resettlement Administration to create a public recreational area. Now bordered by Raleigh’s bustling highways, this surprisingly serene land is a perfect way for city dwellers to get outside without going far.