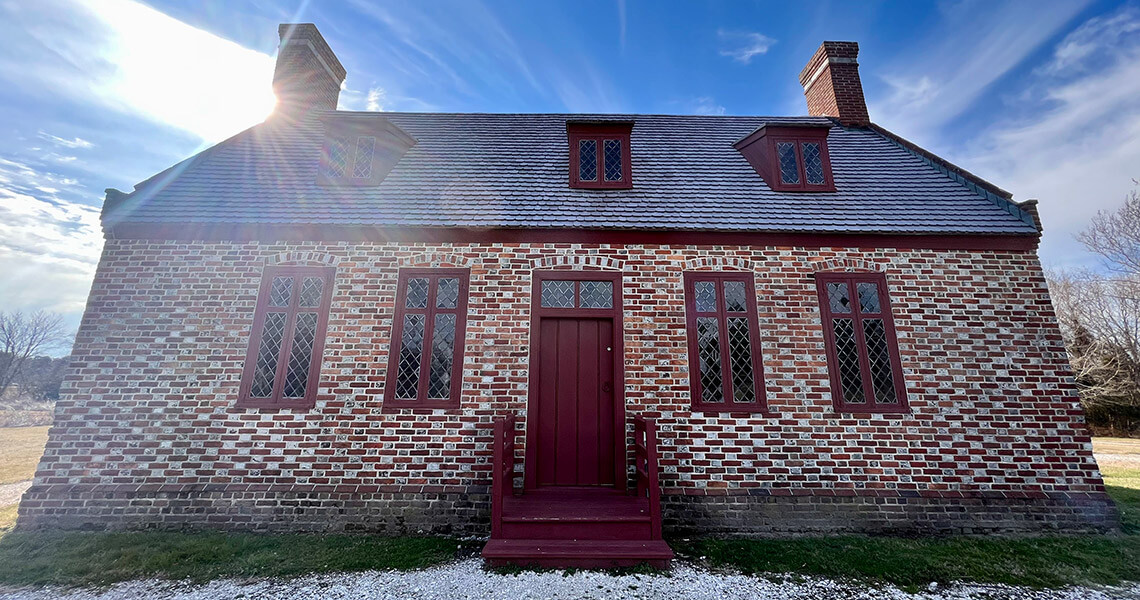 As the cheery red door of Sugar Chic Boutique 1111 in Hertford, once Gregory’s Five and Dime, swings open, an employee asks warmly, “Where are you folks from?”

A few stores down, a shopkeeper suggests stopping into Woodard’s Pharmacy, a local fixture since the early ’70s, for a heaping scoop of ice cream. “Everyone around here is super friendly and wants to give you all the recommendations,” says Stacey Layden, Perquimans County Tourism director.

From its location on the north side of the Albemarle Sound, Perquimans County exudes a peaceful, easy feeling. With a county seat — Hertford — whose downtown is full of historic buildings and landmarks that hint at the region’s rich Indigenous, Colonial, and Quaker past, the region is the ideal destination for history lovers longing to step back in time.

Read on for the ultimate history lover’s guide to exploring, dining, and shopping in Perquimans County.

You’ve heard that the South is known for its hospitality. We believe it may have taken a lesson or two from Springfield Bed and Breakfast. 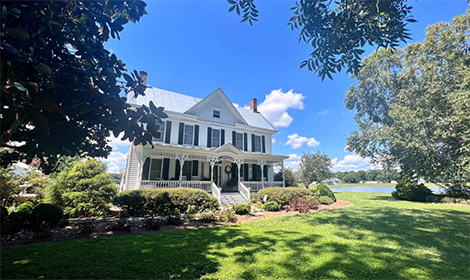 Don’t let the small size of Hertford’s Perquimans County History Museum deceive you; the whole of this modest museum is greater than the sum of its parts.

Exhibits cover more than 400 years of history, including artifacts from the Yeopim tribe, inhabitants here long before Europeans began settling along the Perquimans River in the late 1600s.

It’s a place where you can try to lift a weighty wooden mallet that once pounded wedges to split logs. Then you can feel the worn-smooth, pestle-like tool that ground corn to meal in a “bowl” carved out of a four-foot chunk of tree and turn the pages of a register from a tavern where travelers stopped from 1762 to 1915, just down the street.

The collection wouldn’t be complete without an exhibit on Jim “Catfish” Hunter, a native son and former Major League Baseball player. “The exhibit is a favorite for sports fans of all ages,” says Layden, who manages the museum. 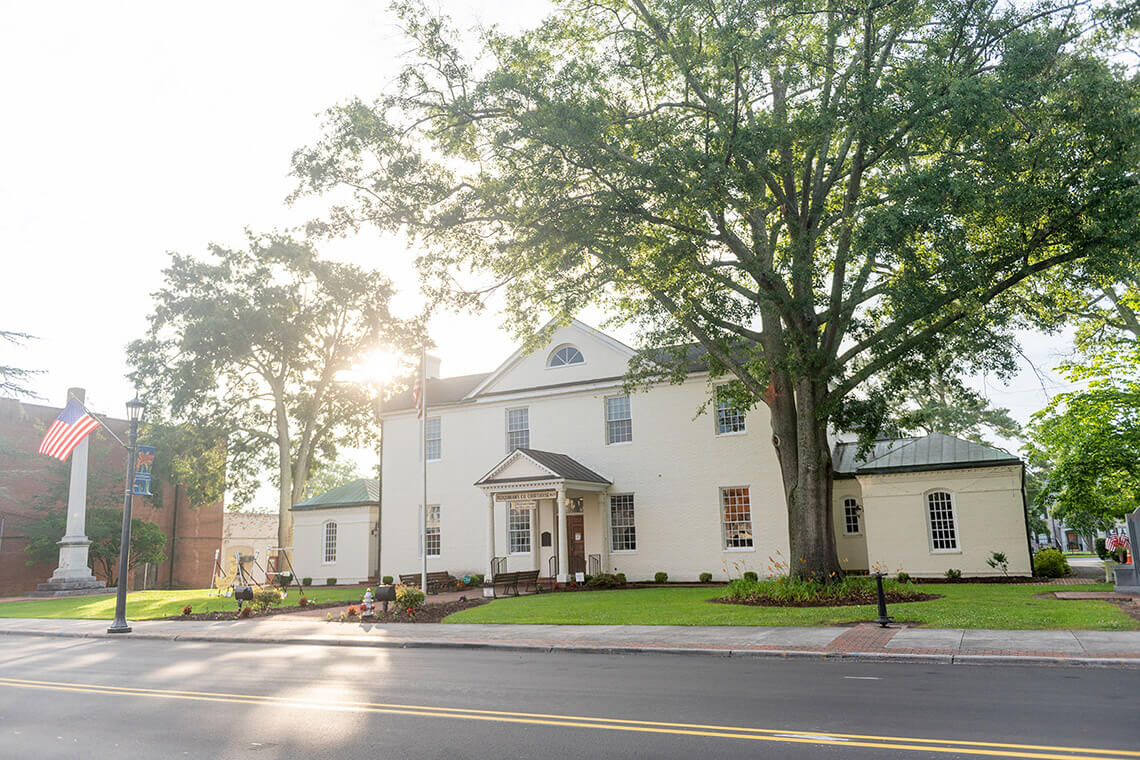 The Perquimans County Courthouse was built in 1825. photograph by Missy Loves Jerry Photography

Before you leave the museum, pick up a map of downtown, an area that’s listed on the National Register of Historic Places. Then take a walking tour to learn more about the 17th- through mid-20th-century architecture. Be on the lookout for these local-favorite points of interest:

On Punch Alley, the Creecy-Skinner-Whedbee House was built circa 1775. This two-story, Federal-Style house is believed to be the oldest surviving house in Hertford.

Many Colonial Revival homes line the streets, but the Thomas Nixon House (c. 1917), with its striking portico, is the only example of a Neoclassical Revival home in town.

Admire the Matthew H. White House (c. 1893) on Grubb Street, a yellow home with a wraparound porch and decorative embellishments of the Queen Anne style, popular with prosperous businessmen in the late 1800s. 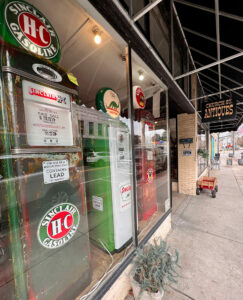 Today’s Church Street businesses still inhabit commercial buildings from the mid-1800s to the mid-1900s. One such building, the brick W.R. Shannonhouse Building (c. 1895), with arched windows and corbelled cornices, originally housed two general stores and a grocery. Next door, fluted Ionic columns line the façade of the 1916 Farmers National Bank of Hertford.

Across the street on the grassy lawn dotted with old oaks stands the Perquimans County Courthouse. Built in 1825, the stark white, Federal-era building is the state’s oldest standing courthouse in continuous use. Inside is the oldest land deed in the state — the first documented transaction in which a settler paid a Native American for land.

Known for their pacifism, the Religious Society of Friends, or Quakers, have deep roots in Perquimans County. Ten miles northwest of downtown Hertford, you can visit the modest church where the oldest congregation in the state still meets in the town of Belvidere.

In Hertford, the unassuming Edmundson-Fox Memorial commemorates the state’s first religious services. William Edmundson drew settlers to his first Friends’ meeting under a grove of towering cypress on the Perquimans Riverbank in March 1672, and later that year, founder George Fox held meetings at the homes of area residents. Both exposed colonists to the relatively new religion that quickly took hold in the area.

To see the very land where one of Fox’s early meetings occurred, stop by the nearby Newbold-White House, one of the oldest colonial homes in North Carolina. The Quaker couple Abraham and Judith Sanders built their home here in 1730, and today you can wander through the restored four-room house where they lived with six children and four enslaved people. The garden out back blooms with herbs and other plants once used to make dyes and medicine. From here, a trail leads to the wide Perquimans River, the only avenue for transportation when the home was built. 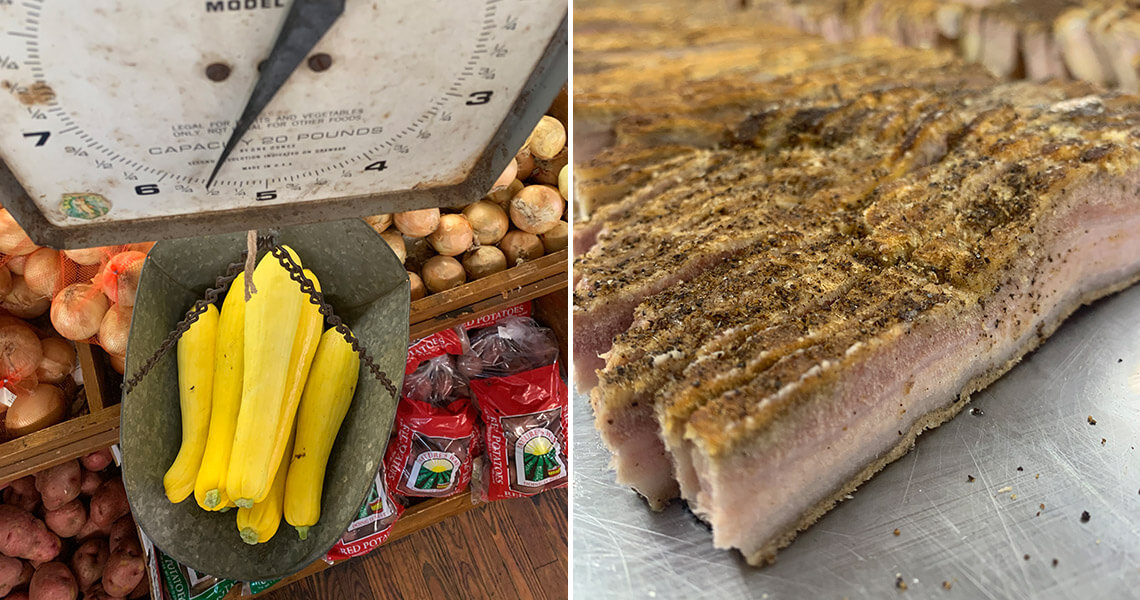 Layden’s Country Store has stood in the same place for 175 years. Photography courtesy of Visit Perquimans

Shops with a Past

Whether you need a quick snack or supplies for your weekend getaway, Layden’s Country Store in Belvidere is a must-visit.

Inside this quaint supermarket, you’ll find vestiges of earlier times — from the metal produce scale to the weathered wooden floors to the hoop cheese and sausage made in-house. The smell of aged hams and meats hanging along the wall of the busy butcher counter permeates the shop as you pick out old-fashioned candy and a bottle of Nehi Grape soda for the ride home. 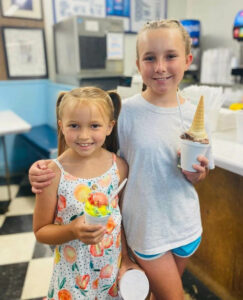 History lovers may appreciate Layden’s backstory even more than its selection and hospitality: Not only has a mercantile business operated on this same corner of Belvidere and Perry’s Bridge roads for 175 years, but locals say the store also served as the first post office in town for a stretch after the Civil War.

Back in Hertford, Woodard’s Pharmacy is the place to go for ice cream. Sample delicious flavors like salted caramel cheesecake in this building that has operated as a pharmacy since it was built in 1911. Plan to stop by around lunchtime; Woodard’s counter serves grilled ham and cheese — pressed thin, to buttery perfection.

Sandwiched between Edenton and the Great Dismal Swamp, the cypress-lined creeks and rivers of Perquimans County show the landscape in its original, untouched state. “For those who want to see the natural shoreline and experience the swamp, Hertford is the place to do it,” Ivey says. 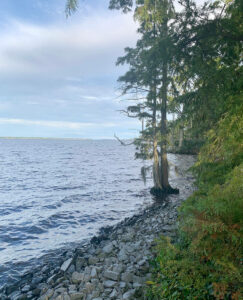 See the Perquimans River from its cypress-line shore. Photography courtesy of Visit Perquimans

As you paddle down the same rivers once navigated by Native American tribes and, later, “maroons,” or those escaping slavery, you can imagine communities on islands deep within the dense and difficult-to-traverse swamp. “Paddling some of the deep creeks at times of the day with the sun streaming in at a certain angle makes a wonderful backdrop for the story about the maroons,” Ivey says.

The Perquimans River also inspired “Carolina Moon,” the crooners’ standard written by Benny Davis and Joe Burke in the 1920s after viewing a moon rise over the serene stretch of water. The hit was recorded many times through the years by the likes of Perry Como and Dean Martin, with Thelonious Monk putting his jazzy spin on it in 1956.

At the end of the day, if you, too, have the chance to catch the moon rising over the river, you might feel the same yearning captured in the song those many years ago:

Oh, Carolina Moon keep shining,
shining on the one who waits for me.
Carolina Moon, I’m pining,
pining for the place I long to be.