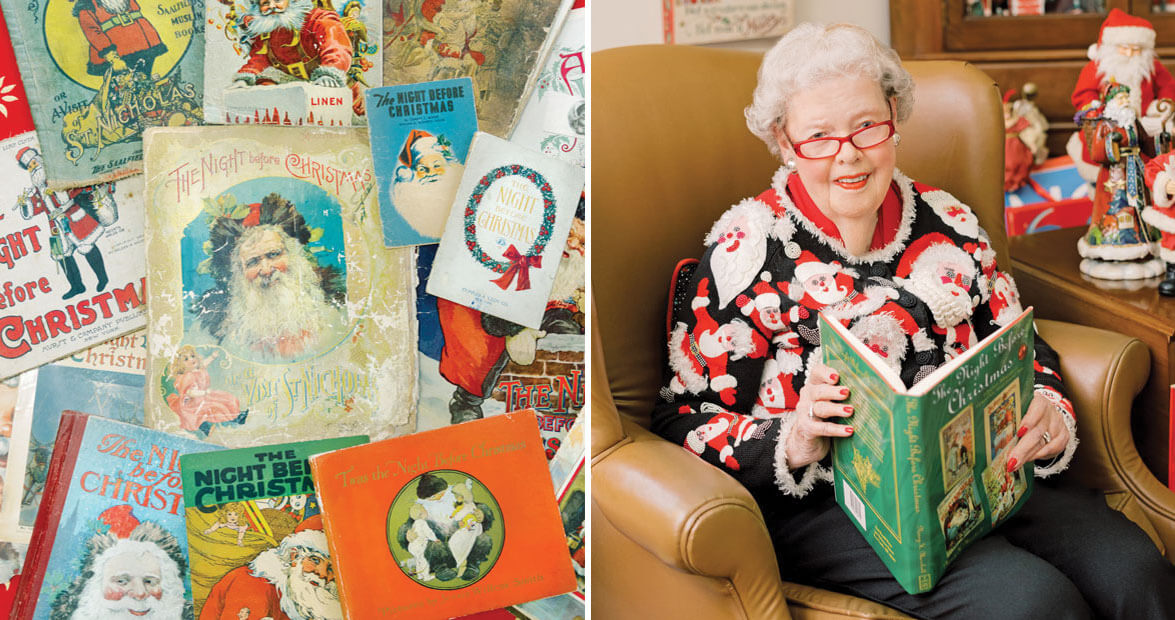 linor D. Hawkins’s remarkable 92-year-old complexion puts her closer to 70. But a youthful countenance isn’t the only remarkable aspect of “Miss Elinor,” as many affectionately call her. In her home in Cove City, in boxes and crates, on shelves and tables, in Ziploc bags and envelopes, and between thin layers of tissue like the ones your grandmother used to pack away clothing for the season, are more than 1,000 copies of Clement Clarke Moore’s classic holiday poem, most commonly known as “The Night Before Christmas.” This is no Guinness World Records attempt, though, nor a hoarder’s compulsion. Hawkins’s important archive is destined for the Rare Book Collection at the University of North Carolina at Chapel Hill, where, in 1949, she entered the School of Library Science.

No accident, that. She had wanted to be a librarian since sixth grade. On her first day of classes at Carolina, a professor gave an assignment: “Choose a book to collect for the rest of your life and write a paper on why.” Hawkins selected “The Night Before Christmas” because her mother read the poem aloud to her every Christmas Eve, and, “I decided it was a tradition I needed to share,” she says. The day the paper was due, she went straight to The Intimate Bookshop on Franklin Street and bought the first edition of that year, which came out then, as now, in September. Unwittingly, a collection — and a tireless seeker — had been born.

Shortly after graduation, Hawkins started North Carolina’s first televised children’s show, Telestory Time, in which she read stories aloud on WFMY in Greensboro. In 1963, she took the show to WCTI in New Bern, where, all these 56 years later, Miss Elinor is still reading stories aloud, and Telestory Time is now considered the longest-running children’s TV show in the world. A librarian for 42 of those years, Hawkins is responsible for the creation of eight libraries in eastern North Carolina.

In 2012, she joined the ranks of Maya Angelou, Andy Griffith, and Michael Jordan in being awarded North Carolina’s most prestigious civilian honor, The Order of the Long Leaf Pine, for her contributions and dedication to the state.

Hawkins, surrounded by Christmas decorations of every size and description — Santas, snow globes, sleds — is wearing, naturally, a sweater with candy cane appliqués. It goes without saying that she knows the history behind “The Night Before Christmas,” but if you’re fuzzy on its origin, Moore, a professor of Greek literature at the General Theological Seminary in New York City, composed the poem — untitled — as a gift to read aloud to his daughters on Christmas Eve in 1822. A visiting cousin from Troy, New York, took home a copy of the poem, submitted it to the Troy Sentinel, and, on December 23, 1823, the newspaper published it under the title “Account of a Visit from St. Nicholas.” The author, however, was anonymous. For years, other newspapers, almanacs, and magazines followed suit with the popular poem, also without authorship or copyright. In 1844, Moore published it in a book of his poetry. Mystery solved, history made. 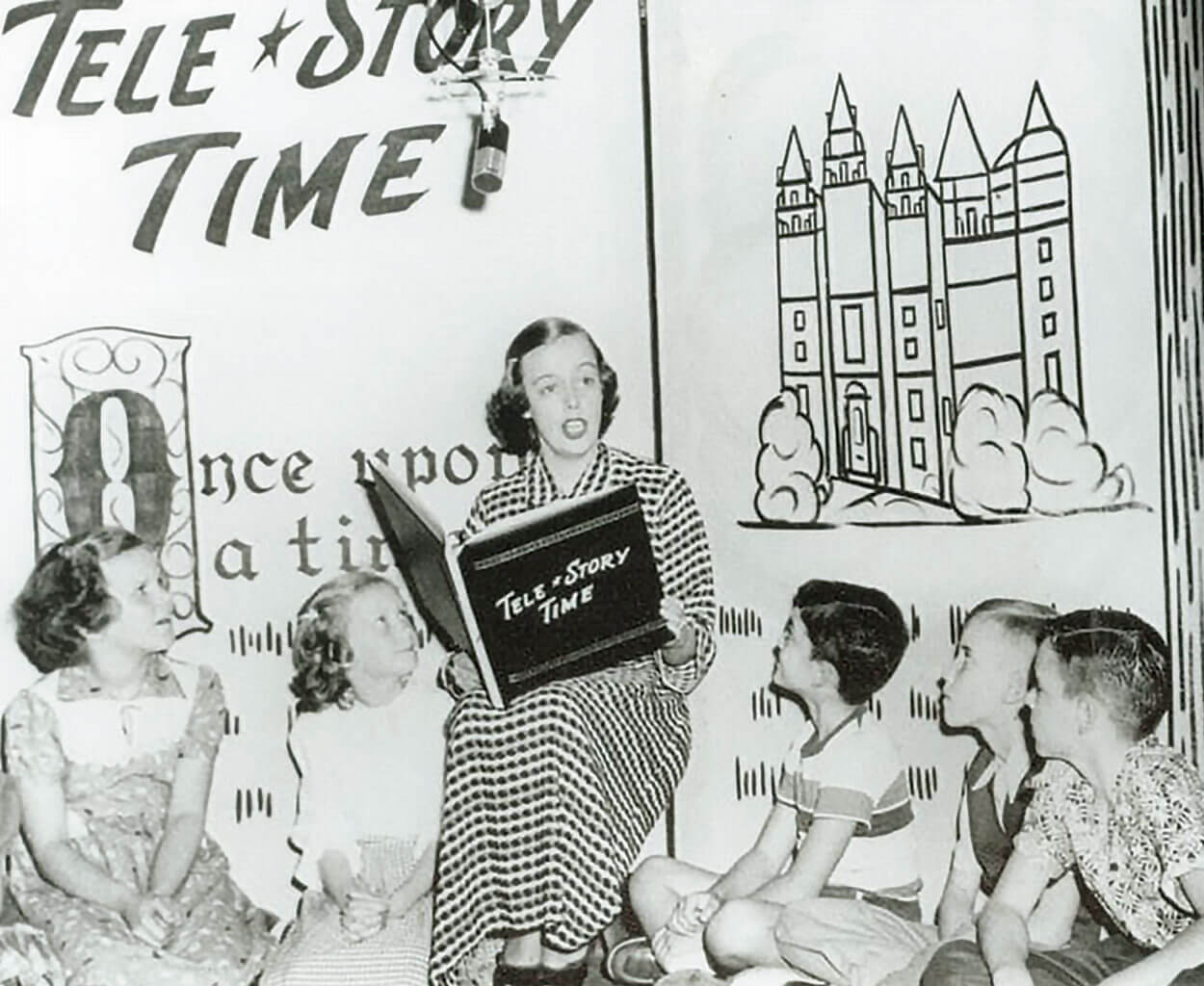 Hawkins launched the state’s first children’s television show on WFMY in Greensboro in 1952; to this day, she reads books to children on the show, Telestory Time, which has aired on WCTI in New Bern since 1963. photograph by The New Bern Sun Journal

“My goal was to find all the editions, to represent every year since its publication in 1823,” Hawkins says. She’s still missing a few years, but not for lack of trying to find them. With an iPad at her side, she’s a whiz at Internet searching, bidding, and buying. And the sheer variety of her collection surely compensates for any gaps: An edition in Braille. Editions in foreign languages. An edition the size of your thumbnail, bound in leather and kept under Plexiglas, given to her by her sister. A first-edition sheet of stamps from 1972. (“I went out and bought all they had so I could use them on my letters year-round,” Hawkins says.) An edition in American Sign Language. A fragile edition in limp muslin fabric, its delicate dyes faded. Even some parodies. And nearly every one has a story — a provenance, if you will.

“She lovingly turned the pages, reading it aloud, and then said, ‘I’d like you to have it.’”

Take that unusual fabric edition. When Miss Elinor and her husband, Carroll, traveled, all she wanted to do was go to used bookstores. “I’ve been to them in grocery stores, in filling stations. Carroll would drop me off,” she says. On one such visit to The Book Mart in Biltmore Village in the ’50s, Hawkins was told by Nancy Brown, the owner, that she had no children’s books. “That’s OK,” Hawkins said. “I’ll just browse NC history until my husband returns.” An hour later, after Hawkins herself had begun helping customers find particular volumes, a small miracle took place. Brown invited Hawkins to her office behind a padlocked gate, opened a desk drawer, and, from beneath a stack of old Mother Goose books, retrieved a tattered copy of “A Visit from St. Nicholas.”

“She lovingly turned the pages, reading it aloud,” Hawkins says, “and then said, ‘This is my book that I grew up with, and because you’ve told me yours is a very serious collection, I’d like you to have it.’” 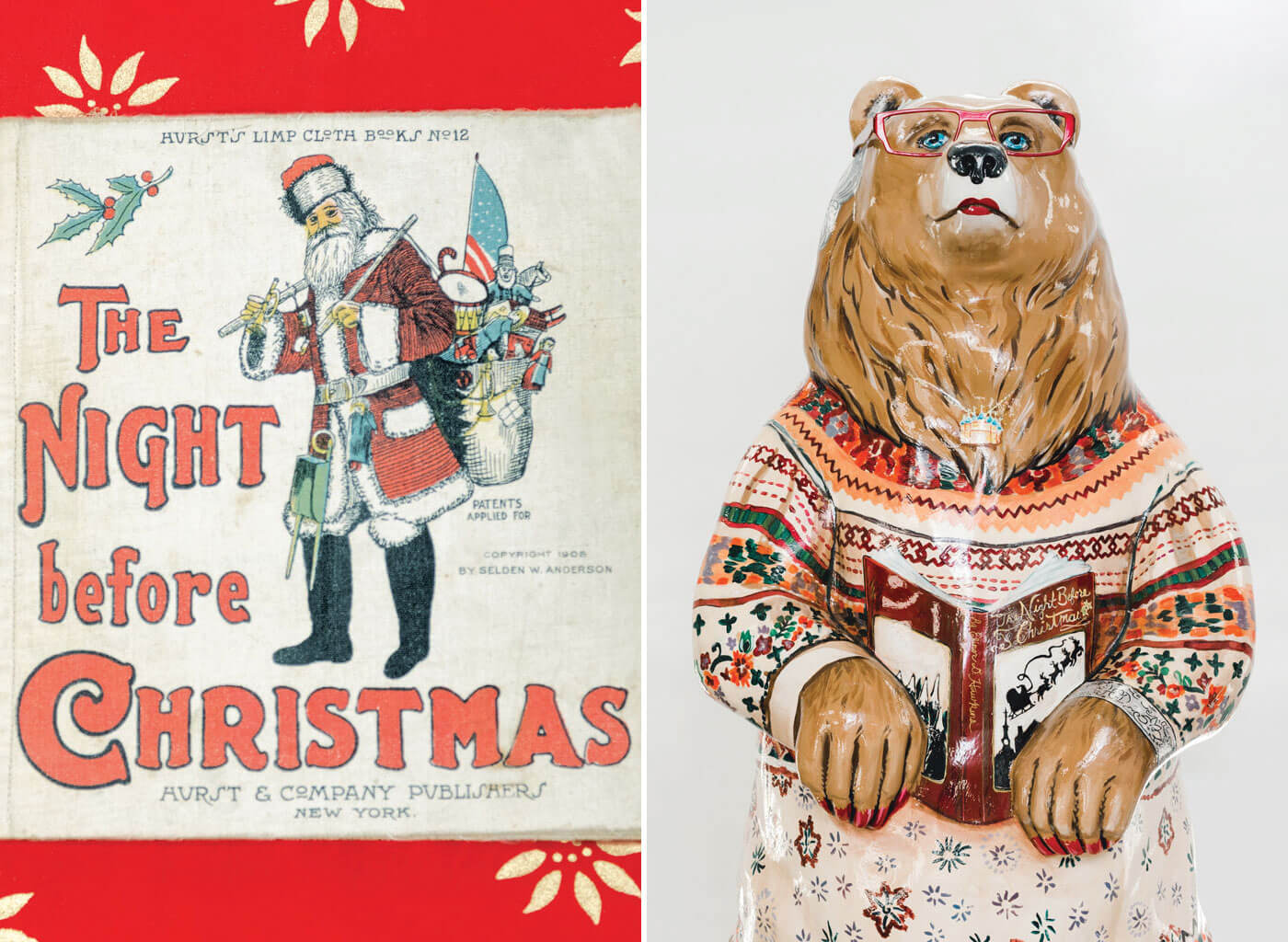 Hawkins’s goal was to collect all the editions that she could find, from the first published copy in 1823. This fabric edition was issued by Hurst in 1908. In 2018, New Bern honored Hawkins with one of its famous bear statues (right). photographs by Faith Teasley

For another edition, Hawkins sent her son, John, then a freshman at UNC Chapel Hill, to a rare book auction. “I was this 18-year-old kid in there with a bunch of rare book collectors,” John recalls. “I had no idea what I was doing, but I just kept bidding until I got it.” With a copyright still rendered in Roman numerals, the book is illustrated by English artist Arthur Rackham. Because Hawkins not only looks for certain years; she looks for specific illustrators. After all, the poem’s wording doesn’t change, but how it looks does. Each illustrator has a different take on the classic verse.

Hawkins’s sentimental favorite remains the one that her mother read aloud to her, illustrated by Fern Bisel Peat, from 1933. Hawkins read it to John each Christmas Eve, and now she reads it to John’s children as well, creating a four-generation tradition.

When is a poem not just a poem? When it’s a read-aloud annual tradition. When it embodies the spirit of a holiday. When it’s the basis for a lifetime dedicated to searching. You have a copy of “The Night Before Christmas” on a shelf, too. Pull it down and look for the three idiosyncrasies that interest Hawkins: Does it read “Happy Christmas to all” or “Merry Christmas to all”? (Miss Elinor prefers the former.) Is the reindeer named “Donder,” as in the original, or “Donner,” as is now common? Has the illustrator drawn “children snug in their beds” (plural) or slumbering in one large bed?

Here is my version: Three children are snug in one bed piled high with patchwork quilts. A trio of tiny angels floats above their heads. Delicate, finely etched as woodcuts, the illustrations are by Arthur Rackham. My slender 1983 edition, with its yellowing, Scotch-taped cover, is the same edition that John Hawkins bid on for his mother decades ago.

When is a poem not just a poem? When it embodies the spirit of a holiday.

Long after Elinor Hawkins’s astounding collection leaves Cove City for Chapel Hill, her devotion to “The Night Before Christmas” will continue. Every Christmas Eve, the poem is read aloud at Trinity Church in New York City at the Clement Clarke Moore Candlelight Carol Service. Moore, once a parishioner, is buried in the church’s cemetery. Beginning in 2017, the wreath laid on his grave was given in honor of Elinor Hawkins, and  it will continue to be for 50 years into the future.

Moore’s 56-line verse, with its cheerful, charming narrative and simple rhyme scheme, has become, in its nearly 200-year history, the foundation for countless toasts, roasts, farewells, and congratulations, from weddings to retirements.

And, of course, it’s read on Christmas Eve. Miss Elinor knows how it goes, 1,000 times over: “’Twas the night before Christmas …”

You can surely take it from there.